The present study was designed to evaluate antidiabetic effects of ethanolic extract of Semecarpus anacardium (SA) stem barks in normal and alloxan induced diabetes rats. The antidiabetic effect of extract was evaluated investigated by measuring fasting blood glucose level and oral glucose tolerance test (OGTT) in normal and alloxan induced diabetes animal models. Here metformin (150 mg/kg) was used as reference drugs for comparison. The extract significantly (P<0.05) reduced blood sugar level in alloxan induced diabetic (hyperglycaemic) and glucose induced hyperglycemic (normo-hyperglycaemic) rats when given orally at doses of  200 mg/kg and 400 mg/kg body weight respectively. The glucose tolerance results showed the ethanolic extract significantly improved 55% and 68% at the dose of 200 mg/kg and 400 mg/kg body weight (b. wt.) whereas metformin showed 80% of that. The phytochemical screening of the plant S. anacardium stem bark showed the presence of steroids, triterpenoids, flavonoids, glycosides, saponins and tannins.  However a glucose tolerance hypoglycemic test is comparable to diabetic control group and effect is a dose dependent. The findings of this experimental animal study indicate that S. anacardium stem-bark ethanolic extract possesses antidiabetic properties; and thus lend pharmacological credence to folkloric; ethnomedical uses of the plant in the treatment and/or management type 2 diabetes mellitus.

INTRODUCTION:Diabetes mellitus (DM), a major metabolic disorder in the endocrine system, is characterized by elevated blood glucose levels, alterations in carbohydrate, lipid and protein metabolism. It is becoming the third “killer” of mankind after cancer and cardiovascular diseases, because of its high prevalence, morbidity and mortality 1.

The chronic hyperglycemia of diabetes is associated with long term damage, dysfunction and failure of various organs 2. The oral glucose tolerance test (OGTT) measures the body's ability to use a type of sugar, called glucose, which is the body's main source of energy. OGTT, a test of immense value and sentiment, in favor of using fasting plasma glucose concentration alone was seen as a practical attempt to simplify and facilitate the diagnosis of diabetes. Most commonly employed oral hypoglycemic agents are sulfonylureas and biguanides.

These drugs however, have disadvantages such as primary and secondary failure of efficacy as well as the potential for induction of severe hypoglycemia3.  Despite the introduction of hypoglycemic agents from natural and synthetic sources, diabetes and its secondary complications continue to be a major medical problem in the world population.  There is a need, therefore for new compounds that may effectively reduce insulin resistance or potentiate insulin action in genetically diabetic or obese individuals.  The search for such drugs with a potential to reduce long-term complications of diabetes is, therefore of current interest.

In developing countries, 80% populations are using traditional medicine in primary medical problems 5. The discovery of the widely used hypoglycemic drug, metformin came from the traditional approach through the use of Galega officinalis 6.

Semecarpus anacardium (L.) is commonly known as Beula (Bangla), Bhallataka (Sanskrit), or Marking nut tree (English), belongs to the family Anacardiaceae. In traditional medicine, it is used in the treatment of gout, rheumatic pain and cancer 7. It has documented to possess anti-arthritic 7,Immunomodulatory and anti-inflammatory 8, antioxidant 9 as well as anticancer activity 10.

Phytochemical studies revealed the presence of phenolic compounds as carbolic acid derivatives, bhilawanols, sterols, glycosides, bhilawanols, anacardic acid 11. It also has reported anacardoside, flavonoid and biflavonoid compounds isolated from this plant 12-14. The nut of this plant has been reported on hypoglycemic and antihyperglycemic 15 antitumor 16 and hypocholesterolemic activity 17.

Collection of Plant Materials: Fresh stem barks of the plant Semecarpus anacardium Linn. was collected from Madhupur forests, Tangail District during March-April in 2009 and the plant authenticity was confirmed from the Bangladesh National Herbarium, Dhaka.

Preparation of Plant Extract: The collected stem barks were washed and sun dried under shadow for several days.  The dried stem barks were powdered in an electrical grinder after overnight drying in an oven below 50°C.  The powdered plant barks were extracted with 96% ethanol at room temperature.  The bottle were kept at room temperature and allowed to stand for several 7-10 days with occasional shaking and stirring.

The extracts thus obtained were filtered through cotton and then through filter paper (Whatman Fitter Paper No. 1).  The filtrate was defatted with petroleum ether for several times.  Then, the defatted liquor was allowed to evaporate using rotary evaporator at temperature 40-45°C.  Finally, a highly concentrated ethanol extract were obtained and kept in desiccators to dry to give a solid mass (Yield 15g of extract from 800 g of plant powder material).

Experimental Animals: Eight weeks Long Evans rats (160-180g) of either sex were purchased from ICDDR, Dhaka, Bangladesh and were housed in animals cages under standard environmental conditions (22-25°C, humidity 60-70%, 12 h light: 12 h dark cycle).  The rats were fed with standard pellet diet obtained from ICDDR, Dhaka and water ad libitum. The animals used in this study were cared in accordance with the guidelines on animal experimentation of our institute.

Induction of Diabetes: After fasting 16h, diabetes was induced into rats by in intra-peritoneal injection (i. p.) of alloxan monohydrade (100 mg/kg), dissolved in saline (100 ml/rat, ip.).  After 48h, plasma glucose levels were measured by glucometer (Bioland, Germany) using a blood sample from tail-vein of rat.  Rats with blood sugar level higher than 11.5-13.5 mmol/l are considered as moderate diabetic.

After fasting for overnight, a baseline blood glucose level was estimated (0 minutes). Without delay, a glucose solution (2 gm/kg body weight) was administered by gavage. At the same time standard drug and plant extracts were administered orally to the respective animal groups.  Four more blood samples were taken at 30, 60, 90, 120 minutes after glucose administration and blood glucose level was estimated in all the experiments by using glucometer (Bioland-423, Germany).

Phytochemical Screening Tests: Phytochemical tests have been performed according to the literature by Nayak and Pereira18.

RESULTS: The effect of the ethanolic extract of S. anacardium on the fasting blood glucose tolerance was investigated in normal and alloxan-induced diabetic rats using metformin HCl as standard antidiabetic agent.

Antidiabetic activity of SAextract on normal and alloxan induced diabetic rats: The mean blood glucose concentration of control and different doses of S. anacardium extract treated animals were estimated on 0, 2, 6, 16, 24 hours respectively as shown in figure 1.  In case of alloxan induced diabetic rats metformin reduced blood glucose level were significantly   compared to diabetic control rats.  The blood sugar levels in rats of Group DSA100, Group DSA 200 and Group DSA 400 were lowered after 2, 6, 16, 24 hours of treatment and the effects were dose-dependent.  Group DSA 200 and Group DSA 400 rats showed significant glucose lowering efficacy between hours 2-16 and were comparable to group diabetic standard. 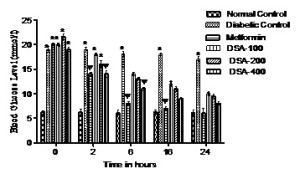 For oral glucose tolerance test, the blood samples were analyzed for glucose content at 0, 30 60, 90, 120 minutes, respectively. The blood sugar levels of Group DSA 200 and Group DSA 400 were lowered significantly (p<0.05) were comparable to diabetic control and the effects were dose-dependent. 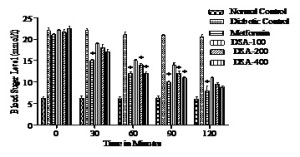 The effect of S. anacardium extract in glucose induced hyperglycemia in normal rats shown in figure 3. The blood samples were analyzed for glucose content at 0, 30 60, 90, 120 minutes, respectively. The blood sugar were reduced in Group SA 200 and Group SA 400 significantly (p<0.05) and were comparable to normal rats and the effects were dose-dependent. The glucose tolerance results showed the ethanolic extract significantly improved 55% and 68% at the dose of 200 mg/kg and 400 mg/kg body weight (b. wt.) whereas metformin showed 80% of that (Fig. 2).  It was found that extract have also hypoglycemic effect in glucose induced hyperglycemic rats. 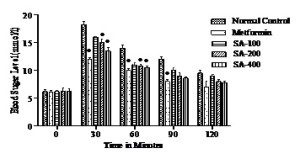 Phytochemical Screening: The phytochemical analyses of crude extract revealed the presence of flavonoid, saponin, tannins and triterpenoids. The results are summarized in Table 1.

DISCUSSION: Diabetes mellitus (DM) is a metabolic syndrome with multiple etiology, is characterized by chronic hyperglycemia together with disturbances in carbohydrate, protein and fat metabolism results from a decrease in circulating concentration of insulin (insulin deficiency), a decrease in the response of peripheral tissues to insulin (insulin resistance) or both.  Hyperglycemia is an important factor in the development and progression of long-term complications of DM affecting kidney, retina, heart and nervous system 19.

A number of indigenous medicinal plants have been found to be useful to manage diabetes.  The hypoglycemic activity of many plants has been confirmed in hundreds of studies in experimental animals and several studies in diabetic patients.  In Bangladesh, although a large number of medicinal plants have been tested for their anti-diabetic and analgesic activity, many remain to be scientifically established.

The experiment showed that Oral Glucose Tolerance Test (OGTT) measures the body ability to use glucose, the body’s main source of energy 20. This test can be used to diagnose prediabetes and diabetes. We made an attempt for the first time to study the effect of S. anacardium ethanolic extract in hyperglycemic rats. Glucose lowering effects were found after oral administration of ethanolic extract in normal and alloxan induced diabetic rats (Fig. 2 and Fig. 3).

The ethanol extract of the plant barks exhibited significant antihyperglycemic activity in alloxan-induced diabetic rats, and the activity was comparable to that of the standard antidiabetic drug, metformin (150mg/kg bw, op.).  The effect of extract on blood sugar levels was dose-dependent.  Group SA 200 and Group SA 400 rats showed significant glucose lowering efficacy after the treatment period.  Further, in glucose tolerance test, rats treated with extract in Groups SA 200 and SA 400 showed a significant decrease in blood glucose concentration and the pronounced effect was observed with Group SA 400 and comparable to the effects of Group Diabetic standard. The glucose tolerance results showed the ethanolic extract significantly improved 55% and 68% at the dose of 200 mg/kg and 400 mg/kg body weight (b. wt.) whereas metformin showed 80% of that.

The extract may have the properties to stimulate or regenerate the ß-cells of islets of langerhans for the secretion of insulin and are most effective for controlling diabetes by various mechanisms which may finally lead to improvement of carbohydrate metabolizing enzymes towards the re-establishment of normal blood glucose level. In our study, it is found that extract have also hypoglycemic effect in glucose induced hyperglycemic rats. The ethanolic extract of plant enhanced glucose utilization.

So the blood glucose level was significantly reduced in the glucose loaded rats (Fig. 3). This may be due to the presence of hypoglycemic saponins, tannins, triterpenes, and flavonoids etc., (Table 1). The hypoglycemic effects have resulted from the antioxidant effect of the ethanolic extract of S. anacardium, whose phytochemical components include flavonoid, which is known for antioxidant effect 21. Further studies are necessary to identify the hypoglycemic mechanism of the active principles in S. anacardium.

The present investigation established that the stem barks of the plant S. anacardium have anti-diabetic activities.  However, further studies were warranted, to observe their effects on diabetic model and to find out the exact mechanism of such action and to isolate bioactive compounds responsible for observed activities.

CONCLUSION: The present investigation established that the stem barks of the plant S. anacardium have anti-diabetic activities. This may be due to the presence of hypoglycemic saponins, triterpines, flavonoids and tannins. However, further experiments were required to isolate bioactive compounds responsible for these pharmacological activities.

ACKNOWLEDGEMENT: We the authors express profound gratitude to Chairman, Department of Pharmacy, University of Rajshahi, Rajshahi-6205 Bangladesh for providing lab facilities and International Centre for Diarrhoeal Disease Research, Bangladesh (ICDDR, B) for supplying rats for the research work.