Cordia dichotoma known as lasura, lisora, is a commonly known herb in Indian system of medicine to treat various disorders including diabetes mellitus without any scientific evidences. Therefore this study was designed to investigate in vivo hypoglycemic and antidiabetic potential of methanol extract of fruits of Cordia dichotoma in glucose loaded animals and alloxan induced diabetic animals. In both the models Cordia dichotoma reduce the blood glucose level when compared to diabetic control group and exert a significant hypoglycemic and antidiabetic activity. However the potency of the herb was less than that of standard drug metformin. Cordia dichotoma methanol extract also reduced the rate of body weight loss in normal and alloxan induced diabetic animals. The results of this study revealed the presence of a significant antidiabetic potential of methanol extract of Cordia dichotoma in alloxan induced diabetic rats. On the basis of this further research work is needed to investigate exact mechanism of action and also to isolate the active constituent/s responsible for the activity.

INTRODUCTION: Diabetes mellitus (DM) currently is a major health problem for the people of the world and is a chronic metabolic disorder resulting from a variable interaction of hereditary and environmental factors and is characterized by abnormal insulin secretion or insulin receptor or post receptor events affecting metabolism involving carbohydrates, proteins and fats in addition to damaging liver, kidney and β cells of pancreas 1.

The number of people suffering from the disease worldwide is increasing at an alarming rate with a projected 366 million peoples likely to be diabetic by the year 2030 as against 191 million estimated in 2000 2. From literature review it has been revealed that 15 - 20% of diabetic patients are suffering from insulin-dependent diabetes mellitus (IDDM) or type-I 3. In Type-I diabetes mellitus, there is completely destruction of pancreatic β cells and patient is unable to release insulin for maintaining the blood glucose. In Type-II diabetes mellitus pancreatic β cells partially destruct and/or formation of such proteins opposing the insulin action. The IDDM is noted both in adult and child hood. It is characterized by elevation of both fasting and post-prandial blood sugar levels.

Chronic hyperglycemia during diabetes causes glycation of body proteins that in turn leads to secondary complications affecting eyes, kidneys, nerves and arteries 4. These may be delayed, lessened or prevented by maintaining blood glucose values close to normal in modern medicine; no satisfactory effective therapy is still available to cure the diabetes mellitus. Though insulin therapy is also used for the management of diabetes mellitus, but there are several drawbacks like insulin resistance 5, anorexia, nausea, brain atrophy and fatty liver after chronic treatment.

Besides the use of insulin for the treatment of insulin dependent diabetes mellitus (IDDM), other approaches for the control of hyperglycemia include the use of amylin analogues which regulate gastric emptying and inhibitors of intestinal alpha glucosidases like acarbose, miglitol and voglibiose which delay postprandial hyperglycemia. Sulphonylureas, the most widely used class of drugs act by closure of ATP dependent channel.

Metformin, a biguanide oral antidiabetic limits intestinal glucose absorption. These drugs have certain effects like causing hypoglycemia at higher doses, liver problems, lactic acidosis and diarrhea. It is apparent that due to the side effects of the currently used drugs, there is a need for a safe agent with minimal adverse effects, which can be taken for long durations. Though biguanides and sulfonylureas are valuable in treatment of diabetes mellitus, their use is restricted by their limited action, pharmacokinetic properties, secondary failure rates and accompanying side effects 6. Moreover, these therapies only partially compensate for metabolic derangements seen in diabetics and do not necessarily correct the fundamental biochemical lesion 7.

Recently, there has been increasing interest in the use of medicinal plants. The use of medicinal plants in modern medicine suffers from the fact that though hundreds of plants are used in the world to prevent or to cure diseases, scientific evidence in terms of modern medicine is lacking in most cases. However today it is necessary to provide scientific proof as whether to justify the use of plant or its active principles 8.

Cordia dichotoma L. (Boraginaceae) is tree of tropical and subtropical regions, commonly known as Lasaura/Lasura. It is a medium sized tree with short crooked trunk, leaves simple, entire and slightly dentate, elliptical-lanceolate to broad ovate with round and cordate base, flower white, fruit drupe, yellowish brown, pink or nearly black when ripe with viscid sweetish transparent pulp surrounding a central stony part 9. It grows in sub-Himalayan tract and outer ranges, ascending up to about 1500 meter elevation 10. It is used as immunomodulator, antidiabetic, antihelmintic, diuretic and hepatoprotective in folklore medicine 11.

Cordia dichotoma seeds have disclosed the presence of α-amyrins, betulin, octacosanol, lupeol-3-rhamnoside, β-sitosterol, β-sitosterol-3-glucoside, hentricontanol, hentricontane, taxifolin-3, 5-dirhmnoside and hesperitin-7-rhamnoside. The seed contain α-amyrin and toxifolin 3, 5, dirhamnoside, which shows significant anti-inflammatory activity by an oral dose of 1gm/kg in albino rats. The seeds of this plant reported to contain fatty acids and flavonoids 12.

The goal of the present study was to investigate the antidiabetic profile of methanol extract of Cordia dichotoma fruits with seeds by different models to corroborate its ethnopharmacological uses.

Plant Material: The fruits of Cordia dichotoma were collected from the local market of Varanasi and were authenticated by Division of taxonomy, National Botanical Research Institute (NBRI), Lucknow and a voucher specimen no. NBRI/CIF/108/2010 was deposited in national herbarium of NBRI, Lucknow for future reference.

Extract Preparation: The dried fruits of the plant (250 g) was comminuted to powder passing through a 60 mesh and then extracted with 95% methanol using a Soxhlet’s apparatus. The extract was filtered through cotton wool plug and dried in vacuum on a rotary evaporator (Buchi type) at 40-50oC. Complete dryness was achieved in a calcium chloride desiccator and the dry extract was used for all experimental studies.

Phytochemical Screening: The preliminary phytochemical screening of the crude methanol extract of fruit pulp of Cordia dichotoma was carried out in order to ascertain the presence of its constituents utilizing standard conventional protocols 13-15. Phytochemical screening using thin layer chromatography (TLC) was conducted for extract that showed a potential antidiabetic activity against alloxan induced rat diabetes model. Methanol extract was applied 1cm above from the base of the TLC plates (0.25 mm, Macherey-Nagel, Germany). Development was done using Toluene: methanol: diethyl amine (60:40:5) and Chloroform: methanol: Glacial Acetic Acid (9:1:1) as solvent system specific for various flavonoids and terpenoids respectively.

Development of the chromatograms were carried out using anisaldehyde sulphuric acid spraying reagent and then plates were heated at 105oC in a hot air oven till the spots were developed 16.

Animals: Healthy male albino Wistar rats each weighing 170-200 g were used for study. The rats were housed in polypropylene cages in animal house of BBDNITM, Lucknow and maintained under standard conditions (12 h light and dark cycles, 25 ±30C and 55-60% relative humidity). The animals were fed with a standard diet and water ad libitum. The study was performed as per the guidelines of IAEC (Institutional Animal Ethics Committee) and Committee for purpose of control and supervision of Experiments on Animals (CPCSEA) and was approved by approval no. - BBDNITM/IAEC/01/2010.

Acute Toxic Study: The acute toxicity for the fruits of Cordia dichotoma was determined in albino rats (170-200 g) by adopting fixed dose method of CPCSEA (OECD guidelines No. 420). Animals were administered with increasing dose of methanol extract (5, 50, 300, 2000 and 5000 mg/kg body weight) to determine changes in parameters for assessing toxicity. The animals were observed for behavior profile, neurological profile and autonomic profile till fourteen consecutive days. Correspondingly dose used for pharmacological activity was finalized for methanol extract 17.

Induction of Diabetes Mellitus: Twenty four male Albino Wistar rats weighing 170-200 grams were used for the study of the effects of Cordia dichotoma extract on the blood glucose levels of the animals. The animals were fed on commercial feeds and were given water ad libitum. The animals were fasted from feeds for 12 hours before the commencement of each experiment, but were allowed water ad libitum. The rats were injected with alloxan mono hydrate suspended in water at a dose of 120 mg/kg body weight intraperitoneally. They were kept for the next 24 hours on 5% glucose solution bottles in their cages to prevent hypoglycemia. After a period of three days the rats with a blood glucose levels greater than 150 mg/dl were considered diabetic and used for current research work 17.

Experimental Procedure for OGTT and Antidiabetic Activity: The animals for oral glucose tolerance test were randomly assigned into four groups of six rats in each group (n=6) each as follows, namely

In all the groups, blood was collected from the animal’s tail vein at 0, 30, 60, 90 minutes after glucose feeding. Simultaneously, blood glucose was measured by trinder’s glucose oxidase method.

The animals for Alloxan-induced diabetic study were randomly assigned into four groups (1-4) of six rats (n=6) each as follows, namely;

Determination of Blood Glucose Levels: Blood samples were collected by cutting the tail-tip of the rats, for blood glucose determination at intervals of 1st, 7th, 14th and 21st day. Determination of the blood glucose level was done by the glucose-oxidase principle using the ONE TOUCH Basic (Lifescan, Milpitas, CA) instrument and results were reported as mg/dl.

Statistical Analysis: Blood glucose levels were expressed in mg/dl as mean ± SEM (standard error of mean). The data were statistically analyzed using one way ANOVA by Dunnett test. The comparison was made reference group and test group versus disease control group. The values of P<0.05 and P<0.01 were considered as significant.

TABLE 3: BODY WEIGHT OF THE ANIMAL DURING THE EXPERIMENT IN ALLOXAN INDUCED DIABETIC RATS 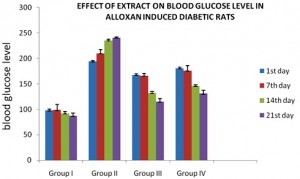 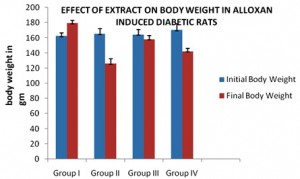 It was also observed that Cordia dichotoma fruit methanol extract when administered to alloxan induced diabetic rats, the weight loss was reversed and the animal returned to near normal when compared to disease control group. The ability of the methanol extract of fruit to protect body weight loss seems to be due to its ability to reduce hyperglycemia.

The possible mechanism by which fruits bring about a decrease in blood sugar level may be by potentiating of the insulin effect of plasma by increasing either the pancreatic secretion of insulin from β cells of the islets of Langerhans or its release from the bound form. A number of other plants have been reported to exert hypoglycemic activity through insulin release-stimulatory effect.

To our knowledge, this is the first study in which methanol extract of fruits pulp of Cordia dichotoma was proved in vivo a potent hypoglycemic/anti-hyperglycemic agent and this information can be useful for the management of Type-I as well as Type-II diabetes mellitus. On the basis of this study further research works are needed to understand the exact mechanism of action of hypoglycemia produced by drug and to isolate the moieties responsible for the activity.