INTRODUCTION: Diabetes is defined as a state in which homeostasis of carbohydrate, protein, and lipid metabolism is improperly regulated as a consequence of a relative or absolute deficiency of insulin secretion, resistance to insulin action, or both at one or more points in the complex pathways of hormone action 1. It is a hereditary or acquired incapability to transport sugar from the bloodstream into the cells. Devoid of sufficient insulin, the body cells cannot absorb adequate glucose from the blood; thus, blood glucose levels enhance, which is known as hyperglycemia. Hyperglycemia can damage some important body organs, for example, the kidneys, liver, eyes, nerves, heart, and blood vessels 2.

The basic physiological function of insulin is promoting the synthesis of carbohydrates, proteins, lipids, and nucleic acids. The effects of insulin on carbohydrate metabolism include stimulation of glucose transport across muscle and adipocyte cell membranes, regulation of hepatic glycogen synthesis, and inhibition of glycogenolysis and gluconeogenesis 3, 4. A decrease in either insulin secretion or sensitivity can cause diabetes that leads to deregulate the synthesis of carbohydrates, lipids, proteins, and nucleic acids 5. Plants have always been an exemplary source of drugs and herbal drugs, which have been investigated all over the world to treat diabetes 6, 7.

Till today more than 1 200 species of plants have been screened for activity on the basis of traditional knowledge 8. However, the ultimate objective of their use is that they should interact directly with our body chemistry without side effects 9, 10. Synthetic hypoglycemic agents that are capable of reducing blood sugar levels possessed the most worrying side effects.

Most of the related side effects of synthetic drugs are metallic taste, gastrointestinal discomfort, and nausea. Therefore, finding other anti-diabetes agents, especially those made from natural sources, is desired 11. Azima tetracantha Lam. (Family: Salvadoraceae) locally known as “Mulsangu”, is a rambling spinous shrub flowering throughout the year found in Peninsular India, West Bengal, Orissa, African Countries and extends through Arabia to tropical Asia 12. Azima tetracantha Lam. has been mentioned to be therapeutically used as antimicrobial, antifungal, anti-inflammatory, analgesic, antioxidant, antipyretic, antiulcer, anti-cancer, anti-snake venom, diuretic, and hepato-protective activities 13-17. ­The present study was undertaken to study the effect of ethanol extract of Azima tetracantha Lam. on anti-oxidant, anti-diabetic, and anti-microbial activity.

Preparation of Plant Extracts: The fresh leaves were washed with running tap water and rinsed with distilled water to remove dust. The cleaned leaves were shade dried, and the shade dried leaves were coarsely powdered in an electric grinder and stored in an airtight glass container until further use. The leaves were identified by Dr. S. John Britto, Director, Rapinat herbarium, St. Joseph College, Tiruchirapalli, Tamil Nadu. The voucher specimen number (RHT.63874). Powdered leaves (100 mg) were extracted with different solvents of varying polarity (aqueous, ethanol, and hexane) in a ratio of 1:2 (w/v) by hot continuous percolation method in a Soxhlet apparatus (Harborne, 1973). The residue was again extracted with the same solvent twice. Extracts were filtered and concen-trated using a rotary evaporator. The extracts free dried leaves samples were stored at -20 ºC.

Animal Model: Healthy adult male Wistar albino (180-200g) rats 8-10 weeks old rats were used in this study. The rats were housed in polypropylene cages and maintained under suitable nutritional and environmental conditions throughout the experiment. The Institutional animals’ ethics committee approved all the experimental protocols SAC/IAEC/BC/2016/Ph.D-006)

Induction of Diabetes: After overnight fasting, diabetes was induced by intraperitoneal injection of Streptozotocin (STZ) (Sigma, St. Louis, MO) dissolved in normal saline, at a dose of 60 mg/kg. The control rats received the vehicle (Gum Acacia) alone. After 2 weeks of time for the development of diabetes, the rats with moderate diabetes having glycosuria and hyperglycemia (blood glucose range of above 220 mg/dL) were considered as diabetic rats and used for the experiment.

Histopathological Study: For the histopathological study, the tissues were fixed in Bouin’s fluid for about 24 h and processed. Inadequately dehydrated tissues cannot be filtered with paraffin; in this condition, sectioning will be a problem. In order to avoid this, tissues were treated with ethanol. The tissues were kept in the xylol a clearing agent, till they become transparent. During impregnation, the clearing agent xylol was replaced by paraffin wax. The paraffin wax is also used for embedding with an optimum melting point of about 56 °C to 58 °C. Fixed tissues were cut at 5 µm and stained with hematoxylin and eosin. The sections were examined under Euromex microscope, and photo-micrographs were taken.

Estimation of Bio-chemical Parameters: The fasting blood glucose was measured on 4,15,30,45 and 60 days, and the effect of ethanolic leaves extract of Azima tetracantha Lam. was recorded for the following biochemical parameters.

Statistical Analysis: Values are expressed as Mean ± SD for six rats. Mean values within a graph followed by different letters are signiﬁcantly different from each other at P <0.05 level comparison by Duncan’s multiple range test (DMRT).

It has been reported that an increase of glucose uptake may be due to the extrapancreatic effect resemble insulin 19. In the present study of the estimation of glycogen, there is a significant decrease in the glycogen levels of diabetic treated animals. Hence, it may be because of feedback regulation of the glycogen synthetase system to impair the normal capacity of the liver to synthesis glycogen 20. The glycogen level significantly decreased in diabetic rats when compared to the treated with Azima tetracantha Lam.  It resulted in a significant enhancement in the glycogen content. A similar result was observed in other studies 21, 22.

Values are expressed as Mean ± SD for six rats. Mean values within a graph followed by different letters are signiﬁcantly different from each other at P <0.05 level comparison by Duncan’s multiple range test (DMRT).

The present study could have been due possibly to stimulation of insulin release from beta cells. The glycogen content is increased in the liver muscle of diabetic rats 23. It may be due to the activation of the glycogen synthase system by Azima tetracantha Lam.

Values are expressed as Mean ± SD for six rats. Mean values within a graph followed by different letters are signiﬁcantly different from each other at P <0.05 level comparison by Duncan’s multiple range test (DMRT). 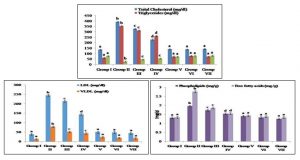 Histology of Liver and Pancreas: Photomicro-graphs of the normal liver showed well-visualized architecture with the predominant nucleus. Liver sections of streptozotocin-induced diabetic rats showed marked structural alterations in the liver. The major alteration was periportal fatty infiltration, necrosis of hepatocytes. This damage was reversed, and regeneration of parenchyma cells by the ethanolic leaf extract of Azima tetracantha Lam. (300 mg/ bw) and Glibenclamide treatments Fig. 4. 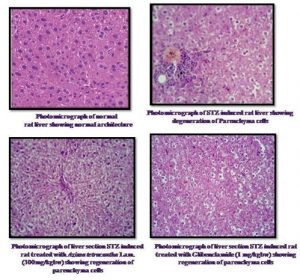 Photomicrographs of the pancreas showed normal acini and normal cellular population in the islets of Langerhans in the pancreas of control rats. Pancreas sections of Streptozotocin-induced diabetic rats showed extensive damage to the islets of Langerhans and reduced dimensions of islets. Photomicrograph of Pancreatic Islets of Streptozotocin-induced rat treated with Azima tetracantha Lam. (300 mg/kg) and Glibenclamide (1 mg/kg bw) showing regeneration of Islets of Langerhans, blood vessels and acinus Fig. 5. The present study revealed that the immediate action of Streptozotocin induced diabetes by destroying ß-cells. The ultra-structure of streptozotocin-diabetic pancreas showed considerable reduction in the islet langerhans and depleted islets 28. The diabetic rats showed pancreatic islet regeneration. The regene-rative effect of the pancreatic cells by Azima tetracantha Lam. ethanolic extract via exocrine cells of the pancreas may enlighten the positive effect of these agents on the production of insulin. The present finding is in agreement with Monday and Uzoma et al. study 29. The role of Azima tetracantha Lam. ethanolic extracts in reversing the diabetic state at the cellular level besides the metabolic normalization further proves its potential as an antidiabetic assert 30-32. So, the Azima tetracantha Lam. ethanolic extract was found to be effectively improving the liver and pancreas function and reduced the lesions associated with the diabetic state in Streptozotocin-induced diabetic rats 33-35. 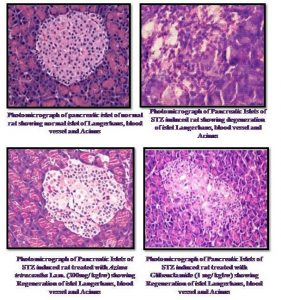 Author Contribution: All authors contributed equally to this manuscript.

CONFLICTS OF INTEREST: The authors declare that they have no conflicts of interest. It has not been published elsewhere. That it has not been simultaneously submitted for publication elsewhere, all authors agree to the submission to the Journal.