INTRODUCTION: Diabetes mellitus (DM) is characterized by hyperglycemia resulting from defects in insulin secretion, insulin action, or both. Hyperglycemia is associated with long term damage, dysfunction and failure of various organs are a major factor in the development of many complications in patients with diabetes. 1 DM is not a single disease,but a group of several metabolic disorders that have in common hyperglycemia and dyslipidemia, and lead to serious complications causing damage to many organs, especially the eyes, kidneys, nerves, heart. 2 The disease has taken an ever increasing share of national and international health care budgets.

It is projected to become of the world’s main disablers and killers within the next 25 years. 3  Streptozotocin (STZ) 2-deoxy - 2 - (3-methyl - 3 - nitrosourea) - 1 - d - glucopyranose is a naturally occurring compound, produced by the soil bacterium Streptomyces achromogenes. STZ is a cytotoxic glucose analogue. After its discovery, it was being used as a chemotherapeutic alkylating agent in the treatment of metastasizing pancreatic islet cell tumors and other malignancies. 4 STZ functions as a DNA synthesis inhibitor in both bacterial and mammalian cells. 5 It prevents DNA synthesis in mammalian and bacterial cells.

It prevents cellular reproduction with a much smaller dose than the dose needed for inhibiting the substrate connection to the DNA or inhibiting many of the enzymes involved in DNA synthesis. 6 A large number of medicinal plants are claimed to be useful in Diabetes in all traditional systems of medicine and folklore. Plumeria rubra trees are found throughout in India and in tropical areas.

The ethanolic extract of the flowers of Plumeria rubra possessed significant anticancer activity against liver cancer HePG2 cell line by MTT assay.7 Though the plant and its extracts have been extensively used in the folklore medicines, information from an organized search of published literature does not provide the evidence for its antidiabetic activities. In the present study, we have investigated the antidiabetic activity of aqueous extract of the flowers of Plumeria rubra in laboratory animals. The decoction of the flowers has been traditionally used by the Mexican people for treating Diabetes Mellitus. 8, 9 Phytochemical investigation of Plumeria rubra reveals the presence of flavonoids, tannins. 10 These principles are known to be bioactive in the management of diabetes. 11, 12 Flavonoids exhibit hypoglycemic activity and are also known for their ability of beta cell regeneration of pancreas.13, 14, 15

2.1 Collection and Authentication of Plant Material: Plumeria rubra flowers were collected fresh from the garden of Pune University in the month of October. Authentification of plant material was done in the Botanical Survey of India, Pune. The voucher specimen No. given was AMRPLR1.

2.2 Extraction and Preliminary Phytochemical Evaluation: The flowers were separated, dried and powdered in grinder. The 60g powder was extracted with 1000ml of boiling water for 30min. The resulting extract was dried under room temperature. The percentage yield obtained was 16.6%. Resulted extract was collected and stored at room temperature. The extract was screened for the presence or absence of secondary metabolites such as alkaloids, flavonoids, tannins, glycosides using standard procedures.16

2.3 Animals: Albino mice of either sex weighing 18-22gm were used for the study. The animals were procured from the animal house of Seth Govind Raghunath Sable College of Pharmacy, Saswad. Protocol of the experiments and animal usage were discussed in the Institutional Ethical Committee meeting and permission was obtained to carry out the parameters selected for the study. Animals were housed individually in polypropylene cages, maintained under standard conditions (12-h light and 12-h dark cycle; 25 ± 5 °C; 35 60% humidity), the animals were fed with standard pellet diet and provided water ad libitum.

2.4 Acute Toxicity Study: Acute Oral Toxicity was carried out according to OECD guidelines 425. Albino mice (female) weighing between 25 to 40 g were used. Above the study was done at dose 2000 mg/kg and 5000 mg/kg body weight.17

2.5 Assessment of Plumeria rubra extract in STZ induced diabetic mice: Wistar rats weighing (200-250g) of either sex was used for study. The rats were fasted for 18 h and water was given ad libitum. After 18 h fasting, the initial fasting Blood Glucose (BG) was estimated by One Touch Horizon Glucometer strips. The animal showing very high > 150 mg/dl or low < 75 mg/dl was discarded and the animal showing optimum BG 80 - 120 mg/dl was selected for the study. The non diabetic animals were then injected with STZ (55 mg / kg) i.p.18, 19, 20 After 72h of injection, blood was withdrawn by tail vein puncture method and BG was estimated by One Touch Horizon Glucometer strips. The diabetic animals which showed BG >250 mg/dl were selected for study and they were grouped as follows;

Blood samples were withdrawn from all animals on 0, 3rd, 7th, 14th, 21st, 28th day in animals by tail vein puncture method and BG was estimated by One Touch Horizon Glucometer strips. Change in Blood Glucose, mean and SEM were calculated and tabulated.

2.6 Histopathological Study: Pancreas, kidney were removed stored in 10% formalin and then processed with varying grades of alcohol followed by xylene and paraffin. Tissues were embedded in paraffin and cut at 5 microns using microtome and stained after deparrination using hematoxylin and eosin stains to verify morphological assessment. Microscopic analysis was done.

2.7 Statistical Analysis: The results were expressed as mean ± SEM. Comparison between the groups was made by one-way analysis of variance (ANOVA) followed by "Dunnett's Test". P<0.05 was considered to be significant.

In the present study, we have investigated the antidiabetic activity of Plumeria rubra in laboratory animals. The decoction of the flowers has been traditionally used by the Mexican people for treating Diabetes Mellitus. 21, 22 Phytochemical investigation of Plumeria rubra reveals the presence of flavonoids, tannins. 10 These principles are known to be bioactive for the management of diabetes. 23, 24  It is well known that certain flavonoids exhibit hypoglycemic activity and are also known for their ability of beta cell regeneration of pancreas.25, 26, 27

Streptozotocin is used in medicine for treating certain cancers of the islets of langerhans and used in medical research to produce an animal model for diabetes. It is a glucosamine-nitrosourea compound. As with other alkylating agents in the nitrosourea class, it is toxic to cells by causing damage to the DNA. Streptozotocin is similar enough to glucose to be transported into the cell by the glucose transport protein GLUT2, but is not recognized by the other glucose transporters. This explains its relative toxicity to beta cells, since these cells have relatively high levels of GLUT2. 29, 30

The levels of serum lipids are usually elevated in diabetes mellitus. This abnormal high level of serum lipids is mainly due to the uninhibited actions of lipolytic hormones on the fat depots. It is reported that hypercholesterolemia and hypertriglyceridemia occurs in STZ-induced diabetic rats.31, 32, 33 The GB (10mg/kg) treated group showed a significant reduction (P < 0.001) in lipid levels.

Similarly, Plumeria rubra (100, 200, 400 mg/kg) showed a significant reduction (P<0.001) in lipid levels. It not only lowered TC, TG and LDL but also enhanced the cardioprotective lipid HDL. The protective effect of Plumeria rubra is also evident from the histopathological examination on pancreas and kidney. It evidently reduced the injuries of pancreas, kidney induced by STZ.

Thus, the significant antidiabetic effect of aqueous extract of Plumeria rubra may be due to the presence of more than one antihyperglycemic principle and their synergistic properties. From this study, we can conclusively state that Plumeria rubra aqueous extract has shown remarkable effects on blood glucose level and a marked improvement on hyperlipidemia due to diabetes. Its specific effect on HDL has an additional advantage in checking coronary risks. The extract seems to have no toxicity, as no death is reported up to 10 times of effective the dose.

3.2.1. Effect of Plumeria rubra on histopathology of pancreas in STZ induced diabetic rats: 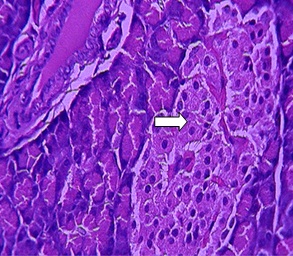 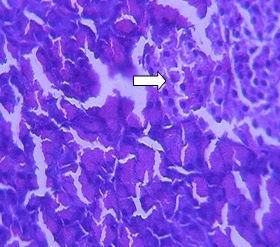 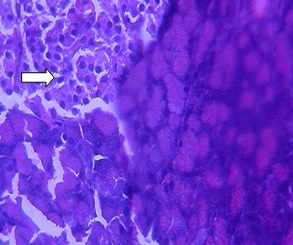 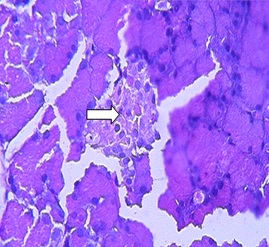 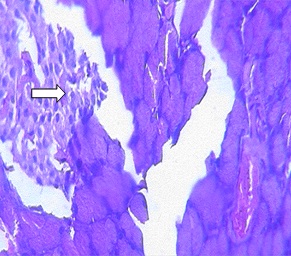 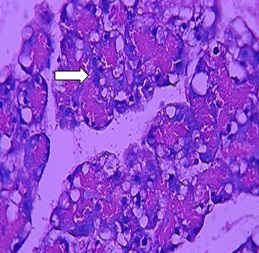 3.2.2. Effect of Plumeria rubra on histopathology of kidney in STZ induced diabetic rats: 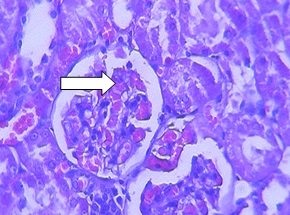 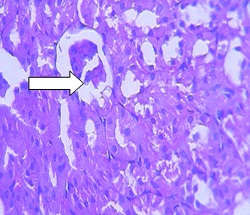 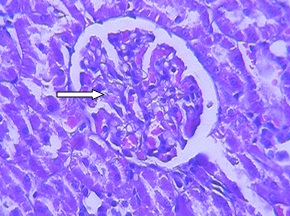 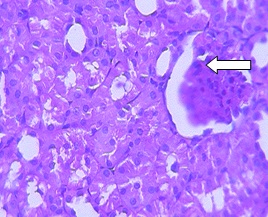 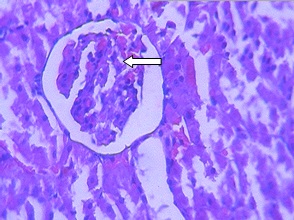 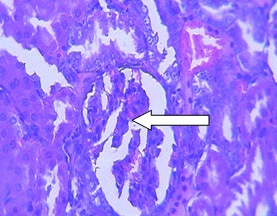 CONCLUSION: Thus antidiabetic effect of PR suggests that its main mechanism may be mediated through the interaction between insulin and gluconeogenesis, which further affects glucose metabolism in the liver and other tissues in the body. Further pharmacological and biochemical investigations are underway to elucidate the detailed mechanism of the antidiabetic effect of PR.

ACKNOWLEDGEMENTS: We are thankful to Botanical Survey of India, Pune and our college for providing materials, facilities and the technical support required to carry out this research.