ABSTRACT: The concerned study reveals the first time experimental investigation of Hypoglycemic and antihyperglycemic effect of seed extract of Acacia tortilis plant was in normoglycaemic and Alloxan-induced (135 mg/Kg body weight intraperitoneally) diabetic rats. The seed extract at the dose of 100 and 200 mg/kg body weight was administered orally once a day for 13 days and at the end of the experimentation Oral Glucose Tolerance Test (OGTT) and blood glucose estimation was done in all groups. The extract significantly lowered the blood glucose levels to an extent comparable to that produced by standard Oral hypoglycemic drug (Gliclazide 22 mg/Kg body weight) in both normal and diabetic rats. The results suggest that seed extract of Acacia tortilis possess significant antidiabetic activity. The extract seems promising for the development of a phytomedicine for diabetes mellitus in future prospectus.

INTRODUCTION:Diabetes is a major threat to global public health that is rapidly getting worse and highest impact in on adult of working age in developing countries 1. There are an estimated 246 million people with diabetes in the world, of whom about 80% live in developing countries 2. Although diabetes is often not recorded as the cause of death, globally, it is believed to be the fifth leading cause of mortality in 2000 after communicable diseases, cardiovascular disease, cancer and injuries 3.

The number of cases of non -insulin dependent diabetes mellitus (Type-2) has increased dramatically due to the changes in lifestyle, increasing prevalence of obesity, and ageing of populations. The most disturbing trend is a shift in age of onset of diabetes to a younger age in recent years. This presents a serious problem to the healthcare system because, at the peak of their working career, people with diabetes have an excess risk of mortality and morbidity compared with those without diabetes 4-6.

Indeed, over two-thirds of deaths attributable to diabetes occur in developing countries 7. According to the World Health Organization, more than 70% of the world’s population must use traditional medicine to satisfy their principal health needs. A great number of medicinal plants used in the control of the diabetes mellitus have been reported 8. Now in recent years there has been a growing trend to evaluate the plant constituents on pharmacological basis and screening of more effective and safe hypoglycemic and antihyperglycemic agents.  Therefore the present work have been planned to study indigenous plants (Acacia tortilis) using new and sensitive technologies and statistical analysis. Acacia is a genus of shrubs and trees belonging to the subfamily Mimosoideae of the family Fabaceae, first described from Africa by Linnaeus in 1773.

Acacia is one of the plants that have been frequently used as medicine like Acacia Bark has been used in treatment of haemoptysis, gonorrhea8, leprosy and headaches 9. Acacia catechu has been used for treating fever, diarrhoea, leucorrhoea, piles, erysipelas 10 and throat infection 11. It is reported that Acacia catechu has hypoglycemic activity 12 hepatoprotective, antipyretic and digestive properties 13, 14. Considering the above facts, the present study was undertaken to evaluate the hypoglycemic and antihyperglycemic activities of Acacia tortillis in experimental animal models.

Animals: The study was conducted on healthy albino wistar rats of either sex weighing 150-250 gm. The animals were made available in the Central animal house, GSVM Medical College, Kanpur. The rats were housed in polypropylene cages and maintained under standard conditions (12 h light /dark cycle, at room temperature 25± 3ºC and 35-60% humidity), fed in standard pellet diet and water ad libitum. The study was approved by the Institutional Animal Ethics Committee, Kanpur. The animal care and handling was done as per the guidelines set by CPCSEA and the Indian National Science Academy, New Delhi, India.

Induction of Experimental Diabetes: Diabetes was induced in albino rats of either sex by a single intraperitoneal injection of aqueous Alloxan monohydrate (135 mg/kg body weight) (Sigma Chemical Co. USA) 15. Blood samples were collected before and after the administration of Alloxan to know the status of diabetes. After two days, diabetes was confirmed by testing blood glucose level using glucometer and they were further maintained for four days for well establishment of diabetes. The animals with blood glucose level more than 200 mg/dl (moderate diabetes) were selected for the experiment.

Preparation of Plant Extract: Seeds of Acacia tortilis were taken for the study. Dried seeds of the plant were properly grinded and sieved with mesh size 40-60. Extraction of powdered seed was done with distilled water to separate to volatile and non-volatile fraction with the help of klevenger apparatus and heating mental at 100° C. Non-volatile fraction was cooled and further precipitated with the help of ethyl alcohol for isolation of gum and other solutes. Isolated gum was purified with the help of filtration technique followed by ion exchange and freeze-drying process. Finally, the Acacia tortilis seed extract (ATE) was stored in refrigerator until use.

Acute Oral Toxicity Test in Rats: After an overnight fast of 18 h, ATE was administered orally in doses of 50,100,200,500 and maximum dose of 1000 mg/Kg body weight to groups of rats (n = 6) and closely observed for the first 2-3 hr for signs of toxicity. The behavioral changes and percentage mortality were noted beginning with 24 h up to a period of 14 days 16.

Statistical analysis: Data were expressed as mean ± standard error of mean (SEM). Statistical comparisons were performed by one-way analysis of variance (ANOVA), followed by Scheffe’s post-hoc test or students unpaired t-test where appropriate. Results were considered to be significant when p values were less than 0.05 (p<0.05).

Acute Toxicity Study: There were no signs of toxicity, behavioral changes and mortality recorded up to a dose of 1000 mg/kg body weight of the extract.

Effect on Normal Rats: Effect of Acacia tortilis extract on blood glucose levels in normal rats outlined in table 01 which is also showing percentage reduction in serum glucose levels and significance is expressed with respect to control group. It is observed that the treatment of ATE at both the doses of 100 mg/kg and 200 mg/ kg reduced blood sugar signiﬁcantly at all-time points when compared to normal control rats. Acacia seed extract at a dose of 200 mg/kg dose produced highly significant effect at 0 hr& 120 hrs (p<0.001).The maximum reduction of blood glucose observed at 120 hr (22.23%) by 200 mg/kg dose of ATE but at 0 hr (14.91%) by 100 mg/kg dose. The Gliclazide treated rats showed highly signiﬁcant (p<0.001) blood glucose lowering eﬃcacy at all the time intervals.

Effect on Alloxan Induced Diabetic Rats: The effect of 13-day administration of ATE on blood glucose levels of Alloxan induced diabetic rats is shown in Table 2. The results indicate that both the dose 100& 200 mg/kg of ATE significantly (p<0.05) reduced the hyperglycemia induced by Alloxan.

The percent of reduction in blood glucose levels was maximum at 120 min for both groups as 30.21% and 34.48% respectively. Though the antihyperglycemic activity of the ATE treated rats were signiﬁcant when compared to control but it was not as eﬀective as gliclazide.

Metabolic Changes in Diabetic Rats: The eﬀect of extract on the body weight changes for two weeks of diabetic rats are shown in Graph 1. It was observed that in diabetic rats, there were weight losses, relative to day 0, i.e. before the start of the treatment.

The diabetic control group rats lost 18.16% of their body weight. The loss was 10.63% (P <0.05) for ATE, signiﬁcantly lower as compared to control. The diabetic rats treated with Gliclazide also showed a bodyweight reduction of 6.52%, which is signiﬁcantly much lesser than control diabetic rats.

The diabetic control group rats had moderate polyphagia and polydipsia by the end of week 2 of experiment with respective increase in food and ﬂuid intakes of 59.09 and 22.16%. 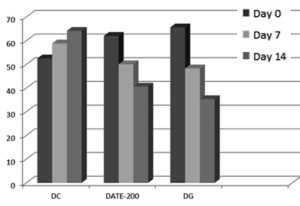 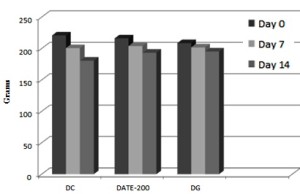 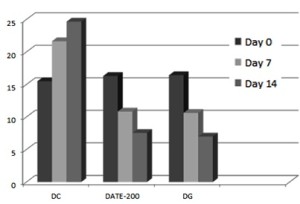 The action of reactive oxygen species with a simultaneous massive increase in cytosolic calcium concentration causes rapid destruction of βcells 21. The Alloxan administration in experimental animals has been reported to produce pancreatic lesion which is proportional to the dose of the drug administered. And the size of the lesion also correlates with the pancreatic insulin content 22. The Moderate diabetic animals are recommended for use in testing drugs for use in Non-insulin dependent diabetes mellitus 23.

Hence in this research, moderate diabetes was produced by Alloxan monohydrate in a dose of 135 mg/kg body weight.

In light of results, the study indicates that extract of acacia at both dose 100 & 200 mg/kg exhibited significant and consistent reduction in blood glucose levels in normoglycemic and diabetic rats. The anti-hyperglycemic effect of aqueous extract might be due to stimulatory effect on the remnant β-cells to secrete more insulin or from regenerated β-cells or increase the glucose uptake. This effect is comparable to that produced by standard drug, Gliclazide (22 mg/kg).

However, it was less efficacious than gliclazide. It is well established that sulfonylureas cause hypoglycemia by stimulating insulin release from pancreatic β cells24. The comparable effect of the extract with gliclazide suggests the possibility of a similar mode of action.

Moreover, the extract at a dose of 200 mg produced highly significant results at all-time points in normal rats but not in diabetic rats. This effect strengthens the possibility of above mechanism as there were 100% intact β-cells in normal rats.

Another observation arising from this study is the effect of the ATE on the body weight in the treated rats. Insulin deficiency causes drastic elevation in levels of blood glucose as a result of excessive production of endogenous glucose and also causes a drastic change (reduction) in body weight 25, which may be due to excessive breakdown of tissue proteins and lipids caused by insulin insufficiency. The improvement in body weight in diabetic rats treated may be due to improvement in metabolic activity of the system to maintain glucose homeostasis.

The other probable mechanism of this beneﬁt might be due to it’s eﬀect in controlling muscle wasting by controlling the disintegration process. These results suggested that ATE might contains some biological principle(s) that possess insulin protective or insulin-like activity but this hypothesis would require experimental validation and further experiments are required to elucidate the exact mechanism of action as well as on the isolation of bioactive principles.

The metabolic disturbances were corrected after the plant extract was administered for two weeks as shown by a reduction in polyphagia and polydipsia in diabetic rats treated with plant extract.

Although the present findings confirm the hypoglycemic and antihyperglycemic potential in the seeds of Acacia tortilis, the precise mechanism of its action requires further studies for appropriate elucidation.

CONCLUSION: The ATE has antidiabetic activity as it lowers serum glucose levels in normal and diabetic rats and significantly increases glucose tolerance. It also increases body weight of diabetic rats. Further studies are necessary to substantiate the above observation and to work out the exact mechanism of action involved in the antidiabetic activity of this plant.

ACKNOWLEDGMENT: The authors wish to thank the Dean, GSVM Medical College, Kanpur, Uttarpradesh, India for the support to carry out this study.