INTRODUCTION: Diarrhoea is recognized as being a problem of public health in process countries. By this fact, diarrhoea diseases worry by their endemoepidemic character. They arrive in third position among the infectious diseases most fatal in the World with 2.5 million deaths in 2004, all confused ages 1. According to the World health organization (WHO), the probability of presenting diarrhoea is 39.1% for African in South of Sahara, against 7.2 % in the developed countries 2. Modern treatment suggested, share of oral rehydration to the antibiotics administration of which the microorganisms develop more and more resistances. To find new drugs appeared in our opinion a considerable alternative in the assumption of responsibility of the diarrheal diseases in the process countries.

This is why, WHO encourages them to begin research on the medicinal plants and to promote their use in the systems of care health 3. Indeed, C. pentandra Gaertn. (Bombacaceae) is a Congolese medicinal plant used in the treatment of the diarrhoea, belly ache and gastric pain 4. In order to develop and promote the Congolese medicinal plants, to facilitate the access of the populations to the improved traditional drugs at reduced cost, and in the need for affirming or for cancelling the traditional uses of C. pentandra, we aimed investigated antidiarrheal effect of stem bark of Ceiba pentandra Gaertn. (Bombacaceae) in rats.

Vegetable Material: The pulverized dry of stem barks of C. pentandra were used. Botanical identification of the plant material was done by Mousamboté, botanist systematist of higher normal school of agronomy and forestry (HNSAF) and confirmed at the botanical laboratory of research institute in exact and natural sciences (RIENS) of Brazzaville where the samples of C. pentandra was compared with the reference samples of the herbarium to the number 2529, 20/06/1968. Plant material was dried and pulverized with a mortar. The aqueous extract of stem barks of C. pentandra was prepared by decoction. 100 g of powder   are mixed with 1000 mL of distilled water. The mixture was boiled for 15 min. After cooling and filtration, the filtrate obtained was concentrated on a double boiler (60 °C). The concentrate obtained was preserved to evaluate the antidiarrheal effect in rat.

Animal Material: Male and female albino rats weighting between 200 - 250 g obtained from the Faculty of Science and Technical of Marien NGOUABI-University were used. All animals were acclimated during one week before the experiments. They were fed and maintained under standard lighting conditions (12 h light and 12 h dark) at a temperature of 27 ± 1 °C. They were fasted for 24 h before experiments, water was given ad libitum. The rules of ethics published by the International Association for the Study of Pain have been considered 5.

Castor Oil Induced Diarrhoea in Rat: Diarrhoea was induced by intragastric administration of the castor oil in rats 6, 7. The animals were divided into groups of 5 rats each. Different doses of aqueous extract of C. pentandra (400 and 800 mg/kg), loperamide (standard drug, 10 mg/kg), distilled water (control group, 0.5 mL/100 g) were administered orally to groups, one hour prior castor oil administration (0.6 mL/100g). After castor oil administration, the animals were placed in metabolism cage. Symptoms of the diarrhoea (1= presence of symptom; 0 = absence of symptoms), onset of appearance of these symptoms were noted. Faeces are collected using a dry paper of the same weight and weightings at 2, 4 and 6 h. The animals were observed during 6 h after administration of castor oil 8. Antidiarrheal effect was determined by the percentage of inhibition of the symptoms of diarrhoea, the onset of appearance of these symptoms and the percentage of inhibition of the faeces.

Intestinal Transit: The intestinal transit was evaluated according to the method of charcoal 6, 7. The animals were divided into groups of 5 rats each. Different doses of aqueous extract of C. pentandra (400 and 800 mg/kg), loperamide (standard drug, 10 mg/kg) and distilled water (control group, 0.5 mL/100 g), C. pentandra (800 mg/kg + atropine 0.25 mg/kg) and C. pentandra (800 mg/kg + yohimbine 1 mg/kg) were administered orally to groups, one hour prior charcoal 10 % (Norit *, 10 ml/kg). Yohimbine and atropine were administered subcutaneously 10 min before the aqueous extract of C. pentandra 7. 30 min after charcoal administration, the animals were sacrificed by cervical dislocation, abdomen opened, the small intestine taken and posed on blotting paper. The distance covered by charcoal is measured by using a scale and expressed as a percentage of intestinal transit 9: 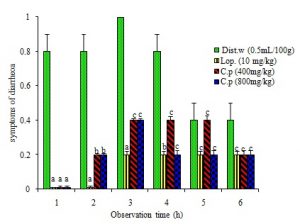 The aqueous extract (400 and 800 mg/kg) delays significantly the onset of diarrhoea symptoms appearance after castor oil administration compared to the control group Fig. 3. The maximum inhibition of fecal excretion with the loperamide is 100% and 90% for ¶the aqueous extract (400 and 800 mg/kg) at 2 h after castor oil administration Fig. 4.

DISCUSSION: ¶The diarrhoea was induced by intragastric administration of the castor oil. ¶ Diarrhoea can be explained by an osmotic increase in load in the intestine 10, the increase of motility and the intestinal disturbances of secretion remain usually a common denominator in the majority of the cases of diarrhoea 11. ¶Castor oil is composed of the triacylglycerol implying an acid fatty (C18) known under the name of ricinoleic acid 12. ¶The released ricinoleic acid produces changes in the transport of water and the electrolytes having for result a hypersecretion and increases the intestinal transit 13. ¶Castor oil increases the induction of prostaglandins 14 causes changes of the intestinal permeability and mucosa damage 15. ¶The fact that the aqueous extract of C. pentandra (400 and 800 mg/kg) prevents the diarrhoea induced by the castor oil suggests that it has substances having antisecretory properties.¶ ¶Separately the abnormal exchanges of the gastric electrolytes which explain an excessive water excretion, the diarrhoea can be also caused by an intestinal peristalsis increase. ¶The evaluation of the effect of the aqueous extract on the intestinal transit is necessary.  The gastrointestinal tract is ordered by the parasympathetic system whose neurotransmitter is acetylcholine, ¶and the sympathetic system whose neurotransmitter is noradrenalin. ¶Their stimulation produces opposed effects.

¶In addition gastrointestinal apparatus is also influenced by serotonin, histamine, prostaglandins of the series E and F, the gastro-intestinal hormones 16, ¶and the morphinic substances whose fixing on its receptors decrease the intestinal peristalsis. ¶The example is given by loperamide used as standard drug. ¶Present study showed that the intestinal transit is decreased in the presence of the aqueous extract of C. pentandra (400 and 800 mg/kg) compared to the control group. ¶This lets think that the aqueous extract, at doses used would act like antagonist of acetylcholine or agonist of α-adrenergic or morphinic receptors ¶ what could explain the delay in the appearance of the diarrhoea symptoms ¶ compared to the control group. ¶Indeed, the fact that yohimbine administrated 10 min before the extract partially raises the antidiarrheic effect and atropine potentiates them lets suggest that the aqueous extract would act like the yohimbine.¶ This mechanism of action remains to be clarified.¶  ¶

CONCLUSION: This study show that aqueous extract of C. pentandra reduced the appearance of the symptoms of diarrhoea increases the onset of appearance of these symptoms and inhibits the fecal excretion. This antidiarrheal effect could explain by the antagonist of acetylcholine or agonist of α-adrenergic or morphinic receptors.¶