INTRODUCTION: Caesalpinia pulcherrima (Family-Caesalpiniaceae) is a medicinal plant which possesses important active principals that have special medicinal value and various parts of plants are traditionally use against a variety of diseases by the rural people.Common Names are Krishnachura, Radhachura, Peacock flower, Poinciana. It is usually a small to moderate sized tree or shrub growing to 3 to 5 m tall 1.

Caesalpinia pulcherrimais native and common throughout much of India, Burma, Madagascar and dry areas of Ceylon and is often grown in Bangladesh. The plant is traditionally used for treatment of indiarrhoea, dysentery and certain skin diseases.

Upon significant literature survey it has found that very few information was found on the species and there are no significant research work has been performed on the species to judge its use in pharmaceutical industry. From the existing information, it is evident that the plant may possess some important biological activities. The main objective of this study was to evaluate the anti-diarrhoeal and analgesic activities of the ethanolic extract of dried barks of Caesalpinia pulcherrima.

Plant Material: Barks of Caesalpinia pulcherrima were collected from Khulna University campus, Bangladesh in September, 2006. The plant was identified by the experts of Bangladesh National Herbarium, Mirpur, Dhaka. (Accession number - 31390). After collection, barks were sun dried for several days to remove moisture. After drying, the dried barks were ground into course powder by ‘Hammer’ mill. About 250 gm of powdered barks was taken in a clean, flat-bottomed glass container and soaked in 700 ml of 80% ethanol.

The container with its contents was sealed and kept for a period of 7 days accompanying occasional shaking and stirring. The whole mixture was then underwent a coarse filtration by a piece of cotton followed by a filtration through filter paper and the filtrate thus obtained was concentrated using a rotary evaporator to get the crude extract.

Animals: Young Swiss-albino mice of either sex, average weight 20-30 gm were purchased from the Animal Research Branch of the International Centre for Diarrhoeal Diseases and Research, Bangladesh (ICDDR, B). The mice were kept separately in plastic cages having dimension of (28 x 22 x 13) cm. Soft wood shavings were placed in the cages for housing of the mice. The room where the mice were housed was well ventilated for air and light. Husk and excreta were removed from the cages on every day. Fresh water and pellets of mice foods, prepared by ICDDR, B were given to the mice regularly. The experimental met the national guidelines on the proper care and use of animals. The Institutional Animal Ethics Committee (IAEC) approved the experimental protocol.

Antidiarrhoeal activity: The anti-diarrhoeal activity of the ethanolic extract of bark of Caesalpinia pulcherrima was tested using the model of castor oil-induced diarrhoea in mice2. The animals were all screened initially by giving 0.3 ml of castor oil and only those showing diarrhoea were selected for the final experiment. The animals were divided into control, positive control and test groups containing five mice in each group. Control group received vehicle (1% Tween 80 in water) at a dose of 10ml/kg body weight orally.

The positive control group received Loperamide at the dose of 50 mg/kg body weight orally and test groups received the ethanolic extract of barks of Caesalpinia pulcherrima was at the doses of 500 mg/kg body weight orally. Individual animals of each group were placed in separate cages having adsorbent paper beneath and examined for the presence of diarrhoea every hour in five hoursstudy after the castor oil administration. Number of stools or any fluid material that stained the adsorbent paper was counted at each successive hour during the experiment. The latent period of each mouse was also counted. At the beginning of each hour old papers were replaced by the new ones.

Analgesic activity: The analgesic activity of the crude extract was tested using the model of acetic acid induced writhing in mice 3-4. Experimental animals were randomly selected and divided into three groups denoted as group-I, group-II and group-III consisting of 5 mice in each group. Each group received a particular treatment i.e. control, positive control and one dose of the extract. Group-I was served as the control and received only distilled water and tween-80.

Group-II was received diclofenac sodium (25 mg/kg of body weight, IP), the standard drug for comparison of potencies. The last group i.e. group-III was administered orally with the crude extract suspensions. Thirty minutes interval was given to ensure proper absorption of the administered substances. Then the writhing inducing chemical, acetic acid solution (0.7%, 10 ml/kg) was administered intraperitoneally to each of the animals of a group 5. After an interval of five minutes, which was given for absorption of acetic acid, number of squirms (writhing) was counted for 15minutes.

Antidiarrhoeal activity: Table 1 showed the effect of Caesalpinia pulcherrima on castor oil induced diarrhoea in mice. Diarrhoeal initiation time and the number of stools excreted by the animals in 4 hours were collected.Highest number of stools were found in the control (24.6±0.81) and lowest was observed in the Loperamide (Figure 1). The selected concentration of the extract also showed a good diarrheal inhibition with 56.12% and Loperamide, standard anti-diarrhoeal agent showed an inhibition of 71.4%.

Analgesic activity: Table 2 showed the effect of the ethanolic extract of Caesalpinia pulcherrima on acetic acid-induced writhing in mice. At dose of 500 mg/kg of body weight, the ethanolic extract of Caesalpinia pulcherrima produced about 47.11% writhing inhibition in test animals (Figure 2). The results were statistically significant (P < 0.001) and were comparable to the standard drug diclofenac sodium, which showed about 85.95% writhing inhibition at the dose of 25 mg/kg (P < 0.001). 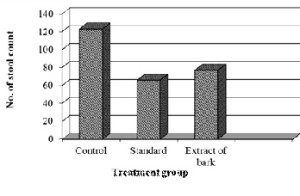 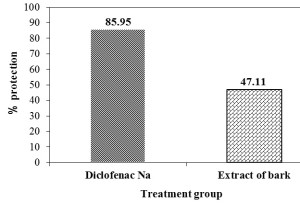 DISCUSSION: Plants are employed as important source of medication in many traditional medications 6-8. Since Caesalpinia pulcherrima is a striking ornamental plant, widely grown in domestic and public gardens and has a beautiful inflorescence in yellow, red and orange, part of the plant constituents may be polar in nature. Ethanol was used which has a wide range of solubility in both polar and nonpolar region. To avoid any solvent effect on the experimental animals, the solvent was evaporated completely to dryness 9.

The aim of the present study was to assess the anti-diarrhoeal effect of ethanolic bark extract of Caesalpinia pulcherrima in mice. The bark extract showed a significant (p<0.001) activity against castor oil-induced diarrhea. The result is almost comparable to the effect of widely used anti-diarrhoeal drug loperamide when tested at 50mg/kg of body weight. Castor oil is made up of 90% ricinoleate which is metabolized to ricinoleic acid 10.

Ricinoleic acid causes the irritation and inflammation in the intestinal mucosa, leading to release of prostaglandins, which stimulate the net secretion of water and electrolytes into the small intestine 11-12. We speculate that that the antidiarrhoeal effects of ethanolic bark extracts may be due to the inhibition of prostaglandin biosynthesis. Caesalpinia pulcherrima bark extract also significantly (p<0.001) decreased the distance of gastrointestinal motility of mice. The result of this study reveals that the bark extract of Caesalpinia pulcherrima contains pharmacologically active substances with anti-diarrhoeal properties.

Pain has been officially defined as an unpleasant sensory and emotional experience associated with actual or potential tissue damage. Pain acts as a warning signal against disturbances of the body and has a proactive function 13. Analgesic activity of the ethanolic bark extract of Caesalpinia pulcherrima was tested by acetic acid induced writhing model in mice. Acetic acid-induced writhing model represents pain sensation by triggering localized inflammatory response. Acetic acid, which is used to induce writhing, causes algesia by liberation of endogenous substances, which in turn excite the painnerve endings 14.

Increased levels of PGE2 and PGF2α in the peritoneal fluid have beenreported to be responsible for pain sensation caused by intraperitoneal administration ofacetic acid 15. The extract produced significant writhing inhibition comparable to the standard drug diclofenac sodium (Table 2). The polar compounds present in the plant extract may beresponsible for the obtained analgesic activity. Based on this result, it can be concluded that the ethanolic bark extract of Caesalpinia pulcherrima might possess analgesic activity.

CONCLUSION: Finally, it could be suggested that the ethanolic bark extract of Caesalpinia pulcherrima possesses anti-diarrhoeal and analgesic activities. These facts indicate the scientific basis of Caesalpinia pulcherrima being used as a traditional medicine. However, further experiments may help to determine the pharmaceutical potentialities of the plant as a medicine.