ABSTRACT: Epilepsy is a disorder of the central nervous system. A seizure occurs when the brain’s nerve cells misfire and generate a sudden uncontrolled surge of electrical activity in the brain. Seizures can be controlled with modern medicines and surgical techniques and are found to have so many side effects. Natural products from folk remedies are an alternative source of anti-epileptic drugs with better safety and efficacy profiles. Rubiadin is an anthraquinone glycoside isolated from roots of Rubia cordifoia (Manjishta) known for a number of pharmacological activities. The present study was aimed to assess the anti-epileptic activity of isolated rubiadin from Rubia cordifolia. The evaluation of anti-epileptic activity was carried out with maximal electric shock (MES) and Pentylene Tetrazole (PTZ) models. Epileptic seizure were induced in mice of either sex and the challenged animals treated with Whole Rubia cordifolia root extract & isolated Rubiadin suspension at two doses 100 mg & 500 mg respectively. The isolated Rubiadin suspension at 500 mg dose showed significant reduction in MES and PTZ induced epileptic seizure which is compared with whole-plant extract in mice.

INTRODUCTION: Human beings have relied on natural products as a resource for drugs for thousands of years. Plant-based drugs have formed the basis of traditional medicine systems that have been used for centuries in many countries such as Egypt, China and India 1. Phytotherapy still plays an important role in the management of diseases, mainly among low-income populations of African and Asian extraction. In developing countries like Nigeria, the World Health Organization (WHO) recommended the initiation of programs designed to use medicinal plants more effectively in traditional health care systems 2.

Traditional medicine in many parts of the world relies on the use of a wide variety of plants species 3. Epilepsy is the third most common neurological disorder after stroke and Alzheimer's disease. Although new antiepileptic drugs have been available since late 1980s, refractoriness to treatment is still an important issue in epilepsy care. Current available anticonvulsant drugs can control epileptic seizures efficiently in about 50% of the patients and lead to improvement in another 25% whereas the remainders do not benefit significantly 4.

Furthermore; undesirable side effects of the drugs used clinically often render treatment difficult; so that demand for new types of anticonvulsants exists. One of the approaches to search for new antiepileptic drugs is investigation of naturally-occurring compounds, which belong to new structural classes.

The WHO estimated that approximately 80% of people with epilepsy live in developing countries and most of them do not get adequate medical treatment 5. The introduction of each new antiepileptic drug into the market raises valid expectations in patients and physicians for more effective treatment of epilepsy. Although safety, tolerability, and interactions are important, better efficacy is a crucial feature for a new antiepileptic drug 6. The medicinal plant is important sources of new chemical entities with potential therapeutic effects 7.

In the Indian traditional a system of medicine, various herbs have been used to treat epileptic seizures. Rubia cordifolia, belongs to family Rubiaceae, commonly known as Indian Madder and Manjistha in Sanskrit. It is a perennial, herbaceous prickly climber with long and cylindrical root with thin red bark. Various parts of Rubia cordifolia have been suggested in the Indian system of medicine for a number of diseases. The roots and stems are well known source of Anthraquinones. It is a species of flowering plant in the coffee family, Rubiaceae 13. R. cordifolia is an important medicinal plant commonly used in the traditional and Ayurvedic system of medicine for treatment of different ailments. It is highly valuable plant in Ayurvedic system of medicine used for treatment of various skin diseases 14, 15.

Rubiadin is a major component of R. cordifolia Linn. and found to possess hepatoprotective and antioxidant property 16, 17. The prime objective of the present research was to explore and establish the possible antiepileptic potential of rubiadin from the root of R. cordifolia.

Collection and Authentification of Plant Material: Dried roots of Rubia cordifolia were collected from the local source (Ghaziabad) in the month of June and authenticated by NISCARE New Delhi. A voucher specimen was deposited at the Raw material Herbarium & Museum, Delhi (RHMD) CSIR-NISCAIR Reference No. –NISCAIR/RHMD/Consult/2013/2267/48.

Extraction and Isolation of Rubiadin: The roots of Rubia cordifolia were subjected to a fine powder and 500g powder was extracted with ethanol. After complete extraction the extract was concentrated and dried under reduced pressure to the dryness in flash evaporator. After drying extract was weighed and calculated the percentage yield.

Thin Layer Chromatography: Thin layer chromatography on TLC plates using silica gel 60 was used as a stationary phase. The ethanolic extract was spotted on TLC and eluted with Methanol: Ethyl acetate (1:1) as solvent system. The TLC was developed by Iodine. A major spot (yellow-orange) appeared with Rf 2.5 Fig. 1 after which it was poured into the column.

Column Chromatography: Silica gel was suspended in the required solvent and left for approximately 2 h to swell after which it was poured into column. The ethanolic extract of 1g was suspended in the minimum amount of the particular solvent in which it would dissolve and filtered to remove impurities and any large particles which cause diffusion problems whilst developing the column. This fraction was applied to the top of the column using a pipette with great care as not to disturb the top of the column.

After application, the solvent flask was raised to facilitate solvent flow into the column and was run using gravitational force. The column was left to run overnight at a flow rate of 0.5 ml/min.

Animals: Swiss albino mice weighing 18-25 g were used for the present study. The animals were maintained under controlled conditions of temperature (22 ± 2º), humidity (50 ± 5%) and 12 h light-dark cycles. The animals were housed individually in sanitized poly­propylene cages containing sterile paddy husk as bed­ding. They were fed with commercial diet and water ad libitum. Laboratory animal care was taken as per our Institutional Animal Ethical Committee (SETCPD/ IAEC/409/2010).

Acute Toxicity Study: Acute toxicity was conducted on Swiss albino mice weighing between 18-25 g using staircase/up and down method. The acute oral toxicity study was carried out according to OECD guidelines 423. First one animal is dosed with 100 mg/kg body weight. If animal dies a much lower dose is tested. If animal survives, then two more animals are dosed, after 48 h observation of the first animal.

If survives, then the main test should be terminated. If animal dies, two more animals are dosed and observed. The study was performed with an initial dose of 100 mg/kg body weight. The dose sequences followed were 100, 200, 500, and 1000 mg/kg body weights. Animals did not show any significant toxicity at 1000mg/kg.

PTZ Induced Convulsions: In this experiment, carboxymethylcellulose (CMC, 1%) and diazepam (4 mg/kg) was used as vehicle and positive control, respectively. Rubia cordifolia plant extract at the dose of 100 mg/kg, b.w. & Rubiadin suspension (100 mg & 500 mg) were administered orally to the animals three days prior to the PTZ induction at the dose of 80 mg/kg, b.w. (minimal dose needed to induce convulsions). Then after three days PTZ was injected i.p. to induce clonic-tonic convulsions in mice. After induction of PTZ the following parameters (onset of jerks, onset of clonus, Straub's tail and extensor) were observed carefully and blindly with the help of digital stopwatch.

Maximal Electro Shock (MES) Induced Seizures in Swiss Albino Mice: In this method, the animals were randomized into 6 groups (6 mice/group).

Maximal electroshock seizure model was used to evaluate the anticonvulsant activity of the test samples in this study. Seizures were induced in mice by delivering electroshock of 50 mA by means of an electro-convulsometer through a pair of ear clip electrodes. The test animal (n=6) received test samples orally, and standard group received phenytoin (25 mg/kg) i.p and tested after 30 min for MES induced seizure response. Prior to delivery, the current output was checked by a multimeter. After the electric stimulation occurrence the duration of phases was noted and HLTE (Hind Limb Extension) phase was compared with control group. The decrease in duration of HLTE was calculated as protective action.

Statistical Analysis: All results were expressed as mean ± SD. For analyzing the variations in the observation of seizures between plant treated mice and control, students’’ test was used. Data were analyzed using Dunnett’s tests. P<0.05 was considered statistically significant in all cases.

FIG. 2 AND 3: EFFECT OF RUBIA CORDIFOLIA EXTRACT & RUBIADIN SUSPENSION ON PTZ INDUCED ONSET OF JERK AND STRAUB TAIL IN MICE 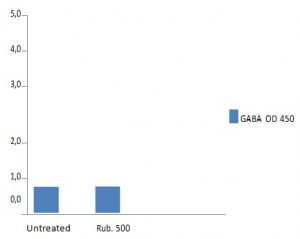 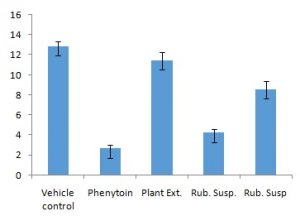 PTZ Induced Epilepsy: The anticonvulsant activity of a compound is generally assessed by its ability to prevent the convulsions, to delay the onset of seizures and also shorten the duration of convulsions, spread of seizure discharge through neural tissue within the brain and central nervous system or elevating the seizure threshold. The MES test is considered to be a predictor of likely therapeutic efficacy against generalized tonic-clonic seizures whereas the PTZ test represents a valid model for human generalized myoclonic and also absence seizures.

The PTZ is a known convulsant and the anticonvulsant activity in PTZ test identifies compounds that can raise the seizure threshold in the brain. Prevention of seizures induced by PTZ and MES in laboratory animals is the most commonly used preliminary screening test to characterize potential anticonvulsant drugs.

In this study, the onset of action in the untreated group was 43.5 ± 2.6, while it was significantly delayed by 457.93% in the positive control (diazepam) group (242.7 ± 30.7). Moreover, rubiadin suspension at higher concentration (500 mg/kg, p.o.) showed a significantly delayed the onset of action by 124.83% as compared to the untreated group. Besides, the whole plant extract (at 100 mg/kg, p.o.) and rubiadin suspension at lower concentration (at 100 mg/kg, p.o.) per se did not show any effects on delaying the onset of jerking seizures movement.

Additionally, inflation of tail due to the mechanical contraction of the dorsal sarco-cosygeus muscle and electrical stimulation of spinal cord elicited tail elevation such as straub tail reaction (STR) or simply called as straub tail. This straub tail was initiated at 60.2 ± 7.5 seconds in the untreated group, while it was significantly delayed by 453.65% in the positive control group (333.3 ± 11.5 seconds). Further, rubiadin suspension at higher concentration (500 mg/kg, p.o.) showed a significant delayed STR by 50% as compared to the untreated group. Besides, the whole plant extract (at 100 mg/kg, p.o.) and rubiadin suspension at lower concentration (at 100 mg/kg, p.o.) per se did not show any effects on delaying the inflation of the STR.

The result obtained in the present study showed that the rubiadin suspension 500 mg was able to delay PTZ- induced seizures and it is probable that it may be interfering with GABAergic mechanism to exert its effect. GABAergic system plays a major role in the pathophysiology of cerebral ischemia, epilepsy, sleep, and mood disorders. Estimation of GABA level in brain tissues will be a great tool in neuroscience research.

In the present work the results show minimal alteration in the level of GABA Fig. 6.

MES Induced Epilepsy: The MES test is the most frequently used animal model for identification of anticonvulsant activity of drugs for the generalized tonic-clonic seizures /"Grandmal”.

CONCLUSION: The Herbal drugs are always the best way to cure any disease because of their availability and less side effects. The isolated rubiadin, at higher dosage given better effects in both pentylenetetrazole & maximal electric shock models.

In conclusion, from the above study, rubiadin at a dose of 500 mg/kg may have potential anti-convulsant activity compared to the lower dose group of rubiadin and whole plant extract in Swiss albino mice compared to the untreated group.

Future Perspective: The isolated compound is Rubiadin which is an anthraquinone glycoside, has shown better effect as anticonvulsant. As from the earlier review of literature it has been seen that the triterpenes of Rubia cordifolia have shown effective against epilepsy, therefore in future, if combination of both i.e. Rubiadin & the triterpene part studied in combination then it might have the possibility to have synergistic effect for the treatment of epilepsy.

ACKNOWLEDGEMENT: The authors are thankful to the Management of Sanskar College of Pharmacy & Research for providing necessary facilities to carry out this work.