ABSTRACT: Objectives: To retrospectively determine the prescription pattern of antiepileptic drugs (AEDs), hematobiochemical changes, and associated adverse effects. Methodology: A retrospective observational study was conducted at the Department of Neurology, King Fahad Hospital of the University, Khobar, KSA. Data Collection was through Electronic Health Record. A designed validated form to record demographic characteristics, hematological-biochemical parameters and adverse effects were utilized. Results: 115 patients were recruited. 54 (44%) were female and 64 (56%) were male. Carbamazepine; CBZ (n = 47; 40.9%) and Valproic acid; VPA (n = 32; 27.8%) were the most frequently prescribed antiepileptic drugs (AEDs). While CBZ + VPA (n = 21, 18.3%) was the most frequently prescribed combination. Generalized seizures were more frequently diagnosed (n = 80, 70%) compared to partial seizures (n = 22, 19%). The hematological abnormalities manifested as reduction in levels of Hemoglobulin (Hg), Hematocrit, Mean corpuscular volume (MCV), Mean corpuscular hemoglobin (MCH) with all AEDs, while CBZ treatment was additionally associated with reduction in Mean corpuscular hemoglobin concentration (MCHC). The combination of CBZ + VPA revealed same effect on hematological parameters except that Hematocrit was not reduced in combination therapy. Dermatitis was observed with the use of CBZ while hearing loss was observed with VPA and PHT. Conclusion: Judicious prescription of AED is required, especially when a significant proportion of patients experience hematological, CNS and other adverse effects.

INTRODUCTION: Epilepsy is usually defined as a tendency to recurrent seizures. The word “epilepsy” is derived from Latin and Greek words for “seizure” or “to seize upon” 1.

It occurs in both sexes, at all ages, especially in childhood, adolescence, and progressively in aging populations 2. Epilepsy is also known to exhibit gender-related pathophysiology 3. The incidence (the number of new cases per year) of epilepsy is 24-53 per 100 000 population in developed countries 4.

There are few incidence studies in developing countries, which reported rates from 49.3 to 190 per 100 000 populations 5. Higher incidence rates in developing countries are thought to be attributable to parasitosis particularly neurocysticercosis, HIV, trauma, perinatal morbidity, and consanguinity. The prevalence (the total number of cases at a particular point in time) of active epilepsy in a large number of studies has been shown to be fairly uniform at 4–10 per 1000 population 6. Epilepsy is also common in Saudi Arabia, with a prevalence of 6.54 per 1000 7. Despite the use of one or more antiepileptic drugs (AEDs) 20-30% of patients remain refractory towards AEDs, and 30-40% have associated psychiatric disturbances 8, 9. Based on a study carried out in the neurology outpatient clinics of the King Fahad Hospital of the University, KSA, throughout 1-year between October 1, 2014 and September 30, 2015. Among all patients that visited the neurology clinic, 2076 patients presented with neurological disorders with epilepsy and seizure disorders (37.71%) predominating the list 10.

A pharmacoepidemiologic study in Oman reported that generalized seizures are the most common epileptic seizures. The selection of the AEDs corresponded well with their known efficacy profiles for specific seizure types. Monotherapy with Valproic acid (VPA) and Carbamazepine (CBZ) was commonly prescribed 11. The study from Colombia also reported that monotherapy with conventional antiepileptics was the most widely used therapeutic approach in their population 12. The introduction of newer AEDs to the conventional drugs brings the total number of AEDs to 20 for use in common epilepsies 13, which indicates the possibility of 200 duo-therapies or more than 1000 combinations of 3 AEDs. The refractory epileptic patients take 2, 3 or even 4 AEDs, whereby the intensification of adverse effects cannot be neglected 14.

AEDs are associated with hematological disorders, which range from mild thrombocytopenia or neutropenia to anemia, red cell aplasia, until bone marrow failure. Fortunately, potentially fatal hematological disorders such as aplastic anemia are very rare 15. The various hematological alterations associated with older anticonvulsant drugs are aplastic anemia and agranulocytosis with Carbamazepine (CBZ)/Phenytoin (PHT) 11, 12, neutropenia and leucopenia with Phenytoin (PHT) and thrombocytopenia with Valproic acid (VPA) 16. Although CBZ and PHT were reported to be associated with aplastic anemia, the International Agranulocytosis and Aplastic Anemia Study (IAAAS) provided insufficient data to evaluate this specific association 17, 18. VPA-associated impairment of homeostasis has been known for about 30 years; however, the clinical relevance of thrombocytopenia, abnormal platelet function is still unclear and controversial 19. The mechanism underlying drug-induced thrombocytopenia seems to be immune-related, with the development of drug-dependent antibodies to platelets and secondary platelet destruction 20. Hence, we aimed to study prescription pattern of AEDs along with their negative effects on hematobiochemical parameters and incidence of adverse effects in a way to suggest suitable drug combinations or measures to overcome the same and increase clinical response.

Study Design: This retrospective study included 115 patients with epilepsy recruited at Department of Neurology, King Fahd Hospital of University, Khobar (Eastern province of Saudi Arabia) from Dec 2017 to April 2018. Inclusion criteria were as follows: 1) Epilepsy diagnosis (according to the International League against Epilepsy criteria, 1989). 2) Use of Carbamazepine (CBZ), Valproic acid (VPA), Phenytoin (PHT) alone or in combinations, as part of antiepileptic drug regimen. 3) Adults, Geriatrics and children subjects of either gender. While patients who received; CBZ, VPA & PHT for indications other than epilepsy were excluded from the study. The study was initiated after approval from the Institutional Ethical Committee, IAU. 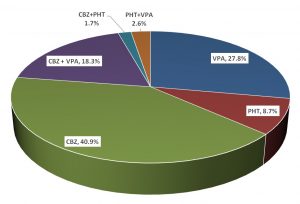 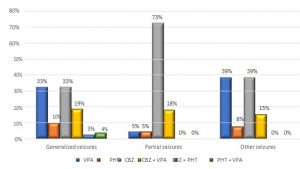 FIG. 2: COMMONLY PRESCRIBED ANTIEPILEPTIC DRUG ACCORDING TO TYPE OF SEIZURE

Adverse Effects with the Use of Antiepileptic Drugs (AEDs): We studied the pattern of adverse effects associated with the use of AEDs in 115 patients, AED-associated adverse effects noted among patients receiving CBZ (n=47) were Dizziness (4%), Myalgia & Myositis (4%), Gastritis (2%), Dyslipidaemia (4%), Anaemia (2%) and Dermatitis (2%). The patients on VPA (n=32) complained Dizziness (6%), Myalgia, Myositis (3%), Hearing loss (3%) and Gastritis (3%). While hearing loss (10%). The most common side effects associated with the use of these drugs involved the central nervous system. No mortality was ascribed to AED administration Table 3.

TABLE 3: ADVERSE EFFECTS WITH THE USE OF ANTIEPILEPTIC DRUGS (AEDs)

DISCUSSION: The present findings give the best estimate for the utilization of traditional AEDs at King Fahd Hospital of University, Khobar, KSA. CBZ (n = 47; 40.9%) and VPA (n=32; 27.8%) were the most frequently prescribed AEDs. While CBZ + VPA (n=21, 18.3%) was the most frequently prescribed combination in the group of patients included in our study (i.e. taking traditional AEDs). Apart from this, the hemato-biochemical abnormalities were associated with the use of AEDs. We found a reduction in levels of Hg, Hematocrit, MCV, MCH with all AEDs, while CBZ treatment was additionally associated with reduction in MCHC. Further, AEDs were associated with a range of common adverse effects. Dermatitis was observed only with the use of CBZ, hearing loss with VPA and PHT.

Significant progress in the classification, diagnosis, and pharmacologic management of epileptic seizures has occurred over the past two decades, the bioinspired nanocarriers are nowadays utilized to enhance the solubility and enable well-controlled sustained release profiles of AEDs 21–23, even the principles of quality by design (QbD) are implemented for successful product development 21, 24, 25, but still epilepsy remains a therapeutic challenge. Clinical studies show that most patients with epilepsy can have complete or almost complete seizure control with optimally managed monotherapy that employs a traditional antiepileptic drug (AED). About half of the remaining patients can obtain improved seizure control with combination antiepileptic drug therapy, but usually with more adverse effects. In the other half, seizures remain refractory to treatment with available antiepileptic drugs 26. In our study monotherapy with AEDs was the most common choice in the control of epileptic seizures.

The patients were prescribed with CBZ (n=47; 40.9%), VPA (n = 32; 27.8%) and PHT (n=10; 8.7%) as monotherapy. Further, for control of generalized seizures CBZ (33%) and/or VPA (33%) were prescribed, while for partial seizure control CBZ (73%) was preferred. The results from this study revealed that practice followed at Department of Neurology, KFHU is in accordance with current guidelines from the National Institute for Health and Care Excellence (NICE) in the United Kingdom 27.

The alterations in hematological parameters associated with the use of PHT are reported as thrombocytopenia 33, 34, leukopenia, neutropenia, agranulocytosis 35, 36, pancytopenia, pure red cell aplasia 37, 38 and aplastic anemia 39, 40. We found that CBZ, VPA, and PHT reduced Hg, Hematocrit, MCV, and MCH. In addition CBZ & VPA also reduced Neutrophils & Albumin. The combination of CBZ + VPA had similar effects on hematological parameters. The increase in levels was recorded with alkaline phosphatase (ALP) which confirms hepatotoxicity with the use of AEDs.

The biological importance of Folic acid is due to tetrahydrofolate and other derivatives like dihydrofolate produced from it in the liver by dihydrofolatereductase. This reductase enzyme is said to be blocked by AEDs 41. The anti-folate activity can also lead to reduction in hemoglobin (Hb%) 42. We observed that most patients receive folic acid as part of their therapy. A randomized clinical trial which evaluated the impact of Folic acid supplement to prohibit blood cell disorder in patients taking CBZ, reported fewer patients that received CBZ with Folic acid to experience leukopenia and low hemoglobin in contrast to the patients taking CBZ alone.

On the other hand folic acid had no effect on MCV, MCH, MCHC, platelet count, lymphocyte count and monocyte count in patients taking CBZ 43.

The AEDS are associated with the range of adverse effects; Carbamazepine (CBZ) is reported to cause somnolence, fatigue, rash, diplopia, dizziness and ataxia, low sodium, weight gain/edema 44, 45. We found similar results from our study given that patients receiving CBZ developed dizziness, myalgia, myositis, gastritis, dyslipidemia, anemia and dermatitis. Hyponatremia is a common problem in people receiving CBZ 46. We observed that only 5% of patients who take CBZ developed Hyponatremia. One cause of hyponatremia is inappropriate antidiuretic hormone (SIADH) secretion syndrome and has been associated with some drugs, including Carbamazepine (CBZ). Because of its antidiuretic effects, CBZ has been used successfully to treat diabetes insipidus centralis 47.

Thus, careful hematological monitoring is needed particularly when using traditional AEDs like CBZ, PHT, and VPA. The present study thereby provides valuable data of prescription patterns of AEDs and contributes to pharmacovigilance as it offers a basis of knowledge for national decision-making authorities in the field of drug utilization, for updating treatment guidelines and for monitoring of patient populations at risk of hematological abnormalities and adverse effects associated with the use of AEDs alone or in combinations.

CONCLUSION: In conclusion, monotherapy with antiepileptic drugs was preferred compared to combination therapies. Traditional AEDs are associated with hematological abnormalities, and adverse effects. Thus, regular monitoring of antiepileptic drug conc. in serum, to ascertain their effect on hematological parameters should be established. Importantly judicious use of AEDs is warranted.