ABSTRACT:Fertility control is an issue of global and national health concern, many study have been done for the male contraception. The use of medicinal plants in different sorts of disease including fertility problem is widespread throughout the world. Though considerable progress has been made the development of highly effective, acceptable and reversible methods of contraception among females, progress possibilities on males are still slow and limited. With recent progress towards a better understanding of male reproductive physiology there is needed to develop new contraceptive modalities for male. Abrus precatorius is one of the folk medicinal plants widely used as an antifertility agent in varius places of south Asian countries including Chittagong region of Bangladesh. The aim of the present study was to investigate the antifertility activity of abrus precarious seed extract intraperitonially administered in adult swiss male albino mice. The intraperitonial administration of 40, 80 and 80 mg/kg body weight of ethanolic seed extract of Abrus precatorius shown a highly antifertility activity which  done for two months. The lower concentrations (40 mg/kg body weight) of ethanolic seed extract of Abrus precatorius gave temporarily antifertility activity. But the higher dose (80 mg/kg body weight) gave relatively more permanent antifertility activity on swiss albino mice compare with the control.

INTRODUCTION: Antifertility is a term used for the prevention of pregnancy, and it is often referred to as birth control. The basic aim of antifertility drugs is to prevent conception or fertilization. These are the chemical substances used to control the pregnancy. There are drugs that control ovulation and if regularly consumed, function as effective contraceptives. Oral contraceptives belong to the class of natural products known as steroids. These control the female menstrual cycle and ovulation.

Plant Species: Abrus precatorius L. (Family: Fabaceae) is native to Indonesia and grows in tropical and subtropical areas of the world. It is a common plant in the forest areas of south Asian countries. It was collected from jewellery shop of Amjurhat, Patya, Chittagong. The Shopkeeper claimed that it was collected from Chittagong hill region (Bandarban forests) and authenticated by Bangladesh center for science and Industrial Research (BCSIR), Chittagong, Bangladesh. A voucher specimen has been present in the laboratory for future reference.

Therapeutic use: All of the part of the tree can be used in a variety of ways. Uses include abortificient, ache (head), antidote, aphrodisiac, bilious, bite (snake,) bladder, CNS-sedative, cold, colic, collyrium, conjunctivitis, consumption, contraceptive, convulsion, cough, diarrhea, diuretic, dysuria, emetic, emollient, enteritis, epithelioma, expectorant, expectorant, eye fatal, fatality, febrifuge, fever, fracture (veterinary), freckle, gastritis, gingivitis, gonorrhea, gravel. Abrus precatorius L. is one of the best antifertility regulating herbs being widely used in south Asian countries (Ross, 2005). A tea is made from the leaves and used to treat fevers, coughs and colds. In Siddha medicine, the white variety is used to prepare oil that is used as an aphrodisiac.

Seed: The seeds yield alkaloids, a fixed oil, steroids, lectin, flavonoids, and anthocyanins. The alkaloids of the seeds are abrin, hypaphorine, choline and precatorine. The oil content of seed is only 2.5%, which is rich in oleic acid and linoleic acids. α-sitosterol, stigmasterol, 5α-cholanic acid, abricin, and cholesterol are the steroids present. The colour of the seed is due to glycosides of abranin, pelargonidin, cyaniding, and delphinidin.

A sapogenol, abrisapogenol J, sophoradiol, its 22-O-acetate, hederagenin methyl ether, kaikasaponin III methyl ester, flavones such as abrectorin and aknone are the other constituents of the seeds. Lectins are the chief constituents of the seeds, the principal ones being abrin. Lectins are both toxic (abrin) and non toxic (abrus agglutinin). Abrins are denoted by abrin a, b, c and d and consist of one large â-polypeptide chain (MW. 35,000) and short á- polypeptide chain joined by disulphide bond.

Leaves:  The leaves which are sweet in taste contain up to 10% Glycyrrhizin, triterpene glycosides, pinitol and alkaloids such as abrin, hypaphorine, choline and precatorine. The triterpene glycosides are abusosides A, B, and C, (which are highly sweet) and three glycosides based on cycloartane-type aglycone, abrutogenin. Other compounds of the leaves are tritepenes, abrusgenic acid, abruslactone A and methyl abrusgenate and flavonoids vitexin, liquirtiginin-7-mono- and diglycosides and toxifolin-3-glucosides. (Journal of Pharmacy Research, Vol. 3, Issue 11, November 2010, Anand R. Attal et al.)

Root:  Root contains glycyrrhizin and alkaloids like abrasine and precasine besides abrin and related bases.

MATERIALS AND METHODS: The main objective of performing the antifertility screening is to determine the contraceptive activity of Abrus precatorius seed extract intraperitoneally administered on Swiss albino mice, in turn is used to selection of the compound as therapeutic agent.

The present study is designed to evaluate the antifertility activity of ethanolic seed extract of Abrus precatorius regarding daily sperm production with abnormality of male sperm and weight change as well as to determine the compound as effective contraceptive.

a)      A glass made jar with plastic cover was taken and washed thoroughly. The jar was rinsed with ethanol and dried.

b)      Then the dried sample of Abrus precatorius was taken in the jar.

d)      The plastic cover with aluminium foil was closed properly to resist the entrance of air into the jar.

e)      This process was formed for 7 days (on a shaker machine). The jar was shaken several times manually during the process to get better extraction.

f)       After the extraction process the Abrus precatorius plant extract was filtered with filter paper.

g)      The filter paper was rinsed with solvent and fitted in Buckner funnel.

h)      The filtrate was collected in a beaker.

i)        Extract sample was concentrated by evaporating the solvent using a water bath at a temperature of 60-70oC.

The extract are collected and kept it in a closed vessel which is preserved in the freezing condition. The crude extracts exhibit potent antifertility activity.

Test Materials used for the Study:

I)        The ethanol crude extract for the investigation of their antifertility activity.

II)      Solvent (ethanol) was used for dissolving the compounds.

Sample preparation from Extraction: Whole plant specimens with dried seeds were collected during the field trips and also procured from jewelry shop. The plant was verified by Pharmacognosy and Phytochemistry Laboratory, IIUC. An ethanolic seed extract was prepared using the cold extraction method (Adome et al., 2003). The seeds were coarsely powdered in electrical grinder. 500 gram of seed powder was soaked in 99.9% ethanol in a conical flask for 1 week and the contents were filtered. This filtrate was evaporated by using a water bath and then dried at room temperature. The dried mass was scraped at the bottom of the flask and stored at freezing condition. The yield of extract was 0.6% of the raw material. Three different doses of 40, 80 and 80mg/kg/BW were prepared from the stock solution, were calculated in next step.

Animals used for the Study: Adult Swiss albino mice of 30 - 35 days age (n = 8) were used. The mice were collected from the ICDDR, B; Mohakhali, Dhaka.

The mice weighing about 30-40 grams, was house in colony cages (4 mice per cage) at an ambient temperature of 25 to 27oC with 12 hours light and dark cycles having proper ventilation in the room. The mice were kept male and female in separate cages. They were fed normal diets purchased commercially from the vendors and water ad libitum. The animal was allowed to acclimatize to the laboratory environment for the one week and then divided into groups for experiments. The study was conducted by the permission of International Islamic University Chittagong for two months.

Preparation of the Dose: The samples were prepared according to the following procedure:

RESULT AND DISCUSSION: The antifertility effect of ethanolic seed extract of Abrus precatorius (Family: Fabaceae) was found in different concentration to the different Swiss albino mice. The treatment duration was total two months.

After 21 days of treatment, Group-I (control) reproduced seven mice, i.e., the control group female mice was got pregnant which was the evidence of fertility. On the other hand Group-II, III and IV mice did not reproduce any fertile action with this treatment procedure.

Thus, it was assumed that ethanolic seed extract of Abrus precatorius induced a highly significant decrease in testicular sperm count and daily sperm production in all the treatment groups compared to Control.

TABLE 1: WEIGHT OF THE MICE BEFORE TREATMENT OF ETHANOLIC SEED EXTRACT AND DOSE OF THE MICE WITH WEIGHT

TABLE 2: WEIGHT OF THE MICE AFTER TREATMENT OF ETHANOLIC SEED EXTRACT 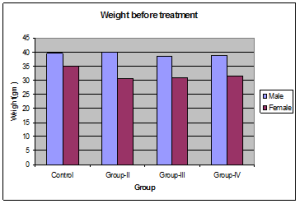 FIG. 1: WEIGHT OF THE ALBINO MICE BEFORE TREATMENT 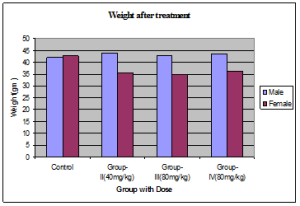 FIG. 2: WEIGHT OF THE ALBINO MICE AFTER TREATMENT

Present studies indicates that the role of seed extract of Abrus precatorius as a contraceptive or antifertility agent.