ABSTRACTCandida albicans is one of the most important fungi associated with oral candidiasis and the treatment of this fungi is a serious problem today because of the resistance of these fungi against conventionally used drugs. So, there is an urgent need of alternative antifungal substances especially from the natural sources. The study was conducted to examine the MFC and time kill activity of two stilbenes [3, 4', 5-trihydroxystilbene (1) and 3,5-dihydroxy-4-isopropylstilbene (2)] purified from a bacterium associated with entomopathgenic nematode against C. albicans. The activity was also compared to amphotericin B. The cytotoxicity of stilbenes was also tested against normal human cell lines (L231 lung epithelial and FS normal fibroblast). Results showed that stilbenes was effective against C. albicans with MIC and MFC of 64 and 128 µg/ml for compound 1 and 32 and 64 µg/ml for compound 2. The time kill assay of stilbenes against C. albicans was more effective than amphotericin B. No cytotoxicity was recorded for stilbenes upto 200 µg/ml. The strong antifungal activity and low cytotoxicity of stilbenes make it a promising agent for the treatment of Candida

INTRODUCTION:Candidiasis, the main opportunistic fungal infection has steadily increased over the past 30 years 1, 2. Among the many species, Candida albicans is the most important pathogen and oral candidiasis is an oral lesion caused by this organism. It has been estimated that more than 90% of human immunodeficiency virus (HIV) infected patients develop oral candidiasis often debilitating infection at some time during the progression of their disease 3, 4.

Infections caused by C. albicans in immune competent individuals may include oral thrush, vulvar rash, vaginitis, conjunctivitis, endophthalmitis, diaper rash, and infections of the nail, rectum, and other skin folds 5. Candidas were severely affected in the treatment of patients with acute 6.

Candida spp. are the fourth leading cause of nosocomial infections in the USA and elsewhere in the world, and in those patients with candidemia, the attributable mortality rate is up to 35% 7.Treatment of this fungal infection presents several problems. Besides the toxicity presented by amphotericin B, the widespread use of antifungal agents induced resistance to amphotericin B 8, 9.

Therefore, the clear understanding of the pharmaco-dynamic properties of antifungal agents is important for the improvement of the treatment of oropharyngeal candidiasis. However, the choices are still limited, especially due to the resistance because of the increase in the use of drugs. For this reason identification of new drugs from natural sources are needed to fight against the candidal infection in future.

In the course of studies on EPN, a new entomo-pathogenic nematode belonging to the genus Rhabditis and subgenus Oscheius was isolated from sweet potato weevil grubs collected from Central Tuber Crops Research Institute (CTCRI) farm, Thiruvananthapuram. The bacterium associated with the EPN was identified as Bacillus sp. The cell free culture filtrate and the two stilbene compounds isolated from this bacterium were found to have antifungal activity 12.

In this paper, we reported the MFC and time kill activity of two stilbene compounds against  C. albicans. The activity of stilbenes was also compared with that of amphotericin B, an antifungal agent commonly used.

Test compounds: The test stilbene compounds [3,4',5-trihydroxystilbene (1) and 3,5-dihydroxy-4-isopropylstilbene (2) (Fig. 1)] were isolated and purified from the cell free culture filtrate (Tryptic soya broth) of a bacterium associated with a novel EPN, Rhabditis (Oscheius) sp. and chemical structures of the compounds were established on the basis of spectral analyses. 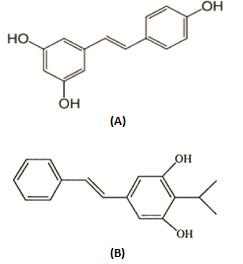 Candidal culture and Antifungal Agent: The Candida strain used in the study was Candida albicans MTCC 277 and was subcultured in potato dextrose agar and broth (Himedia Laboratories Limited, Mumbai, India) at 37oC. Amphotericin B (Sigma) was used as a standard anticandidal agent.

Antifungal assay: The macro broth dilution method was adopted to determine the susceptibility of stilbenes against C. albicans. The stock solutions of the stilbenes were dissolved in DMSO. The tubes containing potato dextrose broth of varying concentrations of stilbenes were inoculated with actively growing C. albicans. The initial density of the Candida was 3×106 colony forming unit (CFU)/ml. After 24 h incubation, the growth was monitored both visually and calorimetrically (600 nm). The MIC was defined as the lowest concentration required to arrests the growth of the fungi at the end of 24 h. For determining MFC, a 0.01 ml aliquot of the culture medium was drawn from the tubes showing no visible growth at the end of the 24 h incubation and plated on potato dextrose agar. The plates were incubated further for the appearance of fungal colonies. The MFC was defined as the lowest concentration of the antifungal agent that reduced the number of visible organisms by 99.9% 13.

Time Kill Assay: The potential of compound carryover during the plating process were determined by following 14. Dilutions yielded a starting inoculum of approximately 1×106 CFU/ml. The antifungal activity of compounds was studied over a range of multiples of MIC ie. 1×MIC to 4×MIC. Tests were performed at 0, 2, 4, 6, 12 & 24 h. 100 µl sample was removed from each test suspension, serially diluted in sterile saline and plated on potato dextrose agar plates for colony count determination. Plates were incubated at 37oC for 24 h. The broth without any agent was used as the control for Candida growth at each time point. The data were plotted as log CFU/ml versus time (h) for each time point. Tests were performed three times.

Cytotoxicity Test: The MTT (3-(4, 5-dimethyl thiazol-2-yl)-2, 5-diphenyl tetrazolium bromide) assay was used to determine the cytotoxicity of stilbenes. L231 lung epithelial cell and FS normal fibroblast cell line were used for testing. MTT assay is based on the ability of mitochondrial dehydrogenase enzyme from viable cells to cleave the tetrazolium rings of the pale yellow MTT and to form dark blue formazan crystals which are largely impermeable to cell membranes, thus resulting in its accumulation within healthy cells. Solubilization of the cells by the addition of a detergent results in the liberation of the crystals. The number of surviving cells is directly proportional to the level of the formazan product formed. The colour can then be quantified by a simple colorimetric assay using a multi-well scanning spectrophotometer (ELISA reader).

Briefly, cells (5x103 /well) were seeded in 0.2 ml of the medium (DMEM with 10 % PBS) in 96 well plates, treated with drugs for 72 h. and after incubation, cytotoxicity was measured. For this after removing the drug containing media, 25 µl of MTT solution (5 mg/ml in PBS) and 75 µl of complete medium were added to wells (untreated and treated) and incubated for 2 h. At the end of incubation MTT lysis buffer was added to the wells (0.1 ml/well) and incubated for another 4 h. at 37°C. At the end of incubation, the optical densities at 570 nm were measured using a plate reader (Bio-Rad). The relative cell viability in percentage was calculated (A 570 of treated sample/A 570 of untreated sample x100) 15.

TABLE 1: THE MIC AND MFC (µg/ml) OF STILBENES AGAINST C. ALBICANS COMPARED WITH AMPHOTERICIN B 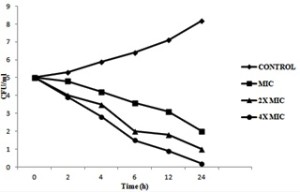 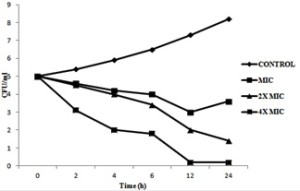 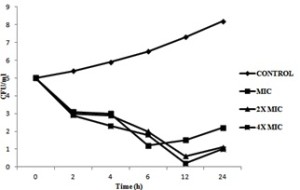 A- Compound 1, B- Compound 2 and C- Amphotericin B

The cytotoxic activity of stilbenes was tested against FS normal fibroblast and L231 by MTT assay. The data showed that there is no significant reduction in the number of cells up to 200 µg/ml (Fig. 3). 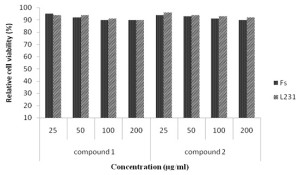 DISCUSSION: Candidal yeasts constitute a part of the normal oral flora and are considered as harmless commensal microbes in the oral cavity. However, this opportunistic yeast species could induce oral infections when the ecological balance is disturbed causing changes in host defense mechanisms 16. Oral candidiasis is most commonly associated with individuals infected with the human immunodeficiency virus, and it is also seen in infants, patients with diabetes mellitus, and those receiving broad-spectrum antibiotics 17. The emergence of resistant candidal strains towards antifungal agents has increased great concern among scientists, medical and dental practitioners, and this has lead to the search of new antifungal agents from natural resources especially from microbes. Natural products are currently in great demand for research purposes due to the huge and extensive biological properties which has medicinal and commercialization values.

The activity of compound 2 was more effective than amphotericin B. For nearly 50 years, amphotericin B has been employed as a potent fungicidal agent to treat many serious fungal infections. However, the use of amphotericin B is limited because of high toxicity to the patient such as in bringing about hemolytic effect 20. For the time kill assay, we compared the antifungal activity of stilbenes with that of amphotericin B in order to find out the efficiency of the stilbene compounds against oral candida.

The time killing activity of compound 2 was more effective than compound 1 and amphotericin B. However we found that regrowth was observed for amphotericin B after 12 h. This might be due to the onset of these agents was not longer than 12 h. On the other hand, stilbenes exert rapid action even after 12 h. This property makes stilbenes a promising antifungal agent against oral candida. Furthermore, additional information from further studies on the mechanism of action of stilbenes, might contribute to its use as an alternative to the conventional antifungal drugs for the management of candidiasis. Therefore, stilbenes have a great potential to be considered in the development of oral health care products.

The emergence of higher resistance level of C. albicans and the non-C.  albicans (NAC) species towards many commonly prescribed antifungal agents has become a great concern to society 21. This is said to be due to the consequence of the heavy usage of antifungal agents such as amphotericin B and fluconazole 22. Therefore, there is an increased need in obtaining alternative antifungal substances which can act effectively against oral Candida sp.

ACKNOWLEDGEMENTS: The authors are grateful to Indian Council Medical Research (ICMR), Government of India for funding. We thank the Director, CTCRI, for providing facilities for the work.