ABSTRACT: Adenia lobata Engl (Passifloraceae) is a woody climber which grows in most African countries mainly the coastal belt. It is an important medicinal plant used to treat haemorrhoids, malaria, fever, diabetes and gonorrhea. In our attempt to find out the constituents of this medicinal plant, the dried stem powder of A. lobata was successively extracted by Soxhlet with petroleum ether and 70% ethanol to obtain the crude petroleum ether (PEAL: yield =1.1w/w %) and ethanol (EEAL: yield = 5.4 w/w %) extracts.  The antihyperglycaemic activity of PEAL and EEAL were determined in streptozotocin-induced diabetic rats (70 mg/kg body weight). The ethanol extract was most active and was subjected to chromatographic separation to isolate its chemical constituents. The isolated compounds were identified using NMR spectroscopic namely 1H, 13C NMR, COSY, HSQC and HMBC Spectroscopy with reference to literature. Two compounds isolated from the extract were found to be, palmitic acid and g-hydroxy-d-valerolactone. To the best of our knowledge, this is the first time these compounds are reported from this medicinal plant.

INTRODUCTION:   Diabetes mellitus is a chronic metabolic disorder in which the pancreas does not produce enough insulin to meet the body's needs or the body cannot properly use the insulin that is produced 1.

In Ghana, the prevalence rate is estimated to be 6.3%, with women at higher risk of having the disease 2 whereas worldwide projection is estimated to be 6.0% 3-4.  The cost of controlling a diabetic case in Ghana annually has increased from $180-420 in 2001 to $1276-7660 in 2007 5 and the economic cost of controlling diabetes using orthodox drugs in the world is estimated to be $232 billion and will cost $302.5 billion by 2025 3-4.  Diabetes has become a public health problem globally and most of these medicinal plants used in the treatment of this disease in traditional medicine have no scientific documented information.

It is therefore imperative to investigate such medicinal plants used in traditional treatment of various diseases 6. These medicinal plants which show promising activity can then be standardised and formulated.  This will facilitate the promotion of rational use of quality, safe and efficacious traditional remedies. This work seeks to provide the scientific knowledge of antihyperglycaemic activity on the stems of A. lobata used in the traditional treatment of diabetes, fever and malaria 7.

Plant material: The stem of Adenia lobata Engl was collected from Bobiri forest in December 2009 by Mr Osafo Asare, a herbalist. Authentication was done at the Department of Botany, University of Ghana, Legon by Mr. Amponsah. Voucher specimen (KNUST/HM1/2010/S-005) has been deposited at the Faculty of Pharmacy and Pharmaceutical Science Herbarium.

Extraction: The stem of A. lobata was air-dried for ten days at room temperature and milled into a coarse powder. The powder (650.0 g) was Soxhlet extracted sequentiallyusing petroleum ether (PEAL) and 70% ethanol (EEAL). The extracts were concentrated to viscous liquids under reduced pressure using a rotary evaporator. The viscous liquids were further evaporated to solvent-free, semi-solid masses over water bath (yield; PEAL: 1.1 w/w %, EEAL: 5.4 w/w %) and kept in a desiccator until needed for use. Large scale Soxhlet extraction by 70% v/v ethanolwas done for 3 kg of the powder.

Phytochemical Screening: The preliminary phytochemical evaluation of part of powdered stem of A. lobata was done using standard methods as described by 8.

Animals: Adult male sprague-dowleyrats (280-295 g) were housed at a standard condition of room temperature and supplied with standard pellet food with tap water ad libitum in animal house at Department of Pharmacology.  The rats were obtained from the Centre for Scientific Research into Plant Medicine at Mampong-Akwapim, Ghana. All rats were treated in accordance with the National Institute of Health Guidelines for the care and use of laboratory animals 9.

The research protocol was approved by the College of Health Sciences Ethics Committee.

Induction of diabetes in rats using streptozotocin (STZ): The bioassay model employed was according to the description of 10 with some modification.The normal blood glucose level of the rats was taken and was found to be in the range of (3.8-4.9 mmol/l). Rats were injected intraperitoneally with a single dose of 70 mg STZ per kg body weight after an overnight fast. After injection, rats were given free access to feed and water. After a rest period of 48 hours, diabetes was confirmed by determing the fasting blood glucose levels. Rats with blood glucose level above 10.0 mmol/l were selected for the experiment.

B1 was further column chromatographed using petroleum ether and ethyl acetate (20:80).  This led to the isolation of compound AL 2 (810 mg) which appeared as single pink spot.  The Rf value for AL 2 was 0.64 in petroleum ether: ethylacetate: methanol (0.5: 4.5: 0.5). Schematic representation of the fractionation of the stem of A. lobata is shown in Figure 1. 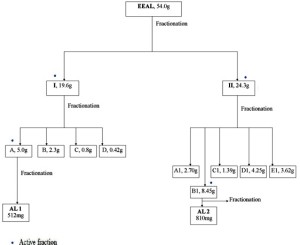 FIGURE 1: SCHEMATIC REPRESENTATION OF CHROMATOGRAPHIC FRACTIONATION FOR EXTRACTING THE POWDERED STEM OF A. LOBATA

The glucose level was subsequently monitored at three days interval basis over the next 24 days.  Blood samples were collected from tail vein of the rats and Accu-Chek® glucometer (Roche Diagnostics GmbH, Mannheim Germany) was used to measure the glucose level. Throughout the study period, rats received unrestricted access to standard feed and water.

Statistical Analysis: All the data provided in this study represents means ± S.E.M. The results were analysed by one-way ANOVA followed by Bonferroni’s multiple comparison test to establish significance (p< 0.001) between the treated and the control groups.

Phytochemical Screening: The results of the phytochemical screening on the powdered A. lobata are shown in Table 1.

TABLE 1: RESULTS OF THE PHYTOCHEMICAL SCREENING OF POWDERED A. LOBATA

TABLE 2: EFFECT OF EEAL IN STREPTOZOTOCIN-INDUCED DIABETIC RATS AFTER 6 HOURS

Characterisation of AL 1 and AL 2 isolated from EEAL extract: AL 1 (512 mg) was isolated as a white crystalline compound. It was insoluble in water and had a melting point of 64-65ºC compared to the literature value of 62.9ºC 11. It gave a blue spot on a silica gel chromatogram when sprayed with anisaldehyde and heated at 110ºC for five minutes. It had an Rf  value of 0.82 in pet-ether: EtOAc (1:4).

Using COSY, HSQC and HMBC spectra, partial structure of AL 1 was formed.  However, the 1H and 13C data of AL 1 favorably compared with those reported by 12.  This led to the proposed structure of AL 1 as palmitic acid, which was confirmed with an authentic sample by co-tlc chromatography.

The structure was established as the known g-hydroxy-d-valerolactone, by examining the 1H and 13C NMR spectrum and other 2D-NMR spectra such as COSY, HSQC-DEPT, NOESY and HMBC.

The HSQC, COSY and HMBC spectra led to the proposed structure AL 2, which favourably compared with those reported by 14. 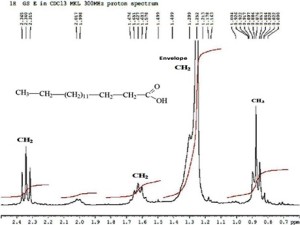 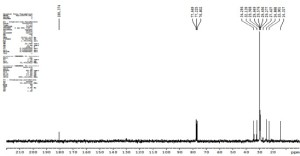 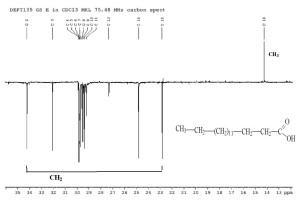 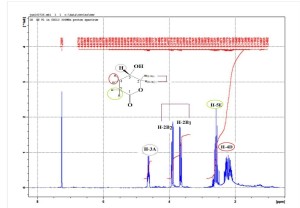 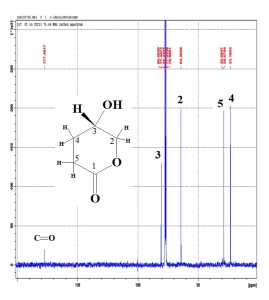 TABLE 4: EFFECT OF AL 1 IN STREPTOZOTOCIN-INDUCED DIABETIC RATS AFTER 6 HOURS

All values are expressed as mean ± S.E.M. (N=5); Number in the parentheses denotes percentage reduction (blood glucose level) after 6 hours; Compound AL 1 isolated from the stem of A. lobata; GB = Glibenclamide; AL 1 treated groups were compared with control group (p< 0.001)

CONCLUSION: This study has revealed that the ethanol extracts of A. lobata and the isolate palmitic acid exhibited promising antihyperglycaemic activity in streptozotocin-induced diabetic rats.  This research therefore provides support to the use of A. lobata by indigenous people in the management of diabetes in Ghana.

ACKNOWLEDGEMENT: The authors are grateful to Centre for Scientific Research into Plant Medicine at Mampong-Akwapim, Ghana, Department of Pharmacognosy and Herbal Medicine, School of Pharmacy, University of Ghana, Legon and Department of Pharmacognosy, Faculty of Pharmacy and Pharmaceutical Sciences, College of Health Sciences, Kwame Nkrumah University of Science and Technology, Kumasi-Ghana for providing support for this study.