ABSTRACT: Croton membranaceus (Mull. Arg.) Euphorbiaceae is a shrub that grows wild in West Africa. It is used by Ghanaian Traditional Medical Practitioners in the treatment of benign prostatic hyperplasia (BPH).  Research findings have provided some scientific bases for the use of this plant in the treatment of BPH. Therefore, the aim of the present study was to investigate the antihyperglycaemic and antioxidant activities of C. membranaceus. There isalso evidence suggesting an association between BPH and diabetes through a common pathogenic mechanism. Research findings also suggest that oxidative stress may be one of the major factors responsible for the development of BPH and diabetes. The antihyperglycaemic activity of three different doses (100, 300, 600 mg/kg body weight) of the ethanol (70 %) extract of C. membranaceus root was studied in streptozotocin-induced diabetic rats. The antioxidant activity of the ethanol extract of C. membranaceus root was also investigated using the spectrophotometric 1,1-diphenyl-2-picrylhydrazyl (DPPH) radical-scavenging method. C. membranaceus root extract showed a dose-dependent reduction of glucose levels over both short term and long term treatment period. This study also provided evidence that C. membranaceus root has significant antioxidant properties. These findings demonstrate for the first time the potential of C. membranaceus extracts in the management of type 1 diabetes mellitus and diseases in which oxidants or free radicals are implicated.

INTRODUCTION:The World Health Organization (WHO) estimates that around 80% of the world’s population in developing countries relies on traditional medicines for primary healthcare needs, of which a major proportion corresponds to herbal medicines 1

In many developed countries, traditional medicine is increasingly being used in parallel to allopathic medicine, particularly for treating and managing chronic diseases 2. These herbal preparations are generally considered to be less toxic as compared to synthetic drugs. However, most of the preparations have not been evaluated scientifically for safety and efficacy. It is therefore imperative to investigate scientifically such preparations used in traditional medicine for the treatment of various diseases 3. Scientific investigation may provide the necessary information required to promote the rational use of medicinal plants/herbal medicines.

Croton membranaceus (Mull. Arg.) Euphorbiaceae is a shrub that grows wild in West Africa in areas close to the river Volta and the river Niger in Ghana and Nigeria respectively.  It is one of the main ingredients in an herbal medicine dispensed at the Centre for Plant Medicine Research (CPMR) in Ghana, for the treatment of BPH 4.  It has been observed that when a tincture of C. membranaceus roots is diluted and drunk by BPH patients, urination is enhanced without the accompanying difficulty 4.

The aqueous extracts of C. membranaceus root and stem have also been found to inhibit testosterone induced growth of the rat prostate 5. Since there isevidence suggesting an association between BPH and diabetes through a common pathogenic mechanism 6, it is important to study the anti-hyperglycaemic effect of C. membranaceus. Research findings by 7 and other research groups suggest that oxidative stress (oxidant-antioxidant imbalance) may be one of the major factors responsible for the development of BPH 8-9.

Oxygen free radicals are also known to be involved in the onset of diabetes 10, hence the need to study the antioxidant properties of C. membranaceus. To the best of our knowledge no antihyperglycaemic or antioxidant studies has been done on C. membranaceus. This study forms part of a wider research with a view to exploring the potential biological activities of this important medicinal plant.

Plant material: The roots of C. membranaceus were harvested at the Krobo-Gyakiti area in the Eastern Region of Ghana and identified at the herbarium of the CPMR by Mr. Blagogee, a taxonomist. Voucher specimen (CPMR/2013/S-01) has been deposited at the CPMR Herbarium.

Extraction: The roots of C. membranaceuswere chopped into pieces, air-dried over a period of fourteen days at room temperature and milled into a coarse powder. The pulverised material (2.5 kg) was extracted four times by cold maceration with 24 litres of 70%v/v ethanol. The extract was decanted, filtered with filter paper and concentrated under reduced pressure using a rotary evaporator. It was then freeze dried to give a dark brown gelatinous material (yield; 6.1 w/w %).

Phytochemical Screening: A portion of the freeze dried extract of the C. membranaceus root was screened phytochemically using standard methods as described by 11.

Animals: Adult Sprague Male Dawley rats aged 3 months and weighing 180-200 g were housed under standard conditions of room temperature and fed with standard pelleted feed with tap water ad libitum in the Animal House of the Department of Pharmacology (CPMR). All rats were treated in accordance with the National Institute of Health Guidelines for the care and use of laboratory animals 12. The research protocol was approved by the Ethics Committee of CPMR.

Toxicity Studies: Two groups of six animals each were given a single oral dose of the C. membranaceus extract suspended in distilled water after an over-night fast with an oral gavage needle. The first and second groups received 2500 and 5000 mg/kg body weight of extract respectively. Mortality and general behavior of the animals were observed over a 48 hour period. Surviving animals were observed for a further period of 12 days for toxic symptoms such as pilo-erection and defects in lachrymatory, locomotory and respiratory activities.

Induction of diabetes in rats using Streptozotocin (STZ): The bioassay model employed was according to the description of 13 with some modification.The baseline blood glucose level of the rats was recorded after which they were injected intraperitoneally with a single dose of STZ (60 mg/kg body weight) after an overnight fast. Following the injection, the rats were given free access to feed and water. After a resting period of 48 hours, diabetes was confirmed by determining the fasting blood glucose levels. Rats with blood glucose level above 10.0 mmol/l were selected for the experiment.

Blood glucose level measurement: Blood glucose (BG) levels were initially monitored hourly over a six hour period starting at 0 hour after which the C. membranaceus extract was administered to observe its effects on the BG levels of the diabetic rats.  Blood samples were collected from tail vein using Accu-Chek® Active glucometer (Roche Diagnostics GmbH, Mannheim Germany).  Throughout the study period, the rats received standard diet and water every morning.

Effect of C. membranaceus extract on the Diaphragm: The body weight of the rats before and at the end of the study was determined. At termination of the treatment, the diaphragms of the rats were removed, weighed and each placed in 1.3 mmol/l glucose for ten minutes. The concentration of the glucose was determined using a glucose kit. The amount of glucose absorbed by the diaphragm was calculated.

Assesment of Antioxidant effect of C. membranaceus extract: The method described by 14 was used to determine the antioxidant effect of the extract.Diphenylpicrylhydrazine (DPPH•), which is a stable free radical, reacts with an antioxidant (AH) and is reduced to DPPH-H as indicated below. The degree of discoloration indicates the scavenging potential of the antioxidant compound or extract in terms of hydrogen donating ability.

The evaluation was done by mixing 0.75 ml of the extract with 1.5 ml of a freshly prepared DPPH solution (20 mg/l,); then, each particular mixture was shaken and left to stand for 30 min, at room temperature in darkness. The mixture was tested for the DPPH free radical scavenging activity by reading its absorbance at 517 nm on a Shimadzu UV-1201 spectrophotometer. For evaluation at 250 mg/l, 0.75 ml of the extract (750 mg/l) was mixed with 1.5 ml of the freshly prepared DPPH solution (20 mg/l).

The initial DPPH concentration in the reaction medium is therefore 13.33 mg/l. As blank, a solution prepared by mixing 0.75 ml of methanol with 1.5 ml of the DPPH solution (20 mg/l) was used and read at the same wavelength. In addition, to eliminate the absorbance of the crude extracts at this wavelength, blank samples were prepared with 0.75 ml of each extract and 1.5 ml of methanol. As positive control gallic acid at 0.32, 0.65, 1.30, 2.60 and 5.20 mg/l was used. All measurements were performed in triplicate.

The percentage radical scavenging activity (RSA%) of the extract was calculated by using the following formula:

The simplified form of the above expression in relation to the data obtained for this study is the following:

Statistical analysis: All the data provided in this antihyperglycaemic study represents means ± S.E.M.  The results were analysed by one-way ANOVA followed by Bonferroni’s multiple comparison test to establish significance (p< 0.001) between the treated and the control groups.

Acute Toxicity Studies: The effect of the single oral dose of 5000 mg/kg body weight of the freeze dried extract of C. membranaceus root, administered to six animals showed no deaths within 48 hours. This suggests that the oral LD50 is greater than 5000 mg/kg. Observations of animals over the next 12 days showed no adverse effects of treatment.

There were no physical signs of toxicity as evidenced by normal respiratory, locomotory and lachrymatory activities and the absence of pilo-erection.

By the 28th day, untreated diabetic (diabetic control) rats had 19.0% increase in blood sugar level. CM administered at 100, 300, and 600 mg/kg body weight decreased the blood glucose levels by 61.2%, 48.0% and 61.4% respectively, over the same period (Table 3). The extract at the selected doses and insulin showed significant antihyperglycaemic activities (p< 0.001) as compared to the diabetic control group over the 6-hour and 28-day-treatment period.

The present study has demonstrated the antihyperglycaemic activity of the 70% ethanolic extract of C. membranaceus root in streptozotocin-induced diabetic rats in both short and long term treatment study period.  Alkaloids, terpenoids, polyamides and reducing sugars found in the extract (Table 1) may be responsible for the observed activity. The extract progressively lowered the blood glucose levels in the diabetic rats throughout the study period. 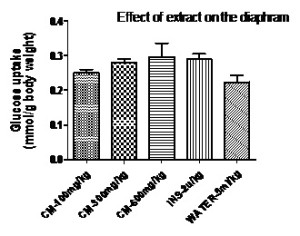 FIGURE 1; ABSORPTION OF GLUCOSE BY THE DIAPHRAGM OF DIABETIC RATS AFTER TREATMENT WITH CM, INS AND WATER.

TABLE 1: RESULTS OF THE PHYTOCHEMICAL SCREENING OF POWDERED C. MEMBRANACEUS

The IC50 value is the sample concentration required to scavenge 50% of the DPPH free radicals. From the results, the IC50 of the extracts of CM was 100.24 mg/l whereas that of gallic acid was 3.4 mg/l (Table 5).  The mass in grams of a mole of DPPH radicals is 394.32; which is equivalent to 6.02 x 1023 DPPH radicals. The initial DPPH concentration in the reaction medium is 13.33 mg/l. This concentration is equivalent to 2.036 x 1019 DPPH radicals per litre. This means 100.24 mg of CM extract or 3.4 mg of gallic acid is capable of scavenging 1.018 x 1019 DPPH radicals (i.e. one half of the initial amount of DPPH per litre). This suggests that the antioxidant action of C. membranaceusis very significant, since the positive control (gallic acid) is a pure compound and the CM extract is a total crude extract from a plant.

TABLE 2: EFFECT OF CM IN STREPTOZOTOCIN-INDUCED DIABETIC RATS OVER 6-HOUR-PERIOD

TABLE 3: EFFECT OF CM IN STREPTOZOTOCIN-INDUCED DIABETIC RATS OVER 28-DAY-PERIOD 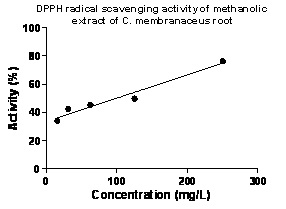 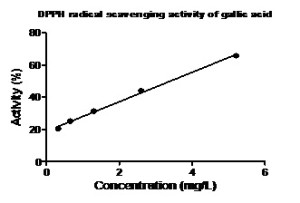 CONCLUSION: This research work has shown that the ethanolic root extract of C. membranaceus has both antihyperglycaemic and antioxidant activities.  C. membranaceus preparations may therefore be useful in the management of Type 1 diabetes and other diseases in which free radicals are implicated.

ACKNOWLEDGEMENT: The authors are thankful to Centre for Plant Medicine Research at Mampong-Akwapim, Ghana, Department of Chemistry and Department of Pharmacognosy and Herbal Medicine, University of Ghana, Legon for providing support for this study.

Department of Pharmacognosy and Herbal Medicine, School of Pharmacy, University of Ghana, Legon.