ABSTRACT: Tectona grandis is famous as a valuable timber hold an extensive range of applications around the sphere. In addition to its enormous uses in the timber industry, all the parts are cherishing with extensive use in traditional medicine and possess significant pharmacological properties. In search of drugs for diabetes, the methanolic seed extract which is prepared by the Soxhlet apparatus, was used for investing the bioactive compounds and anti-hyperglycemic potential in alloxan-induced diabetic rats. The results revealed that preliminary phytochemical analysis revealed the presence of distinct secondary metabolites like xanthones, glycosides, flavonoids, saponins, proteins, amino acids, and carbohydrates. The extract exhibited significant diminution in blood glucose levels in the given alloxan-induced diabetic rat model at 100 mg/kg and 200mg/kg dose using metformin as a reference standard.

INTRODUCTION: Both types I and II diabetes are one of the progressive metabolic disorders. It is also one of the major community health problems over the globe. Diabetes is not a single disease; it is a cumulative disorder with chronic illness. It ravens the other metabolism in the body and develops diabetic complications. Symptomatically it can be identified by hyperglycemia, polyphagia, polyuria and polydipsia. Indian traditional ayurvedic system is having elaborated medicinal use of plants. Current trends in the plant research lead to a handful of literature about the plants bearing antihyperglycemic properties.

The current aim of the work is to identify the potency of Tectona grandis seeds to exhibit antihyperglycemic activity in alloxan-induced diabetic adult wistar rats. Tectona grandis Linn. is a big deciduous tree 30-35 meters tall. It is a well-known tree for its typical strong trunk and durability, having a good commercial value in the timber industry 1. The entire tree possesses valuable applications to heal numerous diseases.

The plentiful literature discloses the uses of different plant parts of Tectona grandis in the management of nociception 2, diabetes 3, dermatological complications 4, hypertension 5, as anti-ulcer 6, antibacterial 7, antiviral 8 anti-inflammatories 9, antifungal 10, antipyretic 11, antioxidant 12, anticancer 13 and hair growth-promoting activities 14. In agroforestry, the teak plants are cultivated along with other crops like maize to get weedicide and antifeedant properties. This helps to improve crop harvesting and yield 15.

Extraction: Five kilograms of the fresh seeds were shade dried at temperature 25-30 ºC for 7 days. The dried seeds were powdered in a grinder. The alcoholic extract of the seeds was prepared by subjecting to repetitive maceration for 2 weeks with methanol after defatting with n-hexane. The extract was evaporated to dryness with rotary evaporator and lyophilized to get powder. The percentage of yield was calculated as 6% and the final methanolic extract was used for the analgesic activity studies.

Phytochemical Screening: By using standard experimental procedures, the methanolic seed extract of Tectona grandis were screened for the presence of various phytochemicals 16.

Experimental Animals: Adult Wistar rats (8-10 weeks) were used for the pharmacological screening from Sainath agencies, Musheerabad, Hyderabad. Animals were randomly segregated into groups prior to the initiation of the experiment; the rats were acclimatized in polypropylene cage for an episode of 10 days under controlled temperature (26 ± 2 ºC), relative humidity (45-55%) and dark/light cycle for a period of 12 hrs. Rodent pellet diet was supplied and water ad libitum. The institutional animal ethics committee (IAEC) has approved (CPCSEA/IAES/JLS/006/ 01/17/005) the study protocol before the commencement of the experiment.

Acute Toxicity Studies: The acute oral toxicity studies were also performed for the extract according to the OECD guidelines (Organization for Economic Cooperation and Development) 423 on albino rats with little modifications. A limit test dose 2000mg/kg for the rats was considered and it is considered that a dose of 1000mg/kg body weight was considered as safe 17.

Antihyperglycemic Activity in Albino Wistar Rats: Alloxan induced diabetic model was used to assess the antihyperglycemic property of the methanolic seed extract of Tectona grandis. Animals were kept for fasting 24 h prior to the induction of diabetes. Alloxan monohydrate solution (5%) was administered as a single dose (125 mg/kg bodyweight, I.P.) in normal saline solution to induce diabetes in rats.

Animals with diabetes were divided into five groups (I, II, III, IV, and V), having five rats in each group. The group-I & II served as Normal and diabetic control respectively. Group-III and group-IV (test groups) received 100 mg/kg and 200 mg/kg of methanolic seed extract of Tectona grandis for a period of 15 days and group-V (standard group) received Metformin (5 mg/kg p.o). The blood samples were collected carefully from the tail vein and blood glucose levels were estimated.

Antihyperglycemic Activity: In the current study, the methanolic seed extract of Tectona grandis was investigated for its antihyperglycemic activity in alloxan-induced diabetic rats. After the induction of diabetes, the rats with diabetes were treated with the extract for 15 days. Results showed that the extract exhibited significant reduction and normalization of blood glucose levels in the diabetic rats when compared to the control Table 1.

The effect is considered significant when compared to the standard drug metformin Fig. 1. The antihyperglycemic activity of the methanolic seed extract of Tectona grandis is in dose-dependent manner Fig. 2. The mechanism of activity may be due to the protective effect of the extract on the islets of Langerhans or regeneration of the alloxan damaged β-cells. Since, the induction of diabetes in group-II is by destructing the β-cells; regular dose of the extract (100 mg/kg and 200 mg/kg per body weight) might have increased the regeneration of the β-cells in group III and IV, which might be the reason for the recovery from the hyperglycemia after 15 days. Presence of various phytochemicals like xanthones, glycosides, flavonoids and saponins may contribute to the protection against diabetes. 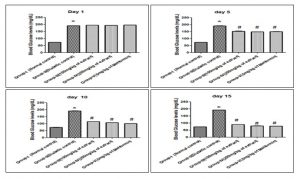 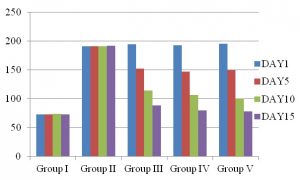 CONCLUSION: To conclude, the methanolic seed extract of Tectona grandis possesses significant antihyperglycemic activity in adult Wistar rats in a dose-dependent manner. This study is perceptible to have the antidiabetic potential of teak seeds and further investigation is necessary to understand the molecular mechanism involved in the anti-hyperglycemic potential of teak seeds.

ACKNOWLEDGEMENT: Authors are thankful to the Department of Botany, Osmania University for providing necessary facilities.