ABSTRACT: Hyperlipidemia is one of the major risk factors for coronary heart diseases. In this study, the antihyperlipidemic activity of methanolic extract of fruits of Trichosanthes anguina Linn. (META) against Triton WR 1339 induced hyperlipidemia in rats was evaluated. META was administered at doses of 125, 250, and 500 mg/kg body weight (b.w.) to Triton induced hyperlipidemic rats. Atorvastatin was used as reference drug. The serum obtained was evaluated for total cholesterol (TC), triglycerides (TG), low-density lipoprotein cholesterol (LDL-C), high-density lipoprotein cholesterol (HDL-C) and fecal fat content (FF). The results obtained showed that the administration of 500 mg/kg b.w. dose of META resulted in a significant decrease in the levels of serum TC (54%), TG (75%) and LDL-C (22%) when compared to the untreated control group. Significant elevation in levels of serum HDL-C (117%) and FF content (131%) was also observed in rats treated with 500 mg/kg b.w. the dose of META. The observed effects may be mediated through reduced absorption and elevated excretion of lipids by synergistic effects of flavonoids, sterols, and saponins present in META. These results indicate that META has significant anti-hyperlipidemic effects on Triton induced hyperlipidemia in rats.

Globally, a third of ischaemic heart disease is attributable to high cholesterol levels. According to World Health Statistics 2011, overall raised cholesterol levels have been estimated to cause 2.6 million deaths (4.5% of total) and 29.7 million disability-adjusted life years (DALYS), or 2.0% of total DALYS 2. Elevated lipid levels result from increased absorption through the gut or enhanced endogenous synthesis. Hence, hyper-lipidemia can be reduced by two possible ways, viz., by blocking endogenous synthesis or by decreasing absorption. Both these factors can be evaluated in normal animals without artificial diets using Triton WR 1339 3.

Currently available hypolipidemic drugs include statins and fibrates. The former corrects the altered blood lipid profile by inhibiting the biosynthesis of cholesterol and the later acts by enhancing the clearance of TG rich lipoproteins 4. However, consumption of these synthetic drugs has been associated with side effects such as hyperuricemia, diarrhea, nausea, myositis, gastric irritation, flushing, dry skin, and abnormal liver function 5. Hence, there is an increased demand for newer herbal drugs with an ability to reduce or regulate serum TC and TG concentrations. As herbal medicines are less damaging than synthetic drugs, they have better patient tolerance even on long term use 6. In our quest to search for plant-derived antihypercholesterolemic and antihyperlipidemic agents, we directed our attention to some Indian medicinal plants.

In the present study, Trichosanthes anguina was selected for studying its antihyperlipidemic activity. T. anguina is commonly known as snake gourd or serpent gourd and is a cucurbit with long, white speckled fruits, widely grown as a vegetable in India. The seeds are used as antihelmintic and antidiarrhoeic and also used for the treatment of biliousness and syphilis 7. T. anguina fruits have been reported to contain active constituents such as saponins 8 and flavanoids 9 that are known to possess antihyperlipidemic activity.

Therefore, our study was an attempt to determine the potential of T. anguina fruit extract in bringing about changes in various parameters of blood lipid profile, viz. TC, TG, LDL-C, very low-density lipoproteins cholesterol (VLDL-C) and high-density lipoproteins cholesterol (HDL-C). Triton-induced hyperlipidemia model in rats was used for assessing the antihyperlipidemic activity of the extract, which is a simple and rapid method for the evaluation of the test substances. This method can be considered as a useful tool for preliminary screening of antihyperlipidemic drugs 10.

Preparation of Extract: Fifty grams of powdered fruit was extracted for 36 h with methanol in a Soxhlet apparatus. The extract was filtered and evaporated at 40 °C to obtain a semi­solid material. The dried methanolic extract of T. anguina (META) was stored at 4-8 °C till further pharmacological studies were carried out.

Experimental Animals: Inbred albino Wistar rats were obtained from Bharat Serums and Vaccines Ltd., Thane. The animals were maintained in polypropylene cages in a well-ventilated room at 25 ± 1 °C with 12:12 h light/dark cycle. Standard pellet feed (Lipton, India) and filtered tap water were provided ad libitum throughout the experimentation period. Animals were acclimated to laboratory conditions for 10 days before initiation of experiments. The use of animals in the study was approved by the Institutional Animal Ethics Committee (IAEC) and all the experiments were carried out according to the guidelines of the Committee for Control and Supervision of Experiments on Animals (CPCSEA), India.

Acute Toxicity Studies: META was studied for its acute oral toxicity according to the guideline No. 423 set by Organization for Economic Cooperation and Development (OECD) 12.  Rats weighing 150- 180 g of either sex were used for the study.

The rats were fasted for 12 h before initiation of the experiment. Following oral administration of a single dose of 2000 mg/kg body weight (b.w.) of META, the rats were observed for mortality for 48 h.

Antihyperlipidemic Activity: Rats weighing 150-180 g were randomly divided into six groups, each consisting of six rats. Group 1 was maintained as normal control. On day 1, all rats in groups 2-6, were injected intraperitoneally with Triton WR-1339 at a dose of 300 mg/kg b.w. to induce hyperlipidemia, while rats in group 1 were injected with saline. On day 2, rats in groups 3, 4 and 5 were orally administered with META dispersed in 0.5% carboxymethylcellulose (CMC) by gastric intubation at doses of 125, 250 and 500 mg/kg b.w. respectively.

Simultaneously, atorvastatin dispersed in 0.5% CMC was administered to the rats in Group 6 at a dose of 30 mg/kg b.w whereas 0.5% CMC alone was administered to the rats in groups 1 and 2. Group 2 served as the hyperlipidemic control group (Triton control). On day 3, blood was collected from the retro-orbital plexus of all animals, and the serum was separated and stored at -20 °C until further use.

Determination of Serum Lipid Levels: The amounts of TC 13, TG 14, and HDL-C 15 in serum were assayed using standard diagnostic kits 16. LDL-C and VLDL-C were calculated by Friedwald formula.

Determination of Fecal Fat Content: On the last day of the experiment, fecal samples were collected, weighed, and dried at room temperature. Dried feces were ground to produce a homogeneous powder and stored at -20 °C until further analysis. Fecal lipids were extracted in chloroform: methanol (2:1) mixture and analyzed according to the method described by Folch et al. 17.

Statistical Analysis: All values are expressed as mean ± SD (n=6). The data were analyzed by one-way analysis of variance (ANOVA) followed by Dunnett’s post-test. P<0.05 was considered significant.

Acute Toxicity Studies: No deaths were observed in the acute toxicity studies at the dose of 2000 mg/kg b.w. and hence, META was considered safe.

Fecal Fat Content: Fecal fat analysis showed a significant elevation in the fat content (131%) in feces of rats treated with META at a dose of 500 mg/kg b.w and compared to the Triton control group Fig. 2. 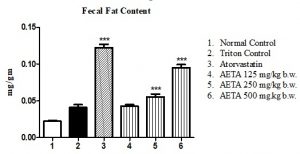 DISCUSSION: Triton WR-1339 has been widely used to block clearance of TG-rich lipoproteins to induce acute hyperlipidemia in several animals 18. Schurr et al., demonstrated that parenteral administration of Triton induced hyperlipidemia in adult rats 19. The large increase in plasma TC and TG due to Triton administration results mostly from an increase of VLDL secretion by the liver accompanied by a noticeable decline in VLDL and LDL catabolism 20.

Triton acts as a surfactant and suppresses the action of lipases to block the uptake of lipoproteins from circulation by extrahepatic tissues, resulting in increased blood lipid concentration 21, 22. While the Triton model of hyperlipidemia in rodents is widely used for a variety of purposes, the rat model particularly has been used for screening natural or synthetic hypolipidemic drugs 23. Among the three dose levels tested in the study, 500 mg/kg b.w. proved to be the most effective for hyperlipidemia. META at a dose of 500 mg/kg significantly lowered both plasma TG and TC levels.

The lowering of TC level by META was associated with a decrease of its LDL-C fraction, which is the target of several hypolipidemic drugs. The cholesterol-lowering activity of META is possibly the result of rapid catabolism of LDL-C through its hepatic receptors for final elimination in the form of bile acids in feces 24.

It is well known that HDL-C levels have a protective role in coronary artery disease 25. HDL-C is reported to have a preventive function against atherogenesis. An inverse relationship has already been established between serum HDL-C levels and cardiovascular risk incidence 26. Contrarily, an increased level of serum LDL-C results in an increased risk for the development of atherosclerosis 27. META increased HDL-C levels, thus exhibiting antihyperlipidemic action. The decrease in TC levels along with its LDL fraction, as is evident from figure 1A and 1D, could be due to an increased cholesterol excretion and decreased cholesterol absorption through the gastrointestinal tract.

Significant elevation in fecal lipid excretion observed in META treated rats as compared with Triton treated rats could be due to the saponins present in META which are known to precipitate cholesterol from micelles and interfere with enterohepatic circulation of bile acids making them unavailable for intestinal absorption of lipids 30. Also, saponins are reported to inhibit pancreatic lipase in the high-fat diet fed animals, leading to greater fat excretion due to reduced intestinal absorption of dietary fats 31.

Flavonoids have also been reported to decrease LDL and increase HDL, and it also helps in the removal of cholesterol from peripheral tissues to the liver for catabolism and excretion 9. Hence, the decrease in levels of TC, TG, and LDL and increase the level of HDL, observed in the present study may be due to the synergistic effects of flavonoids, steroids, and saponins present in the extract.

CONCLUSION: The results of the present study demonstrates that the fruit extracts of T. anguina serve as a potent lipid-lowering agent, which in turn possibly may contribute to its cardio protective and anti-atherosclerotic role.

Further studies are required to elucidate the probable mode of action to substantiate the present findings.