ABSTRACT: In this study, acute Poloxamer (P-407) and chronic cholesterol and cholic suspension (CCS) models were used in rats to evaluate the antihyperlipidemic potential of methanolic extract of Gloriosasuperba(MEGS). Two different doses of 200 mg/kg and 400 mg/kg were used in acute model.Acute model was used to confirm the prophylactic antihyperlipidemic properties of extract, and further most effective dose obtained was used in chronic model. Solution of P-407 was administered into rats after 8 days of treatment with extract via i.p. (intra-peritoneal) route. In chronic model the hyperlipidemia was induced prior to treatment for 28 days with most effective dose obtained from acute model. Blood was withdrawn from retro-orbital plexus and serum lipid profile levels were estimated from both the models. In chronic model, assay of liver enzymes were estimated after scarification of rats. 400mg/kg showed the most prominent effects from acute model. MEGS reduced 51.56% of total cholesterol (TC), and 98.05% reduction of LDL level were observed in chronic model. Reduced atherogenic index was also observed.

In modern time, priorities are given to diagnosis and management of hyperlipidemia which arguably prevent the cardiovascular risks associated with atherosclerosis.1-3

The complexes of fat-protein in blood are known as lipoproteins. The most common lipoproteins are LDL and HDL.  The excess levels of LDL cholesterols may block the arteries which eventually lead to heart attack and death. Therefore LDL cholesterol is designated as bad cholesterol.  On contrary to that HDL cholesterol referred as good cholesterol.  Moreover triglycerides are associated with an increased risk of coronary heart disease. 4

According to WHO, blood cholesterol contributes to approximately 56% cases of cardiovascular diseases worldwide and causes about 4.4 million deaths each year. Of which the highest prevalence being seen in Indian (5.6%) population followed by Chinese (4.7%) & Malaysians (3.6%). The National surveillance survey conducted reported that: Males (5%) have a higher prevalence of high blood cholesterol compared with females (4.3%). According to WHO annual number of deaths due to cardiovascular disease will increase from 17 million in 2008 to 25 million in 2030. The larger number of NCD (non-communicable disease) death is caused due to cardiovascular diseases (48%).5-8

Gloriosasuperba belongs to family of Liliaceae, this drugs is an important plant indigenous to tropical Asia and Africa. The drug is obtained on large scale from Tamilnadu and regions of Kokan (Maharashtra). It belongs to categories of the seven punishes in the Indian medicine, which cure many diseases but may fatal on misuse. It has several therapeutic applications including Anti-inflammatory, Anthelmintic, Abortifacient, Oxytocic, Analgesic, Antimicrobial and Mutagenic activities. One of role mentioned in Materia Medica is Cholegogue which increases the secretion of bileand facilitates excretion of Cholesterol. 6-8 Now the importance of herbal medicines and certain medical practices has recognized all over the world. Today, it is required to use an intelligent and pragmatic approach for evaluation of selective medicinal plant.  Therefore, it should be necessary for the pharmacologist to obtain deeper information of traditional healers, about their remedies and extract their active principles for development into drugs.

Procurement and authentication of plants: Plant tubers of Gloriosasuperba were procured from Adivarivillage, Ratnagiri, Maharashtra. The plant was authenticated by Department of Botany, Gurunanak Khalsa College, Matunga with specified voucher number (pzr#062) for future reference.

The tubers of Gloriosasuperba were rinsed and cleaned with water and kept under shed for drying and powered coarsely. The coarse powder obtained was packed in thimble and subjected to soxhlet extraction by using methanol as an extracting solvent. The extract were further concentrated by using rotary evaporator at the temperature of 40±0.5ºc then concentrated till obtained dry powder and stored at cool temperature in refrigerator.10-11

Different doses of MEGS (200mg/kg and 400mg/kg) and Atorvastatin (10mg/kg) were prepared by suspending in 0.5% sodium carboxymethyl cellulose andsonicated.

30 Adult male Sprague Dawley rats weighing between 150-200gm were purchased from Bombay veterinary college, Parel, Mumbai, Maharashtra 400012. They were divided into 5 groups, each having 6 rats each.

Group IV: Test dose 1 in which each rats were daily administered with Methanolic extract of Gloriosasuperba [MEGS] (200mg/kg) prior single i.p. dose of P-407.18

Group V: Test dose 2 in which each rats were daily administered with Methanolic extract of Gloriosasuperba [MEGS] (400mg/kg) prior single i.p. dose of P-407.18

A homogenous suspension of Atorvastatin and MEGS were prepared individually and freshly by using Sodium methoxycellulose (0.5%) for administration.

Inducing agent: The 15% P-407 was made by dissolving in ice cold saline and stored into refrigerator overnight to facilitate its proper dissolution, prior introduction into animals. Hyperlipidemia was induced by administration of single i.p. injection of Poloxamer-407 (1g/kg).

Treatment: Group IV and Group V were treated with varying doses of MEGS (200mg/kg and 400mg/kg) respectively prior i.p. administration of P-407for 8 days.

After administration of P-407 i.p injection, Blood samples were withdrawn from retro-orbital plexus at 48 hrs, and then were processed for evaluation of serum lipid. Thereafter at 48 hrs animals were sacrificed, livers were excised immediately. 10%w/v liver homogenates were prepared using phosphate buffer (pH-7.4) for estimation of lipid peroxidation and liver catalase levels.

24 Adult female Sprague Dawley rats weighing between 150-200gm were purchased from Haffkine institute, Parel, Mumbai, Maharashtra 400012. They were divided into 4 groups, each having 6 rats each.

Group 3: Standard control group, in which rats were administered daily with Atorvastatin (10 mg/kg) for 28 days after induction of Hyperlipidemia.

Induction of hyperlipidemia: Hyperlipidemia was induced by oral administration of inducing agents for 28 days.

Treatment: Rats were treated with most effective dose of MEGS (400mg/kg) concluded from Poloxamer-407 and Standard Atorvastatin (10mg/kg) for 28 day after induction of Hyperlipidemia.

Blood samples were withdrawn from retro-orbital plexuses at 28th day from the day of induction of Hyperlipidemia, and then were processed further for evaluation of serum lipid parameters. Thereafter at 28th day liver were excised and further estimation of liver parameters were carried out.

The study was conducted after obtaining clearance for the experimental protocol (IAEC/PR/2012/02) from institutional Animals ethics committee (IAEC), Bharati Vidyapeeth’s college of Pharmacy, C.B.D. Belapur. The procured rats were housed in Bharati Vidyapeeth’s college of Pharmacy, CBD Belapur. These experiments were carried out as per guidelines specified by Committee for Purpose of Control and Supervision on Experiments on Animals (CPCSEA). Animals were fed with commercials pellets diet (Amruth Laboratory, Mumbai, India) and tap water ad-libitium.

All the blood serum under this serum was analyzed for marker parameters such as serum total cholesterol, serum triglycerides, and High density lipoproteins. All the parameters were analyzed by auto analyzer (Erba-7) with biochemical kit (Erba diagnostics Mannheim GmbH). Moreover VLDL and LDL were calculated by using Friedewald’s formula.

The atherogenic indices calculated were.

Approximate 1 gm of liver was excised from each rats, and used further for liver enzyme assays.It was homogenized in 10ml Phosphate buffer (pH-7.4) to form 10%w/v liver tissue homogenates. Thereafter prepared liver tissue homogenates were centrifuged at 3500rpm for 15 minutes and thus obtained clear supernatant was used for determination of liver peroxidation levels and catalase levels.

All the results are expressed as Mean ± S.E.M (n=6), Values in parentheses indicates % inhibition of total cholesterol. Statistical analysis was performed by one way ANOVA followed by Dunnetts test, where p<0.05, when compared with diseases control group.

All values are expressed as Mean ± S.E.M (n=6), Values in parentheses indicates % inhibition. Statistical analysis was performed by one way ANOVA followed by Dunnetts test, where **p<0.01,***p<0.001when compared with disease control group. 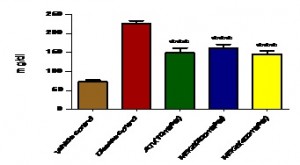 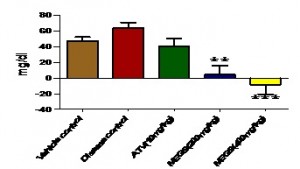 All values are expressed as Mean ± S.E.M (n=6), Values in parentheses indicates % inhibition Statistical analysis was performed by one way ANOVA followed by Dunnetts test, where ***p<0.001, when compared with disease control group. 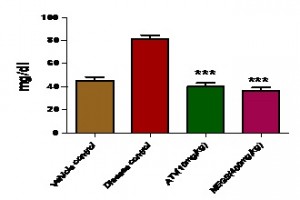 TABLE 3: EFFECTS OF MEGS ON LIVER PEROXIDATION AND CATALASE LEVELS IN LIVER OF HYPELIPIDEMIC RATS.

DISCUSSION: Hyperlipidemia is characterized by elevated serum levels of total cholesterol (TC), lowdensity lipoprotein (LDL), very low density lipoprotein (VLDL) and decreased serum level of high density lipoprotein (HDL). Several studies revealed that it is predictive risk factors for atherosclerosis, coronary artery diseases, cerebral vascular disease and peripheral vascular diseases. A high total cholesterol level can increase your risk of cardiovascular disease. However, decisions about when to treat high cholesterol are usually based upon the level of LDL, rather than the level of total cholesterol. Hence in the present study antihyperlipidemic potential of selected plant extracts, MEGS were designed on these grounds whereby the effect of MEGS and EEGG on serum lipid profile (TC and LDL), liver enzyme parameters (lipid peroxidation, Catalase) and Atherogenic indices (AI, CRR, AC) were evaluated. Effects of MEGS on these pharmacological parameters were studied in two different experimental models of hyperlipidemia namely Poloxamer-407 induced hyperlipidemia and, Cholesterol and cholic suspension induced hyperlipidemia.

Clinical trials have shown LDL (bad cholesterol) is mainly responsible for consequences created by the hyperlipidemia. Low-density lipoprotein (LDL) particles are transported into the vessel wall. Endothelial cells and monocytes/macrophages generate free radicals that oxidize LDL (oxLDL), resulting in lipid peroxidation. Oxidized LDL can directly can directly injure endothelial cell and causes endothelial dysfunction. These LDL engulfed macrophages becomes foam cells and accumulate in the intima of an artery and causes proliferation of smooth muscle cells which along with more foam cells from the fibrous cap of atheroma. Most of cholesterol contained in LDL. Thus robust relationship between serum TC and CHD found in epidemiological studies strongly implies that an elevated LDL level is a powerful risks factor. Subsequent studies have shown that LDL is the most abundant and clearly evident atherogenic lipoprotein. 23

Therefore MDA is the most frequently used as an indicator of lipid per oxidation. Catalase is major enzyme dealing with reactive oxygen species in the most cell of the body and plays an important role in the elimination of ROS derived from redox reactions in the liver. Studies indicate that Hyperlipidemia diminishes the antioxidant defense system and decrease the activity of catalase, thereby elevating the lipid peroxide content. Further, catalase is easily inactivated in the liver by lipid peroxides or ROS, thus accounting for lower catalase activities in livers of Hyperlipidemia rats. 24-26

Study conducted previously has been indicated that, in rats the increase in plasma cholesterol following Poloxamer-407 i.p. administration may be due to inhibition of cholesterol 7a- hydroxylase which facilitate the clearance of cholesterol and up regulation of 3-hydroxy-3-methylglutaryl coenzyme A (HMG CoA) reductase. It also causes the inhibition of lipoprotein lipase which hydrolyses triglycerides into glycerol and free fatty acids. Inhibition of this enzyme reduces the rate at which triglycerides are hydrolyzed to free fatty acids, producing elevation in serum triglycerides level. Therefore this model had chosen for present investigation of hyperlipidemic activity. 27

Exogenously administered cholic acid accumulates beyond the physiological level that initiates the negative feedback mechanism and leads to suppression of bile acids synthesis. Functionally inhibited Bile acid affects the solubilization of biliary cholesterol and digestion of lipid. Moreover additional inclusion of cholesterol and coconut oil results in accumulation of intracellular cholesterol and its ester in body tissues as coconut oil contain approximately 92% of saturated fats. By this mechanism it increased TC & TG. Therefore in present study, cholesterol and cholic acid suspension was formulated in coconut oil for the purpose of dosing.28-29 Atherogenic indices are powerful indicators of the risk of development of heart disease: higher the value, higher the risk of development of cardiovascular disease and vice versa. Treatment with MEGS lowered atherogenic indices significantly (p<0.01) thus decreasing the risk of development of cardiovascular disease.30-31

Our results suggest that the MESG has effective Antihyperlipidemic properties with antioxidant properties. Details studies are needed to postulate the possible mechanism(s) of action.