The study was undertaken to investigate the hypolipidemic and hepatoprotective effects of the different fractions (Petroleum ether, ethyl acetate and chloroform) of ethanolic extract of Brassica oleracea. The different fractions of extract were administered intraperitoneally as a single dose of 150 mg/kg body weight to alloxan induced diabetic rats and found to reduce blood lipid level (Total cholesterol and Triglycerides) significantly (p<0.05). The plant fractions also exhibited correction of altered biochemical parameters viz., SGOT and SGPT levels in diabetic rats. The effect of plant fractions were compared with standard drug metformin. The phytochemical screening tests indicated that the different constituents such as saponins, tannins, triterpenes, alkaloids and flavonoids etc. were present in the plant which has hypolipidemic and hepatoprotective properties. Thus, this study indicates that various fractions (Petroleum ether, ethyl acetate and chloroform) of the ethanolic extract of Brassica oleracea have favorable effect in hypolipidemic and hepatoprotective activities.

INTRODUCTION: Hyperlipidemia mainly an increased level of total cholesterol, triglycerides and low-density lipoprotein cholesterol along with a decrease in high-density lipoprotein cholesterol, is the predictor of coronary artery disease, fatty liver disease, and carcinogenesis, which is associated with the formation of reactive oxygen species 1. Hyperlipidemia is a predominant risk factor for cardiovascular diseases 2. Hyperlipidemia is an important risk factor in the initiation and progression of atherosclerotic impasse 3.

Hypercholesterolemia and hypertriglyceridemia are common complications of diabetes mellitus in addition to hyperglycemia. The frequency of hyperlipidemia in diabetes is indeed very high depending on the type of diabetes and its degree of control. Diabetes mellitus is one of the oldest diseases affecting millions of people all over the world 4. Diabetes is a metabolic disorder featured by hyperglycemia as well as hyperlipidemia. The alterations in carbohydrate, fat and protein metabolism associated with absolute or relative deficiency of insulin secretion and insulin action 5. Although numerous oral hypoglycemic and hypolipidemic drugs exist alongside insulin, still there is no promising therapy to cure diabetes 6.

Over the last few decades the reputation of herbal remedies has increased globally due to its therapeutic efficacy and safety. In recent years, numerous traditional medicinal plants were tested for their antidiabetic, hypolipidemic and hepatoprotective potential in the experimental animals 7.

Hyperlipidemia is the current medical as well social problem, specially associated with diabetes mellitus leading to increasing morbidity and mortality. The major risk factors of hyperlipidemia are associated with atherosclerosis which predisposes ischemic heart disease and cerebrovascular disease. The study of the effect of Brassica oleracea on lipid profile in hyperlipidemic individuals showed that it significantly reduces the lipid level (cholesterol and triglyceride) 8.

There was a significant rise in SGOT and SGPT levels in diabetic rats, which could relate to excessive accumulation of amino acids (glutamate and alanine) in the serum of diabetic animals as a result of amino acids mobilization from protein stores 9. Medicinal plants and herbs are of great importance to the health of the individuals and communities. A scientific investigation of traditional herbal remedies for diabetes may provide valuable lead for the development of alternative drug and therapeutic strategies. The study of the effect of Brassica oleracea demonstrated that it significantly reduces the SGOT and SGPT levels in diabetic rats 10, 11.

Brassica oleracea (local name cabbage) is a species of Brassica native to Coastal Southern and Western Europe, where its tolerance of salt and lime but intolerance of competition from other plants typically restricts its natural occurrence to limestone sea cliffs. It has similar composition as other Brassica vegetables 12.

Plant Materials: Fresh leaves of Brassica oleracea (local name- cabbage) were collected from medicinal plant garden, Department of Pharmacy, University of Rajshahi, Bangladesh and various parts of the locality. After thorough washing the leaves were dried completely under mild sun and ground in electric grinder into a coarse powder. The plants were authenticated by Mr. A.H.M. Mahbubur Rahman, Department of Botany, University of Rajshahi, Bangladesh.

Preparation and fractionation of crude extracts: The crude extract was obtained through cold extraction process. The coarse powder was submerged in ethanol and allowed to stand for 10 days with occasional shaking and stirring. When the solvent became concentrated the alcohol content was filtered through cotton and then through filter paper (Whatman filter paper no. 1). Then the solvent was allowed to evaporate using rotary evaporator at temperature 40-45oC. Thus, the highly concentrated crude extract was obtained. That was then fractionated using petroleum ether, ethyl acetate and CHCl3. The solvents of these fractions were evaporated by rotary evaporator and then dried under mild sun. The dried fractions of extract were then preserved in the freeze for the experimental uses 13.

Test for saponins: 300 mg of extract in 5 ml water was boiled for two minutes. Mixture was cooled, mixed vigorously and left for three minutes. The formation of frothing indicated the presence of saponins.

Test for tannins: To an aliquot of the extract added sodium chloride to make to 2% strength. This was filtered and mixed with 1% gelatin solution. Precipitation indicated the presence of tannins.

Test for triterpenes: 300 mg extract mixed with 5 ml chloroform and warmed for 30 minutes. To the chloroform solution small volume of concentrated sulfuric acid was added and mixed properly. The appearance of red color indicated the presence of triterpenes.

Test for alkaloids: 300 mg extract was digested with 2 molar HCl. The acidic filtrate was mixed with amyl alcohol at room temperature and the alcoholic layer was examined. Pink color indicated the presence of alkaloids.

Preparation of dosage of active drug and plant extract:

Metformin: Metformin was in microcrystalline form and freely soluble in water. The dosage was prepared in solution form using sterilized water in such a concentration that, each 0.1 ml of solution contained metformin according to the dose of 150 mg/kg body weight since metformin is effective in such dose.

Selection of animals: A total number of 30 long-Evans male rats weighing about 150-180 gm, age 2 months were purchased from animal house of International Centre for Diarrhoeal Disease Research, Bangladesh (ICDDR, B). Prior to commencement of the experiment all the rats were acclimatized to the new environmental condition for a period of one week. During the experimental period the rats were kept in a well ventilated animal house at room temperature of 25 oC and were supplied with standard pellets supplied from ICDDR, B and fresh drinking water. All the rats were kept in cages with wide square mesh at bottom to avoid coprophagy and maintained with natural 12 hour light and dark cycle 17.

Experimental induction of diabetes and collection of serum: Group 1 animals were used for normal control receives only vehicle (DMSO). Groups 2-6 animals were allowed to fast for 12 hrs and were induced diabetic by injection intraperitoneally a freshly prepared solution of alloxan (110 mg/kg body wt.) in normal saline after base line glucose estimation was done. The alloxan treated animals were allowed to feed over night to overcome drug induced hypoglycemia. After 48 hours blood glucose content was measured by using Bioland G- 423 test meter (Bioland, Germany) using blood sample from the tail vein of the rats.

When the condition of diabetes was established (blood glucose levels above 11.1 m mol/L) the drug (metformin) and fractions of plant extract were administered to the respective groups of animals selected for the study. After completing the 24 hours blood glucose level testing the rats were sacrificed and 7 ml of blood was collected directly from heart of each rat by syringes, centrifuged at 4000 rpm for 10 minutes and the serum was obtained. The serum was then used for the experimental analysis 18.

Statistical analysis: The results were expressed as mean±SEM using Graph Pad Prism (version 4.0) computer program (Graph pad Software San Diego, CA, USA). We used a one-way analysis of variance (ANOVA), followed by Scheffe’s post-hoc test or students paired or unpaired t-test where appropriate. The statistical method applied in each analysis was described in each figure. Results were considered to be significant when p values were less than 0.05 (p<0.05).

RESULTS: The effect of the different fractions of ethanolic extract of Brassica oleracea on the serum total cholesterol (TC), serum triglyceride (TG), SGOT and SGPT levels were investigated in the alloxan-induced diabetic rats using metformin as a standard agent. 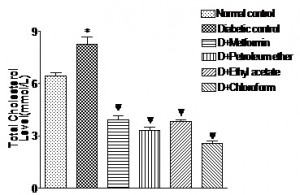 FIG. 1 EFFECT OF DIFFERENT FRACTIONS OF B.OLERACEA ON THE TOTAL CHOLESTEROL LEVEL IN DIABETIC RATS 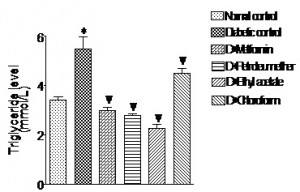 FIG. 2 EFFECT OF DIFFERENT FRACTIONS OF B. OLERACEA ON THE TRIGLYCERIDE LEVEL IN DIABETIC RATS

Phytochemical Screening: The phytochemical screening tests indicated the different constituents such as saponins, tannins, triterpenes, alkaloids and flavonoids were present in the plant Brassica oleracea which have the antidiabetic and glycogenesis properties. The results are summarized in Table 2.

DISCUSSION: Hyperlipidemia is one of the greatest risk factors contributing to prevalence and severity of cardiovascular diseases. The epidemiologic data shows that the prevalence of dyslipidemia in Chinese adults aged 18 and above is 18.6%, which is to say the number of dyslipidemic patients has reached 160 million 22. It is also reported that almost 12 million people die of cardiovascular diseases and cerebral apoplexy each year all over the world. Therefore, it is very important to pay attention to early stage prevention and control of hyperlipidemia in a comprehensive way.

However, the risk of hyperlipidemia would be reduced by consumption of flavonoids and their glycosides, supported by abundant studies 23, 24, 25, 26.

The hypolipidemic   activity   of Brassica oleracea may be attributed due to the presence of flavonoids, ascorbic acid etc. 28. Flavonoids are known for their diverse biological activities including hypolipidemic activity resulting from their antioxidant activity 29. Brassica oleracea plant fractions demonstrated the presence of flavonoids and other different constituents such as saponins, tannins, triterpenes and alkaloids (Table 2). With respect to the lipid lowering capacity of these plant fractions, it could be suggested that the constituents of these plant fractions may acted as inhibitors for enzymes such as hydroxyl-methyl-glutaryl-CoA reductase, which participates in de novo cholesterol biosynthesis as has been suggested for some plants earlier 30, 31.

The increase in the activities of SGOT and SGPT is found in diabetic rats 32. The higher levels of SGOT and SGPT may give rise to a high concentration of glucose. In other words, the gluconeogenic action of SGOT and SGPT plays the role of providing new supplies of glucose from other sources such as amino acids. Following intraperitoneal administration of different plant fractions significantly reduced the SGOT and SGPT levels (Table 1). The obtained results suggest that Brassica oleracea possesses hepatoprotective capacity due to flavonoids and sulfurated compounds11 and other components such as saponins, tannins, triterpenes and alkaloids etc. (Table 2).

CONCLUSION: In conclusion, the administration of plant fractions produced significant reduction of blood lipid level as well as SGOT and SGPT level. It causes rapid induction of hypolipidemia as well as hepatoprotective effect in diabetic rats. Thus, in the light of our pharmacological studies the study of various fractions of Brassica oleracea extract might offer a natural key in hypolipidemic and hepatoprotective activity. Further chemical and pharmacological investigations are in progress to elucidate in detail the active principles and the exact mechanism of actions.

ACKNOWLEDGEMENT: The authors would like to thank the Department of Pharmacy, University of Rajshahi for providing laboratory facilities and International Centre for Diarrhoeal Disease Research, Bangladesh (ICDDR, B) for supplying rats for the research work.