ANTIMICROBIAL ACTIVITIES OF PHARMACOLOGICAL AND ANTIOXIDANT COMPOUNDS OF SOME EDIBLE MUSHROOMS AGAINST BRUCELLA SPP.

ANTIMICROBIAL ACTIVITIES OF PHARMACOLOGICAL AND ANTIOXIDANT COMPOUNDS OF SOME EDIBLE MUSHROOMS AGAINST BRUCELLA SPP.

ABSTRACT: Although there are numerous studies on antimicrobial activities of mushrooms against many common pathogenic microorganisms, there is hardly any study against Brucella spp., responsible for brucellosis in animals and human beings throughout the globe. The present study was aimed to evaluate the in vitro antimicrobial activities of ethanol extracts of five edible mushrooms namely, Pleurotus ostreatus, Pleurotus florida, Pleurotus eous, Pleurotus sajor-caju and Calocybe indica against four reference strains of Brucella spp.: B. abortus S19, B. abortus S99, B. melitensis M16 and B. suis 1330. Methodologies adopted were disc diffusion assay, minimum inhibitory concentration (MIC) and minimum bactericidal concentration (MBC) of the extracts. Evaluation of the antioxidant capacity of the extracts of the mushrooms by DPPH free radical scavenging activity was also aimed in this study. The total phenol content of the mushrooms showed significant positive Pearson correlation with the antioxidant capacity of the extracts. The results obtained revealed the antimicrobial potency of all the screened mushrooms against Brucella spp. P. sajor-caju had highest phenolic content, which may be responsible for its highest antioxidant capacity resulting outstanding antimicrobial activities. This study signifies the possible use of these edible mushrooms as source of effective antimicrobial agents against brucellosis.

INTRODUCTION: Although medical fraternities could consider new generation antibiotics, as life saving end products, against complicated bacterial infections; but most pharmaceutical industries has discontinued research activities for development of newer antibiotics, due to fewer profit margins.

This is due to unexpectedly rapid development of microbial resistance, against newly developed antibiotics in recent past, imposing a threat not only to all the clinicians around the globe, but also to mankind as a whole. In 2015 and 2016 many microorganisms are being reported as having MCR-1 gene, which causes resistance to the most effective antibiotic colistin, which is commonly used in terminal patients with infections 1. This global extend of drug resistance also accomplished the intracellular pathogens like Brucella, with limited number of known antimicrobials effective against them, indicating an added threat in near future, as few workers are engaged in studies with these microorganisms, due to high risk of laboratory acquired infections, and requirement of higher biological safety level precautions 2, 3. It was evident from the literature survey that strains of B. abortus were found to be resistant to eight antimicrobial agents, which are commonly used to treat patients with human brucellosis.

A study showed strains of B. abortus to be highly resistant to azithromycin (100%), sulphamethoxazole- trimethoprim (98.9 %), moxifloxacin (80.7 %) and ciprofloxacin (69.3 %). The same study showed comparatively low resistance against rifampicin (6.8 %), Streptomycin (5.7 %), tetracycline (1.1 %) and doxycycline (1.1%) 4. Again, classical drug combination treatments against brucellosis, along with their side effects, such as high gastric discomfort, high relapse rates and therapeutic failures, entail necessity of newer antimicrobials to mitigate these highly virulent agents 5. Therefore, as an alternative and complementary approach, many medicinal plants and other herbal resources are getting explored everywhere, to discover a novel antibiotic with a new mode of action. In this regard, mushrooms can definitely be considered as a potential source of new antimicrobial compounds, and it has been noticed that there is a recent rise in interest among scientists regarding mushrooms, not only as a healthy food, but also for its bioactive compounds, which are getting used as complementary medicine or dietary supplements for anticancer, antiviral, immune stimulating, hypocholesterolemic and hepatoprotective activities 6. For example, mushrooms such as Ganoderma lucidum, Lentinula edodes, Lepista nuda and many others, are classified as medicinal mushrooms, and recent studies on various other mushrooms have also reported that different types of their extracts showed broad spectrum antibacterial activities against common pathogenic bacteria 7, 8.

The mushrooms are also well known to gear up the immune system, as they consist of immune modulatory polysaccharides-protein complexes, and thus may have an added benefit to prevent relapses 9. Brucellosis is a zoonotic disease, and it mainly occurs accidentally in humans, who live in the close proximity of the infected animals, or after consuming infected animal products, such as unpasteurized milk and milk products.  In case of human brucellosis, infections due to B. melitensis are higher, followed by B. abortus and B. suis. Rare cases have been observed with infection due to B. canis 10, 11. The present work was done with a motive to screen for the first time, the in vitro sensitivity of Brucella spp., to edible mushrooms extracts of P. ostreatus, P. florida, P. sajor-caju, P. eous (oyster mushrooms) and  C. indica (milky mushroom).

Extract preparation: Fresh mushroom samples were shade dried, and then powdered, which was later extracted with 60 per cent (v/v) ethanol for about 72 hours in dark, at room temperature. The extracts were then filtered with Whatman filter paper. Then all the extracts were sterilized with 0.22 micron syringe membrane filter, after which it was lyophilized, and the crude bioactive content was measured and was freeze dried 12.

Antibacterial screening assays: The antimicrobial activity was screened through agar disc diffusion method, and minimum inhibitory concentration assay (MIC), by serial dilution method, using 96 well plate, and plate reader (Erba Lisa Scan II Tranasia Mannheim, Germany). The minimum bactericidal concentration (MBC) was performed following determination of the MIC concentration. After completion of MIC, an aliquot from each well of the serial dilutions was inoculated on enriched Brucella selective agar base. The plates were examined, and CFU/mL was counted after incubation in 5 per cent carbon dioxide environment. The plate showing 99.9 per cent inhibition, in comparison to the initial count of the original inoculums, was considered to be as MBC. For all the assays 0.5 McFarland opacity culture was used 13, 14, 15.   All the assays were carried out in triplicate.

Determination of DPPH free radical scavenging activity: Antioxidant activity of a sample can be measured principally by electron transfer reaction mechanism. Here reduction of an oxidant, which shows change in color when reduced, is the principle mechanism of the reaction. 2, 2-Diphenyl-1-picrylhydracyl (DPPH) free radical scavenging activity was measured following the modified method of Xu and Chang 17. To 3.8mL of DPPH methanol solution (0.1mM) added 0.2mL of extract solution, and mixed by shaking it vigorously. It was allowed to stand in dark, for 30 minutes, and then the absorbance was measured at 520nm. The DPPH solution mixed with extraction solvent is kept as blank for the experiment. The per cent of DPPH discolourartion is calculated by the formula:

Here Acontrol is the absorbance of the blank sample.

Statistical Analysis: The statistical analysis of the data was done using statistical software GRAPH Pad Prism Version 5. Results were expressed as mean of at least three separate determinants. The results were analyzed using one – way ANOVA. Significant differences were accepted at P ≤ 0.05. Pearson correlation coefficient was used to determine correlation between total phenol or flavonoid content and antioxidant activity. Differences between means at P value < 0.005 level were considered significant.

RESULTS AND DISCUSSION: The results are given in the Tables 1-2 and in Fig. 1-12. 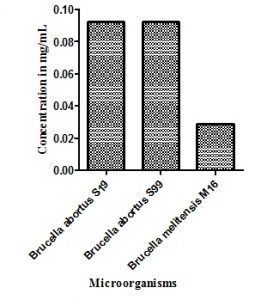 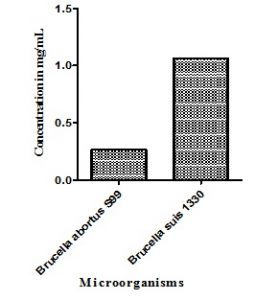 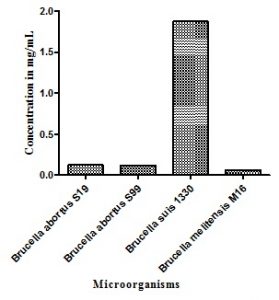 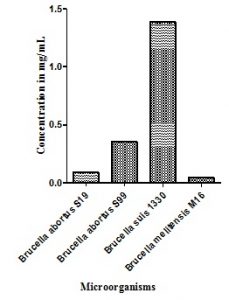 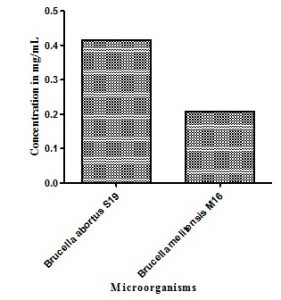 FIG 1-5: THE BAR DIAGRAM REPRESENTS THE MEAN OF THE MINIMUM INHIBITORY CONCENTRATION (IN mg/ml) OF THE ETHANOL EXTRACTS OF MUSHROOMS AGAINST BRUCELLA SPP.

Antimicrobial assay: As evident from the data (shown in Table 1), the crude ethanolic extracts of all the five edible mushrooms have inhibitory effect, upon the growth of Brucella spp. In case of P.ostreatus, the antimicrobial activity was found to be satisfactory against B. abortus S19, B.abortus S99 and against B.melitensis M16 (Fig. 1 and Fig. 6); but it showed no activity against B. suis 1330. The other mushroom extracts P. eous, P. sajorcaju and P. florida showed potent inhibitory action upon all the strains of Brucella spp.(Fig.2-4 and Fig. 7-9), however, P. florida did not show any action against B. melitensis M16. The extract of C. indica showed inhibitory action upon B.abortus S19 and B. suis 1330(Fig. 10 and Fig 5). Previous studies revealed that the in - vitro inhibitory action of the widely used oyster mushroom P. ostreatus, and P. sajor-caju showed inhibitory action upon Enterobacter aerogenes, Salmonella enterica serotype Typhimurium, Escherichia coli, Proteus vulgaris. P. sajor caju also showed potent inhibition against Klebsiella pneumoniae 18.

Furthermore, the study on the antimicrobial action of extracts of P. djamor and C. indica has been found not only against Pseudomonas aeruginosa, Proteus vulgaris but also against Candida albicans 19. However, no previous study has explored the antimicrobial potency of the common edible mushrooms against Brucella spp. 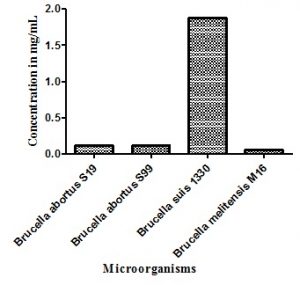 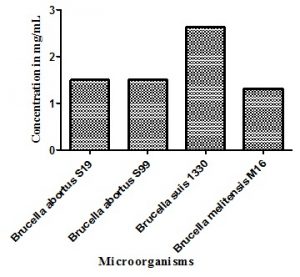 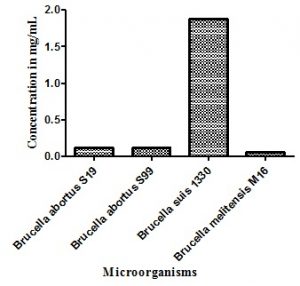 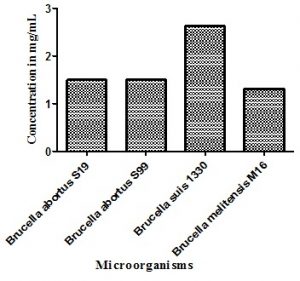 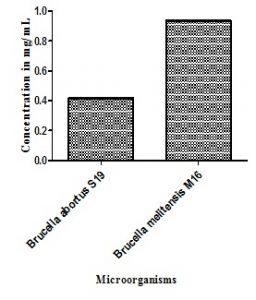 FIG 6-10: THE BAR DIAGRAM REPRESENTS THE MEAN OF THE MINIMUM BACTERICIDAL CONCENTRATION (IN mg/ml) OF THE ETHANOL EXTRACTS OF FIVE EDIBLE MUSHROOMS AGAINST BRUCELLA SPP.

Evaluation of bioactive components: As mentioned in our previous study the ethanol extracts of mushrooms contains several bioactive components such as phenol, terpenoid, steroid, flavonoid and saponins 16. The presence of phenol and flavonoid content in the extracts may contribute to the potent antimicrobial action of the mushrooms against Brucella spp.

Antioxidant assay: The extract of P. sajor-caju showed highest antioxidant activity and least activity was shown by the extract of C. indica based on the IC50 value (Fig. 11). In our study there is positive correlation (P value < 0.005) between the total phenol content and antioxidant capacity of the extracts of mushrooms (Fig.12) and this observation was previously reported by other authors in their study. However, there is no correlation between the total phenol content and total flavonoid content which is again in accordance with the result obtained from the same study. The phenol or flavonoid content varies species to species of mushroom 20.

As there is no single solvent which could extract all the major antioxidant compounds from mushrooms so extraction with 60 per cent ethanol -aqueous solvent was done to get a better yield as previous study had already reported significant increase in yield with mixture of organic solvent with water 12. The total phenol and flavonoid content extracted using 60 percent ethanol for about 72 hours showed increased yield than that of previously reported by others in their study using absolute ethanol for about 24 hours 21.

This is a novel study regarding the antimicrobial action of mushrooms against Brucella spp. as no literature is available till date. 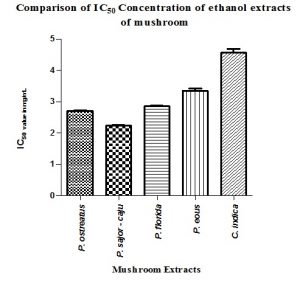 FIG. 11: THE BAR DIAGRAM REPRESENTS THE MEAN ± SD OF ACTIVITY (IC50 in mg/mL) CONCENTRATION OF MUSHROOM EXTRACTS. THE RESULTS WERE FOUND SIGNIFICANT [P VALUE < 0.05 BY ONE – WAY ANOVA] 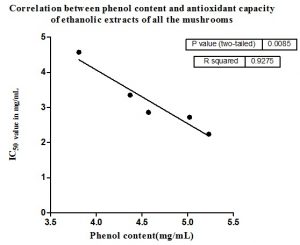 CONCLUSION: The study reveals a possible use of these mushrooms as newer antimicrobial agents in future, as the conventional treatments of brucellosis, which are currently available show a gloomy picture, marred with failures of treatment, and upsurge of recurrence of the disease. The bioactive components extracted during the extraction procedure, showed excellent antimicrobial activity particularly against strains of Brucella abortus, along with prominent antioxidant activity. As hardly any study is available regarding the antimicrobial activity of these edible mushrooms against microorganisms of the family Brucellaceae, and as the disease brucellosis is a chronic one, with high chances of relapses; so study on this field is of paramount importance, from microbiological and pharmaceutical point of view in near future.

ACKNOWLEDGEMENT: The authors acknowledge the authorities of the mushroom cultivation farm of Ramakrishna Mission, Narendrapur, West Bengal, India, for providing the samples for research purposes. The authors would also like to acknowledge DST INSPIRE division, Government of India, for providing the financial assistance to Debasmita Chatterjee throughout the work and to DBT Brucella sero-epidemiology network project, BE-8, Dept. of Science & Technology, Govt. of India for providing some technical facilities in this experiment.