U. Arul Pamila* and S. Karpagam

ABSTRACT: The present investigation evaluates preliminary phytochemical screening and antimicrobial activity of aerial parts of Alternanthera bettzickiana (Regel) G. nicholson an edible green medicinal herb tested against various Gram positive, Gram negative bacteria and fungi. The plants were evaluated against two Gram positive bacterial species such as Staphylococcus aureus and Enterococcus faecalis; two Gram negative bacterial species such as Escherichia coli and Klebsiella pneumoniae; and fungi such as Aspergillus niger, Epidermophyton floccosum and Candida albicans were tested. Preliminary phytochemical screening was performed with ethanol, petroleum ether, acetone, chloroform and aqueous extracts of Alternanthera bettzickiana (Regel) G. nicholson that showed the alkaloids, carbohydrates, saponins, phenols, flavonoids, diterpenes, tannin, terpenoids, steroid, oxalate, anthocyanin, leucoanthocyanin, Xanthoprotein, coumarin and glycosides in the ethanol extract. The ethanol extract showed higher phytoconstituents when compared to the other extracts. The extracts were compared with standards like Amoxicillin and Ketoconazole for antibacterial and antifungal activity respectively. The extracts showed greatest antimicrobial activity as measured from the zone of inhibition and results were comparable with that of standard drugs against the organism tested. In conclusion, plant extract of A. bettzickiana showed remarkable antimicrobial activity due to the phytochemicals present in them.

There are many approaches to the search for new biologically active principles in higher plants 3. The use of crude extracts of plants parts and phytochemicals of known antimicrobial properties can be of great significance in the therapeutic treatments. In recent years, a number of studies have been conducted in various countries to prove such efficiency. The screening of plant extracts has been of great interest to scientists in the search for new drugs for greater effective treatment of several diseases 4. In addition, many biological activities and antibacterial effects have been reported for plant tannins and flavonoids 5-7. Plants used for traditional medicine contain a wide range of substances that can be used to treat chronic as well as communicable diseases 8. Medicinal plants contain large varieties of chemical substances which possess important therapeutic properties that can be utilized in the treatment of human diseases. Modern technique and pharmacological screening procedure results in new plant drugs usually finding their way into modern medicine.

The most important of these phytoconstituents of plants are alkaloids, flavonoids, tannins and phenolic compounds. In recent years, there has been resurgence of interest in the discovery of new compounds from plants with the aim of finding novel treatment against a variety of illness. Perhaps 90% of the world’s population still relies completely on raw herbs and unrefined extracts as medicine 9. Scientific investigations of medicinal plants have been initiated in many countries because of their contributions to health care. The primary benefits of using plant-derived medicines are relatively safer than synthetic alternatives, offering profound therapeutic benefits and more affordable treatment 10. The phytotherapeutic can provide many modern drug developments that provide many invaluable drugs from traditional medicinal plants.

Alternanthera bettzickiana (Regel) G. nicholson (Amaranthaceae), native to South America, commonly known in English as Baptist plant, border plant, red calico plant, is an erect and bushy or prostrate perennial herb with food and ornamental values. The leaves are green or reddish and sometimes variegated in red and green. The shoots and tender leaves are commonly consumed like vegetable or spinach and in soups, either cooked alone or mixed with other vegetables such as cowpeas or amaranth, with added coconut milk and served with a staple food like rice or ugali 11.

The whole plant is reported to be useful in purifying and nourishing blood and is claimed to be a soft laxative, a galactagogue and an antipyretic, in addition to its wound healing property 12. It is commonly used as an ornamental edging plant. It is popular in China where it is cultivated in nearly all the large cities. This genus consists of approximately 80 species and is widespread genus with cosmopolitan distribution 13.

Collection and Authentication of Plant Materials: The plants were collected from Pechiparai of Kanyakumari District, Tamil Nadu.  The collected plants were identified in the Department of Botany, Queen Mary's College and confirmed by Prof. P. Jayaraman, Director, Plant Anatomy Research Centre (PARC) Chennai.

Processing of Medicinal Plants: Fresh plants were washed thoroughly three to four times with running tap water then finally with sterile water followed by shade drying at room temperature for 20-30 days and powdered by using an electric blender and stored in airtight container.

Preparation of Extract: Each sample of 10 g was taken and soaked for 24 hr in 30 ml of ethanol, petroleum ether, acetone, chloroform and aqueous separately. The extracts were filtered using Whatman filter paper No. 1, evaporated to dryness and re-dissolved in DMSO ((Dimethyl Sulphoxide). The extracts were preserved in airtight container and kept at 4-5 °C for further use.

Phytochemical Screening: The plants have primary and secondary metabolites which can be used for medicinal and other uses. There is a need to analyze the plants for such phytochemical screening. Phytochemical screening was carried out by using the standard protocols as described by Harborne 14. The alkaloids are determined by Wagner’s Test 15; carbohydrates by Benedict’s Test; saponin by Foam Test; phenol by Ferric Chloride Test; flavonoids by Lead Acetate Test; diterpenes by Copper Acetate Test, terpenoids by Salkowski’s Test 16, aminoacids by Ninhydrin Test; proteins by Biuret Test, Tannins by Ferric Chloride Test); and oxalate by Ethanoic acid glacial 17.  Further detection of steroids was carried out by Harborne; detection of coumarin was done by Mace method 18 and quinone by conc. H2SO4.  Xanthoproteins by conc. HNO3 and NH3 Test 19, cardiac glycosides by Kellerkillani synthesis 20, anthocyanin by HCl and NH3 21, leucoanthocyanin by isoamyl alcohol; carboxylic acid by effervescence test and glycosides by Modified Borntrager's Test 22.

Antibacterial Activity Assay: Antibacterial activity of solvent extracts was determined by well diffusion method on MHA medium. The bacterial culture to be tested was inoculated as lawn culture using sterile swab. Wells were made on to the agar plate using sterile cork borer (6 mm diameter).

The extracts were applied to different wells in serially increasing volumes 30μl, 40μL and 50μL. DMSO (Dimethyl Sulphoxide) served as negative control and Amoxicillin (10μg) was used as the reference. The plates were labelled, covered and incubated at 37 °C for 24 hr.

Antifungal Activity Assay: The fungal mycelial suspension was spread on PDA plates and 6 mm diameter wells were made with cork borer. The extracts were applied to different wells in serially increasing volumes of 30μl, 40μL and 50μL.  DMSO served as negative control whereas Ketoconazole (10μg) was used as the reference. The plates were labelled, covered and incubated at 28 °C for 48-72 hr. The activity of the extracts was determined by measuring the diameter of zone of inhibition. 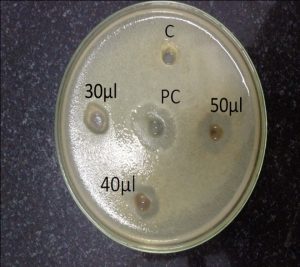 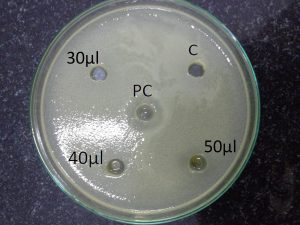 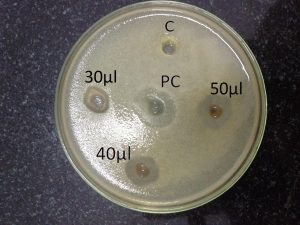 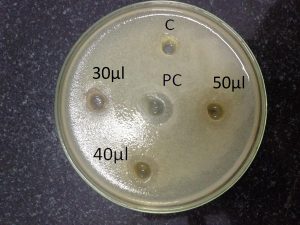 FIG. 1: ANTIBACTERIAL ACTIVITY OF ETHANOL EXTRACT OF A. BETTZICKIANA 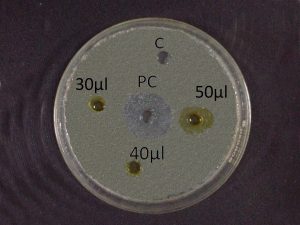 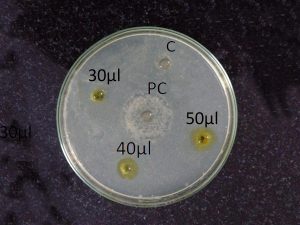 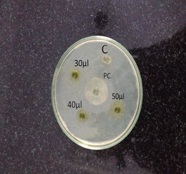 FIG. 2: ANTIFUNGAL ACTIVITY OF ETHANOL EXTRACT OF A. BETTZICKIANA

RESULTS AND DISCUSSION: The phytochemical analysis was carried out from the dried plant powder using ethanol, petroleum ether, acetone, chloroform and aqueous, which showed the presence of many bioactive compounds in the plant. Twenty different phytochemical tests were carried out for the five different extracts. Ethanol extracts showed the presence of fifteen major phytoconstituents. Plants generally produce many secondary metabolites which are biosynthetically derived from primary metabolites. Secondary metabolites are frequently accumulated by plants in smaller quantities 23. In this present study, the preliminary phytochemical analysis showed primary and secondary metabolites such as alkaloids, carbohydrates, saponins, phenols, flavonoids, diterpenes, tannin, terpenoids, steroid, oxalate, anthocyanin, leuco-anthocyanin, Xanthoprotein, coumarin and glycosides in the ethanol extract (Table 1).

Since these phytoconsti-tuents were found to be present in the extracts, it might be responsible for the potent antimicrobial capacity of A. bettzickiana. The presence of phytoconstituents makes the plant parts useful for treating different ailments.

TABLE 1: PHYTOCHEMICAL COMPOUNDS OF A. BETTZICKIANA

TABLE 2: ANTIMICROBIAL ACTIVITY OF THE ETHANOL EXTRACT OF A. BETTZICKIANA

TABLE 3: ANTIMICROBIAL ACTIVITY OF THE PETROLEUM ETHER EXTRACT OF A. BETTZICKIANA

TABLE 4: ANTIMICROBIAL ACTIVITY OF THE ACETONE EXTRACT OF A. BETTZICKIANA

TABLE 5: ANTIMICROBIAL ACTIVITY OF THE CHLOROFORM EXTRACT OF A. BETTZICKIANA

TABLE 6: ANTIMICROBIAL ACTIVITY OF THE AQUEOUS EXTRACT OF A. BETTZICKIANA

The chloroform extract did not show any activity in Epidermophyton floccosum. Vidhya et al., 2015 reported that the plant leaf showed very poor antibacterial activity. There is no previous report for antifungal activity of this plant. The plants have traditionally provided a source of hope for novel drug compounds, as plant herbal mixtures have made large contributions to human health and well being. The use of plant extracts with known antimicrobial properties can be of great significance for therapeutic treatment 28.

Recently there has been considerable interest in the use of plant material as an alternative method to control pathogenic microorganism and many components of plant products have been shown to be specially targeted against resistant pathogenic bacteria 29, 30.

CONCLUSION: The present study suggests that the crude ethanol extract of A. bettzickiana have great potential as antimicrobial agent against tested pathogenic bacteria and fungi. The present study reveals the presence of different phytochemical contents in the five different extracts of A. bettzickiana. Further studies are needed to isolate and characterize the bioactive principles to develop new antimicrobial drugs.

U. Arul Pamila* and S. Karpagam