Bindens pilosa L. is a cosmopolitan weed, originally from South America and common in all tropical and subtropical areas of the world. It is a small annual weed occurring all over the country.   Roots, leaves and seeds have been reported to possess antibacterial, antidysentric, anti-inflammatory, antimicrobial, and hypotensive activities. Extracts of this plant is used in southern Africa to cure malaria. In tropics also it is used on snakebite and malaria. It is used in traditional medicine as a remedy to treat glandular sclerosis, wounds, colds, flu and urinary tract infections. Leaf extracts in petroleum ether, chloroform, acetone, methanol and distilled water were tested against five bacteria. Maximum zone of inhibition was produced by acetone and petroleum ether extract against Proteus vulgaris, and least activity by methanol and aqueous extract against bacillus subtilis.

INTRODUCTION: Medicinal plants represent an alternative treatment in non-severe cases of infectious diseases. They are possible source for new potential antibiotics to which pathogen strains are not resistant 1. Bidens pilosa L. (Asteraceae) is an annual herb. It is a cosmopolitan weed originally from South America. Traditional healers claim some medicinal plants to be more efficient to treat infectious diseases than synthetic antibiotics 2.

Tetracycline was used as standard for comparative study. Culture was procured from NCL Pune. Following strains of bacteria were used - Bacillus subtilis NCIM 2063, Staphylococcus aureus NCIM 2079, Escherichia coli NCIM 2065, Proteus vulgaris NCIM 2831 and Pseudomonas aeruginosa NCIM 2036. Oven dried leaf extracts were used at concentration of 10 µg/ml dissolved in DMSO for antimicrobial study. Zone of inhibition recorded in mm in each set and average of three considered for comparison after 24 hours of incubation.

RESULT AND DISCUSSION: It was found that maximum contents are soluble in water while minimum in petroleum ether (Table 1). Various extracts were tested for gram -ve and gram +ve bacteria. The result obtained is presented in Table 2 and Plate 1 and 2. It is apparent from the results that Staphylococcus  aureus and Escherichia coli is more susceptible to all extracts, On the other hand B. subtilis was found to be most resistant to petroleum ether, chloroform and acetone extracts showing no inhibition. 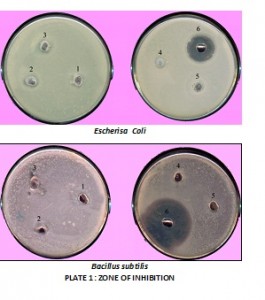 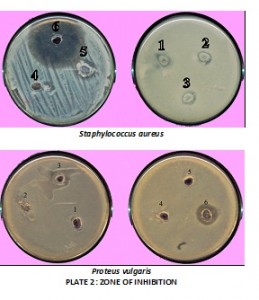