ABSTRACT: Coconut shell oil was extracted from raw coconut shells, collected from Thiruvallur District. These were extracted using various solvents based on the polarity which includes ethanol, chloroform, acetone, petroleum ether and aqueous. The antibacterial activity against the growth of Staphylococcus aureus, Enterococcus faecalis, Escherichia coli, Klebsiella pneumonia, Pseudomonas aeruginosa and Salmonella typhi was done. The antifungal activity against the growth of organisms such as Epidermophyton floccosum, Aspergillus niger, Penicillium, Microsporum canis, Candida albicans and Aspergillus flavus were tested. The extracts were compared with standards like novobiocin, amoxillin and ketoconazole for antibacterial and antifungal activity respectively. The results indicate that zone of inhibition increased when increasing the concentration of the extracts. Among the five extracts of coconut shell oil the ethanolic extract exhibited maximum antibacterial activity against six bacterial strains. Ethanol and petroleum ether extract showed maximum inhibitory activity against Epidermophyton and Candida albicans. This study showed that coconut shell oil possesses antimicrobial activity.

INTRODUCTION: Cocos nucifera Linn. (family Arecaceae) commonly known as coconut is an important fruit crop in tropical countries 1 and produced in 92 countries worldwide taking 10 million hectares of land. It is grown for its several beneficial products such as fiber, timber, functional food and oil. Coconut is mainly cultivated as an oil crop that is rich in lauric acid with a wide variety of other uses in addition to commercial oil production 2. Coconut water and kernel were used to treat abscesses, asthma, bronchitis, burns, constipation, dysentery, earache, flu 3, diarrhoea, hemostat, pediculicide 4. In India, the inflorescence infusions of coconut are used for the oral treatment of menstrual cycle disorders 5.

White flesh of the coconut fruit is used to treat fever and malaria 6, it is also used to relieve skin rashes caused by HIV infection 7. Coconut Shell oil had higher number of secondary metabolites and they reported to have many biological and thera-peutic properties 8.

MATERIALS AND METHODS: The samples of coconut shells were collected from the local market in Thiruvallur district, Tamil Nadu, India. They were sundried for few days to remove the moisture content. Then it is broken into small pieces and ground into course powder. Ground coconut shells (250 g) were heated in an earthen pot for a span of 3 hours giving a yield of 25 cc of oil. The oil was extracted with ethanol, chloroform, acetone, petroleum ether and aqueous (v/v) separately and preserved in airtight container for further studies. The bacterial and fungal cultures were procured from the Post Graduate and Research Department of Microbiology, Madras Christian College, Tambaram, Chennai, Tamil Nadu, India and subcultured.

Antibacterial Susceptibility Test: The well diffusion method on Muller Hinton Agar (MHA) medium was used to screen the antibacterial activity 9. The MHA plates were prepared by pouring media into sterile Petri plates and bacterial culture inoculated by spread plate technique. Wells of 6 mm diameter was bored  and  extracts were applied to different wells in serially increasing volumes of 30 µl, 40 µl and 50 µl. Dimethyl sulphoxide (DMSO) was used as negative control, novobiocin  and amoxicillin were used as  positive control for Gram (+) and Gram (-) bacteria respectively. The plates were incubated at 37 oC for 24 h 10. The diameter of inhibition zones was measured and tabulated.

Antifungal Susceptibility Test: All the extracts were screened for antifungal activity against pathogenic fungal strains such as Epidermophyton floccosum, A. niger, Penicillin, Microsporum canis Candida albicans and A. flavus. The fungi were grown on Potato Dextrose Agar (PDA) medium. The fungal mycelial suspension was spread on PDA plates. After solidification 6mm diameter wells were made and extracts applied in volumes of 30 µl, 40 µl and 50 µl. DMSO served as negative control and ketoconazole (10 µg) used as positive control. The plates were incubated at 28 oC for 48-72 hours. The diameter of the zone of inhibition was measured and the results were recorded.

RESULTS AND DISCUSSION: From the well diffusion method it is observed that the coconut shell extract exhibited higher antimicrobial activity against all the tested bacteria (Table 1). The highest zone of inhibition against S. aureus, Enterococcus faecalis, E.coli, Pseudomonas and Salmonella formed in ethanol extract and their zone of inhibition was higher than the control shown in Fig. 1.The petroleum ether extract showed more inhibition zone against Klebsiella. 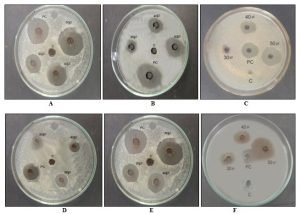 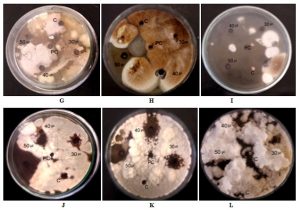 The extracts exhibit inhibitory activity against all the tested fungal strains such as Epidermophyton floccosum, A. niger, Penecillium, Microsporum canis, Candida albicans and A. flavus shown in Fig. 2 Inhibition zones of each fungal species is given in Table 2. The zone of inhibition of chloroform extract on Candida albicans and A. niger were high at all concentrations. From this study it is concluded that the petroleum ether extract of coconut shell oil was more active against the fungal pathogen especially in Epidermophyton floccosum and Candida albicans. The results of the study clearly showed that the effectiveness of the extract increases with increasing concentration as observed from the zone of inhibition.

CONCLUSION: Coconut shell oil regarded to have high therapeutic potential for drug preparation. The current study provided useful information concerning the various medicinal properties to protect humans against common skin diseases. Since the shells of Cocos nucifera and cashew nut discarded as waste - indeed comprising a major portion as agro waste in our country. Cashew Nut Shell oil has various phytochemical contents and it can be used as an antibacterial agent 11. This study reveals that Coconut shell oil can be used to produce antibacterial and antifungal agents and also it could serve as a cheap source of antimicrobial compounds replacing the conventional chemical antibiotics which give side effects to the mankind.