INTRODUCTION: The useful products obtained from plants directly or indirectly, demonstrate their importance to man Plants serve as a source of food 1, 2, 3 medicinal product 4, 5 energy 6 and shelter to man and his livestock 7. India is a varietals emporium of medicinal plants and is one of the richest countries in the world in regard to genetic resources of medicinal plants. It exhibits a wide range in topography and climate, which has a bearing on its vegetation and floristic composition.

Moreover, the agro-climatic conditions are conducive for introducing and domesticating new exotic plant varieties. In recent years, secondary plant metabolites (Photochemical), previously with unknown Pharma-cological activities, have been extensively investigated as a source of medicinal agents 8.

Thus, it is anticipated that Photochemical with adequate antibacterial efficacy will be used for the treatment of bacterial infections. Since time immemorial, man has used various parts of plants in the treatment and prevention of various ailments.

The aim of this study was to evaluate the activity of extracts from two plants against several Gram-positive and Gram-negative bacterial strains in vitro.

Collection: Plant samples (Juniperus communis and Solanum xanthocarpum) were collected from various tribes living in tribal pockets of Mt. Abu, arid zone of Rajasthan. These plants were used by these tribes in their daily lives to cure various ailments and few from Chunnilal Attar Ayurvedic Store, Ghat Gate, and Jaipur in the month of May, 2011.

Culture of Test Microbes: For the cultivation of bacteria, Nutrient Agar Medium (NAM) was prepared by using 20 g Agar, 5 g Peptone, 3 g beef extract and 3 g NaCl in 1 L distilled water and sterilized at 15 lbs pressure and 121°C temperature for 25-30 min. Agar test plates were prepared by pouring approximately 15 mL of NAM into the Petri dishes (10 mm) under aseptic conditions. A saline solution was prepared (by mixing 0.8% NaCl) in distilled water, followed by autoclaving and the bacterial cultures were maintained on this medium by regular sub-culturing and incubation at 37°C for 24-48 h. To prepare the test plates, in bacteria, 10-15 mL of the respective medium was poured into the Petri plates and used for screening. For assessing the bactericidal efficacy, a fresh suspension of the test bacteria was prepared in saline solution from a freshly grown Agar slant.

Preparation of Test Extracts: Crushed powder (50 g) of all the species were successively Soxhlet extracted with ethanol. Later, each of the homogenates was filtered and the residue was re-extracted twice for complete exhaustion, the extracts were pooled individually. Each filtrate was concentrated to dryness in vitro and redissolved in respective solvents, out of which 80 mg/10 discs i.e. 8 mg/disc concentration were stored at 4°C in a refrigerator, until screened for antibacterial activity.

Antimicrobial Assay by Disc Diffusion Method: For both, bactericidal in vitro Disc diffusion method was adopted 9 because of Reproducibility and precision. The different test organisms were proceeded separately using a sterile swab over previously sterilized culture medium plates and the zone of inhibition were measured around sterilized dried discs of Whatmann No. 1 paper (5mm in diameter), which were containing 1mg, 5mg and 10mg of the text extracts and reference drugs (tetracycline and Mycostatin for bacteria and fungi, respectively) separately.

Such treated discs were air-dried at room temperature to remove any residual solvent, which might interfere with the determination, sterilized and inoculated. These plates were initially placed at low temperature for 1 h so as to allow the maximum diffusion of the compounds from the test disc into the agar plate and later, incubated at 37°C for 24 h in case of bacteria and °C in case of fungi, after which the zones of inhibition could be easily observed. Five replicates of each test extract were examined and the mean values were then referred.

The Inhibition Zone (IZ) in each case were recorded and the Activity Index (AI) was calculated as compared with those of their respective standard reference drugs (AI = Inhibition Zone of test sample/Inhibition zone of standard).

RESULTS AND DISCUSSION: The profile of the medicinal plants used in the present investigation. The results of antimicrobial activity of the crude extracts of Selected Indian Medicinal Plants and insect (Juniperus communis and solanum xanthocarpum) showed good Antimicrobial activity against selected test bacteria and fungi (Table 1).

Overall, this extract showed appreciable activity against selected test bacteria and fungi and hence, it justifies their use in our traditional system of medicine to cure various diseases (Fig. 2, 3). 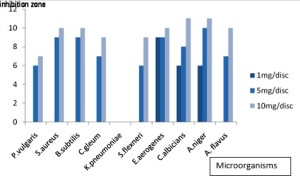 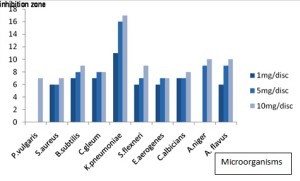 Juniperus communis: While screening the extracts of Juniperus communis well antimicrobial activity against the selected bacteria and fungi was observed. The alcoholic extract was found active against all the bacteria and fungi tested. Results, comparable to the standards, the maximum activity was shown by K, pneumoniae (14.6 mm) in methanolic extract. When antifungal activity of Solanum xanthocarpum was performed against above three funguses it was found that activity was appreciable butshowed maximum activity against Candida albicians (7.3 mm) and minimum activity was shown Aspergillus niger (6.3 mm).

CONCLUSION: The multipurpose medicinal plants are the inimitable source of various types of compounds having diverse chemical structures. Very little work has been done on the biological activity and plausible medicinal applications of these compounds and hence extensive investigation is needed to exploit their therapeutic utility to combat diseases. The present results therefore offer a scientific basis for traditional use of the various extracts of Juniperus communis and Solanum xanthocarpum. These results explain that Indian Medicinal Plants have potentials as antimicrobials. Further,more or less both the selected Indian Medicinal Plants have also possessed antimicrobial potential against alltest bacteria and fungi which explains that their use in daily life will generate a resistance or immunity to fight against microorganisms.

ACKNOWLEDGEMENT: Author acknowledges with thanks the financial support from Department of Science and Technology, Government of Rajasthan, in the form of Centre with Potentials for Excellence in Biotechnology, sanction no. 7(17) (9) Wipro/Gaprio/ 2006/7358-46(31/10/2008).