ANTIMICROBIAL ACTIVITY OF METHANOLIC EXTRACT OF BARK OF PRUNUS CORNUTA

ANTIMICROBIAL ACTIVITY OF METHANOLIC EXTRACT OF BARK OF PRUNUS CORNUTA

ABSTRACT: Prunus cornuta (family Rosaceae) commonly known as ‘Himalayan Bird Cherry’, is a deciduous tree growing to 15 m (49ft 3in) at elevations of 2100-3500 meters. It is hardy to zone (Uttarakhand) 5. It is in flower in May, and the seeds ripen from July to October. The flowers are hermaphrodite and are pollinated by insects and birds. It can grow in semi-shade (light woodland) or no shade. It prefers moist soil. Plant extract (sample named PC-1) of Prunus cornuta bark was prepared in methanol and the prepared extract was subjected to Phytochemical screening which shows the presence of steroids, terpenoids, alkaloids, tannin, saponin, carbohydrate, protein etc. The methanolic extract ( sample named PC-1)   of powdered bark of Prunus cornuta  were examined for their antimicrobial activity using agar well diffusion method against different pathogenic bacterial stains like Staphylococcus aureus, Pseudomonas aeruginosa, Aspergillus niger and Candida albicans. Thus minimum inhibitory concentration(MIC) of resulting extract were also checked. The sensitivity of the pathogens was also checked with standard antibiotics erythromycin, Fluconazole, and N-saline. The present study was intended to evaluate the qualitative analysis of P.cornuta methanolic extract and also to examine their antimicrobial activity against different pathogenic bacteria.

INTRODUCTION: The Genus Prunus belongs to the family Rosaceae and consists of about 430 species of deciduous, evergreen trees and shrubs growing mainly in the temperate regions of the Northern hemisphere. About nineteen Prunus species grow wildly in India in the Himalayan regions, the majority of these species are of considerable horticultural importance 1, 2. Quite a few of species find applications for their medicinal values 3.

Prunus species have been reported as an antipyretic, a refrigerant, a thirst quencher and for the treatment of Leprosy and Leucoderma 4. Medicinal plants represent a rich source of antimicrobial agents. Plants are used medicinally in different countries and are as a source of many potent and powerful drugs 5. Antimicrobial agents disrupt microbial process that differ from those of the host. They may damage pathogens and they are widely employed to cure bacterial diseases. Antimicrobial agents that reversibly inhibit growth of bacteria are called bacteriostatic whereas those with irreversible lethal action on bacteria are called as bactericidal 6, 7.

Prunus cornuta (or Himalayan Bird Cherry) belong to a family Rosaceae is a deciduous medium-sized tree with grey-brown to brown bark.

Leaves are oblong to lance- shaped, 8 - 15 cm long, long-pointed, with finely toothed margin. Small white flowers are borne in long drooping clusters, 10 - 15 cm long. Flowers are up to 1cm across, with round petals and blunt sepals. Fruits are round cherries, about 8 mm, in a long raceme, initially red, maturing to dark purple and black.

The fruit often gets infected by an Insect, and becomes long and horn-like, from which comes its species name cornuta, meaning horn-like. The fruit is edible, and the leaves are used for fodder.

Himalayan Bird Cherry is found in the Himalayas, at altitudes of 2100 - 3500 meters. Flowering: April-June. Medicinal plants represent a rich source of antimicrobial agents. Plants are used medicinally in different countries and are a source of many potent and powerful drugs. Considering the vast potentiality of plants as sources for antimicrobial drugs with reference to antibacterial and antifungal agents, a systematic investigation was undertaken to screen the antibacterial and antifungal activity from P.cornuta Prunus species have been reported as antipyretic, refrigerant, useful for thirst, leprosy, and leucoderma.

Preparation of Extract: The powdered sample was extracted with methanol solvent by using Soxhlet extractor for 72 hrs. After complete extraction, the methanol was evaporated through the help of Rotatory Evaporator under reduced pressure to obtain a methanolic crude extract. The obtained crude extract was examined for qualitative analysis and antimicrobial activity.

RESULTS AND DISCUSSION: The results obtained in the present study showed that methanolic extract of bark of P.cornuta had significant antimicrobial activity against different pathogenic gram positive and gram negative bacteria. Zone of inhibition and agar well diffusion method determined the antimicrobial activity of extract. 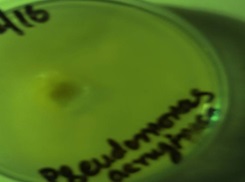 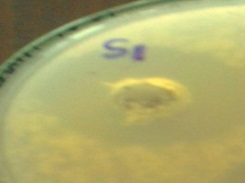 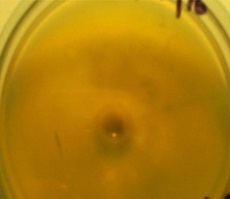 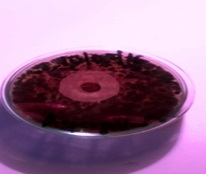 *NA, No activity; NT, Not tested

ACKNOWLEDGEMENTS: This study was supported by the NFST Fellowship (UGC) to