INTRODUCTION: There is a continuous and urgent need to discover new anti-microbial compound with diverse chemical structure and novel mechanism of action because there has been an alarming increase in incidence of new and re-emerging infectious diseases. Another big concern is the development of resistance to the antibiotics in current clinical use.

Psidium guajava, is an important food crop and medicinal plant in tropical and subtropical countries is widely used like food and in folk medicine around of the world. This aims a comprehensive of the chemical constituents, pharmacological and clinical uses. Different pharmacological experiments in a number of in-vitro and in-vivo models have been carried out.

Also it has been identified the medicinally important phytoconstituents. A number of metabolites in good yield and some have been shown to possess useful biological activities belonging mainly to phenolic, flavonoid, carotenoid, terpenoid and triterpene. Extracts and metabolites of this plant, particularly those from leaves and fruits possess useful pharmacological activities. A survey of the literature shows P. guajava is mainly known for its antispasmodic and antimicrobial properties in the treatment of diarrhoea and dysentery. It has also been used extensively as a hypoglycemic agent. Many pharmacological studies have demonstrated the ability of this plant to exhibit antioxidant, hepatoprotective, anti-allergy, antimicrobial, anti-genotoxic, antiplasmodial, cytotoxic, antispasmodic, cardioactive, anti-cough, anti-diabetic, anti-inflammatory and anti-nociceptive activities, supporting its traditional uses. Suggest a wide range of clinical applications for the treatment of infantile rotaviral enteritis, diarrhoea and diabetes.

The boiled water extract of Psidium guajava plant leaves and bark are used in medicinal preparations which are utilized as remedies for dysentery, diarrhoea and upper respiratory tract infections while guava fruit paste and cheese are popular dishes in Florida, the West Indies and parts of South America. In Malaysia, Psidium guajava is used for stomach ache and gastroenteritis; leaf, root, and bark extracts are used for treatment of diarrhoea, leucorrhoea, cholera, external ulcers and skin diseases. Psidium guajava leaf extract contains guajava polyphenol that has an anti-oxidation action. The flower and leaf of the plant have been reported to have antibiotic activity. In the present study antimicrobial potentiality of the P. guajava leaves was investigated against a few clinically isolated as well as standard microbial cultures 1. Manilkara zapota belonging to family Sapotaceae and Genus Manilkara. The common names of Manilkara zapota are Sapote, Sapodilla, Manilkara -zapotilla, Manilkaraachras, Mimusopusmanilkara, Achraszapota and Achrassapota

Procedure: Agar slant were prepared form Nutrient agar powder. Suspend 28 gm of nutrient agar powder in 1000 ml of distilled water, heat till boil to dissolve completely. Then poured into 9 test tubes approximately 10 ml each, plugged with cotton and tied with thread and sterilized in autoclave for 15 - 20 min at 121.6 ºC at 15 lbs. pressure. After sterilization the test tubes were placed on slanted position to prepare slants of nutrient agar in test tubes. Then cultures were inoculated in zig-zag manner and incubated at 37ºC for 24 - 48 h 2.

Procedure: Nutrient agar for the 25 petri plates were prepared using 16.8gm of nutrient agar in 600ml of distilled water. Bring to boil to dissolve completely and plugged with cotton, tied with thread and sterilized using autoclave at 121.6 ºC at 15 lbs. pressure for 15 - 20 min.

Procedure: Soft agar was prepared by using 1-1.5gm of agar-agar powder in 100 ml of distilled water. Bring to boil to dissolved completely. Then in hot conditions transferred to 25 test tubes each containing 2 - 3 ml of soft agar then each test tube were plugged with cotton and tied with thread and sterilized using autoclave at  121.6 ºC at 15 lbs. pressure for 15 - 20 min. After sterilization cooled till room temperature.

Procedure: Saline was prepared using 0.85 g of sodium chloride in 100 ml of distilled water. Dissolved completely and plugged with cotton and sterilized using autoclave 121.6 ºC at 15 lbs. pressure for 15 - 20 min.

Extraction of Plant Material: Leaves of P. guajava and Manilkara zapota were collected air dried and then powdered. 10 g of each leaf powder were used for methanolic extraction. The extraction method used is Soxhlet extraction method. In solvent extraction, the sample was extracted in solvent kept on a rotary shaker overnight and then the filtrate was collected. The solvent was then evaporated to get the concentrated solution of extract then the solvent were used for anti-microbial assay 3.

Anti-microbial Study: Antimicrobial activity was performed by well method. Nutrient agar slants was prepared, 2.8gm agar weighed and dissolved in 100ml of water and then non adsorbent cotton was plugged on flask and sterilized it in autoclave at 121 ºC at 15 lbs. pressure for 15-20 min 6. After autoclave flask was removed from autoclave and in hot conditions approximately 10ml of agar was taken in 9 test tubes and kept tilted for solidification. A loop full of old culture taken in aseptic area and spread in zig-zag manner on the slant. Applied same procedure for other slants. Prepared 2 slants of same organism. After inoculation kept it for incubation for 24 - 48 h at 37ºC 7. After incubation Nutrient broth was prepared by taking peptone, meat extract, sodium chloride and distilled water. All slants are removed from incubator and loop full of growth is taken in aseptic area and transferred to the broth. Applied same procedure for all flasks of broth. 2 flasks were prepared for each micro-organism. After transfer of micro-organism to the broth, the flasks were place in incubator for 24 - 48 h at 37 ºC 8. After the 24 h growth of flask were tested against the 0.5 McFarland reagent. In between the procedure 25 petri plates are sterilized in hot air oven.

After cooling soft agar were poured into petri plates along with the micro-organism and spreaded using glass spreader which were previously sterilized using alcohol. After spreading wells are poured per plate 3 using metal borer in aseptic area 11 - 12. There different concentrations of  two leaf extract were prepared (Psidium guajava: Manilkara zapota) and 1ml of extraction mixture were place in well using 1ml micro pipette which was previously sterilized using alcohol in aseptic area. After placing the mixture into well labeled. Similarly standard drug were poured into well. After that all plates were placed in incubator for 24 - 48 h at 37ºC.

RESULTS: In the present study P. guajava leaf and Manilkara zapota leaf extracts extracted in methanol were investigated at five different concentrations for their antimicrobial potentiality against 2 gram negative micro-organism and 2 gram positive micro-organism clinically important microbial strains. The extract concentration was more active against gram-positive bacterial strains studied. The zone of inhibition was measured in the millimeter (mm). Details of the result are shown in Table 1, 2, 3 and 4. 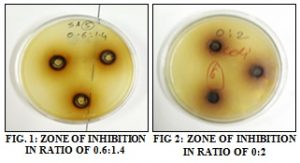 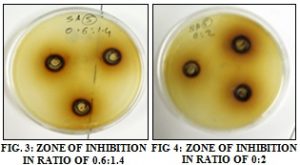 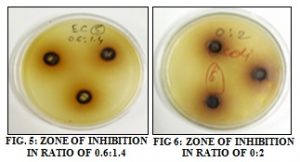 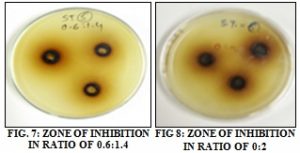 DISCUSSION: Recently, there has been considerable interest in the use of plant material as an alternative method to control pathogenic microorganism and many components of plants products have been shown to be specially targeted against resistant pathogenic bacteria. The emergence of multidrug resistant strain of many pathogens is a serious threat and makes chemotherapy more difficult. Moreover, the current cost of most of the chemotherapeutic agents is unbearable to the public especially in developing countries like India. Therefore attempts must be directed towards the development of effective natural, non-toxic drug for treatment.

The present work was a pioneer to explore the antimicrobial property of P. guajava and Manilkara zapota. Many reports are available on antioxidant, hepatoprotective, anti-allergy, anti-microbial, antigenotoxic, antiplasmodial, cytotoxic, antispasmodic, cardioactive, anticough, anti-diabetic, anti-inflammatory and anti-nociceptive activities of plants. The methanolic extract of P. Guajava and Manilkara zapota plant leaves was highly active against gram positive while the extracts were equally active against gram-negative strains. The acetone extract of P. guajava and Manilkara Zapota should further be studied for its phytochemical constituents in order to elucidate the active principle within the extract which can turn out to be a novel antimicrobial agent of the future.

CONCLUSION: It is concluded that this study would lead to the establishment of some valuable compound that has to be used to formulate new, different and more potent antimicrobial drugs of natural origin. Further studies are needed to identify the biologically active compounds and to evaluate the efficiency of the compound against pathogenic microorganisms associated with various human diseases.

ACKNOWLEDGEMENT: We are highly grateful to Bharati Vidyapeeth’s college of pharmacy, CBD Belapur, Navi Mumbai allowing the use of laboratory facilities to carry out the research work. I whole heartedly thank my colleague Mr. Aditya D. Ghuge and Mr. Aniket L. Indulkar for his timely help with kind suggestions throughout the research work.