ABSTRACT: Nanotechnology is an innovative and escalating field that has made its contribution to all spheres of human life. Conventional synthesis of nanoparticles suffers from serious problems like high temperature, poor yield, longer reaction time, and use of toxic and highly sensitive compounds. Green synthesis of nanoparticles is an emerging field which is known to eliminate / minimize the aforementioned drawbacks. In the present investigation, stable silver nanoparticles were synthesized in good yield by chemical reduction of silver nitrate in ionic liquids such as [BMIM] BF4 (IL-1), [BMIM] PF6 (IL-2), [BEMIM] BF4 (IL-3) and [BEMIM] PF6 (IL-4) at room temperature. X-ray diffraction (XRD) and scanning electron microscopy (SEM) have been employed for the characterization of structure and morphology of the synthesized silver nanoparticles. The as synthesized nanoparticles and pure ionic liquids were screened for their anti-microbial activities and it was found that both the pure ILs and silver nanoparticles possess significant antimicrobial activity.

INTRODUCTION: The development of cleaner technologies is a major emphasis in green chemistry. Among the several aspects of green chemistry, the reduction / replacement of volatile organic solvents from the reaction medium is of utmost importance. The use of a large excess of conventional volatile solvents required to conduct a chemical reaction creates ecological and economic concerns. The search for a non-volatile and recyclable alternative is thus holding a key role in the field of chemical synthesis. The use of fused organic salts, consisting of ions, is now emerging as a possible alternative.

A proper choice of cations and anions is required to achieve ionic salts that are liquids at room temperature and are appropriately termed room temperature ionic liquids (RTILs). Ionic liquids (ILs) have been attracting considerable attention in the past years. These substances have been extensively used as solvents in many organic transformations with interesting results when compared to conventional organic solvents 1. Moreover, the investigation of the toxicity 2 and biological activity (e.g. antitumor, anti-cancer, DNA cleavage) of ILs is an emerging area of research 3. Another important characteristic attributed to ILs concerns their application as antimicrobial agents. Several studies have shown that they display great activity against gram-positive and gram-negative bacteria, fungi and algae. Previous reports 4 have shown that this activity relies mainly on the chain length of the investigated ILs.

In general, a higher activity is attributed to ILs assembled with longer carbon chain lengths. Room-temperature ionic liquids (RTILs) have attracted immense interests only in recent years as a replacement for classical molecular solvents in fundamental researches and application including separation, catalysis, organic synthesis, and so on 5. Synthesis of nanoparticles exploiting ILs emerged as a new interest in the field of green chemistry. Nanoparticles have been extensively investigated due to the attraction of their unique physical properties, chemical reactivity, and potential applications with high academic and industrial impacts 6. Silver nanoparticles may have an important advantage over conventional antibiotics in that it kills all pathogenic microorganisms, and no organism has ever been reported to readily develop resistance to it. Researchers believe that the potential of colloidal silver is just beginning to be discovered.

Nanostructure materials have been synthesized using ionic liquid as green electrolytes. Moreover, silver nanoparticles have different important applications: Like for instances, they might be used as spectrally selective coatings for solar energy absorption, as an intercalation material for electrical batteries and as optical receptors for biolabeling 7, 8. Ag nanoparticles are well known as inhibitory and antibacterial materials. However, resistance to antimicrobial agents by pathogenic bacteria has come to the light only in recent years. This is a major challenge for the health care industry, and has been widely studied 9-11. In the present work, an attempt has been made to synthesize silver nanoparticles in ionic liquids [BMIM] BF4, [BMIM] PF6, [BEMIM] BF4 and [BEMIM] PF6 with sodium citrate as a reducing agent. Effects of the reduction temperature and the precursor concentration on the size of the silver nanoparticles were investigated. The synthesized silver nanoparticles were characterized by XRD and SEM analyses and their antimicrobial activities were screened for three gram (+) and three gram (-) bacteria.

Synthesis of Ag (0) Nanoparticles: The ILs used in this study was synthesized according to the procedures reported in the literature 12, 13.

Synthesis of silver nanoparticles was achieved by taking two solutions of silver nitrate with a concentration of 0.03 mol/L and sodium citrate with a concentration of 0.02 - 0.05mol/L in ionic liquid. The sodium citrate solution was then added drop wise into the AgNO3 solution under a vigorous stirring at a temperature range of 25-40 °C. The addition process was conducted for 0.5hr and the solution was continuously stirred for another 3 hr 14. After adjusting the pH at 8.0, the brown colloid contained silver nanoparticles were formed. The products were separated by centrifugation, washed with absolute ethanol for several times, then dried in vacuum at 60 °C for 48 hr for further characterization.

Characterization: The 1H-NMR and 13C-NMR spectra were recorded in CDCl3 and DMSO-d6 on a Joel JNN ECX 400P spectrometer. The FT-IR spectra were obtained on a Varian 800 FT-IR as thin films or for solid samples. The structure and morphology of the products were characterized by the X-ray diffraction (XRD) patterns on a Philips Xpert X-ray diffractometer with Cu Kα radiation (λ = 0.15406 nm) employing a scan rate of 1°/ min in the 2θ range from 20° to 80°. Surface morphology and the distribution of particles were characterized by a LEO 1430VP scanning electron microscopy (SEM) at an accelerating voltage of 15 kV.

Microbial Experiments of Ag (0) Nanoparticles: Antibacterial activity of the Ag(0) nanoparticle was investigated against six test strains, Staphylococcus aureus; Micrococcus luteus; Bacillus cereus (gram negative bacteria) and Escherichia coli; Pseudomonas aeruginosa; Aeromonas hydrophila (gram positive bacteria) by broth dilution assay. A series of fifteen test tubes were filled with 0.5ml sterilized nutrient broth. Sequentially, test tubes 2 – 14 received, additional 0.5ml of the sample serially diluted to create a concentration sequence from 500 – 0.06μg. The first test tube served as the control. All the test tubes received 0.5ml of inoculums. The test tubes were vortexed well and incubated for 24 h at 37 °C. The resulting turbidity was observed, and after 24 hr the Minimum Inhibition Concentration (MIC) was determined where growth was no longer visible by assessment of turbidity by optical density readings at 600 nm15. 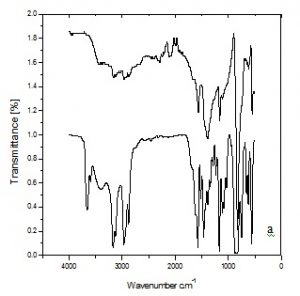 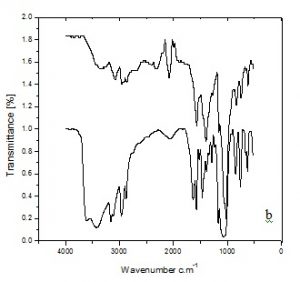 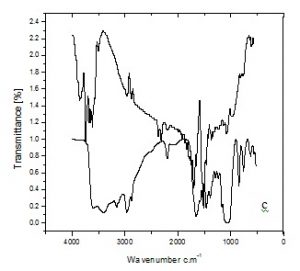 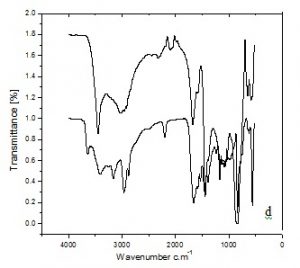 Compared with the pure ionic liquids several significant changes are observed in the FTIR spectra of the Ag (0) nanoparticles in ionic liquid solutions. The changes of bands demonstrate that Ag (0)nanoparticles has an effect on the electron cloud density of imidazole ring. Based on the analysis of FT-IR spectra, it is concluded that there are strong interactions between RTILs and AgNO3, and the interactions focus on the imidazole ring of RTILs. Present findings showed similarity to the results previously reported 16.

The relative intensity of the diffraction peaks of Ag (0) samples prepared with different ionic liquids deviates from one to one, suggesting that an each ionic liquid has different nanostructures in certain direction of the growing material. The crystallite size of the Ag (0) samples for IL1, IL2, IL3 and IL4 was determined from the most intense diffraction peak by using the Debye-Scherer’s equation was 3.1nm, 49.9nm, 6.7nm and 9.61nm respectively. From the XRD analysis, it is apparent that, anionic part of the IL does not play a major role for the determination of crystallite nature, but, substitution at 2nd position of the imidazole ring produces the remarkable change in the crystalline nature of the nanoparticles. 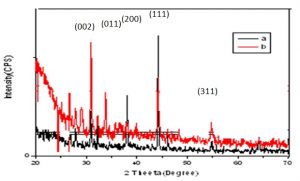 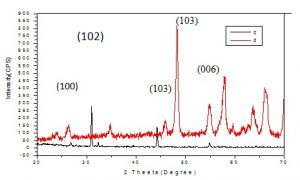 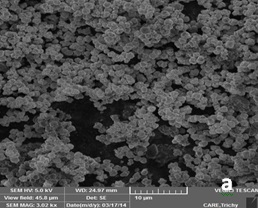 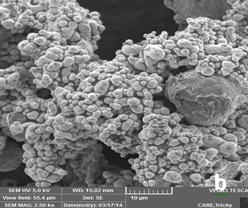 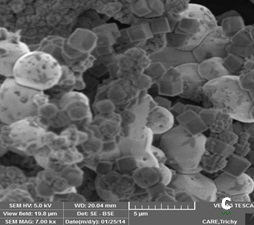 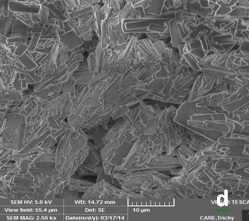 The morphologies and dispersity of synthesized nano structured Ag (0) samples from ionic liquids was investigated by scanning electron microscope (SEM) which their records at different magnifications are shown in Fig. 3. It can be seen from the SEM images that the morphology of Ag (0) from IL1 and IL2 exhibits nanospheres (Fig. 3a, b). When the substitution is introduced in the second position (imidazolium ring) of the IL, the morphology and size of Ag (0) nanoparticle turned as cube shaped particles (Fig. 3c). When highly coordinated anion PF6- is introduced instead of BF4- in IL-3 i.e. IL-4, the morphology and size of Ag (0) turned as rod like shaped particles (Fig. 3d). It is evident from the result that, the morphology of nanoparticles changes by changing ionic liquids. Structure of ILs plays an important role in the size as well as shapes of the nanoparticle formed.

From the XRD data, it is obvious that the antibacterial activity of Ag (0) nanoparticle increases with decreasing in particle size. The antibacterial activity also depends on the surface area and concentration of nanoparticles, while the crystalline structure and particle shape have little effect. Smaller the size of the particles, larger will be the surface area available for interaction. Inactivation of bacteria by Ag (0) involves the direct interaction between Ag (0) nanoparticles and cell surfaces, which affects the permeability of membranes where nanoparticles enter and induce stress in bacterial cells, subsequently resulting in the inhibition of cell growth and eventually in cell death.

CONCLUSION: Silver nanoparticles were prepared in presence of [BMIM] BF4, [BMIM] PF6, [BEMIM] BF4 and, [BEMIM] PF6 as a low cost and halide-free room temperature ionic liquids (RTIL). This environmentally benign green method was found to be fast, simple and low temperature method which considerably shortens preparation time and avoids the complicated synthetic procedures. Silver nanoparticles were characterized with FT-IR, XRD, SEM and their size and shapes were confirmed. Results clearly demonstrate that silver nanoparticles have remarkable effect on the electron cloud density of imidazole ring of the ILs. Size controlled silver nanostructures with distinct morphologies have been successfully synthesized and this process was found to be simple, fast and feasible. The synthesized silver nanoparticles exhibited an excellent antibacterial property against gram positive and gram negative pathogenic bacterial strains.

ACKNOWLEDGEMENT: The authors thank the Principal and the Management of Sir Theagaraya College, Chennai - 600 021 and Government Arts College, Thiruvannamalai for their constant encouragement and support.

K. Rajathi * and A. Rajendran