Phellinus and Ganoderma are a folk medicinal, wood inhabiting fungus, recently been studied for its pharmacological activities. In the current study, Acetone, Methanol and ethyl acetate extracts were prepared from species of Phellinus and Ganoderma. The active compounds of acetone and methanol extracts have the same polarity but they show different activity. The antimicrobial assay showed zone of inhibition against different strains of Acinetobacter and acetone extract gave best results. Therefore, the extract of Phellinus may contain different bioactive compounds like sesquiterpens, triterpens etc that may act on Acinetobacter. A significant broad spectrum anti-bacterial activity from Phellinus spp. was revealed through the study.

Polysaccharides isolated from mushroom β-glucan is well known for immuno-modulatory properties, however the researchers and health care professionals are now aware that many secondary metabolites, extra cellular secretions of mycelia have antibacterial, antiviral properties. Also the exudates from mushroom mycelia are active against Plasmodium falciparum (protozoa that cause malaria) and other micro-organisms.

In a recent In vitro study, extracts of 204 mushroom species (polypores and gilled mushroom) were tested and 75% of polypores and 45% of agarics showed antimicrobial activity, inhibiting growth of wide variety of micro-organisms. Species of Ganoderma was effectively active against Bacillus subtilis and less active against Gram negative E. coli and Pseudomonas aeruginosa. Polyacetylenes also occur frequently in mushrooms, which are responsible for its anti-bacterial activities 1.

Phellinus is another potent mushroom which has not been extensively studied for medicinal uses in comparison with other. Amongst the several species of Phellinus only Phellinus linteus has received much attention.

Ganoderma is a genus of polypores which grow on wood. They can be differentiated from other polypores because they have a double walled basidiospore. The genus is divided into two sections - Ganoderma has a shiny cap surface (like Ganoderma lucidum) and Elfvingia has a dull cap surface, like Ganoderma applanatum. The name Ganoderma is derived from the Greek ganos "brightness, sheen", hence "shining" and derma "skin" 8.

Some of its actions and properties includeAnti-allergin, antioxidant, analgesic, antifungal, anti-inflammatory, antitumor, antiviral, antiparasitic, cardiovascular, antidiabetic, immunomodulating, hepatoprotective, hypotensive and hypertensive etc. Of course something this versitile has many uses and a fraction of them are:Tonic, immune booster, allergies, blood pressure stabilizer, HIV support, etc. 9.

General mode of action of the Antimicrobial Compounds: Based on the effectiveness of the drugs these are primarily classified into two categories as a narrow spectrum drugs which are effective only against a very limited variety of pathogen while others are broad spectrum drugs which attack different kind of pathogen. Drugs may be further classified based on their action against a particular group of microorganisms as antimicrobial, antifungal, antiprotozoal and antiviral. Some antimicrobial drugs can be effective against more than one group e.g sulfonamids are active against bacteria and some protozoa.

Furthermore, the mode of action is to interfere with microbial metabolism with out producing a like effect in a host cell 3, 4, 6.

Human Pathogenic Microorganisms: The most bacteria that live on the skin or in the gut of human and are usually harmless but can cause disease under some certain condition. Some species of bacteria are known as pathogen but affect less while some are highly pathogenic and are lethal. Some bacteria had caused terrible epidemics in part and today are much less dangerous, the reason could be the development of vaccines of resistance in humans 7,  2.

Mushroom which are used by traditional healers in their treatment of infection, with the hope of isolating and identifying the compound responsible for its activity. Several extracts using various solvents have been surveyed for the antimicrobial activity.

Preparation of Extracts of Phellinus and Ganoderma samples 5: 5gm powder of fruiting bodies + 100ml above mentioned solvents respectively. Incubate in waterbath at 60oC for 4-6 hours. Filter the above mixture. Take supernatant and concentrate it by using rotar evaporation. Dry the rotar flask and take its final weight. 10ml of solvent is added to dissolve the extract. Extracted samples are used for further experiments.

Broth Tube Dilution Method: A set of tube containing 9ml broth medium was prepared. To the first tube, known amount of Phellinus sample extract was added and the solution was mixed thoroughly. This was followed by serial dilution. 0.1ml of suspension was added to each tube. Incubate at 37oC for 24 hours.

Antimicrobial Assay by Disc Diffusion Method 10: Acinetobacter strains were revived. 0.1ml suspension of each strain was spread on Nutrient agar. Sterile Whatmann filter paper discs were placed on these plates. 40 microliters of the extracted samples were loaded on the respective discs. These were incubated at 37oC for 24 hours.

TABLE 3: TOTAL YIELD OF PHELLINUS EXTRACT MADE AT DIFFERENT SOLVENT. 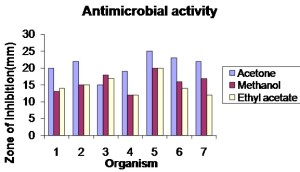 Antimicrobial activity Ganoderma against different Bacterial Strains: Ganoderma is a medicinal mushroom that is used for antimicrobial activity against  Escherichia coli 2064, Candida albicans 3017, Bacillus subtilis, Staphylococcus aureus, Escherichia coli 724, Candida albicans 1637, Acinetobacter strains . All these organisms showed a good inhibitory effects at the concentration 20 microliter. But the Acinetobacter strainswere resistant to the extract, hence to check the further anitimicrobial activity they were screened against other medicinal mushroom known as Phellinus.

Total yield of Phellinus species extracted in different solvents: The respective extracts in ethyl acetate, methanol and acetone solvents were screened against the seven strains of Acinetobacter for the activity. It was observed that though the percent yield increases, it did not show any trade. The acetone and ethyl acetate have same polarity but they differ in their activity. The Methanol extract have less polarity as compared to Acetone and Ethyl acetate, hence it show comparatively good activity as compared to ethyl acetate. This indicated that the active compound has high polarity and present in Acetone extract:

Broth Tube Dilution Method: After the respective incubation of all the seven strains of Acinetobacter with the Phellinus extracts, there was no growth or turbidity observed. This shows the inhibitory action of Phellinus on the Acinetobacter strains.

Antimicrobial Susceptibility Testing: The Acinetobacter strains showed significant inhibitory results with respect to acetone extract as compared to those of methanol and ethyl acetate extracts. Acinetobacter strains were tested against the two standard antibiotics Erythromycin and Ampicillin. It was observed that all the strains were resistant to both the antibiotics. 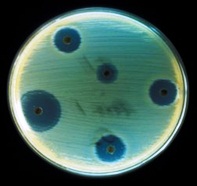 (A) ANTIMICROBIAL SUSCEPTIBILITY TESTING OF PHELLINUS AGAINST ACINETOBACTER STRAINS. 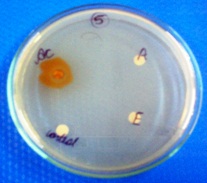 Ethyl acetate:Toluene solvent system gave the best results as compared to Methanol:Chloroform solvent system. Thus comparing the standards, it can be concluded that the sesquiterpenes, triterpenes, alkaloids, etc may be one of the components in the Phellinus extract which may actually be acting on Acinetobacter strains; thus contributing to the overall inhibition.

CONCLUSION: The active compounds of Acetone and Methanol extracts have the same polarity but they show different activity. The antimicrobial assay showed zone of inhibition against different strains of Acinetobacter and acetone extract gave best results. Therefore, the extract of Phellinus may contains different bioactive compounds like sesquiterpens, triterpens etc that may act on Acinetobacter.

The extract of Phellinus was found to be stable in alkaline and acidic conditions. Thus it can be used as an oral antibiotic. Phellinus could be potent herbal drug as antibiotics.