ANTIMICROBIAL AND ANTI-INFLAMMATORY POTENTIAL OF THE LEAF EXTRACTS, COLUMN FRACTIONS AND COMPOUNDS OF THE MEDICINAL PLANT JASMINUM FLEXILE VAHL

ANTIMICROBIAL AND ANTI-INFLAMMATORY POTENTIAL OF THE LEAF EXTRACTS, COLUMN FRACTIONS AND COMPOUNDS OF THE MEDICINAL PLANT JASMINUM FLEXILE VAHL

INTRODUCTION: The Jasminum genus is a widespread genera of medicinal plants utilized since ancient times 1. According to reports, there are 500 species of plants in the Jasminum genus 2. Among these, roughly 200 species are found in the Oleaceae family, including shrubs, vines and trees endemic to tropical and mild temperate climates. A careful evaluation of these species revealed only 89 valid species, of which only 40 species grow in the Indian sub-continent 3. Different parts of the Jasminum plant (such as leaves, stems, flowers and roots) have been widely used to prepare several folk medicines. The existence of natural compounds in Jasminum species, particularly secondary metabolites, bestow a wide range of medical applications to it 5, 6, 7. Jasminum grandiflorum are one species of this genera that is well investigated for its medicinal potential and constituent metabolites. The various extracts of Jasminum grandiflorum leaves showed significant antimicrobial activity.

The antibacterial activity of the hot ethanol extract of leaves of Jasminum grandiflorum (10μg/ml) against S. mutans and L. acidophilus was shown to be statistically significant (P≤0.05) at lower doses, with MIC values of 6.25 μg/ml and 25 μg/ml, respectively 9. The fruit methanolic extract showed a significant inhibitory effect against the plant pathogen Xanthomonas campestris and the animal pathogen Aeromonas hydrophila with a zone of inhibition of 18.33±0.47mm and 13.66±0.47mm at 100μg/ml respectively, which were equivalent to that of the standard 10.

A topical formulation named Jatyadighrita, a polyherbal preparation with Jasminum grandiflorum is one of the herbs that was analyzed for its anti-inflammatory potential. When compared to the standard diclofenac sodium (33%), the formulation displayed about 50% inhibition of croton oil-induced ear edema 11.

In-vitro and in-vivo models were used to study the anti-inflammatory efficacy of the solvent-free methanolic extract of the dried leaves. The anti-inflammatory effects of Jasminum grandiflorum leaves are likely related to their high phenolic content (2.25±0.105 mg/l of gallic acid equivalent), reducing power and free radical-scavenging ability 12, 13.

Yet another species of Jasminum, namely Jasminum flexile Vahl, cultivated in Asian countries and sub-tropical regions such as France, Italy, Japan, Morocco, and Egypt 4, 14, 15, is widely explored for its medicinal applications and cosmetic preparations 14.

In our previous work on this plant, we reported the physicochemical characteristics, fingerprinting, antibacterial and anti-oxidant studies of the hexane and hydroethanolic extracts of leaves of Jasminum flexile. In the present study, we attempt to investigate the antibacterial and anti-inflammatory potential of the hydroethanol extract of leaves of Jasminum flexile and its fractionates.

The samples were authenticated at the Fischer Herbarium (FRC) at the Institute of Forest Genetics and Tree Breeding in Coimbatore, verified by Dr. Kunjikanan, and acknowledged by the Royal Botanical Gardens of the United Kingdom. The specimen was deposited in the FRC and assigned voucher numbers ranging from 2422 to 2424.

Extraction of Plant Material: The pulverized leaves of Jasminum flexile were successively extracted with hexane and hydroethanol (90:10 ethanol-water mixture).

Refluxing Method: Crushed leaves (1000 g) of Jasminum flexile were extracted sequentially with hexane (1000 ml) and hydro ethanol for 6 hours. The extract was concentrated by the distillation method. The hexane extract concentrate is coded as JAFL (H), while the hydroethanolic extract is designated JAFL (HE). The yield of concentrated extracts was recorded, and the sample was stored for further investigation.

Eluates of 200ml were collected and concentrated. TLC checked the homogeneity of fractions, and similar fractions were mixed. The combined fractions were coded as main fractions MF 1 to MF 25. The chromatographic analysis led to the isolation of five compounds (JFLC1, JFL C2, JFL C3, JFL C4, and JFLC5). Chart 1 represents the outline of the procedure adopted for isolating compounds from hydroethanol extract concentrate of leaves of Jasminum flexile.

Table 1 details the solvent system used for the chromatographic separation of the main fractions and isolated compounds. 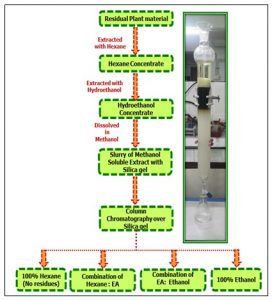 Antibacterial Activity 16: The antibacterial activity of the fractions and isolated compounds were individually tested against gram-negative and gram-positive microorganisms by agar well diffusion assay. The samples were dissolved in DMSO (dimethyl sulfoxide), sterilized, filtered using a sintered glass filter, and stored at 4°C. The microorganisms were grown overnight in Mueller-Hinton Broth at 30 ℃.

The 100 μl of bacterial suspension was spread on the surface of Mueller-Hinton agar plates containing 106 CFU ml-1 of bacteria. Twenty-five microlitres of each sample (2 mg/ml) were dropped in a 6mm well. Antibiotics ampicillin, kanamycin, and chloramphenicol (2 mg/ml) were positive controls. DMSO was used as a negative control. The plates were incubated for 24 h at 37 ℃, and the zone of inhibition was measured. The experiment was done in triplicate.

The supernatants were removed carefully after centrifuging the blood samples at 10,000 rpm for 15 min at room temperature. The red blood cells were washed in fresh normal saline (0.85% NaCl). The centrifugation and washing process was repeated until the supernatants were clear. The collected RBC suspensions were used for the anti-inflammatory assay. Various concentrations of sample and control were separately mixed with 2ml of phosphate buffer, 4 ml of hypo saline and 0.9ml of RBC suspension. All the assay mixtures were incubated at 37 ℃ for 30 min. The supernatant liquid was decanted. The haemoglobin content was spectro-photometrically estimated at 620nm. The percentage haemolysis, which is an indication of the anti-inflammatory potential of the plant extract, was calculated using the formula; 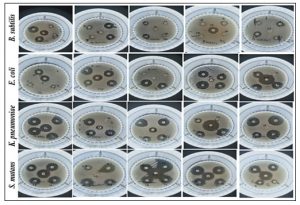 FIG. 1: PHOTOGRAPHS OF THE ZONE OF INHIBITION FOR COLUMN FRACTIONS AND COMPOUNDS OF JASMINUM FLEXILE 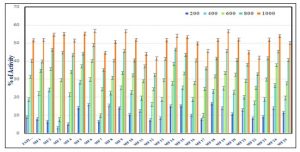 CHART 2: COMPARISON OF ANTI-INFLAMMATORY ACTIVITY OF THE FRACTIONS OBTAINED BY COLUMN CHROMATOGRAPHIC ANALYSIS OF THE LEAVES OF JASMINUM FLEXILE 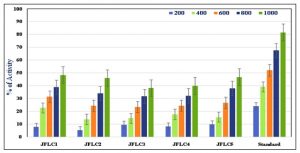 CHART 3: COMPARISON OF ANTI-INFLAMMATORY ACTIVITY OF THE COMPOUNDS ISOLATED FROM THE LEAVES OF JASMINUM FLEXILE

ACKNOWLEDGEMENT: The authors wish to thank the Avinashilingam Institute for Home Science and Higher Education for Women for providing the present research work facilities. We extend our thanks to the Arya Vaidhya Pharmacy (AVP Pvt Ltd.), Coimbatore, India, for plant material's generous contribution.

CONFLICTS OF INTEREST: The authors declare no Conflict of Interest