ABSTRACT: New pharmacologically active transition metal complexes of Co(II), Ni (II), Cu (II), and Zn(II) have been synthesized with the ligand 5-(2-(4-methoxyphenyl)-1H-benzo [d] imidazol-1-yl) quinolin-8-ol (2). Different analytical and spectroscopic tools were used to analyze the compounds, including elemental analysis, FTIR, 1H-NMR, mass spectra, electronic spectra, magnetic measurement, and molar conductance techniques. FTIR confirmed that the ligand coordinates the metal ion to form a mononuclear complex via the oxygen and nitrogen atoms of the phenolic and quinoline rings. For Co(II) and Zn(II) complexes, tetrahedral geometry is recommended, whereas square-planar geometry is proposed for Ni(II) and Cu(II) complexes. The antibacterial activity of the ligand and its metal complexes were assessed using the disc diffusion method, and minimum inhibitory concentration (MIC) was determined in the broth dilution technique. The antimicrobial activity results showed that the metal complexes were shown to be more active than the free ligand. Besides, Cu(II) complex was shown to be the most potent antioxidant using the DPPH and hydroxyl radical scavenging methods, with IC50 values of 17.3 and 21.5 μg/mL, respectively.

INTRODUCTION: In coordination chemistry, metal complexes with potentially bidentate ligands have sparked a lot of attention. Complexation of transition metals with heterocyclic ligands has played an important role in the development of

Because of their industrial and biological uses, several heterocyclic-based metal complexes have been investigated 2. Because of their diverse biological actions, benzimidazole core compounds have emerged as a popular study subject among

heterocyclic compounds in recent years 3. In medicinal chemistry and agro-chemistry, benzimidazole is a valuable scaffold 4. Several commercial fungicides based on the benzimidazole scaffold have recently been developed or released. The present study was motivated by the aforementioned facts and literature on pharmacologically active heterocyclic benzimidazole nucleus 5, 6, to develop a novel benzimidazole-based ligand and their transition metal complexes. The antimicrobial activity of the synthesized ligands and their transition metal complexes was evaluated against different bacterial and fungal species. DPPH and hydroxy free radical scavenging tests were used to assess antioxidant activity. AS a result, the current research aims to develop novel synthetic antibacterial and antioxidant agents that are more active and less harmful.

MATERIALS AND METHOD: Reactants and reagents were purchased from commercial suppliers of analytical grade. The 1H and 13C NMR spectra were recorded on Bruker Avance -400 MHz NMR instrument using TMS as an internal solvent and DMSO (d6) as a solvent. Chemical shift is given in part per million (δ- scale). Mass spectra were recorded on Perkin-Elmer LC-MS PE Sciex API/65 Spectrophotometer. Melting points were determined in one end open capillary tubes on a Buchi 530 melting point apparatus and are uncorrected. The Merck-made pre-coated TLC plates were used. Elemental analysis (C, H, and N) was undertaken with the Perkin-Elmer model 240 °C analyzer. A UV-Vis double beam spectrophotometer (Systronics 118, India) was used to record the UV-Vis spectra.A digital electronic conductivity meter was used to do the molar conductance measurements. At room temperature, magnetic measurements were made using the Gouy technique.

Antimicrobial Activity: The newly synthesized ligand and its metal complexes were tested for antibacterial activity against a range of bacteria, including Staphylococcus aureus (NCIM 5021), Bacillus subtilis (NCIM 2999) and Escherichia coli (NCIM 2574), and fungi, Candida albicans (NCIM 3471). Microbial strains were cultivated overnight at 37 °C in nutrients and potato dextrose agar medium. The antibacterial activity and minimum inhibitory concentration (MIC) of the ligand and its metal complexes were assessed using agar disc diffusion 7 and broth dilution techniques 8, respectively. The inhibitory zone was measured in millimeters for all samples evaluated in triplicate. The MIC was determined to be the lowest chemical concentration that inhibited the development of the macroscopic microorganism

DPPH Free Radical Scavenging Activity: The Blois technique 9, 10 was used to measure the ability to scavenge the stable free DPPH radical. Ligand IC50 values were determined, and their metal complexes were the sample concentration at which 50% of the DPPH radicals were scavenged. The tests were done three times, and the findings were given as mean values with standard deviations. Ascorbic acid was used as a standard drug.

Hydroxyl Radical Scavenging Assay: The standard reported method was used to determine the scavenging activity of the ligand and its Co(II), Ni(II), Cu(II), and Zn(II) complexes on hydroxyl radical activity 11, 12. Spectroscopically, the intensity of the color produced was measured at 532 nm against a reagent blank. The ligand and its metal complexes IC50 values were determined. The results were reported as mean values with standard deviations for all samples and the control. BHA was used as a reference drug.

Synthesis: The condensation reaction between 1, 2-phenylenediamine, and 4-anisaldehyde was carried out using NH4Cl in ethanol solvent at 60°C for 6 h to produce the intermediate substituted benzimidazole (1) (Scheme 1). The intermediate 2-(4-methoxyphenyl)-1H-benzo [d] imidazole (1) was then treated with 5-chloro-8-hydroxy quinoline in THF to give the required ligand 5-(2-(4-methoxyphenyl) -1H-benzo [d] imidazol-1-yl) quinolin-8-ol (2) in 92% yield. Elemental and spectroscopic analysis revealed the structure of the title compound. The newly synthesized ligand elemental and spectroscopic analysis agree well with its molecular formula.

In Scheme 2, the formation of transition metal complexes with ligand (2) in a 1:2 ratio is shown. The complexes were formed by ligand (2) reacting with metal ions, with the ligand acting as a bidentate ligand due to its oxygen and nitrogen atoms. The complexes analytical results match their molecular structures, with a molar metal to ligand ratio of 1:2. All of the complexesmolar conductance and magnetic moment were calculated and the results are shown in Tables 1 and 2, respectively. The magnetic moment data reveals that Co(II) and Cu(II) complexes are paramagnetic, whereas Ni(II) and Zn(II) complexes are diamagnetic. 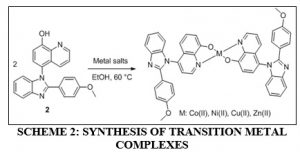 The appearance of new distinctive bands in the IR spectra of complexes verified the formation of complexes Fig. 1. The absence of OH bands in the 3307 cm-1 region shows that the complexation of the ligand with metal ions. M–N and M–O bonds are responsible for new bands at 525-543 cm-1 and 483-499 cm-1, respectively 13. The absorption maximum of the Co(II) complex was found at 638 nm Fig. 2, which corresponds to the 4A2f → 4T1p transition, confirming the tetrahedral geometry14. The absorption spectra of Ni(II) complexes revealed a band 512 nm that corresponded to the 1A1g → 1B1g transition, confirming a square planar geometry. The Cu(II) complex spectrum exhibits square planar geometry, with a peak at 645 nm corresponding to the 2B1g → 2A1g transition 15.

Antimicrobial Activity: Using the disc diffusion technique, the newly synthesized ligand and its Co(II), Ni(II), Cu(II), and Zn(II) metal complexes were tested for antibacterial and antifungal activity against S. aureus, B. subtilis and E. Coli strain in-vitro. The broth dilution technique was used to determine the minimum inhibitory concentration (MIC). Table 3. shows the antimicrobial activity of the ligand and its Co(II), Ni(II), Cu(II) and Zn(II) complexes. The antibacterial activity of metal complexes was shown to be higher than that of their ligand alone (2). Metal chelates have antibacterial action due to the lipophilic nature of the metal ions in complexes. Cu(II) complexes were shown to be more active against both bacterial and fungal strains than the other three tested complexes. Due to the protein denaturation of the sulfhydryl group, metal complexes containing copper ions enter the bacterial cell wall more easily, damaging the bacterial cell wall 16. 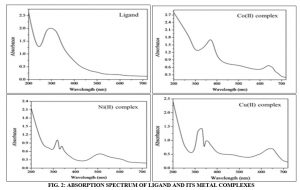 FIG. 2: ABSORPTION SPECTRUM OF LIGAND AND ITS METAL COMPLEXES

TABLE 1: IN-VITRO ANTIMICROBIAL ACTIVITY OF LIGANDS AND THEIR METAL COMPLEXES

A The values given are means of three experiments

In comparison to the norms, all of the complexes showed reduced activity (ascorbic acid and BHA). Based on the quantity of chemicals necessary for a 50% reduction in the initial DPPH radical concentration, the antioxidant activity was represented as the 50% inhibitory concentration (IC50). Cu(II) complex has substantially greater DPPH and hydroxyl radical scavenging activity than the free ligand, indicating that it is a lot better free radical scavenger and antioxidant than the ligand but lower than ascorbic acid as a reference.

TABLE 2: ANTIOXIDANT ACTIVITY OF THE LIGAND AND THEIR METAL COMPLEXES

A The values given are means of three experiments, B Ascorbic acid, c Butylatedhydroxy anisole, nt: not tested

CONCLUSION: Co(II), Ni(II), Cu(II) and Zn(II) complexes of 5-(2-(4-methoxyphenyl)-1H-benzo[d] imidazol-1-yl) quinolin-8-ol (2) were synthesized and characterized by utilizing a variety of analytical and spectroscopic techniques in this work. The antioxidant and antibacterial properties of the newly synthesized complexes were evaluated. All of the metal complexes examined showed promising antibacterial efficacy against the bacterial and fungal strains tested. Cu(II) shown substantial antibacterial activity when compared to other test compounds. Furthermore, the Cu(II) complex was discovered to have strong antioxidant activity when compared to the other examined complexes and ligand alone.

ACKNOWLEDGMENT: The authors are incredibly grateful to the Sapthagiri institute of medical science for providing microbial cultures and the Department of Biotechnology, Sapthagiri College of Engineering to carry out antimicrobial studies and UV-Vis spectrophotometer for the absorption measurements.

CONFLICTS OF INTEREST: The authors declare that they have no known competing financial interests.