ANTIMICROBIAL, CYTOTOXICITY AND ANTIOXIDANT ACTIVITIES FROM THE STEM OF RAVENIA SPECTABILIS LINDL.

ANTIMICROBIAL, CYTOTOXICITY AND ANTIOXIDANT ACTIVITIES FROM THE STEM OF RAVENIA SPECTABILIS LINDL.

Aim of this study was to determine the Antimicrobial, Cytotoxicity and Antioxidant activities of the stem of Ravenia spectabilis. For this study, the dried stem’s powder of Ravenia spectabilis was subjected to cold extraction with methanol and partitioned with n-hexane, carbon tetrachloride and chloroform. The crude methanolic extracts and its n-hexane, carbon tetrachloride, chloroform soluble partitionates, some column fractions and isolated one pure compound (g-fagarine) demonstrated mild to moderate antimicrobial activity against a wide range of Gram-positive and Gram-negative bacteria and fungi. The extractives showed significant cytotoxic activity when tested by brine shrimp lethality bioassay. In addition, the extractives also exhibited significant free radical scavenging activity when compared with the standard drug Tert- butyl-1-hydroxytoluene (BHT).

INTRODUCTION: Plants are the natural reservoir of many antimicrobial, antioxidant and anticancer or pesticidal agents. Herbal treatment is very popular because it is easily available, cheap and less toxic. Plants have been a source of medicinal agents for thousands of years and an impressive number of modern drugs have been isolated from plants sources, many of which based on their use in traditional medicine.

Plant-based antimicrobials have enormous therapeutic potential as they can serve the purpose with lesser side effects to heal many infectious diseases. Among the different plant derivetives, secondary metabolites proved to be the most important group of compounds that showed wide range of antibacterial and antifungal activity 1, 2. So, noble, emerging and re-emerging infectious diseases have become a focus for the development of new cost-effective drug in both industrialized and developing countries.

In the recent years, the development of resistance of pathogens against antibiotics has become a difficult issue caused by the indiscriminate and unconcerned use of modern antibiotics 3-9. Therefore, the demand for new and effective antimicrobial agents with broad spectrum activities from natural sources is increasing day by day.

The discovery of paclitaxel from the bark of the Pacific Yew, Taxus brevifolia Nutt. (Taxaceae), is another evidence of the success in natural product drug discovery. Various parts of Taxus brevifolia and other Taxus species (e.g., Taxus Canadensis Marshall, Taxus baccata L.) have been used by several Native American Tribes for the treatment of some non-cancerous cases 11 while Taxus baccata was reported to use in the Indian Ayurvedic medicine for the treatment of cancer. In this investigation, plants extracts and pure compound were tested to justify their existing bioactivities by the brine shrimp lethality bioassay 12.

In addition, chemical mobilization of fat stores under various conditions such as lactation, exercise, fever, infection and even fasting, can result in increased radical activity and damage. Free radicals or oxidative injury now appears the fundamental mechanism underlying a number of human neurologic and other disorders.

Oxygen free radical can initiate peroxidation of lipids, which in turn stimulates glycation of protein, inactivation of enzymes and alteration in the structure and function of collagen basement and other membranes, and play a role in the long-term complication of diabetes 13-15.

The Rutaceae family comprises of many medicinally and economically important plants. A number of Rutaceous plants have been used in medicine (e.g. Ruta, Zanthoxylum, Murraya, Glycosmis species) 21. The Rutaceae also produce a number of anticancer 22 and antitumor agent 23. Antibacterial and antifungal activity has been reported for a number of secondary metabolites from Rutaceae 24, 25.

Collection of the Plant materials: The stems of R. spectabilis were collected from Balda Garden (District-Dhaka). The plant was identified by Professor Salar Khan of Bangladesh National Herbarium (BNH), Dhaka, where a voucher specimen has been deposited (DACB Accession no. 28090). The stems were first air dried and then ground into coarse powder using a grinding machine.

Extraction of the plant: About 700 g of the powdered plant material of stem were separately soaked in 2.5 litre of methanol for 7 days. The concentrated methanol extract (10.13 g) were partitioned by the modified Kupchan partitioning procedure 27 into n-hexane, carbon tetrachloride, chloroform and aqueous soluble fractions, respectively.

Antimicrobial assay: The disc diffusion method 28 was used to test antimicrobial activity against twelve bacteria and two fungi (Table 1). The bacterial strains listed in Table 1 were collected as pure cultures from the Institute of Nutrition and Food Science (INFS), University of Dhaka, Bangladesh. The samples solution of the compounds and extracts were prepared by dissolving a definite amount of material in appropriate solvent to give the desired concentration (mg/mL) and then applied on sterile disc using micropipette (6 mm diameter, filter paper) followed by drying off the solvent in an aseptic hood.

Discs containing the test material were placed on nutrient agar medium uniformly seeded with the test microorganisms. Standard antibiotic discs (Kanamycin 30 μg disc-1) and blank discs (impregnated with solvents) were used as positive and negative control. These plates were then kept at low temperature (4 oC) for 24 hours to allow maximum diffusion. There is a gradual change of test materials concentration in the media surrounding the discs.

The plates were then incubated at 37 oC for 24 hours to allow maximum growth of the organisms. The test material having antimicrobial activity, inhibited the growth of the microorganisms and a clear, distinct zone of inhibition was visualized surrounding the medium. The antimicrobial activity of the test agent was determined by measuring the diameter of zone of inhibition expressed in millimeter. The experiment is carried out three times and the mean of the readings were taken 29.

Cytotoxicity Screening: For cytotoxicity screening, DMSO solutions of the samples were applied against Artemia salina for 24 hours in a simplified in vivo assay 12, 30. The eggs of the brine shrimp were collected from an aquarium shop (Dhaka, Bangladesh) and hatched in artificial seawater (3.8% NaCl solution) for 24 hrs to mature shrimp called nauplii. In this experiment, the test samples were dissolved in DMSO (not more than 50 μL in 5 mL solution) and by serial dilution technique, solutions of varying concentrations such as 400, 200, 100, 50, 25, 12.5, 6.25, 3.125, 1.563, 0.781 μg/mL were obtained.

A vial containing 50 μL DMSO diluted to 5 mL was used as a control. Then each of these test solutions was added to test tubes containing 10 shrimps in simulated brine water (5 mL). After 24 hrs, the median lethal concentration (LC50) of the test samples was obtained by a plot of percentage the shrimps killed against the logarithm of the sample concentration. Vincristine sulfate was used as positive control in this assay to compare the cytotoxicity of the test samples.

Antioxidant activity (DPPH assay): 1, 1-diphenyl-2-picrylhydrazyl (DPPH) was used to evaluate the free radical scavenging activity (antioxidant potential) of various test samples 31, 32. Calculated amount of test sample was measured and was dissolved in methanol to get a mother solution having a concentration of 1000 µg/mL. Serial dilution was made using the mother solution to get different concentration from 500.0 to 0.977 µg/mL. 2.0 mL of a methanol solution of the sample (control/extractives) at different concentration from 500.0 to 0.977 µg/mL were mixed with 3.0 mL of a DPPH methanol solution (20 µg/ mL). After 30 minutes reaction period at room temperature in dark place the absorbance was measured at 517 nm against methanol as blank by UV spectrophotometer.

Inhibition of free radical DPPH in percent (I %) was calculated as  (I %) = (1- Asample/Ablank) X 100, Where Ablank is the absorbance of control reaction (containing all reagents except the test material). Sample concentration providing 50% inhibition (IC50) was calculated from the graph plotted inhibition percentage against extract concentration. Tert- butyl-1-hydroxytoluene (BHT) was used as positive control.

RESULTS AND DISCUSSION: The air-dried and ground stem of R. spectabilis were macerated with methanol and partitioned with n-hexane, carbon tetrachloride and chloroform. All partitioned with crude methanolic extract, two column fractions, two VLC fractions and one pure compound were subjected to antimicrobial, cytotoxicity and antioxidant activities.

Antimicrobial activity: The crude methanol extract, n-hexane fraction, carbon tetrachloride fraction, chloroform fraction, two column fractions (F-23 and F-42), two VLC fractions (F-21 and F-22) and one pure compound (g-fagarine) were screened for antimicrobial activity. The zone of inhibition produced by the crude methanolic extract (MeOH), n-hexane, carbon tetrachloride and chloroform partitionate of methanolic extract ranged from 8-18 mm, 7-8 mm, 9-14 mm and 9-15 mm, respectively (Table 1) at the concentration of 500 mg/disc. On the other hand column fraction of F-23 and F-42 of carbon tetrachloride fraction, VLC fraction of F-21 and F-22 of chloroform fraction yielded a zone of inhibition of 7-14 mm, 7-12 mm, 7-11 mm and 7-9 mm at the concentration of 300 mg/disc, respectively (Table 1) as well as one pure compound (g-fagarine) showed a zone of inhibition of 7-9 mm at the concentration of 100 mg/disc. The n-hexane partitionate of methanolic extract showed poor activity against most of the test microorganisms. On the other hand, the crude methanolic extract showed mild to moderate inhibition of microbial growth.

Cytotoxic activity: In the present study, extracts, column fraction, VLC fraction and one pure compound (g-fagarine) were evaluated by the brine shrimp lethality bioassay using the procedure designed by Meyer et al.1982. The LC50 values of the brine shrimp assay obtained for test samples of R. spectabilies are listed in Table 2. The n-hexane partitionate of the methanolic extract showed the highest activity with LC50 value of 4.26 μg/mL. One column fraction (CF-24) of carbon tetrachloride partitionate, one VLC fraction (VF-24) of chloroform partitionate and pure compound (g-fagarine) showed moderate brine shrimp lethality and the LC50 values were found to be 7.06 μg/mL, 4.47 μg/mL and 5.02 μg/mL, respectively. The carbon tetrachloride and chloroform partitionate of the methanolic extract also exhibited significant brine shrimp lethality with LC50 values of 12.15 μg/mL and 22.19 μg/mL, respectively. This result suggest that it may contain anti-cancer, anti-tumor or pesticidal agent. 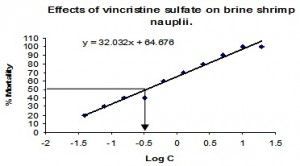 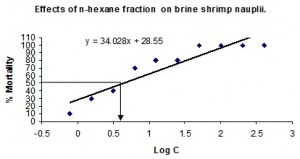 The DPPH radical contains an odd electron, which is responsible for the absorbance at 517 nm and also for visible deep purple color. When DPPH accepts an electron donated by an antioxidant compound, the DPPH is decolorized which can be quantitatively measured from the changes in absorbance. In free radical scavenging assay, IC50 value of tert- butyl-1-hydroxytoluene (standard) was found 17.69 μg/mL, whereas, the IC50 value of crude methanol extract was found to be 78.25 μg/mL. The test sample showed moderate antioxidant activity. 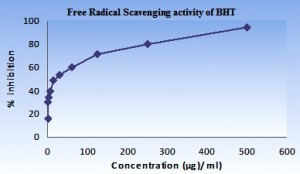 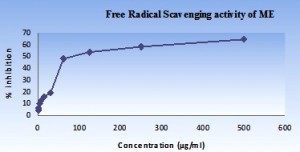 CONCLUSION: This positive results suggest that all fractions may contain potential bioactive compounds, which if properly and extensively studied, could provide many chemically interesting and biologically active drug candidates.

ACKNOWLEDGEMENTS: We would like to thank Bangladesh Council of Scientific and Industrial Research (BCSIR) for NMR studies and providing laboratory facilities.