ABSTRACT: Hemidesmus indicus Linn. R. Br. is a twining shrub traditionally used for the treatment of various diseases and ailments in the rural area of Bangladesh.  Different extracts (methanol, hexane, ethyl acetate, n-butanol and water) from the roots of this shrub tested for their antimicrobial, cytotoxicity and free radical scavenging activities. All extracts showed moderate free radical scavenging activity and SC50 values ranging from 24.98µg/mL to 93.14µg/mL, and sufficient potency for their brine shrimp lethality activity and IC50 values from 1.32µg/mL to 8.67µg/mL. The n-hexane extract showed significant antimicrobial activity against all tested organisms, with a zone inhibition ranging from 10 mm to 27 mm at the concentration of 400µg/disc. Bioassay guided fraction of the extracts has led to isolation of two triterpeniods,   3β-O-acetyl β-amyrin, lupeol 3- β -acetate and a phenolic compound,  2-hydroxy-4-methoxy benzaldehyde. The structures of the compounds were elucidated on the basis of spectroscopic methods as well as comparison with available data in the literature.

INTRODUCTION: A large number of medicinal plants are now widely used all over the world including Bangladesh for production of both traditional and modern drugs and development of new drugs. It is estimated that the current annual demand of medicinal plants in Bangladesh for the manufacture of only traditional medicines is more than one thousand metric tons. Hemidesmus indicus (Linn.) R.Br. medicinal plant is being traditionally used for the treatment of various diseases and aliments which is belongs to the Periplocaceae familylocally known as Anantamul.

H. indicus is a twining shrubby climber with small opposite lanceolate sessile leaves, small flowers in axillary cluster and tortous stout long roots, grows in the Sal forests of Dhaka and Mymensingh and also in the other places in Bangladesh 1.  It is used economically for the production of low-cost medicines locally.

Although some information is available on the traditional uses of this species in herbal medicine as well as its chemical composition. To best of our knowledge a few works has done on the roots of H.indicus that is locally available in Bangladesh.

This paper deals with the antimicrobial, cytotoxicity and free radical scavenging activities of different extracts of the roots of H. indicus and isolation and identification of compounds from this species through bioactivity guided fraction of its extract. This is with the view to validate its usage against microbial infections as well as other diseases.

Plant material: The roots of Hemidesmus indicus L. R.Br. were collected from Modhupur, Tangail, Bangladesh in December 2012. The plant was identified and confirmed by Prof. Dr. Md. Abul Hassan, Department of Botany, University of Dhaka. A voucher specimen (NO DACB36524) was prepared and deposited at Bangladesh National Herbarium (BNH).

The fresh roots were taken into laboratory and cut into small pieces and were air dried. The roots were ground to powder by a Cyclotec grinding machine. The powders were stored in air tight bottle and these were used throughout the investigation.

General experimental procedure: Melting points were measured on Stuart Scientific SMP3 melting point apparatus and were uncorrected. The IR data for all compounds were obtained from dissolved sample in methanol solvent using a Shimadzu FT-IR 8400S spectrometer. UV spectra and absorbance were performed with a Perkin Elmer Lambda 25 UV-visible spectrophotometer.

Extraction and Isolation: The dried, ground root (600g) was extracted with methanol at room temperature for three days. The extract was filtered and evaporated to dryness using a rotary evaporator under reduced pressure. The methanol extract (40g) was suspended in water and partitioned between water and n-hexane, aqueous part was further portioned between ethyl acetate and water then n-butanol and water. The amount of n-hexane, ethyl acetate, n-butanol and water extracts were found to be 1.5g, 6.8g, 10.54g and 2.8g respectively.

All extracts were tested for their DPPH, antimicrobial inhibition activities and cytotoxicity test (Table 1-3). The n-hexane extract (0.5g) was fractioned by column chromatograph over silica gel (0.063-0.2 mm), eluting with n-hexane-dichloromethane (0-100%) and then with dichloromethane-Methanol (0-15%). A total of 12 fractions (50 ml) were collected.

Free radical-scavenging activity: The free radical scavenging activity of the roots of H. indicus were assayed spectrophotometrically and these were carried out as previously described method 11. The ascorbic acid was used as a positive control. Each treatment was replicated thrice.

Antimicrobial Screening: Antimicrobial activities of all extracts (methanol, n-hexane, ethyl acetate and n-butanol) of the roots of H. indicus were carried out by the disc diffusion methods 12, 13. Five bacterial species which include two Gram-positive and three Gram-negative bacterial strains and two fungus Aspergillus niger and Aspergillus flavus were taken for the test. The bacteria were Bacillus cereus (ATCC-10876), Staphylococcus aureus (ATCC-9144), Escherichia coli (ATCC-25922), Pseudomonas aeruginosa (ATCC-27853), and Salmonella typhi (ATCC-6539). Each organism was maintained on nutrient agar slant. The samples were dissolved separately in chloroform and applied to sterile filter paper disc at a concentration of 400µg/disc. Kanamycin disc (30µg/disc) was used at standard in antibacterial and Ketoconazole disc (30µg/disc) was used at standard in antifungal study.

The sample disc, standard disc and control discs were placed gently on the previously marked zones in the agar plates pre-inoculated with test bacteria. The plates were then kept in the refrigerator at 40C for about 24 hours upside down to allow sufficient diffusion of the materials from discs to the surrounding agar medium. The plates were then inverted and kept in an incubator at 370C for 24hours.

The antimicrobial potency of the test agents was measured by their activity to prevent the growth of the microorganisms surrounding the discs which gives clear zone of inhibition expressed in mm. The experiment was carried out in triplicate and the mean values were taken. The zones of inhibition were calculated as mean ±S.D. (n=3).

For the experiment 4mg of each of the extracts was dissolved in dimethyl sulfoxide (DMSO) in vials to get stock solutions. Solutions of varying concentrations such as 400, 200, 100, 50, 25, 12.50, 6.25, 3.125, 1.563, 0.781mg/ml were obtained by serial dilution technique. The median lethal concentration LC50 of the test samples after 24 hours was obtained by a plot of percentage of the shrimps killed against the logarithm of the sample concentration. Here vincristine sulphate was used as a standard.

The n-hexane and ethyl acetate extracts of the roots of the H. indicus were repeatedly fractionated using column chromatography over silica gel and led to the isolation of three known compounds (1-3). The known compounds were identified by comparisons of their physical and spectral data with literature values as 3β-O-acetyl β-amyrin15 (1), 2-hydroxy-4-methoxy benzaldehyde16 (2), lupeol 3- β -acetate17(3) (Figure 1). 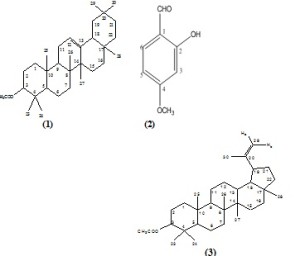 FIG 1: STRUCTURES OF THE COMPOUNDS ISOLATED FROM THE ROOTS OF H. INDICUS

Free radical-scavenging activity: The antioxidant acts either by scavenging various types of free radicals derived from oxidative processes by preventing free radical formation through reduction precursors or by chelating metals.

Antimicrobial Screening: The bacterial and fungal strains used for the experiment were collected as pure cultures from the Institute of Nutrition and Food Science (INFS), University of Dhaka. The four extracts from the roots of H. indicus  exhibited poor to significant antimicrobial activity against the test organisms.

TABLE 1: FREE RADICAL SCAVENGING ACTIVITY OF THE EXTRACTS OF THE ROOTS OF H. INDICUS

*SC50: Concentration (mg/mL) at which the inhibition % of DPPH radical scavenging activity is 50%.

TABLE 2: ANTIMICROBIAL ACTIVITY OF THE EXTRACTS OF THE ROOTS OF HEMIDESMUS INDICUS.

Brine Shrimp Lethality Bioassay: The degree of the lethality was found to be directly proportional to the concentration ranging from the lowest concentration to the highest concentration. Table 3 showed that the brine shrimp lethality testing after 24hours of exposure to the samples and the positive control, vincristine sulphate. The LC50 values obtained from the best fit line slope were given in the Table 3.

TABLE 3: CYTOTOXIC ACTIVITY OF THE EXTRACTS FROM THE ROOTS OF H. INDICUS

In comparison with the positive control, the cytotoxicity exhibited by Ethyl acetate extract shows the highest activity and the n-butanol extract was significant. Comparison with positive control, methanol and n-hexane extracts show moderate cytotoxic activity. Therefore, the positive response obtained in this assay suggests that the roots of the plant may contain antitumor, antibacterial or pesticidal compounds

CONCLUSION: The antimicrobial screening of different extracts of the roots of H. indicus was done by disc diffusion method using both gram- positive, gram-negative bacteria and fungi. From this result it can be reported that n-hexane extract has significant antimicrobial activity.

The free radical scavenging activity of five extracts of the roots of H. indicus was studied using 1, 1-diphenyl-2-picrylhydrazyl, which showed good antioxidant potency specially ethyl acetate and n-butanol extracts showed the significant efficacy. From the results of the brine shrimp lethality bioassay it reveals that the crude extracts have moderate to potent cytotoxic activity. n-Hexane and ethyl acetate extracts led to the isolation of three known compounds such as two triterpeniods (1, 3) and a phenolic compounds (2).

ACKNOWLEDGEMENTS: We authors are grateful to the authorities of BCSIR Laboratories Dhaka, Bangladesh, for assisting the research. The work was supported by Annual Development programme (ADP) project (no. 7340) from the Ministry of Science and Technology, Government of Bangladesh.