INTRODUCTION: The secondary metabolites of microorganisms and their synthetic derivatives have frequently been used as therapeutics in human and veterinary medicine. The invention of antibiotic therapy contributed greatly to the successful control of most of the epidemic Infectious diseases. Microbial products such as doxorubicin, bleomycin and mitomycin C are indispensable as cancerostatics 1. In the non-therapeutic fields of application, such as in animal husbandry and plant protection, they contributed to a high degree resulted in the continued interest in secondary metabolite production.

Natural products of biotechnological and agricultural origin play an important role as “biochemical tools” in molecular biology as well as in the investigation of cellular functions.

Actinomycetes are Gram positive bacteria that are wide spread in nature and play a pivital role in the production of bioactive metabolites 2. However the percent of discovery of new metabolites from the common and ubiquitous actinomycetes has been declined 3. Hence the search for rare actinomycetes has gained much importance in order to enhance the rate of discovery of new and potent antimicrobial agents 4. Our effort for screening of actinomycetes for new metabolites resulted in the isolation of a strain VL-RK_05 from Mango orchards of Vissannapet, Krishna dist., Andhra Pradesh which exhibited high antimicrobial potential. Therefore, in the present study, attempts are made to study the taxonomic position of the strain as well as its antimicrobial profile.

Soil samples were randomly collected at a depth of 10 cm from the Mango orchards of Vissannapet, Krishna Dist., Andhra Pradesh, India. They were brought to the laboratory in sterilized containers, air dried at room temperature to control the bacterial contamination and pre treated with CaC03 5.

Dilution plate technique was employed to isolate the Actinobacteria on Yeast extract malt extract dextrose (YMD) agar medium 6. The medium was adjusted to pH 7.0 and 0.1 mL of diluted soil sample spread on the YMD agar supplemented with 50 μg/mL Fluconozole and 50 μg/mL Rifampicin to reduce the fungal and bacterial contamination respectively and incubated at 30±2oC for 7 days. Actinobacterial colonies 7 were picked out, purified and preserved on YMD agar slants at 4 °C 8. The predominant strain was sub cultured and preserved on YMD agar slants at 4°C 9.

Morphological, Cultural, Physiological and Biochemical Characteristics of the strain:

The predominant actinobacterial strain was characterized by cultural, morphological, physiological, biochemical and molecular methods. The microscopic characterization was carried out by slide culture method 10 taking into account the nature of mycelium, color and spore arrangement 11. The morphological characteristics were assessed using scanning electron microscopy (SEM: Model- JOELJSM 5600, Japan) of 4-day old culture grown on YMD medium (YMD) at various magnifications. The strain was grown on seven International Streptomyces Project (ISP) media and four non-ISP media to observe the cultural characteristics such as color of aerial mycelium as well as substrate mycelium, pigment production and spore formation 12.

Melanin pigment production was assessed by culturing the strain on tyrosine agar (ISP-7) medium 13. Hydrolysis of starch and nitrate production 14 and H2S production were also tested 15. Physiological characteristics such as the effect of pH (5-9), temperature (20-45 °C) and salinity on the growth VL-RK_05 analyzed. The susceptibility of the strain to different antibiotics was also determined by paper disc method 16.

The genomic DNA used for the PCR was prepared from the colonies grown on YMD agar for 3 days. The total genomic DNA extracted from the strain VL-RK_05 was isolated employing the DNA purification Kit (Pure Fast® Bacterial Genomic DNA purification kit, Helini Bio molecules, India) according to the manufacturer protocol. The 16S r RNA gene fragment was amplified using Actino specific forward Primer -5'-GCCTAACACATGCAAGTCGA-3' and actino specific reverse primer - 5'-CGTATTACCGCGGCTGCTGG-3'.Conditions of the PCR were standardized with initial denaturation at 94 °C for 3 min followed by 30 cycles of amplification (Denaturation at 94 °C for 60 sec, annealing temperature of 55 °C for 60 sec and extension at 72 °C for 60 sec) and an addition of 5 min at 72 °C as final extension.

The amplification reactions were carried with a total volume of 50 µL in a Gradient PCR (Eppendorf, Germany). Each reaction mixture contained 1µL of DNA, 1 µL of 10 p mol forward 16S Actino specific primer (5´-AAATGGAGGAAGGTGGGGAT-`3), 1 µL of 10 pmol reverse 16S Actino specific primer (5´- AGGAGGTGATCCAACCGCA-`3), 25 µL of Master Mix and 22 µL of molecular grade nuclease free water. The separation was carried out at 90 Volts for 40 min in TAE buffer with 5 µL of Ethidium bromide 17. PCR product was analyzed using 1 % agarose gel and the fragment was purified (Helini Pure Fast PCR clean up kit, Helini Bio molecules, India) as per the manufacturer instructions.

The 16S rRNA gene (rDNA) sequences of the strain VL-RK_05 are registered in the GenBank database.

Growth pattern of the strain VL-RK_05:

To determine the growth pattern, the strains was inoculated into 250 ml flasks containing 100 ml YMD broth and incubated at 30 ±2 °C on a rotary shaker at 120 rpm. The flasks were harvested at 24 h interval and the growth of the strain was determined by taking the dry weight of biomass. The culture filtrates obtained after separating the biomass were extracted with ethyl acetate and antimicrobial activity of crude extract was determined by agar well diffusion method.

Extraction of metabolites and antimicrobial Assay:

The homogenous culture suspension prepared by suspending three day old culture in sterile saline was used to inoculate YMD broth (seed medium) and the culture was incubated at 30°C for 48 h on a rotator shaker at 180 rpm. Seed culture at the rate of 10 % was transferred to YMD broth (Fermentation medium). The fermentation was carried out at 30±2 °C for 120 h under agitation at 120 rpm. Antimicrobial compound was recovered from the filtrate by solvent extraction method. Ethyl acetate was added to the filtrate (1:1) and shaken vigorously.

A predominant actinobacterial strain designated as VL-RK-05 was isolated from the samples collected from Mango orchards employing dilution plate technique. The strain VL-RK_05 exhibited typical morphological characteristics of the genus Rhodococcus. Morphological and micro morphological observation of the strain revealed the presence of fragmented mycelium (Fig.1).The strain did not produce any pigment on the culture media tested. 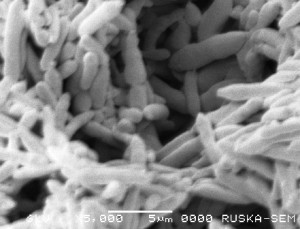 Strain VL-RK_05 exhibited positive response to catalase production and glucose fermentation but negative for nitrate reduction, ammonification, H2S production, urease activity and IMViC tests. Details of biochemical and physiological characteristics of the strain are given in Table 2.

The physiological tests are significant tools for classification and identification of Actinobacteria and influencing the growth rate of Actinobacteria 20, 21, 22. Growth of the strain VL-RK_05 occurred in the pH range of 5-9 with optimum growth at pH 7 and the range of temperature for growth was 20-40°C with the optimum being 30°C. These results are comparable with Streptomyces violaceoruber VLK-4 isolated from south coast of Andrapradesh 23. Sodium chloride tolerance of the strain was also studied as the salt concentration has a profound effect on the production of antibiotics from microorganisms.

The strain could grow well in the medium without sodium chloride as compared with medium supplemented with 1% sodium chloride. Very poor growth was formed when grown on medium with 2% sodium chloride. The strain utilized a wide range of carbon sources but the growth was good when galactose, lactose and mannitol were used. The strain grew utilizing a variety of organic and inorganic nitrogen sources. The strain was resistant to the majority of antibiotics tested and showed sensitivity to penicillin, ampicillin, vancomycin, tetracycline and ciprofloxacin.

TABLE 2: PHYSIOLOGICAL AND BIOCHEMICAL CHARACTERISTICS OF THE STRAIN VL-RK_05 ISOLATED FROM MANGO ORCHARDS:

Analysis of the 16s rDNA gene sequence of the strain VL-RK_05:

The 16S rDNA sequence data supported the assignment of this strain VL-RK-05 to the genus Rhodococcus and species erythropolis. The 602 bp partial 16S rDNA sequence of the strain VL-RK_05 was submitted to the GenBank database under an accession number JX885669. The partial sequence was aligned and compared with all the 16S rRNA gene sequence available in the GenBank database by using the multi sequence advanced BLAST comparison tool. The highest 16S rRNA sequence similarity value of 99% was obtained for the Rhodococcus erythropolis 16s rRNA (GenBank accession no JF327477).

The phylogenetic analysis of the 16S rRNA gene sequence was aligned using the CLUSTAL W programme from the MEGA 5 Version. Phylogenetic tree (Fig. 2) was constructed using MEGA software Version 5 using Maximum parsimony method. The topology of the constructed tree was evaluated by bootstrap analysis with 1000 re samplings by Maximum parsimony tool. 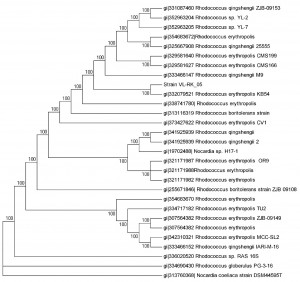 FIGURE 2: MAXIMUM PARSIMONY TREE BASED ON PARTIAL 16S r RNA GENE SEQUENCE SHOWING RELATIONSHIP BETWEEN RHODOCOCCUS STRAIN VL-RK_05 AND RELATED MEMBERS OF THE GENUS RHODOCOCCUS. THE NUMBERS AT THE NODES INDICATE THE LEVEL OF BOOTSTRAP SUPPORT BASED ON MAXIMUM PARSIMONY ANALYSIS OF 1000 RESAMPLED DATASETS; ONLY VALUES ABOVE 50% ARE GIVEN. 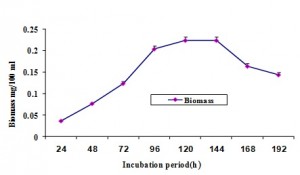 Conclusion: The present study was aimed at the isolation of novel actinobacterium Rhodococcus erythropolis VL-RK_09 having potent antimicrobial properties from Mango orchards and its identification based on cultural, physiological and biochemical characteristics. Further study on optimization, purification and chemical characterization of bioactive compounds of the strain are in progress.

AKNOWLEDGEMENTS: The authors are thankful to UGC for providing the financial assistance to carry out the research work and also to the Department of Botany and Microbiology for providing the laboratory facilities.