ANTIMICROBIAL RESISTANCE OF STAPHYLOCOCCUS AUREUS AMONG HEALTHY AND ADULT STUDENTS

ANTIMICROBIAL RESISTANCE OF STAPHYLOCOCCUS AUREUS AMONG HEALTHY AND ADULT STUDENTS

ABSTRACT: Background: Antimicrobial resistance against S.aureus infections is a global public health problem resulting in very limited treatment options, and inappropriate use of antibiotics is one of the most important factors that could affect the increasing pattern of resistance. Objective: To determine the antimicrobial resistance pattern of S. aureus among healthy and adult students to commonly used antimicrobial agents. Materials and Methods: This study was carried out at Cytogene Research and Development laboratory, Indira Nagar, Lucknow, India. Samples from throat were collected as throat-swab which were cultured and screened for S. aureus using standard microbiological protocols. The antimicrobial susceptibility of identified S. aureus was evaluated using disc diffusion technique. Results: A total of 47(54%) S. aureus were identified from 87growths of the 185throat swab samples. All the S. aureus isolates were methicillin resistant; they exhibited total resistance to penicillin, 100% to Erythromycin, 97.8%‏‏to Amoxicillin, 91.4% to Clindamycin, 78.7% to Vancomycin, 53.1% to Gentamicin, 44.6% to Trimethoprime, 19.1% to Tetracycline and 6.3% to Ciprofloxacin. Conclusion: The resistance to antibiotics agents is a global problem. Antimicrobial resistance has resulted. in increased morbidity and mortality as well as higher health care costs.

INTRODUCTION: Staphylococci are Gram-positive bacteria, with diameters of 0.5 – 1.5 μm and characterized by single cocci, which divide in more than one level to form grape-like clusters. To date, there are 45 species and eight sub-species in the genus Staphylococcus, many of which preferentially found the human body 1, however Staphylococcus aureus and Staphylococcus epidermidis are the two most characterized and studiedstrains.

The Staphylococci are non-motile, non-spore form facultative anaerobes that grow by aerobic respiration or by fermentation. They grow easily on many types of media and are active metabolically, fermenting carbohydrates and producing pigments that differ from white to deep yellow. Most species have a relative complex nutritional requirement, however, in general they requirean organic source of nitrogen, supplied by 5 to 12 essential amino acids, e.g. arginine, valine, and B Vitamins, including thiamine and nicotinamide 2, 3.

S. aureus is considered to be a major pathogen that colonises and infects both hospitalized patients with decreased immunity, and healthy immuno-competent people in the community. This bacterium is found naturally on the skin and in the nasopharynx of the human body. It can cause local infections of the skin, nose, urethra, vagina and gastrointestinal tract, most of which are minor and not life-threatening 4 to more life - threatening conditions such as pneumonia, endocarditis, septic arthritis and septicemia. However, little is known about the virulence factors behind all these conditions. 5.

Staphylococcus aureus is a major pathogen of increasing importance due to the rise in antibiotic resistance 6. It is different from the CoNS (e.g. S. epidermidis), and more harmful despite their phylogenic similarities 7, 8. The species named aureus refers to the fact that colonies (often) have a golden colour when grown on solid media, whilst CoNS form pale, translucent, white colonies 9.

Collection and Processing of Samples: The present study entitled was carried out in Cytogene Research and development laboratory, Indira Nagar, Lucknow, Uttar Pradesh, India. A total of 185 samples were collected from healthy students attending to Cytogene Research and development laboratory. From January 2016 to May 2016 at the aged range from 17-28 years from both males and females. They were registered at the laboratory and researcher herself took the sample after well explaining the objective of the study to the respondents including procedure of taking samples and personal information like: Name - Age - Gender - Address - Occupation and other relevant information. Swabs were collected aseptically using sterile cotton swab. All specimens collected were properly labeled with student’s number, date and gender. The throat swab samples were immediately cultured on 5% sheep blood agar media plates and incubated at 37 oC for 48 hours.

Isolation and Identification of the Isolates: After incubation, the colonies produced over the blood agar plates were observed for the type of hemolysis, their shape, size, color, odor, margin and elevation. The culture obtained from primary culture on 5% sheep blood agar plates showed β hemolysis, which showed pinpoint colonies. It was sub-cultured on brain heart infusion to obtain a pure growth and identification of bacteria from positive culture plates was done with the standard micobiological technique. The isolates were identified based upon the Bergys manual of systematic bacteriology, by employing the study of cultural, morphological and biochemical characteristics. The characteristics revealed in different types of media were noted while studying colonies on solid media.

Antibiotic Susceptibility Test: The Clinical Laboratory Standard Institute (CLSI) modified disc agar diffusion (Kirby Bauer|) technique was used. Select at least four to five well-isolated colonies of the same morphology type from an agar plate culture. Transfer these colonies to tube containing 4 to 5 ml of suitable broth medium and incubate the broth for 2 - 8 hrs at 35 °C. Inoculate the dry surface Mueller Hinton agar by streaking the swab over the entire agar surface repeat streaking twice rotating plate approximately 60°C each time. Place appropriate sensitivity disks on the surface 24 mm apart from center to center. invert the plates and place them at 35 - 37 °C in incubator within 15 min after applying disks, examine each plate after 16 -18 hours of incubation. Measure the diameters of zones of inhibition, including diameter of the disks, interpret the size comparing with zones of control strains and/or by referring to the table.

RESULTS: Of the 185 throat swab samples collected from students, only 87(47%) yielded significant growth. Total number of samples which were positive for S. aureus were 47(54%) (Table 1), 30 were males and 17 were females and the age group with the pathogen was 17-28 years (Table 2). The observed differences in the frequency of isolation in the gender and the various age groups were statistically significant. 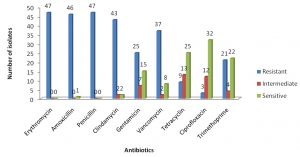 The isolation rate was higher in age group 21-22 years (31.91%) followed by the 19-20 years (27.6%) and the remaining age group isolation was minimal. These results were conducted to previous study 17. The differences in presence of S. aureus (F.Cal=17.552) in relation to different age group was statistically significant (Table 2).

Antibiotic resistance rates for gentamicin, vancomycin were moderate (53.19%, 78.72%) respectively, while S. aureus isolates showed low resistance against tetracycline, ciprofloxacin and trimethoprime (19.14%, 6.38% and 44.68%). These results for antibiotic resistance test of S.aureus were similar to previous studies 12, 19, 10. However this study is disagree with other previous studies 20. The differences between our study and other studies result are probably due to the indiscriminate empirical use of these antibiotics or may be the difference related to the number of participants, differences in the investigated groups or discrepant of techniques in the investigation of resistance to antimicrobials 7, 21.

CONCLUSION: The emergence of antibiotic resistance has been a problem day by day because of overusing antibiotics. It is needed to be aware of this problem to avoiding inappropriate use, frequent misuse, inadequate dosages, easy availability of antimicrobials and must be designed the treatment schedule after proper laboratory investigation.

ACKNOWLEDGEMENT: This work was supported by the Cytogen Research /Development laboratory and SHUATS.