ABSTRACT: Enteroaggregative Escherichia coli (EAEC) strains are causal agents of persistent diarrhea in developing countries. Enteroaggregative Escherichia coli strains (EAEC) are an emerging type of diarrheagenic E. coli. We aimed to isolate, identify and characterize the E. coli pathotypes and study their antibiotic resistance in children under five with diarrhea in Kanpur region, India. Children under 5 years suffering from acute diarrhea and attending an outpatient clinic or admitted in Rama Hospital, Kanpur were enrolled for the study. Severe diarrhea is a public health problem and is responsible for morbidity and mortality, especially in developing countries. DEC was detected by multiplex PCR. Among 38 E. coli isolates, 12 samples contain Cvd432 gene of EAEC diarrheagenic E. coli. Most of the strains are resistant to ampicillin, Co-trimoxazole, gentamicin, azithromycin, imipenem. Ciprofloxacin, Norflex and chloramphenicol are relatively more sensitive. The high antimicrobial resistance observed in our study raises a broad discussion on the indiscriminate or improper use of antimicrobials, besides the risks of self-medication.

INTRODUCTION: Diarrhea is one of the leading causes of child death in both developing and developed countries, causing an estimated 1.87 million deaths of children aged under 5 years globally each year 1. Reason for mortality and morbidity in developing countries have been increased by E. coli infection in Diarrhea 2, 3 diarrheagenic Escherichia coli being the most common cause of acute diarrhea in children 4.

The study was to isolate, identify and characterize the E. coli pathotypes and look for their antibiotic resistance in young children under five with diarrhea in Kanpur, India. Examination of stool samples from 104 children less than 5 years of age indicated that 38 (36.5%) children harbored one E. coli pathotype.

Among 38 E. coli, Enteroaggregative E. coli (EAEC) accounted for 31.57%, Antibiotic sensitivity assay in a subsample indicated that more than 50% of the E. coli isolates were resistant to Ampicillin, Gentamicin, Co-Trimoxazole, Azithromycin, Imipenem. Emerging bacterial pathogen like E. coli O157: H7 was isolated from diarrheal patients during the study through the conventional method.

In general E. coli, pathotypes were resistant to. Ampicillin, Gentamicin, Co-Trimoxazole, Azithromycin, Imipenem. The progressive increase in antibiotic resistance among enteric pathogens in developing countries is of great concern. Overuse and misuse of antibiotics in the treatment of diarrhea could lead to a rise in antibiotic resistance. The most common cause of acute diarrhea in children is E. coli. Around the world resistance of antibiotics is very common in bacterial isolates 5. Escherichia coli are found as normal flora of the human intestine 5, 6. Across the world, E. coli has shown increasing antimicrobial resistance to most antibiotics, but susceptibility pattern has varied from region to region 6-8. This investigation aimed to determine the susceptibility pattern of DEC to different conventional and commonly available antibiotics.

MATERIALS AND METHODS: Stool samples from pediatric patient less than five years were collected from January 2017 to May 2018 from the outdoor and indoor patient department of Rama Medical College and Hospital, Kanpur. Inclusion criteria were to include Stool samples from patients who had not received antibiotic treatment prior at the time of collection of samples in sterile containers and taken to the Department of Microbiology, Rama Medical College for bacterial analyses. Identification of E. coli cultures was made by morphology, cultural characteristics, biochemical reactions and Molecular characterization of DEC were done by Multiplex PCR.

Categorization of Escherichia coli was done by multiplex PCR using primers for detection of slta or elt gene for ETEC, bfpA or eaeA gene for EPEC and cvd432 gene for EAEC. The PCR was carried out in a various number of genes combinations. PCR assays were performed in a DNA thermal cycler. Each PCR was carried out comprised of preheating at 95 °C for 15 min followed by 40 cycles of denaturation at 94 °C for 1 min, annealing at 60 °C for 90 sec, elongation at 72 °C for 1-2 min and a final extension at 60 °C for 90 sec. Amplified products were run on to horizontal gel electrophoresis on 1.5% (w/v) agarose gel at 100v (50 mV) for 30 to 35 min and visualized with a Gel doc after ethidium bromide staining.

The sample was considered harmful for DEC when DNA template result was found to be negative by gel electrophoresis. Three thousand bp DNA size standards were used as a marker to measure the molecular size of the amplified products. Only the presence of the amplified product with the correct size was interpreted as a test positive. All identified DEC isolates were tested for susceptibility testing which was done by Kirby-Bauer modified disk diffusion technique 10.

The antimicrobial susceptibility assay was performed on Mueller-Hinton agar (Oxoid) by the disc diffusion method, and growth inhibition zones were interpreted according to the Clinical Laboratory Standards Institute 11. The identified DEC were tested against ampicillin (10 µg), nalidixic acid (30 µg), Gentamicin (10 µg), imipenem (10 µg), cotrimoxazole (25 µg), chloramphenicol (30 µg), azithromycin (15 µg), ciprofloxacin (5 µg), cefotaxime (10 µg), Norfloxacin (10 µg). Escherichia coli ATCC 25922 was tested along with the isolates for quality control purpose. The result was documented according to the performance range of inhibition zone of control strain.

RESULT: In this cross-sectional study, during one year, stool samples were collected from 104 patients aged 0 to 5 years, and among them 51 (49%) were males, and 53 (51%) were females. Among 104 stool samples, E. coli was isolated in 38 (36.5%). Among those E. coli isolates, 12(11.5%) were identified as EAEC DEC by Multiplex PCR. The result for antimicrobial susceptibility testing of the different groups of DEC strains is shown in Table 1. The trend of resistance was different among Diarrheagenic E. coli types. 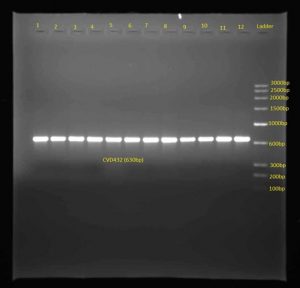 DISCUSSION: Diarrheagenic E. coli strains have been recognized as important pathogens worldwide 12. The misuse of antibiotics has been the cause of bacterial resistance to antimicrobial drugs worldwide 13. In the present study, resistance to ampicillin, cotrimoxazole, and gentamicin was shown by 100% and 75% in EAEC strains. In the present study, 11.5% EAEC were resistant to co-trimoxazole. The levels of resistance observed for trimethoprim-sulfamethoxazole could be due to widespread use in the treatment of diseases associated with Gram-negative bacteria, especially in children under two years of age with acute infectious diarrhea 14. Resistance to ciprofloxacin 8% in EAEC strains. Varying rates of resistance against ciprofloxacin could be due to the high prescription of this drug in some countries as a treatment for enteric infections caused by gram-negative bacteria 15, 16.

In the present study, the sample contained one pathogenic strain of DEC, are resistant to more than one antimicrobial drug.

The high antimicrobial resistance observed in our study could be due to indiscriminate or improper use of antimicrobials which is becoming an alarming situation in drug resistance. Clinicians can be helped by timely monitoring of drug resistance patterns of E. coli which will help them regarding therapeutic regimens to be adopted against individual cases. As the solution to the problem of resistance among diarrheagenic bacteria especially E. coli but more effective measures, such as health education and further research on the prevention of infections through quality sanitation.

CONCLUSION: This study has established that diarrhea is higher among younger children than adults and also monitors drug resistance patterns of E. coli which will give vital clues to clinicians regarding therapeutic regimens to be adopted against individual cases and will be an essential tool to devise comprehensive chemoprophylaxis. Newer antibiotics development might offer a short term solution to the problem of resistance among diarrheagenic bacteria especially E. coli but more effective measures, such as health education and further research on the prevention of infections through quality sanitation

ACKNOWLEDGEMENT: The study was conducted with the support of expert staff of the Department of Microbiology, Rama Medical College, Kanpur for their immense cooperation and assistance in the collection of specimen and processing.