Tinospora cordifolia (Fam: Menispermaceae) has been investigated for evaluation of the biological activities. The stem of Tinospora cordifolia were extracted with carbon tetrachloride, n-hexane and methanol were collected and afford 4.0 mg, 4.0 mg, and 4.0 mg, respectively for the test. The crude carbon tetrachloride, n-hexane, and methanol extract of the plant were subjected to antimicrobial screening against 15 microorganisms such as gram-positive, gram-negative, fungi by the disc diffusion method. But interestingly no fraction showed any inhibitory effect against all the microorganisms. In the brine shrimp lethality bioassay, carbon tetrachloride fraction showed high toxicity, where LC90 value was only 6.25 mg/ml.  The methanol crude extract and n-hexane fraction showed LC50 of 1.563 and 6.05 mg/ml respectively with very narrow therapeutic index (LC90 of 43.0 mg/ml and 45.0 mg/ml respectively. This indicated that the cytotoxicity exhibited by the carbon tetra chloride, n-hexane, and methanol extract was very significant.

INTRODUCTION: Plants have a great potential for producing new drugs for human benefit. Plants used in traditional medicine contain a vast array of substances that can be used to treat chronic and even infectious diseases. According to World Health Organization, more than 80% of world’s populations depend on traditional medicine for their primary health care needs.

The demand for more and more drugs from plant sources is continuously increasing. It is therefore essential for systematic evaluation of plants used in traditional medicine for various ailments. In our study, we chose Tinospora cordifolia, (Bengali name - Gulancha) which is a glabrous, succulent, climbing shrub native to India. It is also found in Burma and Sri Lanka 1, 2. Tinospora cordifolia is a large, climbing shrub. A deciduous unknown that grows to 1.0 meters (3.3 feet) high by 0.5 meters (1.65 feet) wide and prefers many types of soil ranging from acid to alkaline and partial to full sun with moderate moisture. This plant has hermaphrodite flowers 1-4. An aqueous extract of T. cordifolia decreased bronchospasm in guinea pigs, decreased capillary permeability in mice and reduced the number of disrupted mast cells in rats; a formulation containing Tinospora cordifolia markedly inhibited the suppression of chemotactic activity 5, 6 and production of interleukin-l and tumor necrosis factor induced by the carcinogen ochratoxin in mouse macrophages, further these extract of T. cordifolia showed antineoplastic activity, antiulcer activity, immunomodulatory activity, hypoglycemic activity, cholesterol-lowering activity and liver-protective activity 5-13.

In the present, experiment an attempt has been made to evaluate the antibacterial activity of different extracts (n-hexane, carbon tetrachloride and methanol crude extract) against twelve prominent gram-positive and gram-negative human pathogenic bacteria and three fungal strains. Besides, cytotoxic activity screening of the extracts was also carried out with view to assess the presence of antitumor activity of different extracts.

Plant Materials: Stem sample of Tinospora cordifolia was collected from an ayurvedic shop of Dhaka, New Market, on July 2008 and was identified by a Taxonomist of Bangladesh National Herbarium (BNH). The sample was then oven dried for 24 hours at considerably low temperature to effect grinding. The seeds were then ground into a coarse powder. The air-dried and powdered plant material (200.5 gm) was extracted with methanol. The time duration was of 21 days at room temperature with occasional shaking and stirring for each successive extraction. It was then filtered through a fresh cotton plug and finally with a Whatmann filter paper no. 1. The volume of the filtrate was then reduced using a Buchii Rotavapor at low temperature and pressure. It was then air-dried and powdered with crushing machine. Then the powdered material was successively extracted with methanol by using cold extraction process 14. The crude extract was then fractionated into n-hexane and carbon tetrachloride by using kupchan partitioning method 15.

Methods for cytotoxic study: 4.0 mg of each fraction (n-hexane, carbon tetrachloride and methanol) of Tinospora cordifolia were taken and dissolved in 200ml of pure dimethyl sulfoxide (DMSO) in two vials to get stock solutions. A series of solutions of different concentrations were prepared from the stock solution by serial dilution method and the concentrations were as; 400mg/ml, 200mg/ml, 100mg/ml, 50mg/ml, 25mg/ml, 12.5mg/ml, 6.25mg/ml, 3.125mg/ml, 1.5625mg/ml and 0.78125mg/ml. Then, the samples were subjected to brine shrimp lethality bioassay 16, 17 for cytotoxic studies. In each test tube, containing different concentrations of test sample, 10 brine shrimp nauplii (Artemia salina) were added. Two control groups were used in cytotoxicity study, to validate the test method and results obtained due to the activity of the test agent. In the study vincristine sulphate was used as the positive control. Measured amount of the vincristine sulphate was dissolved in DMSO to get an initial concentration of 20 mg/ml and serial dilutions were made using DMSO to get 10 mg/ml, 5 mg/ml, 2.5mg/ml, 1.25 mg/ml, 0.625 mg/ml, 0.3125 mg/ml, 0.15625 mg/ml, 0.078125 mg/ml and 0.0390 mg/ml of concentration. 30 ml of DMSO was added to each of three premarked glass vials containing 5 ml of simulated seawater and 10 shrimp nauplii to use as negative control groups. After 24 hours, the test tubes were observed and the numbers of survived nauplii in each test tube were counted and the results were noted. From this, the percentage of lethality of brine shrimp nauplii was calculated at each concentration for each sample.

Methods for antimicrobial assay: Collected all fractions, i.e., n-hexane, carbon tetrachloride and methanol extracts were tested for antimicrobial study by using standard disc diffusion method 18, 19. In this study, 16 microorganisms were obtained from the Institute of Nutrition and Food Sciences (INFS), University of Dhaka, Bangladesh. Standard Kanamycin (30 mg/disc) and blank sterile filter paper disc (diameter, 6 mm) were used as positive and negative controls, respectively. Nutrient agar medium (DIFCO) was used in the present study for testing the sensitivity of the organisms to the test materials and to prepare fresh cultures. The sample discs, the standard antibiotic discs and the control discs were placed gently on the previously marked zones in the agar plates, pre-inoculated with test bacteria. The discs were then incubated on the plate aerobically at 37ºC for 24 hours. The diameter of inhibition zone around each disc was measured and recorded at the end of the incubation period.

Antimicrobial study: From the study, it was amazingly found that no zones of inhibition produced by the methanol extract, n-hexane and carbon tetrachloride fractions at a concentration of 400 mg/disc in case of 12 bacterial strains and 03 fungal strains where standard doxycycline (30µg/disc) showed zone of inhibition of 43 - 52 mm (Table 1). The study was done for two times for the confirmation of no inhibitory effect.

Cytotoxic study: In the present bioactivity study, all of the extracts (n-hexane, carbon tetrachloride and methanol) showed positive results indicating that the test samples are biologically active. Plotting of log of concentration (log C) versus percent mortality (% Mortality) for all test samples showed an approximate linear correlation. From the graphs, the median lethal concentration (LC50, the concentration at which 50% mortality of brine shrimp nauplii occurred) were determined and LC90 values were also determined to establish the therapeutic index.

The methanol and n-hexane and fraction of T. cordifolia showed significant cytotoxic activity against brine shrimp nauplii and LC50 value was found to be 1.563 mg/ml and 6.05 mg/ml (Table 2, Figure 1 & 2) respectively whereas the very toxic effect was found for carbon tetrachloride fraction (LC90 = 6.25 mg/ml). To get the therapeutic index, LC90 (90% mortality) values were calculated for all fractions and the values were 43.0 mg/ml and 45.0 mg/ml (Table 2, Figure 1, 2 & 3) for methanol extract and n-hexane fraction respectively. For the conformity of the result, the test was done for two times.

An approximate linear correlation was observed when logarithm of concentration versus percentage of mortality was plotted on the graph paper and the values of LC50 and LC90 were calculated using Microsoft Excel 2007. All the values were compared with standard cytotoxic agent, vincristine sulphate who’s LC50 was found to be 0.625µg/ml. 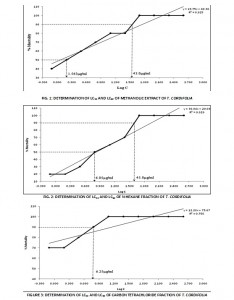 ACKNOWLEDGEMENTS: The authors are thankful to Institute of Nutrition and Food Sciences (INFS), University of Dhaka, Bangladesh for supplying the bacterial and fungal strains and Bangladesh National Herbarium (BNH) for identifying the plant.