ABSTRACT: New complexes of La (III) and Nd (III) with bidentate Schiff base ligands, 1-H indole-(2, 3-dione) hydrazinecarbothioamide (L1H), 1-H indole-(2, 3-dione) hydrazinecarboxamide (L2H) have been synthesized and characterised. The stoichiometry of the complexes is originated in the type of [Ln (L1, 2) 3].3H2O for both metals. The characterization and nature of bonding of these complexes were elucidated by elemental analysis, melting point, molecular weight determinations, electronic spectra, redox behavior, magnetic and EPR studies, IR, 1H and 13C NMR spectral studies. From an elemental analysis, the complexes are in 1:3 (metal: ligand). Whole studies propose non-electrolytic behaviour and an octahedral geometry of Ln (III) complexes. La (III) and Nd (III) metal complexes and their parent ligands tested antimicrobial potency in-vitro, and the result indicates that metal complexes are more active than parent ligands.

INTRODUCTION: It is now a truism that, in recent year chemistry of metal chelates are of a high degree of an interesting deal of consideration and most ridiculous research grounds in organo-metallic chemistry 1-5. Metal chelates of lanthanides with Schiff base ligands have extensive importance in the field of coordination chemistry 6, 7. During the previous two decades, considerable notice has been paid to the chemistry of the metal complexes of Schiff bases enclosing N and other donors atoms 8, 9 because of their stability, biological potency 10, 11. Schiff base ligands are a class of molecules that have been a wide range of biomedical applications as antibacterial 12 antifungal 13, 14, DNA cleavage 15, pesticidal and nematicidal activity 16.

Jing Xie and Shanshan Shen et al. describe the Ln (III) Schiff base complexes, which were used as antitumor drug 17. 1-H-indole-2, 3-dione and its derivatives represent a remarkable class of heterocyclic compounds that may be used in the pharmaceutical industry as a precursor for drug synthesis. Although a lot of research work has been done on the synthesis of 1-H-indole-2, 3-dione based Schiff base ligands with transition metals 18-19 butlanthanide metal complexes of these Schiff base ligands are of keen interest. So, keep all these things in mind I am very enthusiastic to synthesized lanthanide (III) metal complexes of 1-H-indole-(2, 3-dione) hydrazine-carbothioamide (L1H) and 1-H-indole-(2, 3-dione) hydrazine carboxamide (L2H).

Experimental: All chemical and solvent used in experiments are of AR grade. All the metals used are in the form of hydrated lanthanide (III) chloride (LnCl3.6H2O). The molecular weights were determined by the Rast camphor method using resublimed camphor (m.p. 178 ºC). Infrared spectra of the ligands and their metal complexes were recorded with the help of a model Nicolet Megna FTIR– 550 spectrophotometers. The spectra were recorded as KBr pellets as well in Nujol Mulls. NMR spectra were scanned on a 400 MHz Advanced III NMR, Spectrometer in deuterated dimethyl sulphoxide (DMSO-d6) using TMS as an internal standard at room temperature. EPR spectra of the complexes were monitored on the Varian E- 4X band spectrometer. Magnetic moment measure-ments were recorded at room temperature on a model 155 vibrating sample magnetometer. N, S, and Cl were estimated by Kjeldahl's method, Messenger's method and Volhard's method respectively. C and H analyses of the complexes, as well as the ligands, were performed at NFDD, Saurashtra University, Rajkot. The lanthanide metals (La and Nd) were determined as Ln2O3 complexometrically. To test the purity of the synthesized compounds, T.L.C. was employed on silica gel G using various solvents.

MATERIALS AND REAGENTS: The metal chlorides (LnCl3.6H2O) and 1-H indole-(2, 3-dione) were obtained from Alfa aesar and Sigma-Aldrich respectively and used as such and solvents employed in this study were used after distillation and immediately before use.

Preparation of Schiff Base Ligands (L1H and L2H): Ligands were prepared by the direct condensation of 1-H indole-(2, 3-dione) with hydrazinecarbothioamide (1.44 g, 16.44 mmol) or hydrazinecarboxamide (1.23 g, 16.44 mmol) respectively, in the presence of glacial acetic acid in 1:1 molar ratio in the medium of ethanol 20 (20 ml). After refluxing 3 h the contents were separated out as crystalline solids. These were dried and purified by recrystallization, from the same solvent. The synthetic route of the ligands is given in Fig. 1 and 3-D molecular structure is shown in Fig. 2.

Preparation of Solid Lanthanide (III) Complexes: For the synthesis of the metal, complexes is achieved as a calculated amount of LnCl3.6H2O (2.15 g -2.25 g, 4.67-4.83 mmol) in methanol was taken, and a requisite quantity of the sodium salts of the monofunctional bidentate ligands in the same solvent in 1:3 molar ratio was mixed to this solution. The reactions continued with the precipitation of NaCl.

The precipitate of sodium chloride obtained during the reaction was removed by strainer with the help of G-4 alkoxy funnel and the solvent was removed under reduced pressure. The product was dried in vacuum. The complexes were washed with a mixture of methanol and petroleum ether (50-50, v/v). The reactions of hydrated lanthanide chlorides with monobasic bidentate ligands have been shown by the following general equation:-

The molar conductance values of 10-3 M solutions of lanthanide metal complexes lie in the range 10–15 ohm-1 cm2 mol-1 in dry DMF indicating their non-electrolytic behaviour. The complexes were found to be monomeric as evidenced by their molecular weight determinations.

The band at 1615-1625 cm-1 in the spectra of the free ligands due to v (>C=N), is shifted to lower wave number (10–20 cm-1) in the complexes, suggesting coordination through the azomethine nitrogen atom. The bands at 1020-1035 cm-1 due to >C=S and 1680-1690 cm-1 due to >C=O are shifted towards lower frequency in the complexes, indicating coordination of sulphur and oxygen to the metal atom, respectively. The appearance of the non-ligand bands further supports the bonding of the ligands to the metals through the nitrogen, sulphur and oxygen atoms.

The coordination through the azomethine nitrogen atoms and the enolic oxygen/thiol sulphur is further substantiated by the appearance of new bands in the regions 461-474 cm-1, 526-556 cm-1 and 401-428 cm-1 in the lanthanide complexes due to v (Ln←N), v (Ln-O) and v (Ln-S) frequencies, respectively. 1H NMR and 13C NMR spectra are shown in Table 1 and 2, for ligands L1H, and L2H and their La (III) metal complexes which also conform the proposed structure. 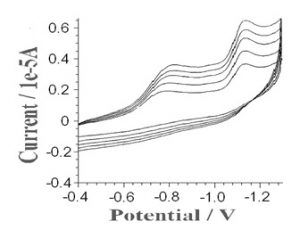 Electrochemical Study: The electrochemical behavior of [Nd (L1)3].3H2O was studied by cyclic voltammetry technique Fig. 3 on GCE. It is well known that normally lanthanides have one stable oxidation state  (+III) apart from zero but in the case of  Nd, it can additionally form an ion with oxidation state  (+II). Therefore, it is reasonable to assume that more positive peaks for neodymium are associated with III/II couple and more negative peaks for Nd are associated with the reduction to the metallic state.

The approximate value for cathodic peaks -1.16 E/V is assigned to Nd (II)/Nd (0) and -0.8 E/V is attributed to the reduction of Nd (III)/Nd (II) at GCE. From the Figure, it is clear that it gave two waves which may be assigned to the reduction of Nd (III) to Nd (0). In the reverse scan, there is no anodic peak confirming the irreversible nature of the electrode process. All these facts pointed towards the diffusion-controlled nature of the electrode process.

Magnetic and EPR Studies: Nd (III) complex is paramagnetic in nature. The magnetic moments of the complexes do not deviate much from Van Vleck's values. Non-deviation of magnetic moment values also indicate that there is no metal-metal interaction between the adjacent metal atoms either through bridging or super-exchange mechanism. The magnetic moment values agree with those reported for typical lanthanide complexes and indicate the non-involvement of 4f electrons in bonding due to their very effective shielding by the electrons in 5S25P6 orbitals. The room temperature magnetic moments (B.M.) for the Nd (III) complexes, [Nd (L1)3].3H2O, is 3.65. The EPR spectrum of the present Nd (III) complex exhibits single broadband with (g) value of 1.97 (at RT) and 2.03 at (LNT), taking the (g) value of free-ion being 2.00277. It is observed that the fine structure, as a consequence of Nd+3 zero-field splitting, is lacking, instead of broadband is obtained which indicates that the Nd+3 complex is located in a rather disordered environment caused by strain.

Electronic Spectra: The free ligands L1H and L2H exhibit an intense band at 372-392 nm and 305-320 nm which is assigned to the n-п* and п*-п* transitions, respectively. These bands have been shifted to lower energy levels in the spectra of metal complexes indicating the metal-ligand bonding. The various spectral parameters, viz., Nephelauxetic ratio (β), bonding parameter (b1/2), Sinha’s covalency parameter (% δ) and angular covalency parameter (η) have been calculated. The Sinha’s parameter (δ) is taken as a measure of covalency and was given by

where βavg is the average value of the ratio of the bonding parameter b1/2, the magnitude of which suggests the comparative involvement of the 4forbitals in metal-ligand bonding and is related to the Nephelauxetic ratio βand is given by the expression,

The β values obtained are less than one and positive values of b1/2 and δ indicate weak covalent bonding between the metal and the ligand. On the bases of the electronic spectra of the compounds, it is concluded that the present complexes have coordination number six. The electronic spectral data of the two representative complexes are given in Table 3. Based on the above spectral studies the tentative structures for lanthanide complexes have been proposed in Fig. 4. 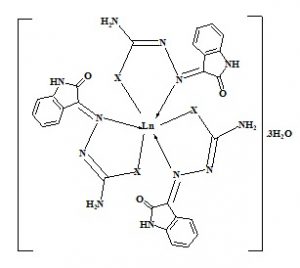 Antimicrobial Activity: The in-vitro antimicrobial activity value of the synthesized ligands and their compounds against the growth of micro-organisms is studied, which indicates that inhibition is found to increase with the increase in the concentration of ligands as well as corresponding metal complex. The results indicate that if drug administrated as complexes, exhibit greater activity against all microorganisms than ligands. This is because due to chelation, the polarity of metal complexes decreases and lipophilic nature increases which thereupon favor its penetration through the lipid coating of the cell membrane and inhibit the activity of enzymes which denatured the proteins. Such improved activity of the complexes can be explained based on the overtone concept and the tweedy chelation theory 22.

The relation between chelation and toxicity is very complex, expected to be a function of electronic, steric and pharma kinetic aspects along with mechanistic pathways. The activity is related to the nature of ligands i.e. donor site(S/O) and nature of metal 'S' donor ligand is more toxic than 'O' donor ligand. The outcome shows that as compare to S. typhi, E. coli show good potency i.e. ZOI is higher.

A comparison of potency indicates that the La (III) complex is more active than the Nd (III) complex. The MIC values of some compounds show significant activity against selected bacteria and fungi species. A comparative study of the ligand and its complexes are depicted in Graph 1. 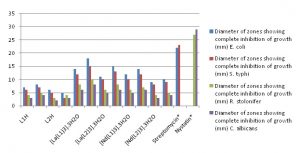 GRAPH 1: COMPARATIVE STUDY OF LIGAND AND METAL COMPLEXES AGAINST MICROORGANISM

CONCLUSION: I have described the synthesis of La (III) and Nd (III) complexes in this research article and  On the ground of the physiochemical and spectral studies, it has been clear that the ligands coordinated to the metal atoms in a monobasic bidentate manner and octahedral geometry have been given for La (III) and Nd (III) complexes. The antimicrobial studies show that Lanthanide metal complexes are more potent as compared to ligands.

ACKNOWLEDGEMENT: The Department of botany and zoology, SBP Government PG College, Dungarpur, Rajasthan, India are hereby acknowledged for their kind contribution and support for helping in the antimicrobial study.