ANTIMYCOTICS IN CERTAIN TAXA OF EUPHORBIACEAE

ANTIMYCOTICS IN CERTAIN TAXA OF EUPHORBIACEAE

ABSTRACT: There is a lot of thrust on utilization of bioactive chemicals from plant systems and their significant effect on microorganisms.  Ten species of plants of the family Euphorbiaceae have been used for our study they are, Croton bonpandianum, Euphorbia tirucalli, E. hirta, E. heterophylla,   Jatropha curcas, J. glandulifera, J. multifida, Phyllanthus amarus, Ricinus cummunis, Pedilanthus tithymaloides. Most of the family members of Euphorbiaceae have unique feature of possessing latex in their plant body. This latex is a secondary metabolite and hence has no significant physiological role in the plant system. An attempt has been made to find whether the plant extracts prepared in water have any role against fungi.  These fungi are pathogenic to both plants and animals. The stem and leaves are thoroughly washed in 1% mercuric chloride and later washed in tap water followed by   double distilled water. Later on crushed in mortar and pestle using water.  The fungal species used for our study are Aspergillus niger, Saccharomyces cerevisiae and Fusarium oxysporum.  The extracts are directly used for their antimycotic activity. Most of the plant extracts of Euphorbiaceae showed   inhibition of growth of the fungi but for few exceptions. The study envisages to find new biodegradable pesticides, presently which are necessary to control plant diseases.

Survey of  Antimycotics  in   Euphorbiaceae

As per ‘the plantlist’ web site over 3,50,699 plant species have valid names, which are existing or non existing on this earth. Among the existing plants, only 2% of plants are explored and tested for their antioxidant activity Mahuya et al 3.  In recent years, the medicinal species that reside in natural areas have received increased scientific and commercial attention, worldwide. There are as many as 50,000- 80,000 flowering plants used medicinally, IUCN species survival commission 4, Marinelli 5.

The majority of plants have antibiotic activity and also possess antioxidant free radicals. Generally the antioxidants have medicinal value because the cell damage is reduced by nullifying the effect of free radicals in the human body 3.

The plants that are investigated belong to   the family Euphorbiaceae. The Euphorbiaceae is one of the sixth largest families among the Angiosperms.  The members of the family Euphorbiaceae are laticiferous and produce many types of secondary metabolites like polycyclic triterpenes, flavonoids, curcin and cyclic heptapeptides etc. Additionally, the members possess characteristic extra floral nectarines on stem, petiole, leaf and peduncle Gopalakrishna Bhat 6.

During, the last few decades there was thrust on finding new antibiotics from plant sources. When compared  to antibacterial drugs, in antimycotics  less work has been done and hence  an attempt  to screen ten different  taxa of Euphorbiaceae against  fungi  such as; Aspergillus  niger, Saccharomyces  cerevisiae and Fusarium oxysporum  Iwu et al 7, Chopra et al 8.

The earliest record of Ethanopharmacology goes back to the period of Ayurvedic classic work like Charaka Samhita (1000 BC), who mentioned the use of 2000 herbs for the preparation of Ayurvedic medicines. Charaka Samhita along with Sushruta Samhita the most ancient and authoritative treatises of Ayurveda. Charaka Samhita and Sushruta Samhita now identified all over the world as an important early source of medical understanding and practice.  The attempt of plant extracts against plant pathogens was tried by Bhargava et al 9 have proved fungistatic effect of Ocimum cannum L.  Bhatnagar and McCormick 10 have shown the inhibitory effect of Neem leaf extracts against aflatoxin synthesis in Aspergillus parasiticus and Bhatnagar et al 11 have shown inhibition effect of Neem leaf extracts  against aflatoxin synthesis in Aspergillus flavus and A. parasiticus. Similarly Al-Abed et al 12 have studied the antifungal effects of some common wild plant species and Hoffman et al 13 screening of ten medicinal plants for antibacterial and antifungal activity.

Aspergillus: produces mycotoxin-ochratoxin, isoflavone, orobol, fumonisin B2 and aflatoxins. The species of Aspergillus causing various diseases in plants and animals are black mold in onions, peanuts and grapes. The spoilage of kernels and fruits in cashew, dates, figs and Vanilla and of root curling and crown rot in peanut is because of Aspergillus species.  Among humans it causes lung disease called aspergillosis and ear infections called otomycosis. Rangswami and Mahadevan 14 and Aggarval and Mehrotra 15.

Saccharomyces cerevisiae: Causes a disease in humans called fugemia Rangswami and Mahadevan 14 and Aggarval and Mehrotra 15.

2.2 Preparation of Plant extracts: The extracts of leaf and stem are prepared of the above mentioned plants.  The fresh stem and leaf parts are cut into small pieces washed with tap water and surface sterilized with 1% mercuric chloride and again washed thoroughly in running double distilled water for about 30 minutes to avoid any traces of mercuric chloride residues.  The plant parts are crushed in pestle and mortar, later the extract was strained through cheese cloth and collected in sterilized test tubes.  These extracts are used for our experiments against fungi like Aspergillus niger (MTCC No 1344), Saccharomyces cerevisiae (MTCC No 170) and Fusarium oxysporum (MTCC No 284) which are maintained as pure cultures in the laboratory of Microbiology.

In species of Aspergillus niger there was maximum inhibition zone of 1.85 cm diameter is observed in a plant extract of E. tirucalli and least inhibition zone of 0.25 cm is observed in in E. heterophylla, while there is no inhibiton in species of E. hirta, Jatropha curcas, J. glandulifera and Phyllanthus amarus, and of P. amarus is being used as a popular medicine for jaundice. The inhibition of Aspergillus niger and of Saccharomyces cerevisiae almost similar by plant extracts of Croton bonplandianum and Pedilanthus tithymaloides (Table 1, Fig. 1, 2).

In Fusarium oxysporum the inhibition effect on Pedilanthus tithymaloides is of 0.5 cm but in all others negative result is observed. However, there was no growth of mycelium around the plant extract pit (Table 1, Fig.1,4). 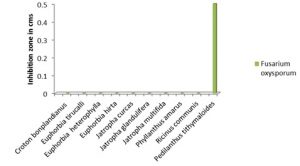 CONCLUSIONS: Most of the species of Euphorbiaceae used in this study have medicinal value. The observations have revealed that the most of the members possess antifungal activity against the species of Aspergillus niger. While the plant extracts of Euphorbia hirta and Jatropha glandulifera have not shown any kind of inhibiton in the growth of Saccharomyces cerevisiae.

Euphorbia hirta, Jatropha curcas J. glandulifera and Phyllanthus amarus showed no inhibition zone against Aspergillus niger. The maximum antifungal activity against Aspergillus niger is noted in Euphorbia tirucalli and least antifungal activity was noted in E. heterophylla. Similarly, the species of Saccharomyces cerevisiae is more susceptible to all the investigated species except Euphorbia hirta and Jatropha glandulifera.

All the test fungal species are pathogenic in both plants and animals.  These plant extracts are significantly pollution free compared to chemical pesticides used in crop plants to control pests. The extracts are natural products and are bio-degradable. More so the plant extracts are cost effective. Further, the work can be carried out to study, their chemical components and the mechanism of their inhibition effect of the fungi. This would enhance the use of biodegradable products as pesticides to prevent diseases in plant crops.

ACKNOWLEDGEMENT: The authors are thankful to Biological Science Department, Bangalore University and Indian Academy Degree College to provide an opportunity to conduct the above research.