ABSTRACT: Natural antioxidants play an important role in the prevention of many age-related diseases and promotion of health. Among natural antioxidants from plants, flavonoids and other phenolic compounds are potent antioxidants and chelating agents. Betel (Piper betle) is the leaf of a vine belonging to the family Piperaceae, which also includes pepper and kava. It is valued both as mild stimulant and appetiser. Betel leaf is mostly consumed in Asia, and elsewhere in the world by some Asian emigrants, with or without tobacco, the later is an addictive psychostimulating and euphoria-inducing formulation with adverse health effects. Betel leaf is said to have antioxidant properties. No reports are available on the antioxidant potential of the leaf extracts of common betel verities chewed in Odisha. Keeping this in view,   the antioxidant activities of leaf extracts of five selected betel varieties (Vishnupuri, Desawari, Ghajipur, Desipaan and Jaleswar) were carried out. Results revealed that the leaves have sound ROS scavenging activity. Present papers highlights the antioxidant and medicinal importances of common betel varieties, the traditional edible leaf of Odisha.

Furthermore, phenolic compounds have phenolic hydroxyl groups which can dissociate to negatively charged phenolates. Dissociated phenolics can form hydrogen and ionic bonds with various proteins, which lead to a disturbance of their 3D-structures and in consequence to a change in their bioactivity 3-4. Several reports on antioxidant activity of plant species exist even in the cultivated climbers like betel 5-6. To the best of our knowledge no effort has been made to evaluate antioxidant activity of leaves of common betel verities available in Odisha.

Therefore, in the present study, the antioxidant activities of the leaf extracts of five selected (Vishnupuri, Desawari, Ghajipur, Desipaan and Jaleswar) betel verities were evaluated. 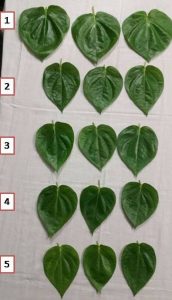 Preparation of plant extracts: Soxhlet method was adopted to obtain the plant extract 7-8. The plant parts of experimental plants were collected and dried at room temperature under shade and were powdered after drying using mechanical devices (Fig. 2b). The powdered material of the experimental plant was kept in thimble and extraction was carried out using the Soxhlet apparatus (Fig. 2c). The residues were collected and left for air drying. The extracts were stored in refrigerator for further experimental work.

FIG. 2: (a) COLLECTION (b AND c) EXTRACT PREPARATION OF BETEL VERITIES OF ODISHA

DPPH was carried out using 5.0 mL of dilutions (100µg/mL) of the experimental compounds and standard were mixed with 1 mL of a 0.001 % ethanolic solution of DPPH. DPPH solution was freshly prepared in each experiments and was stored in dark at 4± 2 °C. The compounds were incubated for 20-30 minutes in the dark at 30±2 °C. After incubation, Spectrophotometer readings were taken at 517 nm. All determination was performed in triplicate for better documentation.

Superoxide radical scavenging activity was evaluated using modified standard method. The stock solution was prepared by 3.0 mL of tris-HCL buffer containing 0.5 mL of NBT, 0.5 mL of NADH solution. 1.0 mL of compounds of 100 µg/mL concentrations was mixed with 0.5 mL of stock solution.  In the mixture 0.5 mL of PMS was added to start the reaction and incubated at 25±2 °C for 5±2 min. Readings were taken at 560 nm against ascorbic acid.

The Metal Chelating Activity of the plant extracts was determined using Gouda et al., (2013) 10. About 1ml of plant extract added to a solution of 0.5 mL ferrous chloride (0.2mM). Then about 0.2 ml. of Ferozin (5mM) was added to it and incubated at room temperature for 10 minute. The absorbency of the solution was then measured at 562 nm. The pre-formed radical monocation of 2,2'-azinobis - (3-ethylbenzothiazoline – 6 -sulfonic acid) (ABTS*+) was generated by oxidation of ABTS with potassium persulfate and was reduced in the presence of such hydrogen-donating antioxidants. The influences of both the concentration of antioxidant and duration of reaction on the inhibition of the radical cation absorption were taken into account while determining the antioxidant activity. ABTS was dissolved in deionised water and potassium sulphate was added and mixture was left overnight at room temperature. The readings were taken at 734 nm. The % inhibition was mathematically calculated and details were expressed as mean ± SD. 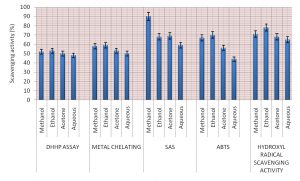 CONCLUSION: Present study revealed that Betel varieties found in the state of Odisha posses variable antioxidant properties.  Hence, the leaf extract of betel may be utilised as a source for the production of antioxidant drugs. Further research is needed to evaluate their pharmacological as well as antimicrobial potential. So that the efficacy of the betel leaf can be assessed since these leaves are the common chewing material among many in a state like Odisha.

ACKNOWLEDGEMENT: Authors are thankful to HOD, Department of Botany, Ravenshaw University, Cuttack for the support to carry out the experimental works in the Department laboratories.