ABSTRACT: The challenges of free radicals and tumour promoting agents are on the increase and this informed investigation of the antioxidant property and anticancer potential of Vernonia amygdalina, a most common medicinal vegetable in Nigeria. The leaf of Vernonia amygdalina was extracted in methanol and partitioned into hexane, ethyl acetate and aqueous layers successively. Activity guided fractionation further subjected the active ethyl acetate fraction to vacuum liquid chromatography (VLC). The antioxidant activity of the extracts was measured by the DPPH radical scavenging assay. The anticancer potential of the plant extracts was assessed by the DNA nicking assay and apoptosis induction assay. The sensitivity of the mitochondrial membrane transition pore was determined by studying the rate of change in absorbance at 540 nm under energized and de-energized conditions using Spectrum Lab UV-visible spectrophotometer. The antioxidant activity of the extracts varied considerably with respect to IC50 values. The results proved that V. amygdalina extracts had significant reduction in the formation of nicked DNA but demonstrated increased native form of DNA. The column fractions induced apoptosis in isolated rat hepatic mitochondria by increasing the mitochondrial membrane permeability pore opening. The findings showed that V. amygdalina have constituents that possess promising antioxidant and anticancer properties.

INTRODUCTION: The roles of antioxidants are to neutralize the excess of free radicals, to protect the cells against their harmful effects and to contribute to disease prevention. Free radical is an atom or molecule that bears an unpaired electron and is extremely reactive. Free radical is capable of engaging in rapid change reactions that destabilize other molecules and generate many more free radicals. In plants and animals these free radicals are deactivated by antioxidants. These antioxidants act as an inhibitor of the process of oxidation, even at relatively small concentration and thus have diverse physiological role in the body 1.

Antioxidant compounds can inhibit the oxidation chain at different stages: either by radical-chain breaking (direct radical quenching/scavenging), or by chelating metals that act as catalysts 2. Several studies have shown that plant derived antioxidant nutraceuticals do scavenge free radicals and modulate oxidative stress related degenerative diseases 3. Antioxidant constituents of plant materials act as radical scavengers, and convert the radicals to less reactive species. Natural antioxidants present in foods and other biological materials have attracted considerable interest because of their presumed safety and potential nutritional and therapeutic effects. Plant antioxidants can be used to inhibit oxidation in foods, to quench dreaded free radicals and stop oxidation chains in-vivo. So, natural antioxidants could be viewed as nature’s answer to environmental and physiological stress, hyper-tension, aging, atherosclerosis, and cancer 4.

Vernonia amygdalina Del. is a commonly called ‘‘African bitter leaf’’. The leaf has nutritional and pharmacological values in West Africa. Vernonia amygdalina has been used in Nigerian traditional medicine for the treatment of various inflammatory diseases of the skin. Its nutritional and medicinal uses and scientific studies have been articulated in two extensive reviews 5-7. Both the leaves and the roots of V. amygdalina plant are used traditionally in phytomedicine to treat fever, hiccups, kidney disease and stomach discomfort. Antihelmintic, antitumorigenic, hypoglycaemic and hypo-lipidaemic properties of this plant have also been reported 8-11. The leaves of bitter leaf are widely used for fevers and are known as a quinine-substitute. A leaf-decoction is taken as a laxative.

A purgative enema is made by macerating the leaves through a cloth and adding peppers and spices. A cough medicine is made as an expectorant. The leaves are rubbed directly onto the skin for itch, parasitic affections, and ringworm, among others 7. A number of earlier studies on the extracts of Vernonia amygdalina has been reported 12, 13. There are reports 14, 15 on the incorporation of the leaves into diet by weight which have documented the lipid modulating effect in normal adult rats. The anti-hyperlipidemic activity of extracts from the plant extract has also been demonstrated 16.

The bitter V. amygdalina is due to anti-nutritional factors such as alkaloids, saponins, tannins and glycosides 17. The present study is therefore conducted to investigate the in vitro antioxidant, DNA damage protection and apoptosis induction potential of methanol extract and fractions of Vernonia amygdalina leaf.

Plant Material: The plant leaf of Vernonia amygdalina was collected at Chelsea in Ota area, Nigeria. The plant material was authenticated by Dr. O. A. Ugbogu of Forestry Research Institute of Nigeria, Ibadan. A voucher specimen (FHI NO. 110709) was deposited in the FRIN Herbarium.

Preparation of Extract: The modified procedures previously described 18, 19 were adopted. The leaves of V. amygdalina were collected and air dried in the laboratory for 7 days. The leaves were crushed into coarse powder. The plant leaves were subjected to cold extraction using methanol as solvent. Extract was strained and filtered over anhydrous sodium sulphate and then evaporated in vacuo at 45 °C. The crude extract was partitioned into hexane, ethyl acetate and aqueous fractions successively using a separating funnel. The concentrated fractions were kept in refrigerator for further analysis.

Antioxidant Activity by Free Radical Scavenging Method: 2, 2 -diphenyl 2-picrylhydrazyl (DPPH) radical was used for the determination of the antioxidant activity of Vernonia amygdalina extract. The modified method previously described 21 was used. 1 ml of the reaction mixture contained 0.1 mL of different concentrations of the extracts and 0.9 mL of 0.1mM DPPH solution in methanol. Reaction mixture without the extract was used as control. The mixture was shaken vigorously and allowed to stand in dark for 30 min. The antioxidant scavenging activity was measured as the decrease in absorbance of DPPH at 517 nm against a blank and compared with ascorbic acid as standard. The scavenging ability of the extract was calculated using the following equation:

DNA Nicking Assay: The ability of the extracts to protect rat liver DNA from devastating effects of hydroxyl radicals generated by Fenton’s reagent was assessed by the DNA Nicking assay described 22 in 2002. The reaction mixture contained 5 μl of 100 µg/µL DNA. 10 μl   Fenton’s reagent (30 mM H2O2, 50 mM ascorbic acid and 80 mM FeCl3) followed by the addition of extracts and the final volume of the mixture was brought up to 20 μl using distilled water. The mixture was then incubated for 30 min at 37 °C and the DNA was analyzed on 1 % agarose gel (prepared by dissolving 1 g of agarose in 100 ml of 1X Tris acetate EDTA buffer) followed by ethidium bromide staining. The electrophoresis was run in 1X Tris acetate buffer at 100V for 1 hour and the gel image was captured in the UV gel documentation system, UVP.

Isolation of Rat Liver Mitochondria: Low ionic strength mitochondria were isolated according to the previously described and modified method 23, 24. Excised livers from Wister rats were minced in ice cold homogenization buffer pH 7.4 (210 mM mannitol, 70 mM sucrose, 5 mM hepes-KOH and 1 mM EGTA) and centrifuged twice at 1,000 g for 5 minutes at 4 °C to remove cell debris and the nuclear fraction. Mitochondria were isolated by subjecting the supernatant to centrifugation at 10.000 g for 10 minutes at 4 °C. The pellet obtained was re-suspended in the isolation buffer (210 mM mannitol, 70 mM sucrose, 5 mM hepes-KOH, BSA, pH 7.4) and then centrifuged at 10,000 g for 10 minutes. This was done twice to eliminate extraneous debris.

The mitochondria were immediately suspended in a solution of ice cold MSH buffer (210 mM mannitol, 70 mM sucrose, 5 mM hepes-KOH pH 7.4) then dispensed in Eppendorf tubes as aliquots and placed on ice. Fresh mitochondria were used for each experiment. Protein concentration was determined according to the method of Lowry 25, using bovine serum albumin (BSA) as standard.

Mitochondria Swelling Assay: The sensitivity of the mitochondrial membrane transition pore (swelling) was determined by studying the rate of change in absorbance at 540 nm under energized and de-energized conditions using SpectrumLab UV-Visible spectrophotometer. Mitochondria (0.4 mg/ml) in MSH buffer were preincubated in the presence of 0.8 M Rotenone and were energized with 5 mM sodium succinate to support swelling using Ca2+ and spermine as positive and negative control, respectively 26.

DPPH Free Radical Scavenging Activity: The free radical scavenging activities of VF column fractions were performed using the DPPH assay. The effect of antioxidants on DPPH radical scavenging has been indicated 27 to be due to their hydrogen-donating ability. The DPPH scavenging activities of the test fractions is a measure of their antioxidant potential. The reduction capability of DPPH radical was determined by the decrease in absorbance at 517nm induced by antioxidants. Ascorbic acid was used here as reference standard. The extracts were able to reduce the stable radical DPPH to the yellow-coloured di-phenylpicryl hydrazine. The IC50 values (concentration of sample required to scavenge 50 % free radical were calculated from regression equation. Regression equations were prepared from the concentrations of the extracts and percentage inhibition of free radical formation). Ascorbic acid showed the highest activity with IC50 value of 0.1395 mg/ml.

In vitro DNA Damage Protection Assay: The protective effect of extracts on oxidative DNA strand breakage was evaluated by the DNA Nicking assay. The oxidative modification of DNA has been suggested 28 to contribute to aging and various diseases including cancer and chronic inflammation.

Fig. 2 showed band no. 8, the rat liver DNA in its main native form (+ve control).  The band no. 1 is the DNA in nicked form (rat liver DNA plus Fenton’s reagent, the -ve control). The Band nos. 2 to 7 are DNAs plus Fenton’s reagent and extracts, where nicking was caused by hydroxyl radicals. Inhibitory effect of VF extracts on DNA nicking caused by hydroxyl radicals was seen with different fractions of VF crude extract. In presence of Fenton’s reagent, there was a significant increase in the formation of nicked DNA. The native form of DNA decreased and converted into nicked DNA. Addition of extract significantly inhibited the formation of nicked DNA form. The results revealed that the crude methanol extract (No.7) and ethyl acetate fraction (No. 6) at 5 µg level were potent in preventing the oxidative damage than other fractions which had their DNAs fragmented compared to positive control. The results indicated the V. amygdalina leaf to possess significant inhibition against the formation of nicked DNA. The DNA protective activity of the two extracts (Fig. 2) indicated the anticancer potential of Vernonia amygdalina leaf. 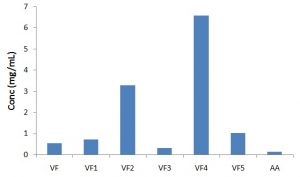 Mitochondria Membrane Permeability Pore Opening: This study illustrates (Fig. 3) the activities of the test extracts (ethyl acetate extract and column fractions of V. amygdalina leaf) on isolated rat hepatic mitochondria and the rate of inducing apoptosis was determined by the level of increased mitochondria membrane permeability pore opening in relation with the change of absorbance at 540 nm. The results obtained showed that calcium ions induced the opening of MPT pore significantly on rat liver mitochondria. The results further revealed the inhibitory effects of different fractions (VF, VF1, VF2, VF3, VF4 and VF5) at concentration of 50.51 µg/µL. Specifically, the data demonstrated that VF (ethyl acetate extract), VF2 (Hex/EtOAC 70:30) and VF3 (Hex/EtOAC 50:50) reversed calcium-induced opening of MPT pore significantly compared to other test fractions (Fig. 3). This indicates that the medicinal plant V. amygdalina induced MPT pore opening of intact mitochondria suggesting the presence of certain principles in the crude ethyl acetate extract that are capable of altering the integrity of the mitochondrial membrane. 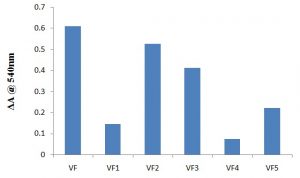 So, the ability of the fractions of V. amygdalina to induce MPT pore opening on a rat liver mitochondria suggests that the ethyl acetate-soluble extractive of the plant leaf has constituents potent in inducing MPT opening with eventual release of apoptotic proteins which may lead to cell death. This indicates the anticancer property of V. amygdalina.

ACKNOWLEDGEMENT: The authors are thankful to the management of Covenant University, Ota, Nigeria for publication support.