ABSTRACT: To provide a scientific basis to traditional uses of seeds of Anethum graveolens, seed extract was evaluated for its antioxidative potential. Firstly, indeed, aqueous extract of Anethum graveolens was prepared and analyzed for the phytochemical compounds contents. Furthermore, antioxidant activity was assessed using the Total Antioxidant Capacity (TAC) methods: 2.2’Azinobis (3-ethylbenzthiazoline-6-sulfonic acid (ABTS. +), 2, 2-Diphenyl-1-picrylhydrazyl (DPPH.+), Ferric reducing antioxidant power (FRAP) and also the Hydroxyl Radical Scavenging Activity (HRSA) assays. The total phenolic, catechins and tannins contents of this extract were also assessed. Finally, the protection effect on DNA damage was evaluated. Results obtained by all of the radical scavenging activity methods used showed higher antioxidant activity. Also, the results indicate that the extracts of A. graveolens showed stronger hydroxyl radical scavenging activity with an inhibition percentage of 43.56 %. However, results obtained showed that the extract was not providing a protective effect upon DNA fragmentation by the method used.

INTRODUCTION: Oxidative stress generated particularly by excessive quantity of reactive oxygen nitrogen species (RONSs) is considered to be a primary factor in diseases such as diabetes, cancer, rheumatoid arthritis, and atherosclerosis as well as in degenerative processes of aging 1.

Antioxidant molecules can  reduce  the oxidative  stress  by  breaking  the  oxidative  chain  reaction,  and  protect  the  body  from  oxidative  damage.

However, some commonly used synthetic antioxidants, such as BHA (E320) and BHT (E321), can cause nasty side effects. Nowadays, the need for new, safe and effective antioxidants and other bioactive compounds is the major challenge to the pharmaceutical, cosmetic and food industry, especially from natural source like a plant 2.

The genus name Anethum is derived from Greek word aneeson or aneeton, which means strong smelling. Its common use in Ayurvedic medicine is in abdominal discomfort, colic and for promoting digestion. Moroccan population used this plant to cure bloating, diarrhea in children and as food additive 3.

Several experimental data have been undertaken in diverse in vitro and in vivo models. Some pharmacological potential of Anethum graveolens leaves; flower and seed have been reported such as antimicrobial, effect on gastric irritation and antihyperlipidemic activities 4-7. Thus, to provide a scientific justification for the traditional used, the aims of this study was to investigate the antioxidant potential of the aqueous extract of A. graveolens seed using four method based on the radical scavenging activity and the method evaluating the protective effect upon DNA fragmentation. Phytochemical screening was carried out to identify major biologically active phytochemical compounds.

Anethum graveolens specie was harvested in the south-east region of Morocco (Rissani-Errachidia) identified and deposited in the herbarium of the National Institute of Medicinal and Aromatic Plants (NIMAP) Taounate-Morocco.

Seed of Anethum graveolens were grinded and brought to boiling under reflux in distilled water for 30 minutes. The crude extract was filtered off, concentrated using a rotary evaporator and recovered with a yield of 12.79%.

The total phenolic contents of aqueous extract was determined using Folin-Ciocalteu’s reagent, the gallic acid was used as standard 8. Result was expressed as gallic acid equivalent (mg gallic acid/g of extract). Using the method proposed by 9, method that is based on the ability of catechins condensation with carbonyl compounds in acidic media. The result of the reaction is measured at 500 nm. The total tannins content was determined by spectrophotometer according protocol described by 10.

2.2’Azinobis(3-ethylbenzthiazoline – 6 - sulfonic acid (ABTS.+) Method: This assay is based on decolorization that occurs when the radical cation ABTS.+ is reduced to ABTS’ 11, 12. The radical was generated by reaction of a 7 mM solution of ABTS in water with 2.45 mM K2O8S2 (1:1 v/v). The mixture was held in darkness at room temperature for 16h, as this is the time needed to obtain stable absorbance value at 734 nm. The assay was made up with 980 µl of ABTS. + and 20 µl of the sample. Absorbance was measured after 15 minutes 12. The results were expressed in IC50 and on equivalent millimolar Trolox, using the relevant calibration curve.

2, 2 - Diphenyl - 1- picrylhydrazyl (DPPH.+) Method: This method is based on the reduction of the free radical DPPH. 12, 13. This leads to its decolorization. The presence of the antioxidant leads to a loss of color in the reactive in methanol at a concentration of 5.07 M. At this concentration, the solution immediately reaches an absorbance value of around 0.7 at 517 nm. The reaction takes place when 980 µl of DPPH. (5.07 M) was mixed with 20 µl of the sample. A reaction time of 2h is calculated at room temperature, which is the time needed to arrive at a stable reading of the reactive with the sample. Results were expressed in millimolar Trolox using the dose-response curve described by this substance.

Ferric reducing antioxidant power (FRAP.) Method: This method is used to measure the reductive power of a sample 12, 14. It is based on increase of absorbance at 593 nm due to formation of tripyridyl-S-triazine (TPTZ) complexe with ferric (II) [TPTZ-Fe(II)] in the presence of a reductive agent. The reactive mixture is prepared by mixing 25 ml of 0.3 M sodium acetate buffer solution at pH 3.6, 2.5 ml of TPTZ (10 mM), 2.5 ml of FeCl3 (20 mM), and 3 ml of water. Thirty microliters of the sample was added to 970 µl of the latter reactive mixture and was incubated at 37°C for 30 min. the results were expressed as millimoles of Fe (II), using linear calibration obtained with different concentration of FeSO4.

Assay for effects on deoxyribose (Hydroxyl Radical Scavenging Activity, HRSA): Deoxyribose (2-deoxy-D-ribose) decays when exposed to hydroxyl radicals generated by the Fenton reaction 15. The hydroxyl radicals (OH.) were generated through the following system: 10 µl of FeCl3 (0.1 mM), 10 µl of ascorbic acid (0.1 mM), 10 µl of H2O2 (1mM) and 10 µl of EDTA (0.1 mM). 20 µl of the sample were incubated at 37°C for 1 h, with 10 µl of deoxyribose (1 mM) in the presence of FeCl3, ascorbic acid, H2O2, and EDTA. The mixture was incubated for 15 minutes at 100°C. After which it was left to cool to room temperature. The malondialdehyde formed from the decay of the deoxyribose was evaluated in reaction with TBA and measured at 532 nm 15. The result was expressed as an inhibition (%) in relation to a negative control.

Assay for effects on DNA:

Pig-thymus DNA (200 µg) in absence and presence of 100 µl of sample was exposed to the action of hydroxyl radicals generated by the mixture of 100 µl of ascorbic acid (1 mM) and 10 µl of copper sulfate(II) (100 µM). The mixture was incubated at 37°C for 1 h after which the fragments were separated by electrophoresis.

The in vitro assay based on ABTS+ radical scavenging capacity, was used to evaluate antioxidant effect of A. graveolens seed extract. In Fig. 1 the variation of the percentage of antioxidant effect in function of the concentration of A. graveolens seed extract was represented. The curve shows stronger scavenging capacity with an IC 50 of 2.68 mg/ml wish is equivalent to 0.89 mM of Trolox. 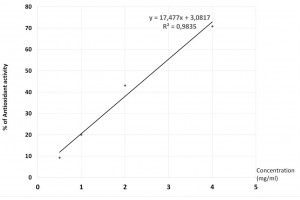 The A. graveolens seed extract was also screening for its scavenging activity using DPPH radical dot assay. This assay is routinely practiced for assessment of free radical scavenging potential of an antioxidant compounds and considered as one of the standard and easy colorimetric methods for the evaluation of antioxidant properties. Results were expressed on mM of Trolox. Standard curve of Trolox was performed [(mM Trolox = 1.6903*(A0-As)-0.0056) with A0: absorbance of DPPH (without extract) and As: absorbance of sample (extract)]. The concentration of 8 mg/ml of the extract was equivalent to 0.85 mM of Trolox. The standard used (Trolox) shows an IC 50 of 0.59 mM.

The reduction of [TPTZ-Fe (III)] complex to the Fe (II) form, by an antioxidant under acidic conditions, develops an intense blue color with an absorption maximum at 593 nm. The antioxidant effect can be evaluated by monitoring spectrophotomecally the formation of a [TPTZ-Fe (II)] complex. The extract of A. graveolens seed with a concentration of 8 mg/ml shows higher antioxidant effect which is equivalent to 0.34 mM Fe (II).  This result was determined by the curve of Fe (II); [(mM. Fe (II) = 1.4744x +0.0304) with x: difference between absorbance of sample and control].

The abilitie of the A. graveolens extract to scavenger hydroxyl radical mediated deoxyribose degradation in a Fe3+ EDTA ascorbic acid and H2O2 reaction mixture was evaluated. Hydroxyl radicals are the major active oxygen species causing lipid peroxidation and enormous biological damage. In this study this radical was produced by incubating ferric-EDTA with ascorbic acid and H2O2 at pH 7.4 and reacted with 2-deoxy-2-ribose. A pink chromogen was formed upon heating with TBA at low pH because of the presence of the malondialdehyde (MDA)-like product generated. The reaction is prevented by the extract that removes the hydroxyl radicals from the sugar. The results indicate that the extracts of A. graveolens showed stronger hydroxyl radical scavenging activity with an inhibition percentage of 43.56 %.

The agarose gel electrophoresis was presented in Fig.2. The greater mobility-distance from the well to the zone of greatest density is directly proportional to the damage to DNA and inversely proportional to the size of the fragments that are obtained12. Based on this hypothesis, the DNA exposed to the extract of A. graveolens (lane 4) was fragmented. The level of migration of dense fragments of DNA exceeded DNA exposed to Cu (II) and ascorbic acid (lane 2). In other words, the results showed that the treatment by A. graveolens extract had no effect upon DNA fragmentation.

In our study the antioxidant activity of aqueous extract obtained from seed of Anethum graveolens was evaluated by the methods based on testing radical scavenging effect and method evaluating the effect upon DNA fragmentation.

The antioxidant activity of A. graveolens seed extract may be due to terpenoids like limonene, carvone and phenolic compounds like dill apiole and anethole 4. Furthermore, hydrolysis and other cleavage processes can release such compounds. Moreover, heat- and water-induced chemical reactions can also change the activity of a complex extract system 4, 5 showed the presence of many phytochemical compounds in the seed extract of A. graveolens like flavonoids, tannins, alkaloids, saponins and cardiac glycosides. Numerous published studies described significant and positive correlations between total phenolic content and the antioxidant activity 17. However, 12 explain that antioxidant activity depends more on structure and conformation of total phenolic compounds than their concentration.

Nonetheless, effect upon DNA fragmentation assay shows that extract was not provide a protective effect. However, 12 explain that this methodology is valid even if we accept that greater mobility-distance from well to the zone of greatest density is directly proportional to the damage to DNA and inversely proportional to the size of fragments that are obtained.

In conclusion the result of this study has shown that aqueous extract of A. graveolens seed provide stronger scavenging effect tested by the ABTS, DPPH, FRAP and HRSA methods using Trolox as a standard. The antioxidant activity was explain by the total phenolics, tannins and catechins contents and other compounds previously reported. However, this extract showed no protective effect on DNA damage. Finally, this study may be considered as report on the antioxidant propertie of aqueous seed extract from A. graveolens. The results of this study have provided a starting point for the investigations to exploit new natural substances present in the seed of A. graveolens as alternative to synthetics antioxidants.

ACKNOWLEDGMENT: This work is supported by FP-7 INCO- MAP2ERA and FP7- EMAP. We are grateful to Professor Abdessalam El Khanchoufi (from LPAMSN, National Institute of Medicinal and Aromatic Plants), Rivero-Pérez MD and Gonzalez-Sanjosé ML (from Department of Biotechnology and Food Science, University of Burgos, Spain).