INTRODUCTION: The composition of honey is complex, but is primarily a highly concentrated mixture of sugar in a syrupy solution. Honey is known to be rich in antioxidants. Antioxidants present in honey include both enzymatic, such as catalase, glucose oxidase, peroxidase and non- enzymatic substances such as ascorbic acid, α-tocopherol, carotenoids, amino acids, proteins, organic acids, Maillard reaction products, and more than 150 polyphenolic compounds  containing flavonoids, flavonols, phenolic acids, catechins, cinamic acid derivatives, etc 1-6. Generally, higher antioxidant activity is found in darker honey samples 7, and variations in the antioxidant activity of honeys are due to the quantitative and qualitative nature of the phenolic contents 8. The physicochemical and bioactive properties of different floral origin honeys from Romania were reported 9. The antioxidant activity of Portuguese honey samples and the different contributions of the entire honey and phenolic extract has also been reported 1.

The antioxidant activities and total phenolics of different types of honey from Yemen were also determined 3.  The antioxidant capacity and phenolic content of stingless bee honey from Amazon Brazil, in comparison to Apis bee honey was evaluated 10. Also, the radical scavenging activity of different floral origin honey and beebread phenolic extracts in Lithuania has been reported 11. Phenolic compounds in manuka honey were identified as specific superoxide anion radical scavenger using ESR and liquid chromatography with coulometric array detection 12. Recent studies have determined the effect of L- ascorbic acid content on the total antioxidant activity of bee honey 13. Also, the antioxidant flavonoids in Sudanese honey samples was determined by solid phase extraction and high performance liquid chromatography 14. Honey is consumed in virtually every part of the world, and its quality is affected by factors such as geographical location, seasonal and processing conditions, floral sources and storage conditions 9, 15, 16.

Honey has been used in ethnomedicine, and in recent times, for the treatment of burns, gastrointestinal disorders, arthritis, infected and chronic wounds, skin ulcers, cataracts, eye ailments, etc 1, 17-19. It has been reported that the substitution of honey in some foods for traditional sweeteners could result in an enhanced antioxidant defense system in healthy adults20. In Nigeria, honey is used as a sweetener or preservative in food and for the treatment of a variety of diseases. It is expected that honey properties from different sources and locations are different. Accordingly, in this work, the antioxidant properties of honey samples from the northern savannah region and southern rainforest ecosystems of Nigeria were evaluated and a correlation between them sought.

Samples: Twelve honey samples from the northern savannah and tropical rainforest ecosystem were harvested directly from beekeepers. Upon receipt, all samples were stored at 4oC in the dark and used within one month.

Reagents and Standards: All solvents were of analytical grade: methanol, petroleum ether (60­­-80oC) was obtained from BDH. Gallic acid, BHA (butylated hydroxy anisole), ferrozine, DPPH (2, 2 – diphenyl – 1- picrylhydrazyl) were purchased from Sigma Aldrich. Quercetin was obtained from Alfa Aesar. Folin - Ciocalteau reagent was purchased from Fluka. All other chemicals were gotten from BDH. Water was treated in a water purification system.

Physicochemical Analysis: The moisture, color and ash content of the various honey samples were determined using standard methods as adopted by the International Honey Commission 21.

Estimation of Total Phenolic Compounds: For the determination of total phenolic compound, a modified method of Singleton and Rossi22 for honey was used. Briefly, 5.0g of honey was treated with 50ml of distilled water, mixed and filtered through a qualitative filter. 500μl of this solution was mixed with 2.5ml Folin – Ciocalteau reagent (0.2N) for 5 min and then 2ml of Na2CO3 solution (75g/l) was added. The samples were incubated at room temperature in the dark for 2 hrs and the absorbance of the samples measured at 760nm. For the blank solution, methanol was used in place of honey and for the calibration curve; a stock solution of gallic acid (1mg/ml) was prepared for further dilution. The linearity obtained was R2 = 0.9911.(Y= 0.0016x + 0.0413). Results were expressed as mg gallic acid equivalent (GAE) per 100g of sample.

DPPH Radical Scavenging Assay: 1ml of varying concentration of honey solutions was mixed with1ml of 0.004% methanol solution of DPPH. The mixture was shaken vigorously and allowed to stand for   30 min at room temperature in the dark.  The reduction of the DPPH radical was determined by measuring the absorption at 517nm. The procedure was repeated for the blank and control. The radical scavenging activity was calculated using the equation:

Evaluation of Metal Chelating Activity: Metal chelating activity was determined according to the method of Decker and Welch24 with some modifications. Briefly 0.5ml of honey solution was mixed with 0.05ml of 2mMFeCl2 and 0.1ml of 5mM ferrozine. The total volume was diluted with 2ml methanol. Then, the mixture was shaken vigorously and left standing at room temperature for 10mins. After the mixture had reached equilibrium, the absorbance of the solution was measured spectrophotometrically at 562nm. The percentage of inhibition of ferrozine – Fe2+ complex formation was calculated using the formula:

Statistical Analysis: All assays were carried out in triplicate. The results were expressed as means + SD.  One way analysis of variance (ANOVA) was done using SPSS 14 package.

RESULTS AND DISCUSSION: The chemical composition of honey and its biological activity depends on the plant from which it is collected and also on the macro and microclimatic conditions. Selected physicochemical parameters as well as the type, location, family, scientific, common and local names of the plant that form the basic flora of the honey  samples are given in Table 1. The average moisture content of honey from both ecosystems had a range of 13.17+0.08% - 18.32+0.17%. With respect to each ecosystem, moisture content varied in the order: S4>S3>S5=S6>S1>S2 and S7=S11>S8>S12>S10>S9 for honey samples from the northern and rainforest ecosystems respectively.

Values between 15.40% and 20.00% were reported for different floral origin honeys from Romania 3, while reports for Anotolian monofloral honey indicated characteristic values between 19.00% and 19.70% 25. However, our values were within limits prescribed by Codex Alimentarious Commission 26. Water content is a good criterion to establish the quality of honey as a higher content can produce fermentation during storage. Ash content was generally low, except for cashew honey (S4) and orange honey (S11) which exceeded the 0.6% ash content limits. These variations may be attributed to factors such as differences in soil and atmospheric conditions as well as the type and physiology of each plant that form the flora of honeybees 27.

Total phenolic content of honey samples varied widely (Fig. 1), with orange honey (S7) having the highest content (82.34mgGAE/100g) and the least in bush mango honey (S2) (23.92mgGAE/100g). For each ecosystem, the mean phenolic content was higher in the southern rainforest (51.63mgGAE/100g) than the northern savannah zone (47.42mgGAE/100g). This variation may be attributed to the higher phenolic accumulating potential of honey samples harvested from the southern rainforest zone.  Lower total phenolics content of 0.75 to 2.85mg/100g GAE was reported for honey sold in Owo community, Ondo State, Nigeria 28.

However, our values are in agreement with reports for Portuguese honey 1. Flavonoid content, expressed as mgQE/100g sample (Fig. 1) ranged between 2.52 – 27.21mgQE/100g for samples from the northern savannah and 9.17 – 22.38mgQE/100g for samples from the southern rainforest zone. Highest flavonoids content was found in lime honey (S3) and orange honey (S7) and very low content in bush mango honey (S2).Similar values of 0.91 – 28.25mgQE/100g was reported for different floral origin honey from Romania 3, while lower Flavonoid content of 1.79mg/100g was reported for Australian sunflower (Helianthus annus) and 4.50mg/100g in European acacia (Robina pseudoacacia) 11. 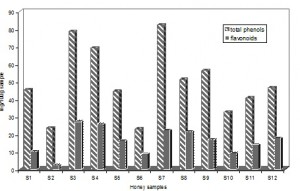 FIG. 1: CONTENTS OF TOTAL PHENOLS AND FLAVONOIDS IN HONEY SAMPLES

The Flavonoid content in Lithuanian honey was reported as 281.5+30.8μg/100g for spring honey and 3019.2+18.19μg/100g for summer honey 29. These variations may be attributed to differences in weather condition, source of pollen and plant- origin bioactive components transferred. Typical phenolics that possess antioxidant activity have been characterized as phenolic acids and flavonoids 30, which have been implicated as natural antioxidants, and honey has been shown to contain such phenolic acids/ flavonoids, examples of which include p-coumaric acid, kaempferol, gallic acid, apigenin, quercetin, α-tocopherols, β- carotenes, etc.

Metal chelating activity of honey samples was very low (<10%) (Fig. 2) compared to the control, EDTA (93.76%), indicating that honey collected from both zones are weak metal ion chelators. However, moderate to high chelating properties was reported for propolis extract obtained from honey bees31. It has also been shown that guava had potential radical scavenging property, but its function as secondary antioxidant measured by its chelating power was rather low 32.   Thus, it can be said that the studied honey samples, though rich in phenolics, was very low in active compounds that might bind to metal ions strongly.  BHA and BHT have been reported to show no metal chelating activity 33. 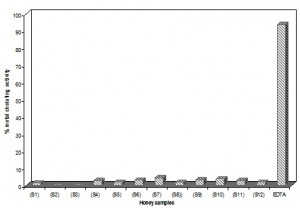 The ability to scavenge free radicals in order to inhibit chain initiation and to break chain propagation by donating hydrogen atoms or  electron that convert them into a more stable product was determined using the DPPH assay (Fig. 3). Results obtained showed that all honey samples, regardless of plant of collection, were  oxidatively active, however, their ability to scavenge free radicals varied widely, ranging from moderate (45.94+3.14%) to high (83.13+4.21%) in both ecosystems. Honey from the southern rainforest zone had a range of 46.24+2.96 – 81.83+5.31%, while honey samples from the northern savannah zone varied between 45.94+2.94 and 83.13+4.97%. 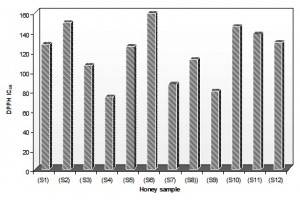 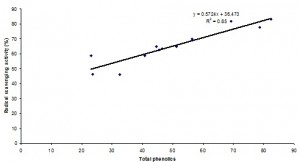 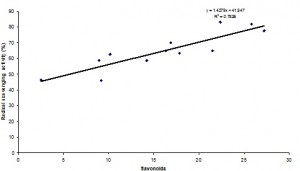 However, other components such as peptides, organic acids, enzymes, Maillard reaction products and other minor components may also contribute to the observed antioxidant activity in the honey samples 1, 4, 9, 11.

Generally, the present study showed that honey samples from both the northern savannah and southern rainforest ecosystems; though varying in activity were good free radical scavengers. They also showed high content of phenolic compounds, with low metal chelating ability.

However, the relationship between floral origin and concentration of these variables are complex and a more focused investigation would be necessary to ascertain their exact nature.