ABSTRACT: Four crude extracts viz, methanol extract of fruit and n-hexane, dichloromethane, methanol extracts of the leaf of R. tetraphylla were investigated for in vitro antioxidant activity at different concentrations (5, 50 and 100 μg). Antioxidant ability is expressed as equivalents of ascorbic acid and was calculated using standard graph. The results indicated that the leaf n-hexane and methanol extracts was found to be significantly active at 5μg when compared with BHA, and at 50 μg concentration the methanol leaf extract found be very high. The fruit methanol extract was found to be active and the activity increased with increase in dose, but not as that of BHA. The experimental results show that the activity exhibited by the solvent extracts is dose dependent

INTRODUCTION: Oxidation reactions are one of the destructive processes and can produce free radicals, which can start chain reactions that damage cells. Oxidative stress is a result of excessive production of reactive oxygen species (ROS), super oxide, hydrogen peroxide, hydroxyl radicals and these species leads to uncontrolled reactions. Molecular oxygen is an essential component for all living      organisms, but suffer from injury if exposed to oxygen concentration of more than 21%. 1 Oxidative free radicals are formed continuously in the human system and have been concerned in several human diseases. 2

When this resistance mechanism is insufficient, oxidative stress can damage proteins, carbohydrates, lipid and nucleic acids leading to the generation of free radicals, other reactive oxygen species or impaired antioxidant defense mechanism and has been concerned in a variety of pathological conditions like rheumatoid arthritis, autoimmune diseases, myocardial infarction, cancer, atherosclerosis and heart diseases. 3

Even if these free radicals can be scavenged by the in vivo produced antioxidants, but endogenous antioxidants are insufficient to completely remove them to maintain a balance. As a result, dietary antioxidants are necessary to counteract excess free radicals. 4 Antioxidants are widely used as ingredients in dietary supplements in the hope of maintaining healthiness and preventing diseases such as cancer, coronary heart disease and even altitude sickness. In addition to these uses of natural antioxidants in medication, these compounds have many industrial uses, such as preservatives in cosmetics, food and preventing the dilapidation of rubber and gasoline. 3, 5 Phytochemicals in vegetables, fruits, spices and traditional herbal medicinal plants have been found to play protective roles against many human chronic diseases. These diseases are associated with oxidative stress caused by excess free radicals and other reactive oxygen species. Several, steroids, triterpenoids, steroidal glycosides, flavonoids, and alkaloids have been reported which shows antioxidant activity. 6, 7An antioxidant is any substance that when present at low concentrations compared to oxidizeable substance, considerably delays or prevents oxidation of that substrate. Different aspects of neuroprotection are being examined, focused on different elements leading to loss of nerve cells .8

These antioxidants may be endogenous or exogenous in origin. Based upon the mode of action, antioxidants may be classified as chain breaking and preventive antioxidants. In the midst of the most prominent defenses are the enzyme catalase (CAT), superoxide dismutase (SOD) and glutathione peroxidase (GSHPx) which constitute the principal intracellular antioxidant defense systems by removing hydrogen peroxide and superoxide anion. Evidence indicates that phytochemicals having antioxidant properties reduce the symptoms of neurodegeneration. Various studies have indicated that phenolic substances such as flavonoids are considerably potent antioxidants. 9 Flavonoids have the property of scavenging free radical and preventing lipid peroxidation.10

The Rauwolfia tetraphylla belongs genus Rauwolfia and  family Apocyanaceae, that consists of around one thousand species, five of which are inhabitant to India.11 R. tetraphylla is a woody shrub, tender parts of this plant are puberulous and grows up to 1½ m in height,  leaves are four at every node, elliptic and ovate. Inflorescence develops in axillary, 5-7 flowered corymbs. Flowers are white or yellowish white, fruit is a drupe and seeds are ovoid.12 About 30 indole alkaloids are reported in Rauwolfia and reserpine holds the first place among them. Other regularly reported alkaloids are reserpitine, ajmalicine, deserpitine, sarpagine, rescinnamine and yohimbine.13 Reserpine is a potent alkaloid that depresses the lowers blood pressure and central nervous system. The leaf extract of R. tetraphylla is intended for the treatment of cholera, fever and eye disease. It is also used as antihypertensive, also in intestinal disorders, diarrhea and dysentery.14 The leaves are crushed and applied over snakebite site.15 Fruits of this plant are used to cure spleen disorders.15 R. tetraphylla is economically significant because of the presence of alkaloids, which are localized in the roots.16 The roots are useful in the treatment of cardiovascular diseases, hypertension and also as a sedative agent. The extract of the root is precious for intestinal problems. Roots are supposed to stimulate uterine contraction in case of difficult delivery.17 R. tetraphylla is  becoming critically endangered due to its wide indiscriminate collection from wild, poor seed germination and lack of sufficient commercial plantation.18

Literature reviews confirm that flavonoids, triterpenoids, steroids, steroidal glycosides, and alkaloids have been reported which shows antioxidant activity. 6, 7 Flavonoids have been reported to be connected with antioxidative action in biological systems, performing as scavengers of singlet oxygen and free radicals.19, 20 In view of the above findings in literature we tried to examine the parts of the plant R. tetraphylla for its total antioxidant property by taking the leaf and fruit to compare its antioxidant potential. The results recommended that different solvent crude extracts of R. tetraphylla have antioxidant activity, which may be obliging in preventing or slowing progress of various oxidative stress related diseases.

Collection of the plant material:

The fresh leaves and fruits of R. tetraphylla were collected in nursery of medicinal plants near namada chilume, Tumkur and were authenticated at the Department of Botany, Tumkur     University, Tumkur, Karnataka State. India. The leaves and fruits were washed thoroughly two to three times with running tap water and once with sterile distilled water and immediately sprayed with alcohol. The leaf material was then dehydrated under shade. After complete aeration, the samples leaf and fruit was cut into small pieces and then slashed to coarse powder with the help of mechanical grinder and the powder was stored in a appropriate airtight container for further use.

Preparation of the extracts:

Extraction is the general process for separation of active constituents by the use of different solvents. Weighed amount (250 gm) of coarsely powdered material leaf and fruit was successively extracted using soxhlet extraction method with n-hexane, dichloromethane and methanol. Each extraction was carried out nearly for 18hr. After each extraction, the left over plant material was removed from   extractor, dried and reloaded in the extractor for subsequent extraction until the solvent became colorless. The extracts obtained were further concentrated by evaporating solvent using Buchi type evaporator under reduced pressure and controlled temperature. The extracts obtained was dried under vacuum, packed and stored in refrigerator for further use.

TABLE 1: DETAILS OF THE EXTRACTION AND YIELD OF R. TETRAPHYLLA LINN.

The phytochemical tests of leaf and fruit of R. tetraphylla was carried out to check the presence of phytoconstituents present in various solvent extracts as reported by Khandelwal et al 21.

The total antioxidant ability was measured by spectrophotometric method of Prieto et al. 22 various concentrations of solvent extracts of leaf and fruit (5, 50 and 100 μg) were taken in a series of test tubes. To this, 1.9 ml of reagent solution (28 mM sodium phosphate, 4 mM ammonium molybdate and 0.6 M sulfuric acid) was added. The tubes were incubated at 95 °C for 90 min and permitted to cool. The absorbance of the aqueous solution of each was measured at 695 nm against a blank. Antioxidant capacities were expressed as equivalents of ascorbic acid and were calculated using standard graph of ascorbic acid. In this activity Butylated hydroxy anisole (BHA) was used as reference standard. The values are expressed as ascorbic acid equivalents in µg per mg of extract.

Total Antioxidant Activity: From the results, the total antioxidant capacity was found to be high in methanol extract of R. tetraphylla leaves at 50 µg (**denotes that the total anti-oxidant capacity was so high in terms of absorbance that it was beyond the measurable range of the spectrophotometer.) and at 100 µg, dichloromethane leaf extract of R. tetraphylla (32.2 µg), leaf of n-hexane crude extract (21.8 µg) followed by R. tetraphylla fruit methanol crude extract (35 µg of ascorbic acid/mg of extract) (Table 2).

** denotes that the total anti-oxidant capacity was so high in terms of absorbance that it was beyond the measurable range of the spectrophotometer.

The phytochemical tests revealed that the leaf n-hexane and dichloromethane extracts showed (+ve) test for steroids. Whereas, the methanol extracts of leaf and fruit showed +ve test for steroids, alkaloids, flavonoids, phenolics and glycosides. 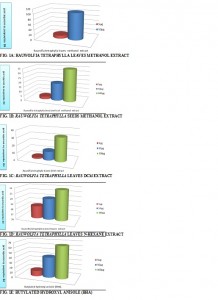 DISCUSSION: Total antioxidant capacity by Phosphomolybdenum method assay is based on the reduction of Mo (VI) to Mo (V) by the sample analyzed and the consequent formation of green phosphate/Mo (V) complex at acidic pH. The phosphomolybdenum method is quantitative     because the total antioxidant activity is expressed as the number of equivalents of ascorbic acid. 22

The present study shows that all extracts exhibited increased antioxidant activity or decreased pro-oxidant activity with escalating concentration. However, their activities differed according to the type of extract added to the system. The results suggested that various solvent crude extracts of R. tetraphylla have antioxidant activity, which may be supportive in preventing or slowing development of different oxidative stress related diseases.

CONCLUSION: The present research work indicate that the marked antioxidant activity of R. tetraphylla seems to be due to the presence of flavonoids, which may act in a similar fashion as reductions by donating the electrons and reacting with free radicals to convert them to more stable product  and discontinue the  free radical chain reaction. The plant may be useful for the treatment of various diseases by free radicals. Herbal drugs containing free radical scavengers are gaining importance in treating various diseases. Over all, the plant may be useful as antioxidants thus helping in the treatment of many diseases mediated by reactive oxygen species. Hence, it can be used for herbal pharmaceutical formulation.

ACKNOWLEDGEMENT: The author Vinay K.N expresses thanks to AMC research centre and Tumkur University, for providing necessary facilities to carry out the present work.