The Methanolic extract of leaves (LE) and Methanolic extract of flowers (FE) of Nerium indicum (Arali) was analysed for Antioxidant activity (AOA) in terms of DPPH free radicals, Total Phenolic Content (TPC) was measured in terms of Gallic acid equivalent and Flavonoid content was analysed in terms of Quercetin equivalent. The antioxidant activities of (LE & FE) were found to be 72.8% and 67 %. TPC of study extracts (LE & FE) were found to be 227 mg/100g and 449 mg/100g. The Total Flavonoid content of (LE & FE) were found to be 125 mg/100g and 199 mg/100g respectively. Superoxide anion radical scavenging activity of flowers was 66 % compared to leaves 25 %. Similarly Lipid Peroxidation showed higher activity in flowers than leaves. Enzymatic antioxidant activity such as Superoxide Dismutase, Glutathione peroxidase and Catalase of Nerium indicum flowers were around 10% to 30% higher than that of leaves. The results clearly indicate that the methanol extracts of Nerium indicum flowers have more potent antioxidant activity than leaves.

INTRODUCTION: Oxidative stress depicts the existence of products called free radicals and reactive oxygen species (ROS), which are formed under normal physiological conditions but becomes deleterious when not being eliminated by the endogenous systems, In fact, oxidative stress results from an imbalance between the generation of reactive oxygen species and endogenous antioxidant systems. ROS are major sources of primary catalysts that initiate oxidation in vivo and in vitro and create oxidative stress which results in numerous diseases and disorders 1, 2 such as cancer 3, cardiovascular disease 4.

Oxygen derived free radicals such as superoxide anions, hydroxyl radicals and hydrogen peroxide are cytotoxic and give rise to tissue injuries 5. Excessive amount of ROS is harmful because they initiate bio molecular oxidation which leads to cell death and creates oxidative stress causes inadvertent enzyme activation and oxidative damage to cellular system 6.

Cells are equipped with different kinds of mechanisms to fight against ROS and to maintain the redox homeostasis of cell. For example, antioxidant enzymes such as superoxide dismutase (SOD) catalase (CAT) and glutathione peroxidase (GPx) play important roles in scavenging the free radicals and preventing cell injury 7. Molecules such as vitamin C and E inhibit lipid peroxidation in cell. When the mechanism of antioxidant protection becomes unbalanced in human body, antioxidant supplement may be used to help reduce oxidative damage.

Medicinal plants are important source of antioxidants 8. Natural antioxidants increase the antioxidant capacity of the plasma and reduce the risk to certain diseases such as cancer, heart diseases and stroke 9. The secondary metabolites like phenolics and flavonoids from plants have been reported to be potent free radical scavengers. They are found in all parts of plants such as leaves, fruits seeds, roots and bark 10. There are many synthetic antioxidants in use. It is reported, however, they have several side effects 11, such as risk of liver damage and carcinogenesis in laboratory animals 12, 13, 14. There is therefore a need for more effective, less toxic and cost effective antioxidants. Medicinal plants appear to have these desired comparative advantages, hence the growing interest in natural antioxidants from plants.

The antioxidant activity of flower and Leaves has been determined with a variety of methods. Many researches have indicated that Arali (Nerium indicum) possessed high antioxidant activity. The present investigation evaluated the levels of antioxidant compounds such as DPPH radical Scavenging activity, Total Phenolics, Total Flavonoid content, Superoxide radical Scavenging activity, Lipid Peroxidation activity and Enzymatic antioxidant factor such as Superoxide Dismutase, Glutathione Peroxidase and Catalase.

Preparation of Plant Extract: Nerium indicum flowers and leaves were separately cut into pieces, dried and then ground to powdered form, which was then kept in an air-tight plastic bag until use. The leaves and flowers were extracted at 80°C in methanol for 6 hrs using ultra sonication. The extracts were then filtered through whatmann filter paper and the filtrate was concentrated with a vacuum rotary evaporator under low pressure.

Arali (Nerium indicum) was identified and authenticated by a Dr. P.N Sudha, Department of chemistry, Thiruvallur University, Vellore, Tamil Nadu, India and was collected in Oct 2010.

The antioxidant activity of methanolic extracts of flowers and leaves expressed in terms of percentage.

Total Phenolic Content (TPC): Plant polyphenols, a diverse group of phenolic compounds (flavonols, flavonols, anthocyanin, phenolic acid, etc.) possess an ideal structural chemistry for free radical scavenging activity. Antioxidative properties of polyphenols arise from their high reactivity as hydrogen or electron donors from the ability of the polyphenol derived radical to stabilize and delocalize the unpaired electron and from their potential to chelate metal ions (termination of the Fenton reaction ) 20.

The amount of total phenol content can be determined by Folin-Ciocalteu reagent Method 21. 0.5 ml of extract and 0.1ml of Folin-Ciocalteu reagent (0.5N) were mixed and incubated at room temperature for 15min. Then 2.5 ml saturated sodium carbonate was added and further incubated for 30 min at room temperature and absorbance measured at 760nm. Gallic acid can be used as positive control.

Total Flavonoid Content (TFC): The antioxidative properties of flavonoids are due to several different mechanisms, such as scavenging of free radical, chelation of metal ions such as iron and copper and inhibition of enzymes responsible for free radical generation 22. Depending on their structure, flavonoids are able to scavenge practically all known ROS. The total flavonoid content can be determined by aluminium chloride method 23. The reaction mixture (2.0) ml comprised of 1.0ml of extract, 0.5ml of aluminium chloride (1.2%) and 0.5 ml of potassium acetate (120 mM) was incubated at room temperature for 30 min and the absorbance measured at 415 nm. Quercetin can be used as a positive control. The flavonoid content is expressed in terms of Quercetin equivalent (mg /100g of extracted compound).

Superoxide Anion Radical Scavenging Activity: Although Superoxide anion is a weak oxidant, it gives rise to generation of powerful and dangerous hydroxyl radicals as well as singlet oxygen, both of which contribute to oxidative stress 24. Numerous biological reactions generate superoxide anions which are highly toxic species. The decrease of absorbance at 560nm with antioxidants thus indicates the consumption of superoxide anion in the reaction mixture. The Superoxide anion Scavenging activity is measured as described 25. The Superoxide anion radicals are generated in 3.0ml of Tris-HCl buffer (16mM, pH 8.0), containing 0.5ml of NBT (0.3mM), 0.5ml NADH (0.936mM) Solution, 1.0ml of extract and 0.5ml Tris-HCl buffer (16mM, pH 8.0). The reaction is started by adding 0.5ml PMS solution (0.12mM) to the reaction mixture, incubated at 25°C for 5 min and then the absorbance is measured at 560nm against blank sample. Gallic acid can be used as positive control.

Lipid Peroxidation Activity: Lipid peroxidation was estimated colorimetrically by thiobarbituric acid reactive substances (TBARS) using the modification method 26. In brief, 0.1 ml of extracts was treated with 2 ml (1:1:1 ratio) TBA-TCA-HCl reagent (thiobarbituric acid 0.37%, 15% trichloroacetic acid and 0.25 N HCl). All the tubes were placed in a boiling water bath for 30 min and cooled. The amount of malondialdehyde formed in each of the samples was assessed by measuring the absorbance of clear supernatant at 535 nm against reference blank. Percentage inhibition was calculated using the equation.

Superoxide Dismutase Activity (SOD): SOD activity was assayed by the nitroblue tetrazolium (NBT) method 27. The reaction medium was prepared and to 3 ml reaction medium, 1 ml of enzyme extract was added. The reaction medium contained 1.17x10-6 M riboflavin, 0.1 M methionine, 2x10-5 potassium cyanide and 5.6x10-5 M nitroblue tetrasodium salt (NBT) dissolved in a 0.058 M sodium phosphate buffer (pH 7.8). The mixture was illuminated in glass test tubes by two sets of Philips 40 W fluorescent tubes. Illumination started to initiate the reaction at 30°C for 1 h. Those without illumination were saved as blank and kept in the dark. The absorbance was read at 560 nm, unit is defined as the amount of change in the absorbance by 0.1 per hour per milligram protein under the assay condition.

Glutathione Peroxidase (GPX) Activity: GPX was assayed by the method 28. The reaction mixture contained 0.1 M phosphate buffer pH 7.0, 1mM EDTA, 10 mM glutathione (GSH), 1mM NaN3, 1 unit of glutathione reductase, 1.5mM NADPH and 0.1 ml of extract, after incubation for 10 min at 37°C, H2O2 was added to each sample at a final concentration of 1mM. GPX activity was measured as the rate of NADPH oxidation at 340 nm.

Catalase (CAT) Activity: The reaction mixture contained 12 µl of 3% (v/v) H2O2 and 100 µl of extract in 50mM phosphate buffer (pH 7.0) at a final volume of 1.0 ml. Samples were incubated for 2 min at 37°C and the absorbance of the samples were monitored for 5 min at 240nm. The change in absorbance is proportional to the breakdown of H2O2 29. The enzyme activity was expressed in Units of 1 mM of H2O2 reduction per min per mg protein.

Similarly activities of enzymes such as Superoxide Dismutase, Glutathione  Peroxidase and Catalase of Crude Nerium indicum flowers extract were found to be 629mg/min/mg protein, 17.4 mg/g and 9.4 µmol/min/g  higher than 276mg/min/mg protein, 10.4mg/g  and 8.1µmol/min/g  of leaves (Fig. 2 & 3). 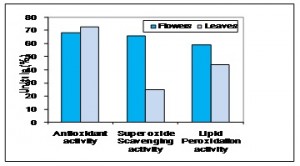 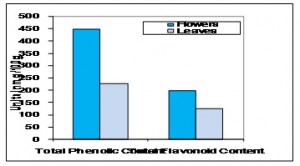 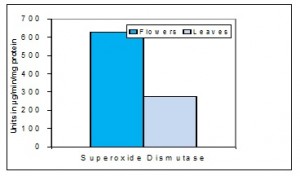 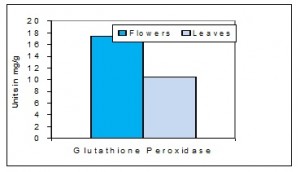 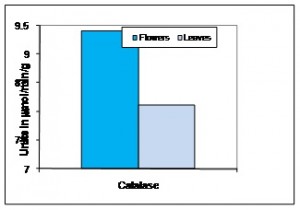 DISCUSSION: The DPPH test provides information on the reactivity of the test compounds with a stable free radical. DPPH gives a strong absorption band at 517 nm in visible region. When the odd electron become paired off in the presence of a free radical Scavenger, the absorption reduces and the DPPH Solution is decolorized as the color change from deep violet to light yellow. The degree of reduction in absorbance measured is an indicative of the radical scavenging (antioxidant) power of extract. The results show that methanolic extracts of Nerium Indicum leaves and flowers appeared to be a potent antioxidant activity.

Phenols are very important plants constituents with multiple biological functions including antioxidant activity because of their radical scavenging ability due to their OH groups. The results showed that methanolic extracts of Nerium indicum flowers contained a higher amount of phenolics than the extracts of Nerium indicum leaves based on Folin-Ciocalteu Procedures.

The presence of flavonoids might be responsible for the antioxidant activity of the plants. In very recent years, flavonoids, potent free radical scavengers have attracted a tremendous interest as possible therapeutics against free radical mediated diseases. The above result showed that methanolic extracts of Nerium indicum flowers has potent antioxidant potential due to high flavonoid content.

Lipids are considered to be extremely susceptible to the oxidation by ROS. Lipid peroxidation is an autocatalytic process which is a common cause of cell death. Therefore, inhibition of lipid peroxidation has been used as an important index of antioxidant activity. The result shows that methanolic extracts of Nerium indicum flowers has more lipid peroxidation activity compared to leaves, Similarly Superoxide anion radical Scavenging activity.

These results are encouraging enough to pursue in vivo evaluation of antioxidant activity of methanolic extracts of Nerium indicum flowers rather than leaves.

A. Vinayagam and P. N. Sudha