ABSTRACT: In this present study, we investigated the phytochemical constituents screening and in-vitro antioxidant activity of hydro-alcoholic (methanol 70%v/v) extracts of Soymida febrifuga bark. Soymida febrifuga is a huge tree bearing deciduous foliage and having a tough bark belonging to the family Meliaceae. Traditionally the different parts of plant such as root, leaves, bark, and flower are used for various human ailments. Thebark extracts are used in treatment of rheumatoid arthritis asthma and good for ulcers .The decoction of the bark has bitter resin used in vaginal infections, rheumatic pains , stomach pains, wounds, dental diseases, uterine bleeding and haemorrhage .The bark is also used as an acrid, refrigerant, laxative, good for sore throat, removes ‘vata’ and cures ‘tridosha’ in Ayurveda. Apart from many uses various active constituents like methyl angolensate, luteolin 7-O-glucoside, quercetin, sitosterol, myrecetin were isolated. It also possesses various pharmacological activities such as anticancer, antihelmenthic, antioxidant ant malarial and antimicrobial. In view of this the hydro alcoholic bark extract of S. febrifuga produced a dose dependent inhibition of free radical generation of superoxide anion, hydroxyl radical and DPPH radical In vitro antioxidant activity.

INTRODUCTION: Herbal  medicine  was  the  primary  form  of  medicine  and  it  has been existing  from  the  prehistoric  times. About  80%  of  the world’s  population,  it  is  not  surprising  to  find  in  many  countries  of  the  world  there  is  a  well  established  system  of  traditional  medicine,  whose  remedies  are  still  been  compiles 1. A great number of plants worldwide showed a strong antioxidant activity and a powerful scavenger activity against free radicals 2, 3.

There is an increasing interest in the study of antioxidant substances mainly due to the findings of the therapeutic effects of free radical scavengers on the organism 4. Therefore, evaluation  of  Indian  traditional  medicine  is  possible  through the proper  exploitation  and  exploration  of  wide  biodiversity  and  great ancient  treatises  of  traditional  medicine  with  the  light  of  modern  tools and  techniques 5.

In this scenario, Soymida febrifuga A. Juss. belonging to the family Meliaceae is an indigenous lofty deciduous medicinal tree found on dry stony hills and on laterite soil endemic to India 6, 7. Thebark extracts of S. febrifuga are used extensively in the treatment of leucorrhoea, menorrhagia, dysmenorrhea 8. Bark is used as rheumatic swellings, oedema, vaginal infections, dental diseases, uterine bleeding and haemorrhage 9. This has triggered the authors and the present study was conducted for its phytochemical screening and In vitro Antioxidant activity.

Preparation of hydro alcoholic extract of Soymida febrifuga: Freshly collected bark was dried under shade and the dried material was milled to obtain a coarse powder. To the coarse powder (500gms) in a maceration chamber 2.5 litre of methanol (70% v/v) was added and macerated for 5 days at room temperature. The macerated extract was obtained and concentrated under vacuum at temperature of 45°C by using rotary evaporator, dried completely, weighed and stored in a dessicator. The details of extraction are mentioned in Table 1.

TABLE 1:  DETAILS OF THE EXTRACTION

Preliminary phytochemical studies 10-17: Thehydroalcoholic extract of the bark of Soymida febrifuga was subjected to chemical tests for the identification of their constituents. A spectrum of natural compounds like triterpenoids, alkaloids, glycosides, steroids, flavanoids, tannins and other similar secondary metabolites, which exert physiological activities are synthesized in the plant, in addition to the carbohydrates, proteins and lipids that are utilized by man as food materials. Different qualitative chemical tests were performed for establishing the profile of a given extract for its nature of chemical composition. The details of constituents which are present in the extract are mentioned in Table 2.

Superoxide Radical Scavenging Activity: Superoxide scavenging activity of the plant extract was determined by McCord & Fridovich, 1969 method18, which depends on light induced superoxide generation by riboflavin and the corresponding reduction of nitroblue tetrazolium.

DPPH Radical Scavenging Activity: The scavenging activity for DPPH free radicals was measured according to the procedure described by Braca et al., 200320. In DPPH assay method is based on the reduction of alcoholic DPPH solution (dark blue in color) in the presence of a hydrogen donating antioxidant converted to the non radical form of yellow colored diphenyl-picrylhydrazine. Lower the absorbance higher the free radical scavenging activity 21.

In-vitro antioxidant activity: In the present study, the hydro alcoholic bark extract of Soymida febrifuga was found to possess concentration dependent scavenging activity on DPPH radicals and the results were given in Table 3.

The Hydro alcoholic bark extract of Soymida febrifuga was found to possess concentration dependent scavenging activity on superoxide generated by photo reduction of riboflavin and the results are given in Table 4.

The Hydro alcoholic bark extract of Soymida febrifuga was found to possess concentration dependent scavenging activity on hydroxyl radicals and the results were given Table 5. 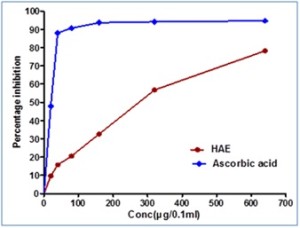 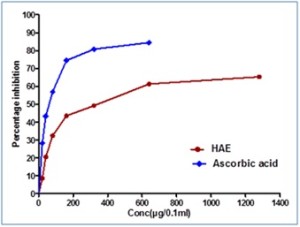 The values of Percentage inhibition were ranging from 10.3±0.3 to 67.8±1.6. The mean IC50 values for hydroxyl radical of Hydro alcoholic bark extract of Soymida febrifuga was found 266.30 µg.

The mean IC50 value of ascorbic acid was found to be 68µg. The results were given in Fig. 3 and Table 6. 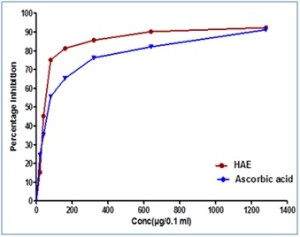 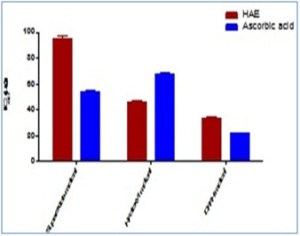 CONCLUSION: From the results it can be concluded that the hydro alcoholic bark extract of Soymida febrifuga has good antioxidant property. Further studies are warranted to identify and isolate the active principle responsible for its pharmacological activities.

All © 2013 are reserved by International Journal of Pharmaceutical Sciences and Research. This Journal licensed under a Creative Commons Attribution-NonCommercial-ShareAlike 3.0 Unported License