In the present study crude methanolic extract of Stephania japonica leaf was investigated for possible antioxidant, analgesic and cytotoxic activity. The extract showed antioxidant activity in DPPH radical scavenging activity, nitric oxide scavenging activity and reducing power assays. In both DPPH radical and NO scavenging assay, the extract exhibited moderate antioxidant activity and the IC50 values in DPPH radical scavenging and NO scavenging assays were found to be 105.55 ± 1.06 μg/ml and 129.12 ± 0.15 μg/ml, respectively while the IC50 values of ascorbic acid were 12.30 ± 0.11 μg/ml and 18.64 ± 0.22 μg/ml, respectively. Reducing power activity of the extract increased in a dose dependent manner. Analgesic activity of the crude extract was evaluated using acetic acid-induced writhing model of pain in mice. The crude extract at 200 mg/kg and 400 mg/kg b.w. doses displayed significant (p < 0.001) reduction in acetic acid induced writhing in mice with a maximum effect of 75.89 % reduction at 400 mg/kg b.w. which is comparable to the standard, diclofenac sodium (86.52 %). The extract was also investigated for toxic potentiality using Brine Shrimp lethality bioassay. In this bioassay the extract showed significant toxicity to Brine Shrimp nauplii with the LC50 value of 25.19 ± 0.98 μg/ml.

INTRODUCTION: Free radicals contribute to more than one hundred disorders in humans including atherosclerosis, arthritis, ischemia and reperfusion injury of many tissues, central nervous system injury, gastritis, cancer and AIDS 1, 2. Aerobic cells are endowed with extensive antioxidant defense mechanisms including both low molecular weight scavengers, such as α-tocopherol, cysteine, β -carotene, reduced glutathione, ascorbic acid and enzymatic systems, such as superoxide dismutase (SOD), catalase (CAT), glutathione peroxidase (GSHPx), glutathione reductase (GSH-Red) and glucose-6- phosphate dehydrogenase (G6PD), which counteract the damaging effects of toxic oxygen species3. Currently, the possible toxicity of synthetic antioxidants has been criticized. It is generally assumed that frequent consumption of plant-derived phytochemicals from vegetables, fruit, tea, and herbs may contribute to shift the balance toward an adequate antioxidant status 4. The interest in natural antioxidant, especially of plant origin, has greatly increased in recent years 5. Thus recent studies have investigated the potential of plant products to serve as antioxidants to protect against various diseases induced by free radicals. Plant products including phenolics, flavonoids, tannins, proanthocyanidins, and various plant or herbal extracts have been reported to be radical scavengers and inhibitors of lipid peroxidation 6, 7. Pain is a sensorial modality and primarily protective in nature, but often causes discomfort. It is the most important symptom that brings the patient to physician. Analgesics relieve pain as a symptom, without affecting its cause8. Currently available analgesic drugs such as opiates and NSAIDs are not useful in all cases due to their adverse effects. In this respect new compounds with improved pain management capacity and fewer side effects are being sought with urgency.

Stephania japonica (Thumb.) Miers, (Family-Menispermaceae) is a slender twining shrub with greenish yellow flowers and large tubers. It is native to eastern and southern Asia and Australasia.

In Bangladesh, it is grown in many areas. The leaves and roots are bitter and astringent, and used in fevers, diarrhea, dyspepsia and urinary disease 9.

As a part of our ongoing investigations on local medicinal plants of Bangladesh 10, in this paper, we reported antioxidant, analgesic and toxic potentiality of the leaves of Stephania japonica.

Plant materials: The plant ‘Stephania japonica (Thunb.) Miers was collected from the village Uthali under Jibannagar thana of Chuadanga district, Bangladesh during the month of August 2009. The plants were mounted on paper and the sample was identified by Mrs. Mahmuda Begum, senior scientific officer, Bangladesh National Herbarium, Dhaka, where the voucher specimen has been deposited.  Its DACB Accession Number is 34, 393.

Preparation of plant extract: The plant material was shade-dried with occasional shifting and then powdered with a mechanical grinder, passing through sieve #40, and stored in a tight container. The dried powder material (1.5 kg) was refluxed with MeOH for three hours. The total filtrate was concentrated to dryness, in vacuo at 40oC to render the MeOH extract for investigation.

Animal: For the experiment Swiss albino mice of either sex, 3-4 weeks of age, weighing between 20-25 g, were collected from the animal research branch of the International Center for Diarrheal Disease and Research, Bangladesh (ICDDRB). Animals were maintained under standard environmental conditions (temperature: (24.0±1.0°), relative humidity: 55-65% and 12 h light/12 h dark cycle) and had free access to feed and water ad libitum. The animals were acclimatized to laboratory condition for one week prior to experiments. All protocols for animal experiment were approved by the institutional animal ethical committee.

Phytochemical screening: The freshly prepared crude extract was qualitatively tested for the presence of chemical constituents. Phytochemical screening of the extract was performed using the following reagents and chemicals: Alkaloids with Dragendroff’s reagent, flavonoids with the use of Mg and HCl; tannins with ferric chloride and potassium dichromate solutions and saponins with ability to produce stable foam and steroids with Liebermann- Burchard reagent, reducing sugars with Benedict’s reagent. These were identified by characteristic color changes using standard procedures 9.

Acetic acid-induced writhing test: The analgesic activity of the samples was also studied using acetic acid-induced writhing model in mice. Test samples and vehicle were administered orally 30 min before intraperitoneal administration of 0.7% acetic acid but Diclofenac-Na was administered intraperitoneally 15 min before injection of acetic acid. After an interval of 5 min, the mice were observed for specific contraction of body referred to as ‘writhing’ for the next 10 min11.

In vitro Tests for antioxidant activity:

Free radical scavenging activity measured by 1, 1-diphenyl-2-picryl-hydrazyl (DPPH): The free radical scavenging activity of MeOH extract based on the scavenging activity of the stable 1,1-diphenyl-2- picrylhydrazyl (DPPH) free radical, was determined by the method described by Braca et al. (2001) 12. Plant extract (0.1 ml) was added to 3ml of a 0.004% MeOH solution of DPPH. Absorbance at 517nm was determined after 30 min, and the percentage inhibition activity was calculated from [(A0–A1)/A0] x 100, where A0 is the absorbance of the control, and A1 is the absorbance of the extract/ standard. IC50 value was calculated from the equation of line obtained by plotting a graph of concentration (μg/ml) versus % inhibition.

Nitric oxide radical scavenging assay: The procedure is based on the method, where sodium nitroprusside in aqueous solution at physiological pH spontaneously generates nitric oxide, which interacts with oxygen to produce nitrite ions that can be estimated using Greiss reagent. Scavengers of nitric oxide compete with oxygen leading to reduced production of nitrite ions. For the experiment, sodium nitroprusside (10mM) in phosphate buffered solution (pH 7.4) was mixed with different concentrations of plant extract of S. japonica dissolved in 10% DMSO and incubated at room temperature for 150 min.

The same reaction mixture without the extract but the equivalent amount of the solvent used served as the control. After incubation, 0.5 ml of Griess reagent (1% sulfanilamide, 2% H3PO4 and 0.1% N-(1-naphthyl) ethylenediamine dihydrochloride was added. The absorbance was measured at 546 nm and the percentage inhibition activity was calculated from [(A0–A1)/A0] x 100, where A0 is the absorbance of the control, and A1 is the absorbance of the extract/ standard 13. IC50 value was calculated from the equation of line obtained by plotting a graph of concentration (μg/ml) versus % inhibition.

Reducing power activity: The reducing power of S. japonica was determined according to the method previously described 14. Extracts at different concentrations in 1 ml of 10% DMSO were mixed with 2.5 ml of phosphatebuffer (0.2M, pH 6.6) and 2.5 ml potassium ferricyanide [K3Fe (CN)6] (1%), and then the mixture was incubated at 500C for 30 min. Afterwards, 2.5 ml of trichloroacetic acid (10%) was added to the mixture, which was then centrifuged at 3000 rpm for 10 min. Finally, 2.5 ml of upper layer solution was mixed with 2.5 ml distilled water and 0.5 ml FeCl3 (0.1%), and the absorbance was measured at 700 nm. Increased absorbance of the reaction mixture indicated increased reducing power.

Brine Shrimp Lethality Bioassay: The cytotoxic activity of the plant was evaluated using Brine Shrimp lethality bioassay method 15 where 6 graded doses (viz,. 5mg/ml, 10mg/ml, 20mg/ml, 50mg/ml, 100mg/ml, 200mg/ml) were used. Brine shrimps (Artemia salina Leach) nauplii Ocean 90, USA were used as test organisms. For hatching, eggs were kept in brine with a constant oxygen supply for 48 hours. The nature nauplii were then used in the experiment. DMSO was used as a solvent and also as a negative control. The median lethal concentration LC50 of the test sample after 24 hours was obtained by a plot of percentage of the dead shrimps against the logarithm of the sample concentration. Vincristine sulfate was used as a reference standard in this case.

Statistical analysis: All the in vitro experimental results were mean ± SEM of three parallel measurements. Results of in vivo study were given as mean ± S.E.M. and data were evaluated by using student’s t test. P values <0.001 were regarded as significant.

Table 2: Effects of the methanolic extract of Stephania japonica leaf on acetic acid-induced writhing in mice

Nitric oxide (NO·) scavenging activity: Table 3 shows the result of nitric oxide scavenging activity (IC50 value) of the methanolic extract of S. japonica compared with various reference compounds such as ascorbic acid and quercetin. IC50 value of the extract of was 129.12±0.15 µg/ml, whereas, standard ascorbic acid and quercetin showed 18.64±0.22 µg/ml and 27.69±0.57 µg/ml respectively.

TABLE 3: ANTIOXIDANT ACTIVITIES OF THE S. JAPONICA LEAF EXTRACT ON DPPH, AND NO

aDPPH is the free radical scavenging activity (IC50: µg/ml), bNO is the inhibition of NO production (IC50: µg/ml), *p < 0.001 by student’s test for values between the sample and the control

Reducing power ability: For the measurement of the reductive ability, we investigated the Fe3+ to Fe2+ transformation in the presence of methanolic extract. Like the antioxidant activity, the reducing power of S. japonica increased with increasing concentration of the sample. Figure 1 shows the reductive capabilities of the S. japonica compared with ascorbic acid, galic acid and quercetin. 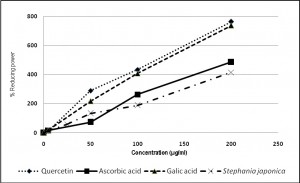 Preliminary phytochemical screening showed the presence of tanin, alkaloid and glycoside in the plant extract. So, the observed analgesic activity may be attributed to these compounds. Moreover, recent studies suggest that the inflammatory tissue damage is due to the liberation of reactive oxygen species form phagocytes invading the inflammation sites 20. Again the plant extracts demonstrated antioxidant action in the tested models. So it can be assumed that Cyclooxygenase (COX) inhibitory activity together with antioxidant activity may reduce the production of free arachidonic acid from phospholipid or may inhibit the enzyme system responsible for the synthesis of prostaglandins and ultimately relive pain-sensation.

Polyphenolic compounds, like flavonoids, tannins and phenolic acids, commonly found in plants have been reported to have multiple biological effects, including antioxidant activity 21, 22, 23, 24. Tannic acid present in the plant extract, as evident from phytochemical screening, may be responsible for the antioxidant action. NO scavenging capacity of the extract may help to arrest the chain of reactions initiated by excess generation of NO that are detrimental to the human health. Nitric oxide is also implicated for inflammation, cancer and other pathological conditions 25. A direct correlation between antioxidant capacity and reducing power of certain plant extracts has been reported 26. The reducing properties are generally associated with the presence of reducing agents which have been shown to exert antioxidant action by breaking the free radical chain by donating a hydrogen atom 27. Therefore, antioxidants with free radical scavenging activities may have great relevance in the prevention and treatment of diseases associated with oxidants or free radicals 28.

The extract also showed significant cytotoxicity on Brine Shrimp nauplii. This may be due to the fact that S. japonica contains isotrilobine and trilobine, bisbenzylisoquinoline alkaloids, which was previously reported to possess multidrug-resistance-reversing activity in human breast cancer cell line 29.

CONCLUSION: The study clearly indicates that the extract possesses antioxidant and cytotoxic substances. At the same time its ability to suppress abdominal writhes confirms the analgesic property of the extract. These findings justify the traditional uses of this plant in the treatment of diabetes, wounds, inflammatory conditions, worms, infestations and malarial fever. Further research is necessary for elucidating the active principles.