ABSTRACT: Inflammation is considered a primary physiologic defense mechanism that helps the body to protect itself against infection, burn, toxic chemicals, allergens, or other noxious stimuli. Inflammatory diseases are currently treated with steroidal and non-steroidal anti-inflammatory drugs (NSAIDs). Unfortunately, both of these widely prescribed drug classes have significant negative side effects. Hence, there is a need to develop new drugs with novel modes of action that do not produce considerable side effects. The use of traditional medicine and medicinal plants in most developing countries as a normative basis for the maintenance of good health, has been widely observed. So, crude flavonoid fraction of Mitragyna parvifolia was screened for anti-inflammatory activity using Carrageenan induced method and Formalin induced method at various doses (50,100 &200 mg/kg), and the results were compared with standard drug diclofenac sodium (20 mg/kg). It showed significant activity at 200 mg/kg. The Crude flavonoid fraction was also screened for antioxidant activity at various concentrations (20, 40, 60, 80,100μg/ml) using the DPPH free radical scavenging method. The antioxidant activity was concentration-dependent which was compared with standard antioxidant ascorbic acid. The highest antioxidant activity of CFF of M. parvifolia was observed at a concentration of 100μg/ml.

Free radicals generated by UV rays are considered the main factor involved in these skin damages and diseases. The available efficacies of drugs treatment for these conditions are still very limited due to their adverse side effects. Many synthetic antioxidant agents have been developed to remediate oxidative stress. However, the factors such as high cost, lack of availability, and side effects remained major setbacks in combating oxidative stress.

In this direction, natural antioxidants such as Vitamin C & E, polyphenolic compounds, flavonoids, etc. from plant sources are considered potent and safe 2. They have received prominence as they are often free from side effects, less expensive and abundant in many plant sources. Plant-based antioxidant compounds play a defensive role by preventing the generation of free radicals and hence are extremely beneficial to alleviating the diseases caused by oxidative stress. 2 A number of medicinal plants with potent antioxidant and anti-inflammatory potential are Artemisia vulgaris, 3 Vitex negundo, 4 Albizia myriophylla, 5 Cressa cretica 6. Mitragyna parvifolia is also an important tree with antioxidant properties 7 and thus could be a potential candidate for treatments in inflammation.

Mitragyna parvifolia (M. parvifolia) is a medium-sized to large tree belonging to the family Rubiaceae 8. It is popularly known as Kaim and is found growing gregariously throughout the drier parts of India, Pakistan and Srilanka. The aerial parts, stem-bark and roots of the tree contain various indolic (tetrahydroalstonine, akkuamigine, hirsuteine etc) and oxindolic (mitraphylline, isomitraphylline, pteropodine, isopteropodine etc) alkaloids. The tree has been used in the traditional system of medicine by the natives and tribal since times immemorial. In addition M. parvifolia has got diverse medicinal and therapeutic properties such as antihypertensive, analgesic 9 anti pyretic, antiarthritic, 10 anthelmentic, 11 anxiolytic 9 antioxidant 12 etc which have been validated scientifically.

Collection and Authentication of Plant Material: The leaves were collected during the month of September from the M. parvifolia tree from Nangal, Punjab. The plant was identified and authenticated from the Forest Research Institute, Dehradun, and was allotted a voucher specimen no. 172/2011-Bot-15-1. The collected leaves were washed and air-dried. The dried leaves were powdered using a mechanical grinder and sieved with sieve no.20.

Preparation of Successive Extracts (SE): 550 g of leaf powder was packed in a Soxhlet Extractor (capacity 1L) extracted successively extracted with solvents in increasing order of polarity starting from petroleum ether (60-80°C). The assembly was allowed to run for about 50h. A dark green colored mixture of solvent and petroleum ether extract was filtered and then concentrated one-third of it volume by distilling off the petroleum ether using a simple distillation assembly. The extract was completely concentrated on a vacuum rotary film evaporator. Then the solvent-free extract obtained was air-dried and stored in refrigerator at 4±1°C. The extract obtained was weighed. The extracted plant material was unpacked and air dried to remove the traces of the solvent i.e. SPE. The dried marc was repacked in the Soxhlet extractor, and the assembly was again extracted with about 1.5 litres of the chloroform 50 h. The dark green coloured SCE extract so obtained was processed. On similar patterns the plant material was further extracted using 1.5 lit. of the other solvents i.e., ethyl acetate (SEE) and methanol (SME) and extracts were processed in a similar manner as described above.

Isolation of Crude Flavonoid Fraction (CFF): CFF was isolated from the leaves of M. parvifolia according to the procedure reported earlier. 13 The SME was used for the isolation of CFF. The methanolic extract was dissolved in water and extracted thrice with chloroform to remove the colour pigments, followed by the addition of 10% sodium chloride (NaCl) in aqueous phase dropwise in order to precipitate tannins. The resulting solution was subjected to centrifugation. The supernatant of the centrifuged solution was partitioned with ethyl acetate. The ethyl acetate layer was evaporated to get the CFF.

Radical Scavenging Activity (RSA): This assay procedure employs the use of DPPH free radical. Solution of DPPH (0.1mM) in methanol was prepared by dissolving 3.3 mg of DPPH in methanol, and volume was made up to 100ml with methanol followed by sonication to get a clear solution of DPPH 14. The standard (Ascorbic acid) stock solution and the sample (CFF) were prepared by dissolving an accurately weighed quantity of ascorbic acid/ test sample in methanol to form a solution of concentration 1mg/ml.

The working concentrations (20, 40, 60, 80, and 100µg/ml) were prepared from the stock solution by dilution method. 1ml of various dilutions of standard/ sample was added to 5ml of freshly prepared DPPH solution (0.1mM) in different volumetric flasks (10ml). The contents were shaken vigorously and were allowed to stand in the dark for 30 minutes. The control solution was prepared by the addition of 1ml of distilled water to 5ml of DPPH solution. The solution was kept in darkness for 30 minutes. The reduction in color of DPPH solution in the standard samples and control was measured at 517nm against a blank (methanol) on a UV- Visible spectrophotometer (Shimadzu UV 1650 PC). The radical scavenging activity (RSA) was calculated as a percentage of DPPH discoloration using the equation:

TABLE 1: ABSORBANCES OF THE DIFFERENT DILUTIONS OF THE STANDARD AND CFF FROM LEAVES OF M. PARVIFOLIA IN THE RADICAL SCAVENGING ASSAY

The results have been expressed as mean ± SEM (n=3).

Animals are divided into 5 groups of 5 animals for evaluating activity in the CFF.

Carrageenan Induced Method: Anti-inflammatory activity was measured using carrageenan-induced rat paw edema assay. Edema was induced by sub plantar injection of 0.1 ml of 1 % (w/v) freshly prepared solution of carrageenan in distilled water into the right-hind paw of each rat of each groups.

Animals of group 1, 2, 3, 4 and 5 were treated orally with the single dose of vehicle (distilled water), standard (Diclofenac sodium) and CFF (at dose levels of 50, 100 & 200mg/kg) respectively; 30 minutes before carrageenan injection. Paw thickness was measured using vernier calliper at time intervals of 1h up to 4 h post carrageenan challenge. Change in paw thickness was measured at the respective h.

Formalin Induced Method: Anti-inflammatory activity was measured using formalin-induced rat paw edema assay. Edema was induced by sub plantar injection of 0.1 ml of 1 % (w/v) freshly prepared solution of formalin in distilled water into the right-hind paw of each rat of each group. Animals of groups 1, 2, 3, 4, and 5 were treated orally with a single dose of vehicle (distilled water), standard (diclofenac sodium), and flavonoids (at dose levels of 50, 100 & 200mg/kg), respectively; 30 min prior to formalin injection. Paw thickness was measured using vernier calliper at 1h up to 4 h post formalin challenge. Change in paw thickness was measured at the respective h.

TABLE 7: EFFECTS OF ORAL ADMINISTRATION OF 10ML/KG DOSE OF CONTROL IN FORMALIN-INDUCED METHOD

TABLE 8: EFFECTS OF ORAL ADMINISTRATION OF 20MG/KG DOSE OF STANDARD IN FORMALIN-INDUCED METHOD

TABLE 9: EFFECTS OF ORAL ADMINISTRATION OF 50MG/KG DOSE OF FLAVONOIDS IN FORMALIN-INDUCED METHOD

TABLE 10: EFFECTS OF ORAL ADMINISTRATION OF 100MG/KG DOSE OF FLAVONOIDS IN FORMALIN-INDUCED METHOD

TABLE 11: EFFECTS OF ORAL ADMINISTRATION OF  200MG/KG DOSE OF FLAVONOIDS IN FORMALIN-INDUCED METHOD

Radical Scavenging Activity (DPPH Assay): This activity was performed using the DPPH assay method. Results of the assay performed have been presented in Table 12.

The results have been expressed as mean ± SEM (n=3). 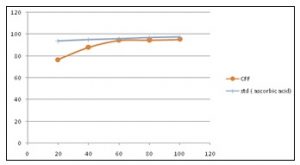 FIG. 1: RADICAL SCAVENGING ASSAY OF STANDARD AND CFF FROM LEAVES OF M. PARVIFOLIA

The model of scavenging the stable free radical DPPH is a widely used method for estimating antioxidant activity. DPPH is nitrogen centered stable free radical that, upon reaction with antioxidants undergoes conversion from 2, 2’-diphenyl-1-picrylhydrazyl to 2, 2’-diphenyl-1-picrylhydrazine accompanied by a colour change from purple to yellow, resulting in a decrease in absorbance/color intensity of the reaction mixture which was measured spectrometrically. The percentage scavenging of DPPH radicals by the CFF was concentration-dependent, ranging from 95.16%±0.0008 at a concentration of 100mcg/ml Table 12. The IC50 values for the standard and CFF were < 20mcg/ml Fig. 1. The study results indicate that the free radical scavenging activity of CFF at a concentration of 100mcg/ml was found to be comparable to the standard.

Acute Model (Carrageenan Challenge): The result obtained from the carrageenan challenge have been presented in Table 13. Fig. 2 Paw thickness recorded in carrageenan challenge Carrageenan-induced paw edema is widely used to determine the acute phase of the inflammation and is characterized by biphasic events involving different inflammatory mediators. In the first phase (during the first 2 h after carrageenan injection), chemical mediators such as histamine, dextran and serotonin play role, while in second phase (3-4 h after carrageenan injection) Kinin and prostaglandins are involved 15. The present study results revealed that administration of CFF inhibited the edema starting from the first hour and during all phases of inflammation, which probably leads to inhibition of different aspects and chemical mediators of inflammation. The CFF showed a significant level of anti-inflammatory activity in a dose-dependent manner. The CFF at doses of 50, 100, 200 mg/kg showed a significant decrease in paw thickness. The maximum inhibitory effect of the CFF was recorded at the dose level of 200mg/kg (51.21%) at 3rdh, whereas 46.34% and 48.78% at the dose levels of 50 and 100 mg/kg, respectively at the 3rd h. 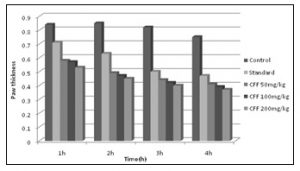 Sub-acute Model (Formalin Challenge): The results shown by CFF in this model have been presented in Table 14, Fig. 3 Paw thickness recorded in formalin challenged animals. This sub-acute model is based upon the ability of the test drug to inhibit the edema produced in the hind paw after injection of formalin.

The nociceptive effect of formalin is biphasic. There is the release of histamine, 5-HT, and kinin in the first phase, while the second phase is related to the release of prostaglandins 16.

The CFF showed a significant level of anti-inflammatory activity in a dose-dependent manner. The CFF at 50, 100, 200 mg/kg doses showed a significant decrease in paw thickness. The maximum inhibitory effect of the CFF was recorded at the dose level of 200mg/kg (29.03%) at 3rdh. In contrast, a percentage inhibition of 20.96% and 22.58% were found to exist at the dose levels of 50 and 100 mg/kg respectively at the 3rd h. 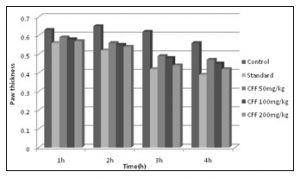 FIG. 3: EFFECTS OF ADMINISTRATION OF CFF OF M. PARVIFOLIA IN FORMALIN CHALLENGED ANIMALS

CONCLUSION: The antioxidant activity of CFF has been carried out. CFF was subjected to the DPPH model; it showed 95.16% of % scavenging activity at concentration of 100mcg/ml in a concentration-dependent manner. The anti-inflammatory activity in flavonoids (CFF) of M. parvifolia leaves has been studied first time by using acute (Carageenan induced paw edema) and sub-acute (Formalin induced paw edema) models. This study shows that the CFF obtained from M. parvifolia leaves possesses a significant level of anti-inflammatory activity in a dose-dependent manner.

ACKNOWLEDGEMENT: The author thanks Dr. R.C. Roy (Principal) & Management of Global College of Pharmacy Khanpur Khui for providing the guidance and facility for the project.