ANTIOXIDANT AND ANTIARTHRITIC ACTIVITY OF ALLICIN IN ANIMAL MODELS

ANTIOXIDANT AND ANTIARTHRITIC ACTIVITY OF ALLICIN IN ANIMAL MODELS

ABSTRACT: Inflammation is common and essential protective response to the harmful stimuli such as infectious agents, antigen-antibody reactions, thermal, chemical, and physical agents, and ischemia. The oxidative stress is produced by free radicals, predominately reactive oxygen species (ROS), which cause tissue damage from oxidative stress. Antioxidants play an important role in neutralizing such free radicals. Research in recent decades has shown widespread pharmacological effects of A. sativum and its organosulfur compounds especially Allicin. Studies carried out on the chemical composition of the plant show that Allicin is an important constituent of the plant and is the most important alkaloid that is generally claimed to be responsible for their beneficial effects which is known to possess antioxidant and anti-arthritic activity. Hence an attempt was made to investigate its antioxidant and anti-arthritic potential.

INTRODUCTION: Inflammation is common and essential protective response to the harmful stimuli such as infectious agents, antigen-antibody reactions, thermal, chemical, and physical agents, and ischemia.  The classical key features of inflammation are redness, warmth, swelling, and pain. Inflammation cascades can lead to the development of diseases such as arthritis, chronic asthma, multiple sclerosis, inflammatory bowel disease, and psoriasis.  Rheumatoid arthritis and osteoarthritis are the major inflammatory diseases affecting people worldwide.  Disorders that affect the joints and their components—muscles, bones, cartilage, and tendons—are considered connective tissue diseases because these structures contain large amounts of connective tissues that can become inflamed during different autoimmune disorders like rheumatoid arthritis. 1

Persistent inflammation leads to joint destruction, but the disease can be controlled with drugs. Osteoarthritis, which is characterized by loss of joint cartilage that leads to pain and loss of function primarily in the knees and hips, affects 9.6% of men and 18% of women aged more than 60 years 2

Inflammation of the synovial lining leading to pannus formation is a characteristic feature of the disease. Untreated RA progresses to bone and cartilage damage in the joints leading to deformities and disability. Over the past decade, it has increasingly been recognized that inflammation can induce bone damage and that the two processes are linked via common mediators. These mediators include receptor activator of NF-κB ligand (RANKL) and its receptor RANK, proinflammatory cytokines (e.g., tumor necrosis factor-α (TNF-α), interleukin 1 (IL-1), IL-6, IL-17, and IL-18), and matrix-degrading enzymes (e.g., matrix metalloproteases (MMPs) and cathepsin K (Cat K)) 3

Analgesia (painkillers) and anti-inflammatory drugs, including steroids are used to suppress the symptoms, while disease-modifying antirheumatic drugs (DMARDs), newer therapies such as anti-tumour necrosis factor (TNF)-α therapy (etanercept, infliximab and adalimumab), anti-CD20 therapy (rituximab) and abatacept sulphasalazine, leflunomide, hydroxychloroquine, and corticosteroids like prednisolone, methylprednisolone are often required to inhibit or halt the underlying immune process. However, all of these agents are associated with numerous side effects 4.

The efficacy of steroidal and nonsteroidal drugs in the treatment of rheumatic diseases is now well established. However, both these groups of drugs are known to cause certain adverse effects notably peptic ulceration and in addition, steroidal drugs such as cortisone are known to cause several other undersirable adverse effects. Hence the need for a safer anti-inflammatory drug for such conditions has been visualised.

The oxidative stress is produced by free radicals, predominately reactive oxygen species (ROS), which cause tissue damage from oxidative stress. Free radicals are largely responsible for diverse diseases and disorders such as diabetes and related problems of ageing. The major defense against free radicals can be found in medicinal plants in the form of natural antioxidants. Antioxidants play an important role in neutralizing such free radicals 5.

Garlic (Allium sativum; Liliaceae) is one of important ingredients of Indian traditional medicine. Garlic has medicinal property and has been used in the treatment of several diseases for centuries. Pharmacologically, garlic has been suggested to be hypolipidemic 6, anticoagulant and anticancer 7. Several other reports also suggest effectiveness of garlic in exerting antigenotoxic, anticlastogenic effects by modulating oxidative stress 8.

Garlic is a source of various biologically active phytomolecules, including organosulfur compounds, phenolic acids, allyl thiosulfinates, flavonoids, and vitamins. The health properties of garlic depend on its bioactive compounds and especially on phenolic compounds which have interesting pharmacological properties, are present in relatively high amounts. Many researches have been conducted to assess the dietary role of polyphenolic substances, and their characteristics, metabolic pathways, and biological effects, so garlic has been widely used to scavenge Reactive oxygen species (ROS)  and treat a variety of diseases including heart disease and cancer. 9 Garlic and its constituents prepared by various means have been shown to have diverse biological activities, including anticarcionogenic, antiatherosclerotic, antithrombotic, antidiabetic, and various other biological actions 10, 11

Research in recent decades has shown widespread pharmacological effects of A. sativum and its organosulfur compounds especially Allicin. Studies carried out on the chemical composition of the plant show that the most important constituents of this plant are organosulfur compounds such as allicin, diallyl disulphide, S-allylcysteine, and diallyl trisulfide. Allicin represents one of the most studied among these naturally occurring compounds.

In pharmacological research, there is a lot of evidence about a wide spectrum of pharmacological effects of A. sativum and its active compounds with low toxicity. Studies carried out on the chemical composition of the plant show that sulfur compounds such as Allicin are important constituents of the plant 12 and is the most important alkaloid that is generally claimed to be responsible for their beneficial effects.

Allicin containing diallylsulphide and thiosulfinate that are highly effective against major foodbornA`e pathogens 13, 14. Allicin is readily membrane-permeable and undergoes thiol-disulphide exchange reactions with free thiol groups in proteins. Allicin ((R, S)-diallyldisulfid-S-oxide), one of the sulfur compounds from garlic, is formed by the action of the enzyme alliinase on alliin. It possesses antioxidant activity and is shown to cause a variety of actions potentially useful for human health15. Allicin exhibits hypolipidemic, antiplatelet, and procirculatory effects. Moreover, it demonstrates antibacterial, anticancer, and chemopreventive activities. Hence this study was undertaken to evaluate antiarthritic and antioxidant potential of a very important compound allicin.

Allicin was purchased from Sigma laboratories, Mumbai. The stock solution was prepared by dissolving allicin in ethanol at a concentration of 10 mg/ml. It was diluted to 1 mg/ml with phosphate buffered saline (PBS) before use. For animal experiment, albino rats were randomly divided into three groups. Allicin was orally administered by gavage at a dose of 100 mg/kg.

(Hanson et al., 1974) Albino rats of either sex weighing between 120-160 gms were used and divided into three groups of six each. One of the groups served as control and the other two groups served as the drug treated groups. The control group received 2% plain gum acacia suspension orally (without drugs) only, while the other two groups received piroxicam & Garlic powder respectively, in the dose of 100 mg/Kg body weight, in 2% of gumacacia suspension, by mouth; joint oedema was provoked by injection of 0.01 ml turpentine oil into the synovial cavity of the right knee joint one hour after the administration of gum acacia and drugs, in the control and drug treated groups respectively. (Hanson et al., 1974).

Here the parameter for assessment is the lateral diameter of the knee joint and accordingly knee joint lateral diameter was measured by using screw gauge immediately after the injection of turpentine oil in to the knee joint cavity (Zero hour reading) and after six hours). Thus the mean increase in joint diameter in the control group was compared with that in the drug treated groups.

The DPPH assay method is based on the reduction of DPPH, a stable free radical. The free radical DPPH with an odd electron gives a maximum absorption at 517 nm (purple color). The plant extract will be mixed with 0.8 ml of 10% TCA and will be centrifuged for 5 mins at 3000 rpm, supernatant obtained will be taken for test where, control, standards and tests are taken which will be mixed well and incubated at room temperature in dark for 30 mins , then OD readings will be taken at 536 nm range in spectrophotometry.

Superoxide dismutase (SOD) (Marklund & Marklund - 1974): Pyrogallol auto oxidizes rapidly in aqueous solution at a faster rate with higher PH (8.0) to produce several intermediate products.The inhibition of auto oxidation brought about by addition of enzyme is evaluated at early stage as an increase in absorbance at 420nm and expressed as  units/min/mg of tissue protein. Glutathione peroxidase (GPx) (Rotruck et al., 1973): GBH is converted to GSSG in presence of GPx and the colour developed was read at 412nm using spec and expressed as glutathione oxidized/min/ mg/protein.

Catalase (Sinha 1972): Dichromate in acetic acid is reduced to chromic acetate when heated in presence of H2O2 resulting in formation of per chromic acid as an unstable intermediate. The Chromic acetate measured using spec at 570nm and expressed as µmoles of H2O2 utilised/min/mg/protein (Table 2 about here). 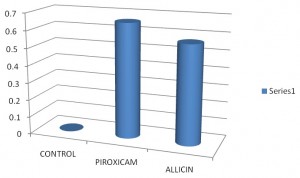 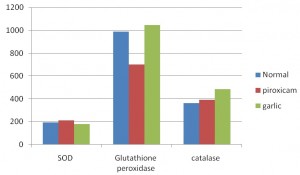 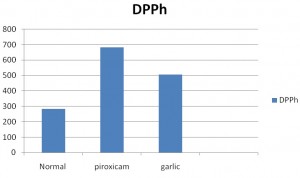 Incidentally, Garlic has been reported to confer manifold therapeutic benefits in indigenous system of medicine (Ayurveda).  In fact, garlic is being marketed for its antihyperlipidaemic property. Several other uses of garlic such as antirheumatic, anthelmintic, antiflatulent, digestant carminative, topical antiseptic, rubefacient, anti-fungal and antibacterial have also been highlighted.

Accordingly, in the light of these developments, garlic powder has been investigated in this study for its anti-inflammatory and antioxidant potential and its activity has been compared with that of the established anti-inflammatory drug, piroxicam.

Turpentine also has been employed as a phlogistic agent for producing experimental inflammation over the years and accordingly, the method described by Hanson et al., 1974 used herein, involves the intra-articular injection of turpentine in the rat knee-joint. The criterion for determining the anti-inflammatory potential is the comparison of the increase in the lateral knee joint diameter in the control and drug treated groups.

In this current study, the lateral knee joint diameter has been measured with the help of an instrument known as “screw gauge”.

Interestingly, in this model the anti- inflammatory activity of both piroxicam and garlic powder is of a high order and the “P” values of the results obtained have been found to be statistically significant.

Oxidants and antioxidants play an important role in maintaining balance between free radical produced by metabolism or derived from environmental sources and antioxidant system of the body. Deficiency of dietary antioxidants enhance oxidative damage. Antioxidants are commonly found in medicinal plants are potent and safe due to their harmless nature and have been reported to have multiple biological effects. Among medicinal plants, the plants of genus Allium are known to very useful for their therapeutic potentials. Superoxide is dramatically increased during stressful condition.

This superoxide is one of the main reactive oxygen species in the cell which are chemically reactive molecules containing oxygen also increased. This significant decrease of SOD may result in damage to cell structures and thus causes oxidative stress. The function of the SOD is converting superoxide radicals into hydrogen peroxide which is effective

in ROS scavenging by the reaction of CAT and GPx.

In this study allicin has brougt about significant increase in these reactive oxygen species including superoxidase dismutase, catalase and glutathione peroxidase and also DPPH enzyme which was statistically significant compared to control and also comparable to standard drug Piroxicam.  Thus the present study clearly indicates that the active constituent of Allium sativum (garlic) which is Allicin has exhibited significant anti-arthritic activity in vivo in albino rats and also significant antioxidant activity in vitro via the enzymes superoxidase dismutase, catalase and glutathione peroxidase and also via DPPH enzyme.