ABSTRACT: The main aim of the present study was to synthesize new leads with potential antibacterial and antioxidant activities. As a part of systematic investigation of synthesis and biological activity, some of the new thiazoldinedione compounds 5a-e were prepared and screened for their antibacterial and antioxidant activities. The antibacterial evaluation of newly synthesized compounds was carried out by cup-plate method. Antimicrobial activity results revealed that compound 5a showed promising activity against bacteria Staphylococcus aureus, Klebsiella pneumonia, and Pseudomonas aeruginosa, 5e was found to be more active aganist Proteus vulgaris. The antioxidant activity was performed by using free radical scavenging activity by DPPH (1, 1-diphenyl-2-picryl-hydrazil) assay method and Ferric ion reduction method, ascorbic acid was used as reference standard. All the tested derivatives show antioxidant activity but compound 5c and 5d show promising antioxidant activity concentration at 50μg /ml and can be further studied with modifications. Some novel thiazolidinediones derivatives 5(a–e) were synthesized by reacting hydrazine hydrate in ethanol to form hydrazinecarboxylicacid [4-(2, 4-Dioxo-thiazolidin-5-ylidenemethyl)-phenyl-esterand substituted derivatives were formed by further reaction. The target molecules have been characterized by IR, 1H NMR, 13C NMR, and mass spectral studies.

INTRODUCTION: The emergence and spread of antimicrobial resistance have become one of the most serious public health concerns across the world1. Thiazolidinone, a saturated form of thiazole with carbonyl group on fourth carbon, has been considered as a magic moiety (wonder nucleus) because it gives out novel derivatives with different types of biological activities. This diversity in the biological response profile has attracted the attention of many researchers to explore the potential biological activity, such as antibacterial2, antifungal 3, and antioxidant 4, 5 activities of this skeleton.

In the present study, an attempt was made towards the incorporation of various substituents into hydrazine moiety of thiazolidinediones, to probe how this moiety will influence the antibacterial activity and antioxidant activities.  In view of all these valid observations and as a continuation of our work, prompted us to synthesize new thiazolidinedione derivatives and the synthesized compounds were screened for their antibacterial and antioxidant activity6.

The chemicals used in the present project work were purchased from Rankem, Merck and Spectrochem. The melting point of the synthesized compound was determined by open capillary with Thiel’s melting point tube (capillary tube method). TLC plates were prepared by using Merck Silica Gel 60 GF 254. Visualization was done in UV light chamber at 254 nm, iodine chamber.

The IR spectra of the synthesized compoundwere recorded on a Fourier Transform Infra Red spectrometer (model Shimadzu 8400 S) in the range of 400-4000 cm-1 as KBr pellets. (1H NMR) data of the compound was carried out in Bruker 200 spectrospin NMR at Astra Zeneca Pharma India Limited, Bangalore and Bruker 400 spectrospin NMR at Indian Institute of Science, Bangalore. The solvent used for NMR was CDCl3. 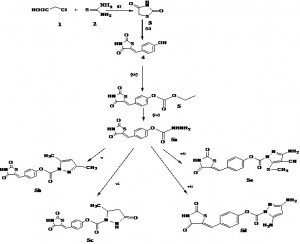 A mixture of 5 - (4-hydroxybenzylidene) thiazolidine - 2, 4-dione (0.05 mol) and Anhydrous K2CO3 (0.1mol) in excess of Dry Acetone (100ml) was stirred at reflux temperature for 4h. To stirred suspension mixture of Ethylchloroformate (0.05mol) in dry Acetone was added in a drop wise manner over a period of 30 min at reflux temperature, and the refluxing continued for 6h. After keeping the reaction mixture over night, the excessof solvent was removed to get the solid. The solid was re-crystallization from Acetone.

To a suspension of [4-(2, 4-Dioxo-thiazolidin-5-ylidenemethyl)-phenyl-ester ethyl ester (0.01mol) in 40 ml Ethanol 0.015 mol of Hydrazine hydrate was added and the reaction mixture was refluxed for 2h. The resulting mixture was allowed to cool and filtered. The solid obtained dried and re-crystallization with hot water.

A mixture of 5 - (4-hydroxybenzylidene)thiazolidine-2,4-dione (0.05 mol) and anhydrous K2CO3 (0.1mol) in excess of dry Acetone (100ml) was stirred at reflux temperature for 4h.To stirred suspension mixture of Ethylchloroacetate (0.05mol) in dry Acetone was added in a drop wise manner over a period of 30 min at reflux temperature, and the refluxing continued for 6h. After keeping the reaction mixture over night, the excessof solvent was removed to get the solid. The solid was re-crystallization from Acetone.

To a suspension of [4-(2, 4-Dioxo-thiazolidin-5-ylidenemethyl)-phenoxy]-aceticacid ethyl ester (0.01mol) in 40 ml Ethanol 0.015 mol of Hydrazine hydrate was added and the reaction mixture was refluxed for 2h. The resulting mixture was allowed to cool and filtered. The solid obtained dried and re-crystallization with hot water.

Antibacterial activity of the synthesized compounds was determined, using a slightly modified cup plate method. Muller Hinton agar was used for the growth of bacterial strains Bacterial strains such as gram-positive (S. aureus and B. subtilis) and gram-negative (E.coli & Proteus vulgaris). Each organism was suspended in normal saline solution and transmittance (T) of 75 to 77% at 530 nm was made, which is equal to 106 CFU/ml.

All the test compounds were dissolved in DMSO at a concentration of 1 mg/ml. Each plate was inoculated with 20 μl of microbial suspension. 100 μl of the test compounds was added to each cup. The plates containing bacteria were incubated at 370C for 24 hrs, the positive antimicrobial activity were read based on the growth inhibition zone and compared with amoxicillin drug, as shown in Table4.

Free radical scavenging activity by DPPH assays method: DPPH (1, 1-diphenyl-2-picryl-hydrazil) is stable free radical. Methanol solution of DPPH is used to evaluate the antioxidant activity of several synthetic compounds. Antioxidant on interaction with DPPH, both transfer electron or hydrogen atom to DPPH, thus neutralizing its free radical character and convert it to1, 1-diphenyl-2-picryl hydrazine. The degree of discoloration indicates the scavenging activity of the drug .The change in absorbance produced at 517 nm has been used as measure of its antioxidant activity.

Preparation of DPPH solution: It was prepared by dissolving 33 mg of DPPH in 1 lit. Of methanol just before use and kept in dark amber colored bottle to protect from sunlight.

Preparation of stock solution of ligands:

It was prepared by dissolving 50 mg of ligand in 100 ml of methanol.

It was prepared by dissolving 50 mg of ascorbic acid in 100 ml of methanol.

A 10, 20,30,40,50 μg/ml concentrations of ligands and ascorbic acid were prepared. From this stock solution 1ml has been pipette out and 5ml methanol solution of DPPH was added ,shaken well and the mixture was incubated at 370C for 30 minute absorbance of all samples were measured against blank at 517 nm. The absorbance of DPPH reagent alone was taken as control.

The % radical scavenging activity can be calculated following formula:

The reaction mixture containing 1, 10-o-phenanthroline (0.5 mL), ferric chloride 1mL (0.02 mM) and test compound (solution of different concentration of synthesized compounds and ascorbic acid as standard drug) in a final volume of 5 mL with methanol was incubated for 15-20 min at ambient temperature and absorbance was measured at 510 nm. In another set, sodium dithionate (0.3 mM) was added instead of the compounds and absorbance was taken as equivalent to 100% reduction of all the ferric ions present.

Anti-oxidant activity by ferric ion reduction method can be calculated by the following formula:

Where, As = absorbance by standard drug solution at 510 nm.

At = absorbance by the sample solution at 510 nm.

The structure of new compounds prepared during present investigation has been authentically established by their UV, IR and 1H NMR. In following reaction the spectral studies of some selected compounds have been dealt.

The synthesis of scaffold TZD (3) was done by refluxing Thiourea, Monochloroaceticacid and Con HCl. Which was proved by comparing observed m.p with literature m.p. IR (Figure 1) showed prominent carbonyl strechting at 1775.50 cm-1, 1739.99 cm-1. Further proof was obtained from 1H NMR spectra (Figure 10) which clearly shows two singlets at 4.31 and 11.98 indicating the presence of –CH2 and –NH. Further substitution reaction with 4-hydroxybenzaldehyde leads to 5 - (4-hydroxybenzylidene) thiazolidinediones. The formation of compounds were confirmed by visualizing agents (2, 4 DNP, Phosphomolybdicacid) and IR , which shows vinylic –CH stretching at 1664.31 cm-1 and 1562.91 cm-1 (Figure 2).

The phenolic benzylidene intermediate was subjected to reaction with Ethylchloroformate and Ethylchloroacetate, Anhydrous K2CO3, Dry acetone with guard tube to obtain esters 5. The IR (Figure 3  and 7) spectrum showed at 1442 cm-1  due to CH3 str, 1654 cm-1 due to C=O str (carbonyl). This was then made to react with Hydrazine hydrate using ethanol as solvent to get respective hydrazino derivatives 5a.

All the tested derivatives show antioxidant activity but compound 5c and 5d show promising antioxidant activity concentration at 50μg /ml and can be further studied with modifications. In general, most of the compounds showed significant antibacterial activity but some compounds are more specific to particular strains of bacteria. From the biological data, it was evident that the compound 5a was found to be more active against Staphylococcus aureus, Bacillus subtillus and E-Coli and 5e was found to be more active aganist Proteus vulgaris.

However theantimicrobial activity of the synthesized compounds againstthe tested

organisms was found to be less than that ofrespective standard drug at tested dose level.  In future studythe activity of the compounds may be manipulated byintroducing unsaturation or heterocyclic ring at C2 ofthiazolidinediones. 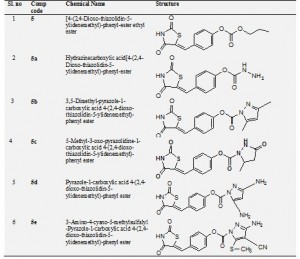