ABSTRACT: Vitex negundo is an Indian medicinal plant used to cure several diseases such as asthama, fever, headache, cancer and many other diseases. This study aims to determine the antioxidant potential and anti-proliferative activity of Vitex negundo methanolic leaf extract. Isolation of bioactive compounds involved liquid-liquid extraction of methanolic leaf extract by petroleum ether and chloroform. The total antioxidant potential of the extracts was determined using phosphomolybdenum, 2,2-Diphenyl-1-picrylhydrazyl (DPPH), Ferric oxide reducing power (FRAP) and Nitric Oxide methods. It was observed that the crude and chloroform extracts had good antioxidant activity. The antileukemic activity of the chloroform extract was tested on HEL92.1.7 and Jurkat cell lines (Acute lymphoblastic leukemia derived) by cytotoxicity assay (MTT). The plant extracts exhibited poor cytotoxicity against the erythroid cell lines but showed good cytoxicity on Acute lymphoblastic leukemia cells. This study shows that the chloroform fraction of V negundo leaf has both antioxidant and antileukemic activity.

INTRODUCTION: In the 20th century, cancer is the second cause of mortality all over the world of which Leukemia contributes to 53% of all cancers 1. Acute lymphoblastic Leukemia (ALL) is an acute form of leukemia which is prevalent in children. Acute Erythroid leukemia (AEL) is a rare form of Acute myeloid leukemia (AML) which mainly affects adult population. It accounts for 5% of AML 2 with proliferation of abnormal erythroids, myeloblasts and megakaryocytes. Since chemotherapy treatment with allopathic drugs causes severe side effects there is a need for natural products which will be cost effective and have less side effects.

Herbal and natural products have been used as folk medicines since centuries. Presence of various secondary metabolites in plants has paved way for isolation of compounds of pharmaceutical importance 3. Various parts of the plants such as roots, barks, stem, leaves, fruits and seeds have been used to treat various ailments.

Oxidative stress due to life style and pathological conditions is associated with various diseases like cardiovascular, cancer and other chronic diseases. Oxidative stress generates lot of reactive oxygen species which includes free radicals such as super oxide, hydrogen peroxide and nitric oxide 4. Isolation of antioxidant and anticancer phytochemicals to treat several ROS related diseases such as cancer and other diseases is increased in recent years and this in turn has lead to the discovery of new pharmaco-therapeutic agents 5, 6. Vitex negundo, also known as the Chinese Chaste tree is classified under the kingdom Plantae and is a member of the Verbanaceae family. This family consists of 250 species in which most of them have medicinal value 7. It is a woody, aromatic shrub commonly found throughout the Indian subcontinent on riverbanks, moist localities and deciduous forests. The shrub grows to 2- 4m in height. Vitex negundo has been used to cure several ailments such as asthama, cancer, fever, head ache, wounds, antidote for snake bite, Rheumatism etc., 8 Vitex negundo leaf extract is known to be rich in iridoid glycosides, isomeric flavones, flavonoids and terpenoids 9. Therefore the total phenolic content and flavonoids of this plant extract is a good measure of its antioxidant and anti-tumour effects  10. Vitex negundo is also a source of natural antioxidants 11.  Recently studies have proved that the ethanolic extract of Vitex negundo  increased the activities of antioxidant enzymes in normal embryonic liver cells (WRL68) including, superoxide dismutase (SOD) and glutathione peroxidase (GPX) 12 .

Folk medicine from Andhra Pradesh and Phillipines suggest the use of Vitex negundo against cancer. Ethanolic extract of Vitex negundo has increased the life span of mice having EAC tumours by reducing the number of tumour cells. Recent studies have also shown that the extract can be used as chemopreventive agent 13. Lignan compound EVn-50 isolated from Vitex negundo has broad spectrum cytotoxicity by arresting cancer cell lines at G2/M phase cell cycle 14. The present study is an attempt to determine the antioxidant and antileukemic effect of Vitex negundo leaf extract.

Plant collection was done during the winter months of January- February, 2013 from, Atibele, Annekal, Karnataka. Authentication was done by Prof. Srinath, Department of Botany, Bangalore University. The leaves were washed under running water and dried with starch-free muslin cloth. The uninfected leaves were spread on a clean sheet and shade dried for 10 days. After shade drying the leaves were dried in hot air oven for 10 hours at 35°C. Dried leaves were coarsely powdered using conventional mixer(650W).

Total phenolic content of the extracts (crude, petroleum ether and chloroform) was estimated by Folin ciocalteu method 17. 100 μl of diluted plant extract and different concentrations of the standard (20 - 100μg) were taken in different test tubes. Total volume was made upto 1ml with methanol. 2.5ml of FCR reagent was added and were incubated at room temperature for 5 minutes. 2ml of sodium carbonate and 5ml of distilled water was added to each test tube. After 15minutes of incubation OD was read at 670nm using UV spectrophotometer. Gallic acid was used as standard. Methanol was used as blank.

The total antioxidants in the extracts (crude, petroleum ether and chloroform) fractions were determined by Phosphomolybdenum method 18. Diluted plant extracts and different concentrations of standard (10 – 50 μg) were taken in different test tubes. Final volume was made upto 0.5ml with distilled water. 2.5ml of the reaction mixture which contained 0.6M sulphuric Acid, 28mM sodium phosphate, 4mM ammonium molybdate was added and incubated at 95ºC for 60 minutes. 5ml of distilled water was added to all the test tubes after cooling and absorbance was read at 670nm using UV spectrophotometer. Ascorbic acid was used as standard. Distilled water was used as blank. Antioxidant capacity was expressed in μg AAE/ml.

Ferric reducing antioxidant power (FRAP) assay: The total antioxidant capacity of the extracts was measured by FRAP assay 19. 100 μl of diluted plant extracts and between 20 – 100 μg of different concentrations of the standard were taken in separate test tubes. 2.5ml of 0.2 M phosphate buffer (pH 6.6) and 1% potassium ferric cyanide was added and incubated at 50ºC for 20min. The reaction was stopped by adding 2.5ml of 1% trichloroacetic acid and centrifuged at 3000rpm for 10minutes. To 2.5ml of the supernatant, 2.5ml of distilled water  and 1ml of 0.1%  FeCl3 was added and incubated at room temperature for 30 minutes. Absorbance was read at 700nm. Gallic acid was used as standard. Distilled water along with other ingredients was used as blank. Antioxidant capacity of the extract were expressed in terms of µg/ml Gallic acid equivalence per ml.

The scavenging activity of the extracts (Crude, petroleum ether and chloroform) was measured by Nitric Oxide assay 20. 100 μl of diluted plant extracts and 20 – 100 μg of different concentrations of the standard were taken in separate test tubes. 2ml of 10mM Sodium nitroprusside and 0.5ml of Phosphate Buffer Saline was added to the test tubes and incubated for 2hrs and 15 minutes at room temperature. 1ml of sulphanilic reagent (0.33% of Sulphanilic Acid is prepared using 20% Glacial Acetic Acid Reagent) was added and incubated for 5minutes at room temperature followed by the addition of 0.1% of Naphthylene Diamine Dihydrochloride (NEDD) reagent. It was further incubated for 15 minutes at room temperature. Ascorbic acid was used as standard. Distilled water was used as blank. Absorbance was read at 540nm. Percentage scavenging activity was calculated using the formula:

Free radical scavenging capacity was measured by DPPH method 21. Various concentrations of the standard (100 -500 μg) and 100 μl of diluted extracts were taken in test tubes. Volume was made upto 150 μl and equal volumes of DPPH solution was added. It was incubated at room temperature for 15 minutes in a rotary shaker followed by the addition of 3ml methanol. Absorbance was read at 570nm. Ascorbic acid was used as standard. Methanol and DPPH mixture was used as control. Methanol alone was used as blank. Percentage scavenging activity was calculated using formula:

HEL.92.1.7 (erythroid leukemia cell line) and Jurkat cells (Acute lymphoblastic Leukemia cell line) were cultured in ATCC formulated RPMI 1640 medium. Cell lines were procured from ATCC. All cell lines were incubated in CO2 incubator having 5% CO2 and subcultured as needed (ATCC Guide). The viability of cells were assessed using MTT assay 22. 200 μl (1 X 105 cells/well) were seeded to each well of 96 well microtitre plate and incubated for 24hrs at 37oC, 5 % CO2 incubator. Different two fold varied concentrations of the  chloroform extract were incubated ranging from 0-320 μg/ml (0, 5, 10, 20, 40, 80, 160 and 320 μg/ml) for 24hrs at same conditions. 96 well plate was centrifuged at 2000rpm for 5mins after incubation and supernatant was discarded carefully. MTT dye was added to the well and further incubated for 3 - 4hrs. After incubation MTT reagent was discarded without disturbing cells and DMSO was added quickly to solubilise formazan. Absorbance was measured at 590nm. The wells containing 1% DMSO was treated as blank. The 50% inhibition concentration (IC50) of the extract was determined using graph pad prism software. Inhibition of cell growth was determined by the ability of the remaining viable cells to convert yellow dye MTT to purple coloured formazan. The cytotoxic ability caused by the plant extracts at the lowest concentration by 50% in treated compared to untreated culture was compared for their activities. 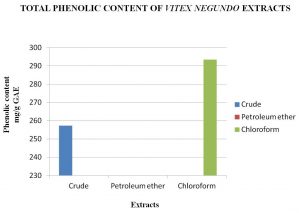 The scavenging activity for crude, chloroform and petroleum ether fractions was estimated by DPPH assay. The results are shown in the Fig. 2. The IC50 value was high in chloroform fraction (330μg/ml) compared to the crude fraction. The above result clearly states that  the crude extract has good scavenging activity compared to other extracts. Earlier studies have reported that the DPPH inhibitory activity of Vitex negundo was 69.82 ±2.99% at a concentration of 50mg/ml 23. This value is in agreement with the results obtained from this study. Shah et al  have reported  IC50 values of methanolic crude extract and chloroform extract as 23.4 and 51.3μg/ml respectively which further substantiates our results 24. Petroleum ether fraction did not have scavenging ability. 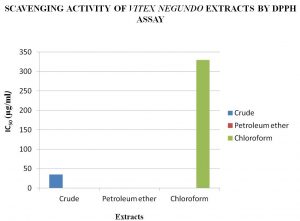 The total antioxidant capacity was estimated by phosphomolybdenum method. The results are shown in Fig.3. Crude and chloroform extract have shown very good antioxidant potential. The chloroform fraction showed greater than 50% activity indicating that it is a potent antioxidant 25. The petroleum ether fraction had activity that was slightly greater than 50% and had a value of 56.67%. Studies 11 have reported that the methanolic crude extract had 341.66±13.60 mg/AAE g dry wt. The present study showed that the crude extract had higher antioxidant potential when compared to their study. 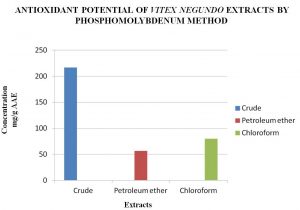 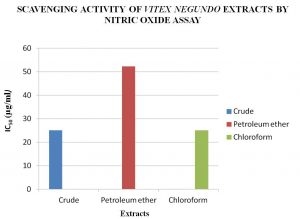 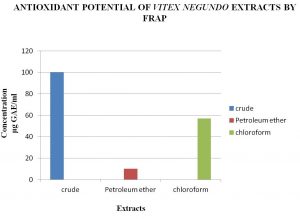 The present study reports that the methanolic  and the chloroform leaf extract are a  good source of antioxidants. Petroleum ether fraction has not shown good antioxidant activity except in nitric oxide and phosphomolybdenum assay.

In vitro cytotoxicity  assay (MTT assay) of chloroform extracts of Vitex negundo against Jurkat cell line  in a dose dependent manner is shown in graph 1 and 50 percent inhibition (IC50) was 291.5 μg/ml (Table 1). The same chloroform fraction had less cytotoxic effect against HEL.92.1.7 (data not shown). Methanolic crude extract had maximum cytotoxicity (48.14±0.92 %) against THP-1 leukemia cell lines according to the studies of 11 . In the present study chloroform fraction which had good antioxidant activity was not effective on HEL.92.1.7 but was effective against jurkat cells (ALL derived).  Studies done by 11 used crude extract against acute monocytic leukemia cell lines. Recently, studies on antiproliferative effect of methanolic leaf extracts of Vitex negundo on seven different cell lines (but not leukemia) 28 had very good antiproliferative effect on MDA-MB-231 with IC50 values 65.38 μg/mL.  The present study suggests that the chloroform fraction has antileukemic activity. 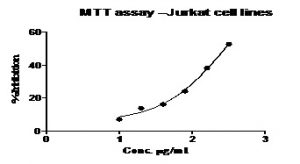 Our preliminary studies have shown that chloroform fraction of Vitex negundo leaf extract has good cytotoxic effect on acute lymphoblastic leukemia cell lines. Further purification of the chloroform  fraction might result in a single compound with a good antiproliferative effect.

ACKNOWLEDGEMENTS: We would like to acknowledge PES Institute of Technology, Bangalore for providing the facility and funding to carry our research work. We would also like to thank Dr. Mohan, Dr. Lakshman, and Dr. Muruganathan, PES pharmacy college, Bangalore for their continuous help and guidance.