INTRODUCTION: The word pectin is originated from the Greek language which means curdled or congealed. Pectin is present in the primary cell wall and middle lamella of higher plants 1. Chemically, structure of pectin belongs to heteropolysaccharide that is consisted of D-galacturonic acid, L- rhamnose, L-arabinose and D-galactose linked by 1, 4 glycosidic linkages 2. Continuously increased production of free radicals in the body can cause mutation in DNA which can lead to production of cancer cells 3.

The lack of antioxidants in the body also leads to other serious disorders such as CNS diseases (Alzheimer’s disease, Parkinson’s disease, and other neurodegenerative disorders), aging, rheumatoid arthritis, cataract; liver, lung and kidney disorders; and cardiovascular diseases 4.

Pectin is obtained from citrus peels and apple pomace on commercial scale. The pectin that serves many health beneficial roles in our body, has great economic value regarding its sources because it is also obtained from fruit waste as by-product of fruit juice industries 5. Considering the novel structure of pectin, it has been the part of interest for the researchers to explore the antioxidant and cytotoxic activities of pectin. Previously, antioxidant activity of citrus peels pectin, and apple pomace was determined by different methods like DPPH and ABTS methods 6.

Recently, other sources of pectin are also used for evaluation of its antioxidant activity, such as hot pepper pectin exhibited antioxidant activity 7. Pectin has also shown profound effect against cancer cells such as lung metastasis of colon cancer cell 8. Another recent research study exhibited the anticancer potential of apple pectin against most widely spread breast cancer. In this study, for in-vitro study, 4T1 breast cancer cells were studied while for in-vivo study, animal models were used 9.

One of the previous studies showed a correlation of rhamnogalacturonan with anticancer activity of pectin 10. Moreover, the modification in pectin structure by lowering esterification, lowering molecular weight as well as linear chain of galacturonic acids caused improved antioxidant property 11. Pectic polysaccharide from Korean Citrus Halabong was also investigated, and the resulted data concluded that these polysaccharides had activated the macrophages and NK cells and resisted lung metastasis of colon 26-M3.1 cells 8. The anticancer role of pectin, as well as its use as vehicle for cytotoxic drugs, were discussed in previous review article by Zhang and Zhang 10. In this article galectin-3 role was also highlighted for anticancer potential of modified pectin. Concerning the cytotoxic activity, shrimps were selected in some research work as they behave like mammalian cells. So the lethality to shrimps can be an effective tool to evaluate the cytotoxicity of a drug 12. Brine shrimps lethality bioassay is performed for the determination of cytotoxicity of test compound on a simple organism-brine shrimp for determination of toxicity of pesticides, heavy metals, medicines and particularly the natural plant extracts 13. The global world, especially under developing countries, is facing many ailments among which the most common are cancer and other diseases associated with lack of antioxidants in the body such as CNS, CVD and skin diseases. Thus, the present study aimed to investigate pectin for its antioxidant and cytotoxic activities concerning its natural and cost-effective source.

Extraction of Pectin: Pectin was extracted fromlemon and grape fruit peels with a little modification in the method followed by Siddiqui et al. 14 The fruits were washed with distilled water and then air-dried. Fruits were peeled off and cut into small pieces of about 1 cm with the help of knife. 200 g of each citrus fruit peels were weighed and dipped in 1000 ml of industrial methylated spirit (IMS) in beaker. Then these peels were boiled in water bath for 5 min. After that the solvent was decanted carefully. The boiled peels were then blended with 600 ml of distilled water for 30 sec. The loose slurry was obtained which was then boiled for 10 min on Bunsen burner. The mixture was left at room temperature to cool down. The pH was adjusted with the help of 0.1N hydrochloric acid solution. The mixture was then filtered with muslin cloth. Ethanol (95%) was added to the filtrate at the ratio of 1:3 to precipitate pectin. The precipitated pectin was filtered with the help of Buchner funnel. The beaker was weighed and then the pectin was transferred into it. The beaker was reweighed. The wet pectin was freeze-dried by tray dryer and the beaker was weighed again and yield was calculated for wet and dried pectin by the following formulae respectively.

The dried pectin from both citrus sources was sieved with mesh number 60 and then desiccated.

FTIR Spectral Analysis: The extracted citrus pectin (GP and LP) and the standard pectin samples were subjected for FTIR spectroscopic analysis. 1 g of each sample was ground and then through Smart Acr attachment, the samples were analyzed and scanned within the range of 4000-400 cm-1 15.

The whole experiment was conducted in three replicates. Finally, the treated solutions were analyzed at 700 nm and percentage reducing power was calculated for extracted and food grade pectin with reference of ascorbic acid as standard by the following formula.

At = Absorbance of the test sample

As = Absorbance of standard (ascorbic acid) at maximum concentration

Brine Shrimp Lethality Bioassay: The brine shrimp lethality bioassay was performed according to Rahman, Choudhary and Thomsen 16. 20 mg of standard and extracted pectin (LP and GP) was dissolved in 2 ml of distilled water to make solution of a concentration of 10 mg/ml. From each solution 5, 50 and 500 µl were transferred to different vials to make the concentrations of 10, 100, 1000 µg/ml respectively, and total of 12 vials was obtained. After 2 days when hatching of shrimps was taken place, 10 larvae were transferred to each vial with the help of Pasteur pipette in three replicates. The volume was made up to 5 ml with seawater. Then the solutions were incubated at 25-27 ºC for 24 h under illumination. The negative control was prepared by solvent only. After 24 h, number of survivors in each vial was counted by using magnifying glass. At 95% confidence of interval, LC50 was determined by Probit analysis. Etoposide (LC50 7.6425 µg/ml) was considered a positive control.

Statistical Analysis: The mean ± standard error mean of three replicates was determined by SPSS, version 22 and LC50 was determined at 95% of confidence of interval by Probit analysis using Minitab 17.

Yield of Extracted Citrus Pectin: The current study was designed to extract pectin from lemon and grapefruit peels by hot water extraction method using IMS for bleaching purposes. Previously, pectin was extracted at different pH from 1 to 7 14. In the current study pH was adjusted using 0.1 N solution of HCl. Table 1 shows the yield of pectin on wet and dry form. The yield of LP and GP on wet basis was 11.57% and 17.28% respectively; whereas on dry basis, the pectin yield was found 1.48% and 1.94%, respectively. The result showed highest percentage yield in case of GP both on wet and dry basis. In the previous study, percentage yield of LP was recorded as 16.71% and 2.76% whereas the percentage yield of GP was observed as 15.70% and 1.68% on wet and dry basis respectively 17. The variation in percentage yield among previous and current study may be due to different factors such as temperature, pH and duration of extraction 18, 19. Method of extraction and type of acid used also influence the yield of pectin from its source 20.

FTIR Spectral Analysis: The FTIR spectra of LP Fig. 1, GP Fig. 2 as well as of standard pectin Fig. 3 were comparatively studied and their important identified functional groups were observed.

The pectin structure may be changed during extraction, storage, and other processes, so exact structure determination is quite difficult 21. The spectra of the standard pectin as well as of tested extracted pectin showed peaks in the range of 3344.7 cm-1 to 3274.3 cm-1 representing sharp and strong stretching of O-H group indicating presence of hydrogen bond and carboxylic acid. 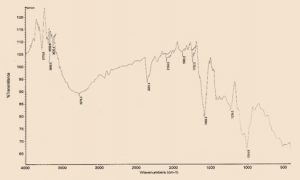 FIG. 1: FTIR SPECTRUM OF PECTIN FROM PEELS OF LEMON (LP) 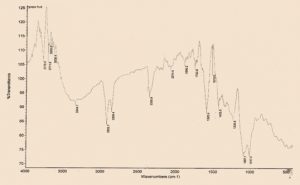 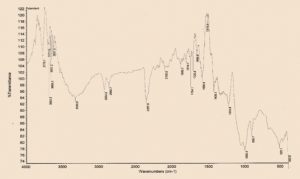 FIG. 3: FTIR SPECTRUM OF PECTIN FROM PEELS OF STANDARD PECTIN

The weak stretching of C≡C from 2105.8 to 2104.5 cm-1 showed alkyne group 22. All the spectra of extracted citrus pectin showed C=O group due to strong stretching from 1752.8 to 1752.3 cm-1 and the same type of peak is also represented by the spectrum of standard pectin at 1754.1 cm-1 which indicated the presence of carboxylic acid and esters.

The strong stretching of C-O appeared from 1238.9 to 1014.9 cm-1 showed the presence of carboxylic acid and ester group and also confirmed the pyrenoid ring structures in the tested extracted and standard pectin as observed in the previous study Xu, Tai, Wei, Yuan, Gao 7.

Antioxidant Activity: Fig. 4 represents the antioxidant activity of LP, GP and standard pectin in comparison of ascorbic acid (in terms of absorbance at 700 nm). It was observed that ascorbic acid showed highest absorbance compared to extracted pectin as well as from standard pectin which was found to be from 0.043 ± 0.002 to 0.158 ± 0.05. All the extracted pectin showed absorbance in increasing order with increase in concentrations from 10 to 100 µg/ml. 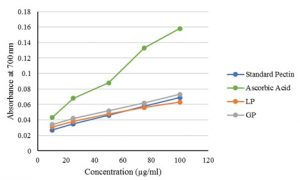 The percentage increase in reducing power was calculated for all the extracted and food grade pectin by taking absorbance of ascorbic acid at maximum concentration. 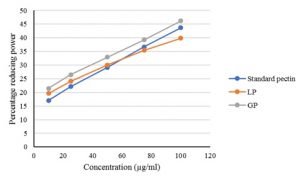 The positive results of the antioxidant activity of pectin by reducing power assay also supported through another study 7. The overall mechanism behind the reducing power assay is the donation of electron from the antioxidant which causes reduction of Fe+3/ferricyanide complex to ferrous form which causing Perl Prussian blue formation at 700 nm. The amount of Fe+2 formation can be monitored by this Perl Prussian blue formation 23. This complex formation was quantified in case of extracted as well as of standard pectin. All the solutions showed green color with Prussian blue shade. The favorable structure of pectin towards reducing power is due to the presence of abundant of -OH and -COOH groups 7.

Brine Shrimp Lethality Bioassay: Researchers have been working to further explore the toxicity of pectin against the tumor cells. Pectin has already shown toxicity against colon and breast cancer cells 8, 9.

The previous study also exhibited inhibition of galectin-3 response and cancer cell cycle arrest after treating with citrus and apple pectin 27. RG-1 part of pectin plays an important role in suppressing the galectin-3 dependent responses because of having short side chains of galectin 28. Another research data also confirmed the correlation of antiproliferative action of pectin with its RG-1 fragment. Whereas HG component of pectin and neutral sugars side chains also participate in the inhibition of cell proliferation. The immunostimulatory mechanisms of pectin play positive role against cancer cells due to enhancement of proliferation of lymphosides, implifying macrophage activity and increasing natural killer (NK) cells 29. All the extracted pectin (LP and GP) showed positive results concerning antioxidant activity and brine shrimp lethality bioassay.

CONCLUSION: Cancer and diseases causing due to lack of antioxidants in the body are widely spread all over the world. Thus, focusing on cost-effective and natural sources, the study was designed to investigate antioxidant and cytotoxic activities of pectin. Among lots of natural compounds, pectin is also proved for its anticancer and antioxidant activities. In current work, LP and GP exhibited antioxidant and cytotoxic activity by ferric reducing power assay and brine shrimp lethality bioassay, respectively. The results also showed that antioxidant activity of GP was higher than that of FGP and LP exhibited closed values to that of FGP. However, LP exhibited higher cytotoxicity than FGP and GP showed closed values to that of FGP. Further investigation is required for the confirmation of the observed results.

CONFLICTS OF INTEREST: All the authors have no conflict of interest in this study.