ABSTRACT: This study was subjected to investigate antioxidant and cytotoxic properties of ethanol and petroleum ether extracts of Borassus flabellifer Linn, expressed as BFA and BFP respectively. DPPH free radical scavenging method, total flavonoid, total phenol, total antioxidants and reducing power of the two extracts were assessed for antioxidant properties and cytotoxicity potentials were assessed by the brine shrimp lethality test. In DPPH test the lowest IC50 value was 32.59 mg/ml for BFA and highest was 1388.46 mg/ml for BFP and compared with standard ascorbic acid. In cytotoxicity test LC50 value was found 32.36 μg/ml for BFA and 616.59 μg/mlfor BFP. So alcohol extract is more potent than petroleum ether extract. The total Flavonoid contents of the test samples were 3.57 ± 1.26 and 17.41±1.89 mg/g quercetin equivalents for BFA and BFP respectively. The total phenol contents of the test samples were 707.08 ± 8.84 and 28.75 ± 6.48 mg/g galic acid equivalents for BFA and BFP respectively and also in total antioxidant assay BFA contains 0.68 ± 0.17 and BFP contains 527.38 ± 3.93 mg/g ascorbic acid equivalents. Borassus flabellifer may posses’ powerful antioxidant as well as good cytotoxic potential

INTRODUCTION: Oxidation is essential to many living organisms for the production of energy to fuel biological processes. However, oxygen-centered free radicals and other reactive oxygen species (ROS), which are continuously, produced in vivo, result in cell death and tissue damage. The role of oxygen radicals have been implicated in several diseases, including cancer, diabetes, cardiovascular disease and aging 1. Lipid peroxidation of fats and fatty acids in food not only results in their spoilage but is also a source of peroxyl and hydroxyl radicals that are associated with carcinogenesis, mutagenesis and aging 2, 3.

Therefore antioxidants that scavenge these reactive oxygen species and free radicals are of major importance in preventing the onset and progression of many diseases caused by oxidative stress. Synthetic antioxidants such as butylated hydroxyanisole (BHA) and butylated hydroxytoluene (BHT) are very effective and are used for industrial processing, but they may possess side effects and toxic properties that affect human health 4-6. The search for antioxidants from natural sources has received much attention and efforts have been put into the identification of compounds that can act as suitable antioxidants7.

Besides, phenolic compounds and flavonoids are also widely distributed in plants which have been reported to exert multiple biological effects, including antioxidant, free radical scavenging abilities, anti-inflammatory, anticarcinogenic etc 8. As crude extracts of herbs and spices and other plant materials, rich in phenolics are of increasing interest in the food industry because they retard oxidative degradation of lipids and thereby improve the quality and nutritional value of food. While, flavonoids are a group of polyphenolic compounds with known properties, which include free radical scavenging, inhibition of hydrolytic and oxidative enzymes and anti-inflammatory action 9.

Borassus flabellifer Linn of the Arecaceae family, locally called as Tal, English Name: Palmyra palm, is a tall tree attaining a height of about 30m, with a black stem and crown of leaves at the top; leaves are 0.9-1.5m in diameter, palmately fan shaped, petiole edges with hard horny spinescent serratures; flowers are unisexual, while male are spadix branched, female ar spadix simple; fruits are large, sub-globose drupes, on the greatly enlarged perianth. Trees can live upto more than 100 years. The rate of growth has been estimated at about 3 cm per year. This plant is widely distributed and cultivated in tropical Asian countries such as Thailand, Bangladesh, India, Myanmar, Sri Lanka, Malaysia, etc 10-12.

B. flabellider is used in folk medicine for multiple purposes, such as a stimulant, anti-laprotic, diuretic, antiphlogistic.  The fruits are stomachic, sedative, laxative and aphrodisiac in nature useful in hyperdipsia, dyspepsia, flatulence, skin diseases, heamorrhages, fever and general debility. The roots and juice of the plant are useful in inflammatory reactions. The ash obtained by burning the inflorescence is a good antacid antiperiodic, and is useful in heart burn, spleenomegaly and in bilious fever 13-14.

Studies on this plant have revealed the presence of several steroidal saponins 10-12, a polysaccharide 15, and a triterpenes 16. The fresh pulp is reportedly rich in vitamins A and C17 while the fresh sap is a good source of vitamin B-complex 18. Male inflorescence constitutes spirostane-type steroid saponins like borassosides and dioscin. It also contains 20 known steroidal glycosides19 and carbohydrates like sucrose20. Borassus flabellifer Linn. has been widely studied for its antidiabetic activity 19, 21.

Flowers of B. flabellifer were investigated for analgesic and antipyretic effects 22, anti-inflammatory activity, hematological and biochemical parameters 23-24, immunosuppressant property 16. Pellets of B. flabellifer Linn. showed a significantly reduced capacity to mount a delayed-type hypersensitivity (DTH)25 and flour from the young shoots of the B. flabellifer tested for mutagenicity 26, mitogenic activity 27, neurotoxic effect 28. Therefore, the present study evaluated the antioxidant and cytotoxic properties of the alcoholic (BFA) and petroleum ether (BFP) extract of B. flabellifer roots.

Collection and Preparation of the Plant material: The root of B. flabelifera was collected in March, 2011 from Jahangirnagar University, Savar, Dhaka, Bangladesh. The sample was identified by experts in Bangladesh National Herbarium, Mirpur, and Dhaka. The accession numbers is 37896.

Extraction of the Plant material: The fresh root was washed with distilled water, minced into small pieces; the tested materials were sun dried for seven days. Extraction was performed at room temperature. About 200 g of dried, ground plant material were soaked in 98% ethanol and petroleum ether for 48 h, stirring a sterilized glass rod, filtered, and the solvent removed in vacuum using a rotary evaporator at a temperature below 40°C. Extracts were stored in sample glass ware in the refrigerator prior to use.

The rate of mortality of nauplii was found to be increased in concentration of each of the samples. The median lethal concentration (LC50) was determined using the probit analysis method described by Finney 37, as the measure of toxicity of the plant extract.

DPPH Free Radical Scavenging Assay: The antioxidant activity of ethanol and petroleum ether extracts of root of B. flabellifer was determined by using the DPPH scavenging assay. The DPPH assay is often used to evaluate the ability of antioxidants to scavenge free radicals which are known to be a major factor in biological damage caused by oxidative stress. This assay is known to give reliable information concerning the antioxidant ability of the tested compounds 38.

The principle of the assay is based on the color change of the DPPH solution from purple to yellow as the radical is quenched by the antioxidant 39. The ethanol extract exhibited a significant dose dependent inhibition of DPPH activity, with a 50% inhibition (IC50) at a concentration of 32.59 mg/ml (Figure 1). The corresponding IC50 for petroleum ether extract was 1388.46 mg/ml.

Ascorbic acid which had been used as standard and had an IC50 value of 18.90 mg/ ml. 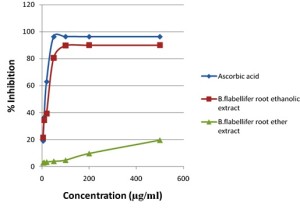 TABLE 1: TOTAL FLAVONOID AND TOTAL ANTIOXIDANT CONTENTS OF DIFFERENT EXTRACT OF B. FLABELLIFER

The Total Antioxidants capacity of different solvent extracts was evaluated by the phosphomolybdenum method and was expressed as ascorbic acid equivalents (AAE) per gram of plant extract. The total antioxidants capacity of the test samples were calculated using the standard curve of Ascorbic acid (y=0.0063x + 0.0983; R2=0.9904). The maximum total flavonoid (17.41±1.89 mg/g) was shown by petroleum ether extract of B. flabellifer L. and the minimum was shown by ethanol extract B. flabellifer (L.) (3.57 ± 1.26 mg/g). Total phenol content of the extract was evaluated by using Folin-Ciocalteu method and expressed as galic acid equivalent. Alcohol extract of B. flabellifer showed higher phenolic content of 707.08 ± 8.84 mg/g and petroleum ether extract showed minimum total phenol content of 28.75 ± 6.48 mg/g.

Different studies suggest that different types of polyphenolic compounds such as flavonoids, phenolic acids which are found in plants have multiple biological effects, including antioxidant activity 40. It is suggested that polyphenolic compounds have inhibitory effects on mutagenesis and carcinogenesis in humans, when up to 1 g was daily ingested from a diet rich in fruits and vegetables 41, 42.

Reducing Power: By using the potassium Ferricyanide reduction method, the reductive capabilities of the plant extracts was identified in comparison with ascorbic acid which demonstrated at figure 2. The reducing power of the extracts was moderately strong while increasing dose it shows little increment. 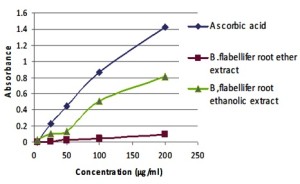 FIGURE 2: REDUCING POWER OF THE ALCOHOL AND PETROLEUM ETHER EXTRACT OF B. FLABELLIFER AND ASCORBIC ACID

Cytotoxicity Screening: In the present bioactivity study, the two crude extracts and pure compounds showed positive results indicating that the test samples are biologically active. The ethanol and petroleum ether extract of the dried bark of B. flabellifer were subjected to brine shrimp lethality bioassay following the procedure which has been utilized by Meyer et al., 1982. The results of the different extracts of B. flabellifer (% mortality at different concentrations and LC50 values) were shown in Table 2 and Figure 3.

Vincristine sulphate (VS) was used as positive control and the LC50 was found as 0.92 μg/mL. Compared with the negative control, VS (positive control) gave significant mortality and the LC50 values of the different extractives were compared with negative control. Each of the test samples showed different mortality rates at different concentrations, the percentage mortality increased with an increase in concentration. The variation in results may be due to the difference in the amount and kind of cytotoxic substances (e.g. tannins, flavonoids, triterpenoids, or coumarins) present in the crude extracts. The LC50 values of ethanol and petroleum ether were found to be 32.36 μg/mL and 616.59 μg/mL respectively (Table 2).

TABLE 2: LC50 VALUES OF THE TWO EXTRACTS OF B. FLABELLIFER AND STANDARD

CONCLUSION: In conclusion, it was observed from the present study that both ethanol and petroleum ether extract of B. flabellifer have significant natural antioxidants while ethanol extract of B. flabellifer has the potential cytotoxicity where the percentage mortality increased with an increase in concentration. But further pharmacological studies are required to be undertaken to understand the underlying possible mechanisms of the observed activities as well as need to isolate, purify, and characterize active phytochemicals responsible for these bioactivities.